Bryant Lamar Looney II, a professional MC known as Huey Briss, creates hard-hitting tracks about his life growing up in North Long Beach. The community that he remembers growing up in has changed, largely because many of the people he grew up with are now either dead or in prison.

Last month’s release of his newest single, “Grace Park Legend,” has propelled Briss into the “top albums of spring 2021” playlists, earning him spotlight plays on Apple Music and the accompanying music video amassing over 113,000 views on YouTube.

At first glance, the word “legend” in the song’s title may come across as an egotistical reference to himself, but Briss dismisses that. The word is actually used more to document the ghost stories of a community he no longer recognizes.

In “Grace Park Legend,” Briss speaks to his earlier life in his neighborhood, which stretched from “Del Amo to Artesia”—the streets on the south and north ends of North Long Beach.

Briss is a product of the old-as-time saying that Long Beach is a melting pot of cultures. His mother grew up in a mostly Muslim family. His father grew up in a Christian household where his grandmother taught him religious values.

As a child, Briss took part in water-balloon fights and attended parties at the Carmelitos housing complex. His childhood wasn’t that much different from any other kid growing up in Long Beach, but when he got older, the drama that had always surrounded him began to bleed into his daily life.

“The streets only have you up in jail or be dead,” Briss raps in his song, speaking to the hardships he had to live through, but it wasn’t always like that.

“When I was very naive and young, it was very fun,” he said. “Because we didn’t know anything going on. Then, it’s like, ‘I haven’t seen my friend in like six months.’ When I’m talking about North Long Beach, I’m talking about people that aren’t there. It’s like I’m talking to ghosts.”

In his teen years, Briss was exposed to gang activities that cost the lives of many of his friends down Atlantic Avenue, on the playgrounds of Grace Park, Jordan High School and along Long Beach Boulevard—just some of the places Briss raps about in his songs. 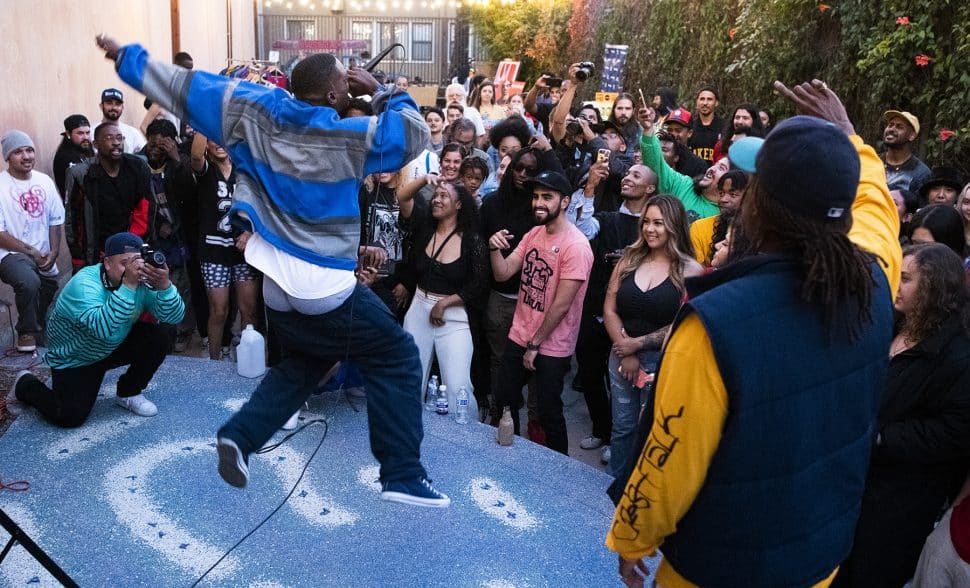 Huey Briss, left, joins Seafood Sam, right, on the stage during his performance at the East Village Arts Park during the East Village LB Artwalk in Long Beach Saturday, May 11, 2019. Photo by Thomas R. Cordova.

“Ninety percent of the people I grew up with are not even here,” Briss said. “They’re all in jail, but not because they’re bad people, but because they’re broke. What you want to do? Go to college? You never see nobody do that. You only want to be what you see, and you see everybody around you steal a car, you’re gonna steal a car.”

In another Grace Park Legend track, “Helicopter Pads,” Briss says the following: “Watching all my peers take charge of they careers / We’ve all been at it for years, now we’re finally here.”

The fact that he can make a career out of music after living through so much violence is a testament to Briss’ full departure from the North Long Beach of his youth.

Though he’s been making songs for a decade now, the 29-year-old rapper says he’s just getting started. Briss is aiming for a deluxe release of Grace Park Legend later this summer after already establishing a reputation alongside fellow North Long Beach MC and best friend Seafood Sam.

Briss has collected more than 30,000 monthly listeners on Spotify since he first put out an EP on the streaming platform in 2017.

Throughout the years, Briss’ message continues to be the same: work hard and trust in oneself. His advice to young artists coming out of Long Beach is to bet on themselves; as he puts it, “how are you going to have somebody bet on you if you don’t bet on you?”

Looking forward, Briss says he’s taking things day by day, but always keeping his fans in mind. One grounded objective that Briss continuously works toward is pushing the culture forward. He believes music centered on real-life struggles like those he’s lived through always outway the tunes about popping pills.

“The percs is gone get be popped, the blunts will be rolled,” he said. “But the stories you got that’s unique to you will not be told unless you tell it.”