For years, longtime friends Erika Ponzo and Jessica Sarwine bonded over their mutual obsession: cheese. Over shared platters and charcuterie boards, the pair would often talk about opening a space of their own together, but the timing never seemed quite right. That is, until this year.

Though just a month into opening their new cheese shop, Oh La Vache—it’s a French phrase akin to  “Holy Cow”—Ponzo and Sarwine talk big plans for their space on Retro Row.

Currently the shop carries about 40 different cheeses: a variety of soft, medium soft, firm and hard cheeses of all the animal varieties. Cow, sheep, and goat (“the holy trinity” as they call it) and even a few combinations. But come the end of the year, they plan on upping their treasure trove to 100 different cheeses.

“We like to say [we’ll carry] all the cheeses—from Europe, New York, Vermont, Wisconsin,” Ponzo said. “And if we don’t have it, we’ll try and get it.”

An assortment of cheeses is placed on the counter as Jessica Sarwine, left, and Erika Ponzo, co-owners, at their new cheese shop Oh La Vache in Long Beach Thursday, Feb. 18, 2021. Photo by Thomas R. Cordova.

Ponzo’s promise is as much directed toward customer service as it is the excitement of discovering new cheeses, though, the likelihood of that happening is slim. In her 16 years developing her palate it’s safe to say she knows her way around a cheese wheel.

Ponzo said her own personal fascination and education in all things cheese started in high school, through a French exchange student she had befriended, but refined her education while working seven years at the aptly named The Cheese Store of Silverlake in Los Angeles. Ponzo had just moved to LA when she spotted the shop while driving one day.

“I just walked in there was like, please, hire me,” she recalled. “I just loved it so much, it was such a pleasure to work there 50, 60 hours a week. I never got tired of it,” she said.

The owner of the shop, Chris Pollan, taught Ponzo everything he knew, including the concept of the “holy trinity,” which the pair now use in their own shop as a way to help customers refine their own palates, or find the perfect tasting trio for whatever their pairing needs.

Say, for instance, the evening’s libation is a red wine. The pair would select a soft, medium and a firm  cheese from one of each animal variety. Ponzo said she might suggest a cow’s milk double cream brie, perhaps a Spanish goat cheese second, and a sheep’s milk Gouda. Of course, it’s all up for experimentation—it’s part of the fun.

Shortly before the Silverlake shop closed in 2018, Ponzo opened up a gourmet sandwich shop in Highland Park—Monte 52—that earned a near stellar 5-star rating on YELP. Part of the shop’s charm was its selection of imported and domestic cheeses, hand-picked by Ponzo.

But by summer 2020, Ponzo was feeling the wear of her commute to northeast LA from Long Beach. Her daughter, Eleanor, was nearly 1-year-old and with the added pressures of owning a business during the coronavirus pandemic, Ponzo approached Sarwine about starting a new venture closer to home. For Sarwine, the prospect of using her business know-how and marketing skills—honed over years as the marketing director at Beachwood BBQ and Brewery—in cheese retail was an enticing new challenge. 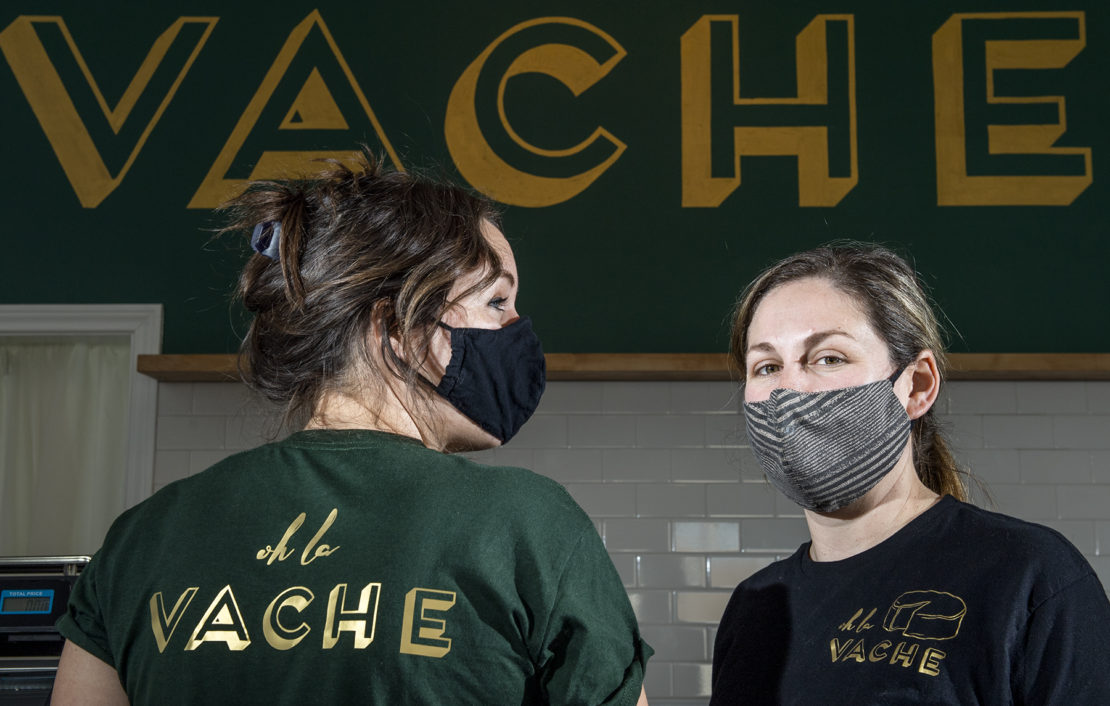 “My expertise balances her expertise,” Sarwine said of the partnership, though, the local businesswoman is no stranger to the cheese counter. “I would always go to the local cheese shops—even Ralphs or Trader Joe’s—and I would get anything that was new or that I hadn’t had. I really like cheese.”

And while Sarwine admitted opening up Oh La Vache during the pandemic came with its own intrinsic fears about the stability of the economy, they had noticed that cheese was trending, which gave them some confidence.

“I think we both felt pretty good about it in the sense that we’re a pretty small shop, but it seems like with people being home [because of the pandemic] they are seeking out this type of product more than they had previously,” Sarwine said.

They’re not wrong. According to data analysis by Mintel, a London-based market research firm, U.S. sales in cheese sectors increased 15% between 2019 and 2020, largely due to more snacking and cooking at home during the pandemic the report said. Drinking habits also spiked last year, which bodes well for the ol’ cheese and wine combination.

Though Oh La Vache does not sell wine, or any alcoholic beverage for that matter, the two cheesemongers have designed their space to be a one-stop shop for build-your-own charcuterie boards.

Encased behind glass on the right side of the register sits a plethora of cured meats—slabs of spec, calabrese, bresaola, and prosciutto. There’s dried fruits and pickled snacks such as olives, cucumbers and radish. For crunch: petits toasts and sea salt and rosemary French crackers. Fresh baguettes are delivered by local bakery, Hey Brother Baker.

The final stage Ponzo and Sarwine are gearing up for is to make Oh La Vache a sort of neighborhood market, with high-quality pantry, cooking staples, and seasonal produce. Dried pastas, beans, polenta, Italian cooking oils and vinegars currently line the white shelves bordering the interior of the shop. Once they’ve hit their stride, Sarwine said, they’ll start working with local farmers markets for produce.

The pair say they’re in no rush, though, and are focusing on building their clientele base and fine-tuning business operations. For now, the shop is only accepting digital orders from 11 a.m. to 5 p.m. Wednesday through Sunday with pick-up and delivery service available only at Oh La Vache’s pop-up at Beachwood Brewery’s tasting room, Beachwood Blendery, in Downtown (247 Long Beach Blvd.). In lieu of samples, Oh La Vache has a take-home sampler plate which costs about $25 for eight or so 1-ounce samples of cheeses.

Sarwine said their flagship store should be open for walk-ins by next weekend.

You can keep up with Oh La Vache best through Instagram, click here. Oh La Vache is located at 2112 E. Fourth St.