'Pay It Forward' at Everytable and you can help feed a person in need in Long Beach • the Hi-lo
- ADVERTISEMENT -
BEST FEST 2022® Live and in person — June 16. RSVP NOW

Beginning Monday, Jan. 31 until Feb. 4 locals who patronize the new Everytable restaurant in Downtown will also have the option of buying a meal for a person in need.

Whether you plan to dine or not, patrons can visit the store to purchase a meal (or more) that will be donated directly to people experiencing food insecurity in Long Beach.

The five-day promotion, dubbed “Pay It Forward,” is a collaboration between Everytable, which sells healthy and affordable grab-and-go meals, and local non-profit, Local Hearts Foundation. The promotion coincides with Everytable’s grand opening on Jan. 31, marking the food business’ second storefront in Long Beach.

“It was a no-brainer for us to collaborate,” Local Hearts co-founder HJ Chong said. “Number one, it’s a healthy meal going to the community….people that shop there will know that their money is well spent because they’re feeding another family.”

“I feel within the next couple of days we will be able to come up with a solution,” Chong said. “Our biggest concern at the moment is to bring as much foot traffic to the store [as possible].”

Among their many forms of outreach, Local Hearts Foundation has been helping feed Long Beach’s low-income areas for the last decade. From large-scale food distributions, such as their annual Thanksgiving turkey giveaway, to impromptu donations of groceries and other pantry staples at local businesses.

Everytable shares a similar goal. Since launching the company in 2015, Everytable says its mission is to make healthy food cheaper and more accessible to underserved communities.

Affordability is a priority; price points for their grab-and-go meals are set by the neighborhood’s income levels. So, a turkey taco bowl at the Downtown Long Beach location, for example, costs $7.35 while the same meal at the Compton store costs $5.70.

Chong and fellow Local Hearts co-founder Tito Rodriguez—affectionately known in the community as “Hood Santa”—said they appreciate that through the “Pay It Forward” campaign they can now offer the community healthier options in their efforts to feed. 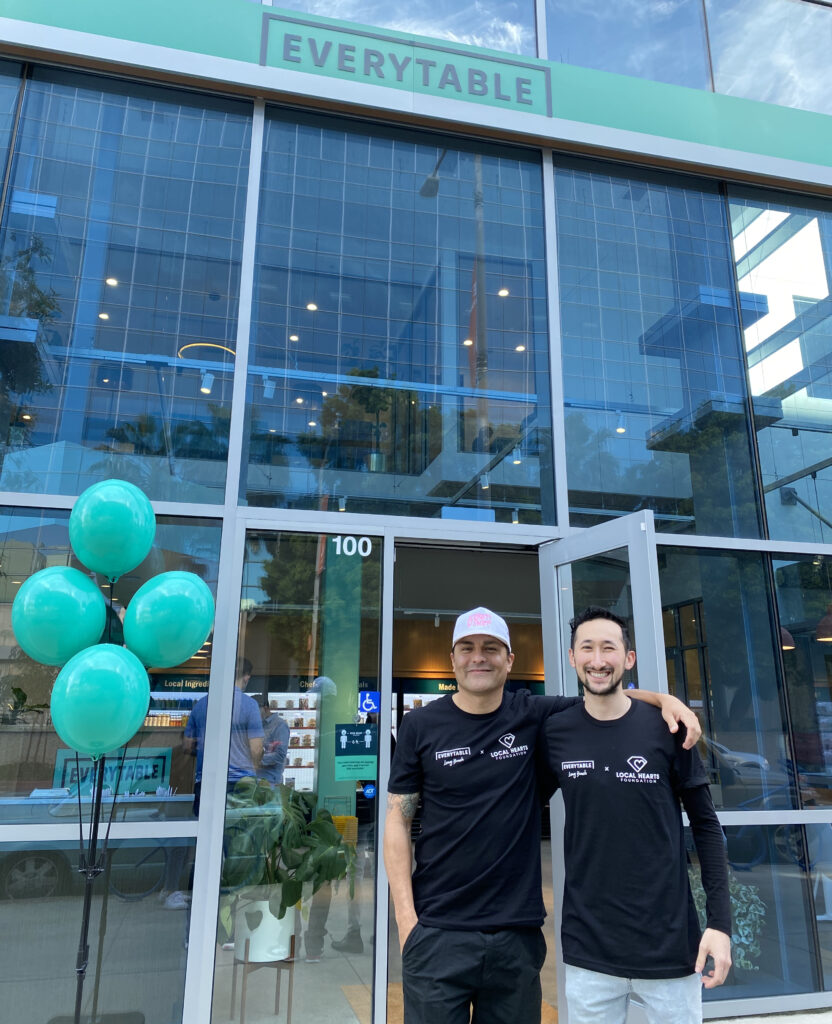 “We know that in under-resourced areas, it’s not that they don’t want to eat healthy, but a lot of those options aren’t affordable. So for us to have an option like that is incredible,” Rodriguez said. “We’re gonna be able to get these kids that are eating Top Ramen, something healthy using Everytable. That’s huge.”

In Long Beach’s ever-expanding business landscape, Rodriguez said it’s refreshing to make connections with a corporate company that seems genuinely interested in supporting its community. When that happens, he said, both parties reap the rewards.

“When you come in, and you show the community that you got their back, and you’re not just there to take, take, take and you’re actually willing to give back and help them right with things, the community sticks together and they come to support,” he said.

Everytable has its sights set on a third Long Beach location, this time in the 6th District, where Rodriguez grew up, on Pacific Coast Highway and Martin Luther King Jr. Avenue. Price points are expected to be cheaper since the area is a low-income neighborhood.

“They’re going to adapt to it. And to me, that’s amazing,” Rodriguez said. “A company that’s willing to do that, to feed the community, cut back on profit for the betterment of the people there is rad. They’re coming in not just to conquer but they’re coming in to help and that’s why we need to back those kinds of companies that want to make those things happen with us.”

The third Everytable in Long Beach is expected to open in the next few months, according to the company.

Everytable in Downtown is at 421 W. Broadway. Hours are Monday-Friday 11 a.m. to 6 p.m. The restaurant is closed on the weekends.