Sydney McKeever, 17, had always enjoyed cooking for herself and her family, but last year spending time in the kitchen became her tether to normalcy.

In March 2021, just before her 16th birthday, McKeever was exercising at her family home in Belmont Heights when she suddenly became very sick with excruciating headaches and relentless vomiting.

“It was really scary because we didn’t know what was going on for a really long time,” McKeever recalled. “I thought I had food poisoning at first.”

After days of intense symptoms and repeated visits to the emergency room, doctors discovered that McKeever had suffered a brain hemorrhage. Recovery kept her in the hospital for two weeks and bedridden for a month.

The Poly High School student’s once bustling schedule, crammed with AP classes, Girl Scouts meetings, volleyball and shopping with her friends, came to a screeching halt.

“The only thing I could really do was walk around my house and that’s when I really started cooking again,” she said.

To pass the time, McKeever would cook some of her parent’s favorite meals. And as she chopped garlic, diced vegetables and experimented with herbs, she leaned into the exercise was a way to keep her mind off difficult choices she faced.

McKeever had survived the hemorrhage with minimal damage to the “eloquent” region of her brain—the part responsible for learning, working memory and speech—that with work, could be mitigated over time.

“I know I’m extremely lucky,” she said. “A lot of people lose the ability to speak for a while. They lose motor functions.”

But McKeever’s luck was short-lived. She was diagnosed with an AVM, or arteriovenous malformation, a rare and often life-threatening condition that occurs when a group of blood vessels in the brain form incorrectly. As if often the case with AVMs, McKeever had developed the condition during infancy and had gone undiagnosed until the hemorrhage.

This condition meant McKeever was very likely to have another brain hemorrhage. And a second time, doctors believed she wouldn’t be so lucky.

“Her AVM was placed in her left hemisphere, but it was next on the edge of a structure called the hippocampus, which is the learning center of your brain, the ability to learn new information,” McKeever’s mom, Xantha, said. “So, it was in a really critical spot.”

McKeever’s options were few, and each presented serious risks. Brain surgery, which was one of the options, could potentially cause new harm to her speech and memory, even her vision.

“She wouldn’t be able to drive, play sports, do her life’s dream which, ironically, had for a couple years been to be a doctor or some kind of medical professional,” Xantha explained.

Radiosurgery, though, would leave her vulnerable for a yearlong period to a bleed again in the spot she had already hemorrhaged, potentially killing her.

They opted for brain surgery. But just before the procedure, doctors discovered the AVM had disappeared, something that can happen in rare cases, Xantha explained. Months later, though, doctors found that the AVM had returned. This time the family went for radiosurgery.

“I think that was the best option and the doctors were such a comfort to me,” McKeever said.

Through months of deliberation, treatments and after the surgery, McKeever kept cooking, culminating in what would become her cookbook, “The Vegetarian Cookbook for People Who Don’t Like Vegetables,” that she self-published in April.

The cookbook features over 20 vegetarian and vegan-friendly recipes, the meals originally inspired by her dad’s switch to veganism years ago. The recipes are simple and easy to follow and include health facts about a single ingredient in each recipe.

“It gets me every time because it’s so warm and comforting,” she said. 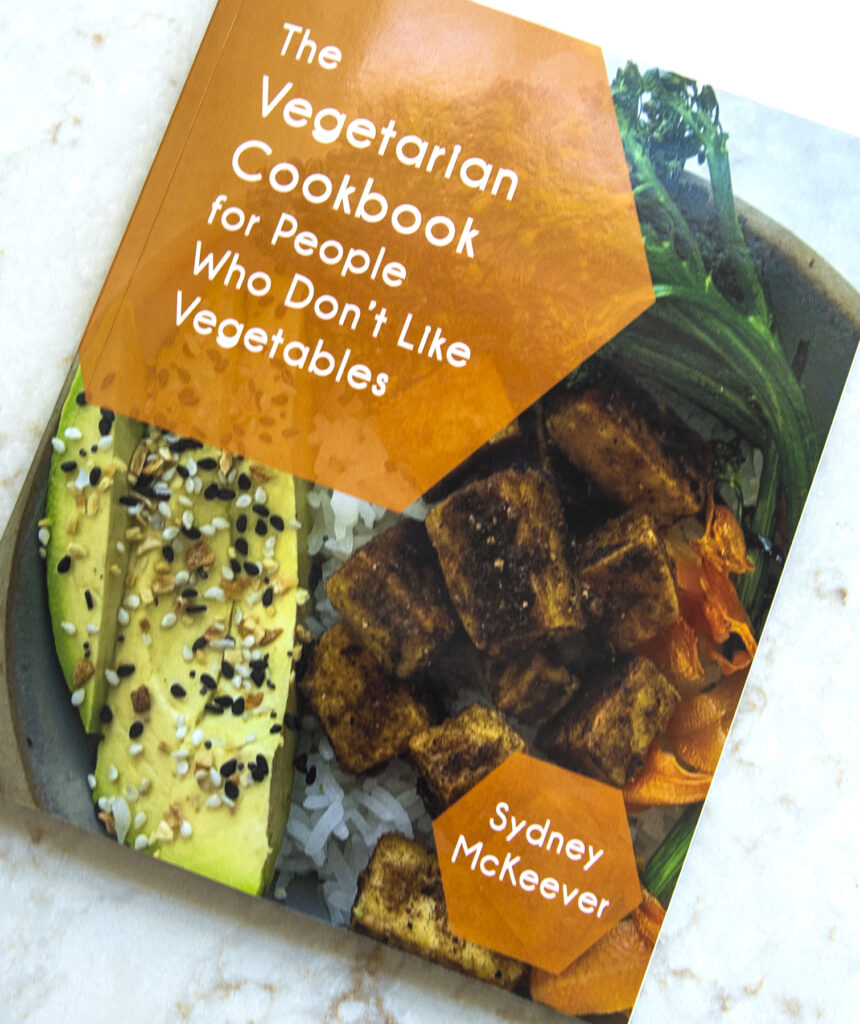 Sydney McKeever cookbook with her recipes and photos that she published in Long Beach Tuesday, Aug. 9, 2022. Photo by Thomas R. Cordova.

Putting the book together was a pet project at first, but McKeever saw potential to do more. McKeever will be donating 100% of the sales to the Joe Niekro Foundation, a nonprofit organization that is dedicated to supporting AVM patients and their families. The foundation, she explained, was an invaluable resource for her family as they navigated her treatment.

McKeever is also working on a website, as part of her Gold Award challenge with the Girl Scouts, that will include a wealth of information about AVM’s and treatment resources that she and her mother had compiled over the last year.

McKeever is now in the home stretch of her journey and treatment from radiosurgery. Come December, McKeever will know for sure if she’s fully healed from her AVM. Though the experience was at times harrowing, McKeever said what she’s learned through it was only positive.

“As cheesy as it sounds, I got to focus on what really matters in my life. I’m someone who is very intense about schoolwork and trying to achieve results,” she said. “Having the brain hemorrhage and having all my family and friends be amazing just showed me how much the connections I’ve made with people meant to me.”

Of course, the Poly High PACE student still has big plans. McKeever said she intends to study neuroscience, in hopes that she can help other people who may go through her experience someday.

And as for her big December date? She’s keeping it simple.

“I think we might go out to dinner or at least have ice cream or something kind of special,” she said.

McKeever’s book, “The Vegetarian Cookbook For Those Who Don’t Like Vegetables,” costs $16 and is available for purchase on Amazon, click here.