Three months ago, Jake Allanach realized his dream of opening up his own coffee shop. But for the first-time business owner and proprietor of Pop’s Java in Downtown, his new shop is more than just coffee, it’s a symbol of his love and admiration for his father.

“My dad passed away 10 years ago of prostate cancer and my dream for the past seven years was to open a coffee shop in memory of him,” the 39-year-old explained.

Allanach comes from a family of commercial fishermen, both his grandfather and father were swordfish anglers who charted a boat out of Newport Harbor. As such, it seemed natural to give his shop a nautical theme. From the blue-and-gray color scheme, to the overhead lamps wrapped in fishing net, to the corrugated metal lining the exterior of counter, the entire space is a tribute to seaworthy craft.

Though, perhaps the most creative testament lies within the shop’s original recipes.

“I wanted to come up with names that were associated with commercial swordfishing or fishing in general,” Allanach said.

The Purple Fever latte, which is lavender flavored, sweetened with agave and frothed with oat milk, is a callback to a common swordfish-related term. The flank of the massive fish, Allanach said, glistens purple in the sunlight.

“When you hear ‘purple fever’ within the fishing community, everybody knows what you’re talking about. It’s the ultimate game,” he said.

The latte Elvis Is in the Building comes from a popular phrase fisherman would say over the radio when they spotted a swordfish on the water, Allanach said. The drink is made from a non-alcoholic rum infused with simple syrup, sweetened with agave and steamed with whole milk.

Why rum? It was a favorite liquor of Elvis Presley, Allanach said.

The Opah latte—flavored with his mother’s pistachio and spiced pecan syrups and steamed with whole milk—is named after the fish Allanach said he’s fond of catching, Opah, also known as moonfish.

All of Pop’s Javas’ coffee and espresso are sourced locally from Black Ring Coffee Roasters in North Long Beach, where Allanach said he “fell in love” with their rich yet smooth roasts. Most of the syrups used to flavor and sweeten are made in-house by his mother, Ann Allanach, who also works behind the counter. The pair currently live together in Downtown, not far from their shop at 449 E. Broadway.

A professed kombucha fanatic himself, Allanach’s shop is also a kombucha bar and boasts eight choices of the beverage, in addition to two nitro cold brews. The kombucha is sourced from Tap Shack out of Ocean Beach in San Diego. The couple who own the business, Allanach said, drive up once a week to drop off cases of the tart, fermented drink. 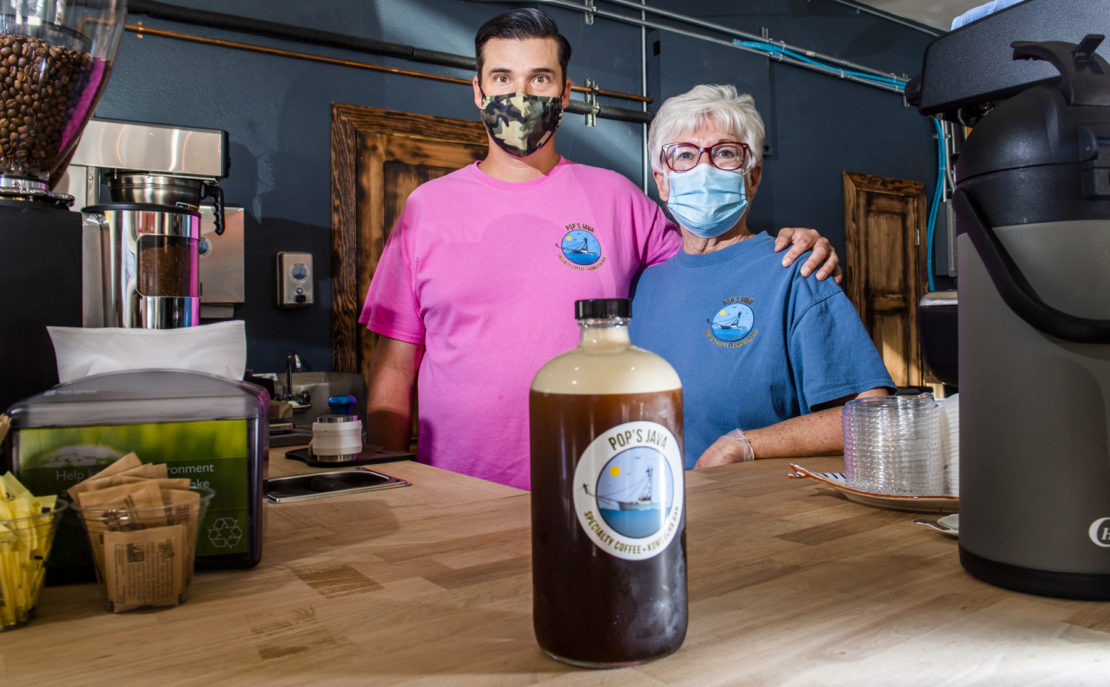 Allanach said he’s still fine-tuning what drinks to have on his menu and experiments weekly with new recipes. One that regulars have dubbed the “cinnamon roll” is made from vanilla nitro cold brew, almond milk and a cinnamon simple syrup.

“I got to find a fishy name for that,” Allanach said.

Allanach’s background in coffee started a little later than most, with the bulk of his research conducted during 2020—though he did work as a Starbucks barista for several years as a teenager.

A businessman first and foremost, Allanach left his job as executive vice president for Disruptive Drinkware, a stainless-steel bottle company, at the beginning of 2020.

Though he appreciated his tutelage under Disruptive Drinkware owner Fred Smith of the Smith’s Food and Drug grocery chain in Utah, who Allanach said taught him nearly everything he knows about business, he grew tired of the industry.

It was a slow build, Allanach described, that ultimately led him to take the plunge and open his coffee shop. In the years following his father’s death, Allanach would take his boat out to the 14-mile bank, a stretch of ocean between Dana Point and Catalina that was formerly a hot spot for commercial fisherman.

It’s also where Allanach spread his father’s ashes. Finally, one day when he was visiting his father along the southern tip of the bank, he decided he was going to sell his boat and start saving. By January 2020, he was ready.

“[I knew] it had to be in the right area, with the right story,” Allanach explained. “After my father passed, my mom showed me all these articles she had collected of my father and I said, ‘We’ve got to do it in Long Beach.’”

In July of 1937, Allanach’s father, Jack Walter Allanach was the subject of much press attention for his five-and-a-half day journey from London to New York on the Queen Mary. He was only four years old.

When Jack Walter Allanach was 2 he had been sent to live with his grandparents in London. His grandmother was a Swedish chef and his grandfather an English butler for a very wealthy Standard Oil heir. He lived contentedly there for two years before his grandparents decided to send him back to the U.S. as the Nazi presence in Europe was gaining traction.

“In 1937, that’s when Hitler started bouncing around Europe and that’s when his grandparents said, I think we need to get you back to the United States,” Allanach explained.

Press got word of Jack Allanach’s imminent journey on the historic liner and, as it’s often said of the press, they had a field day.

Encased behind glass near the entrance of Pop’s Java are a dozen worn and faded news clippings and photos of 4-year-old Jack Allanach. Headlines read: “Boy Makes 6-Day Trip From London,” “A Globe-Trotting Four-Year-Old” and “California Boy, 4, Hastens Home Alone From London.” 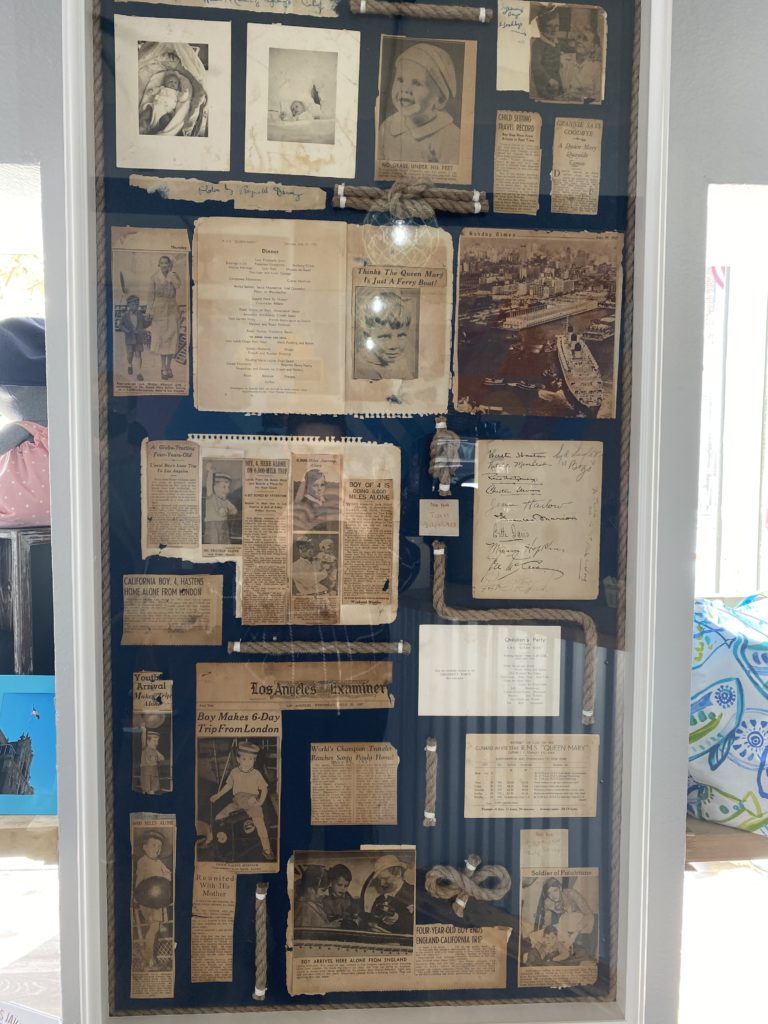 The glass display of news clippings featuring Jack Walter Allanach’s journey on the Queen Mary in 1937. Photo by Cheantay Jensen.

That last headline, Jake Allanach said, was a little misleading—his father did have a nurse traveling with him. By the end of his travel back to his father in California, which some news outlets followed, Allanach said his father was quite exhausted from the press. He didn’t understand all the fuss.

“My father had grown up on boats, since his father was a commercial fisherman, and he just thought the Queen Mary was another ferryboat,” Jake Allanach said.

The rest of Jack Walter Allanach’s life was left out of the media spotlight. For many years he worked as a commercial fisherman until the 1970s, when the market starting outsourcing fish from cheaper waters overseas, Allanach said.

“Unless you owned a cannery, there wasn’t much money in it,” he explained.

His father later started his own tax consulting business until he retired, but always made the time to go fishing with his son.

“I have a lot of traits from him, where he’s a numbers guy and he was willing to take chances in life when it came to business and things of that nature,” Allanach said. “I think he’d be very proud of what we’re doing in memory of him.”