Red Room no more: Under new owners, bar to reopen as Baby Gee this month • the Hi-lo
- ADVERTISEMENT -

For over two decades, a red, illuminated awning shone like a beacon on Fourth Street in North Alamitos Beach, guiding patrons to the Red Room. But the iconic glowing landmark is now gone, as its new owners make way for a rebranded bar.

Gianna Johns, 30, and her fiancé Daniel Flores, 42, have taken over the space and are giving it a total overhaul—inside and out—and a new moniker: Baby Gee. The couple hopes to open the new watering hole before the end of the month.

“We’re going to be serving really great cocktails,” Johns said. “But we’re also going to be a place where people can grab a shot and a beer.”

This is both Johns’ and Flores’ first time as owners, but between the two of them, they have more than four decades of service industry experience. Johns said she has held every front-of-house position at various bars and restaurants except general manager—most notably serving up drinks as head bartender at the NoMad Hotel in Los Angeles. Flores, meanwhile, has held every position except bartender.

The pair met eight years ago and were dating within little over a year, Johns recalled. Early in their relationship, Flores—who was born in Long Beach and grew up just across the Orange County border—invited Johns to his mother’s wedding in Downtown Long Beach. After the wedding, the couple hit the town.

“It’s funny, Red Room was actually the first bar I ever went to in Long Beach,” Johns said. “And I loved it back then.” 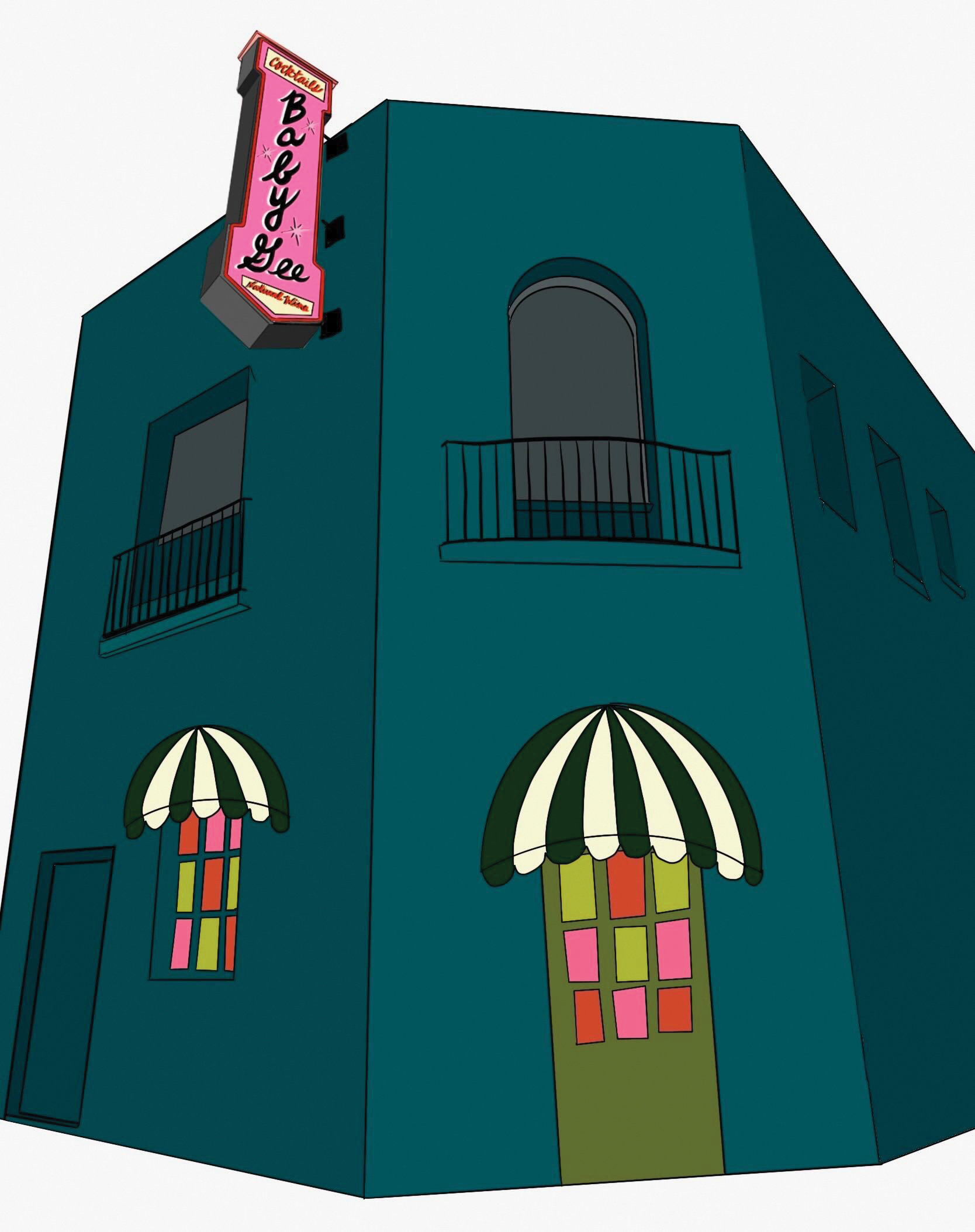 A rendering by Gianna Johns of the exterior of Baby Gee, which is replacing Red Room on Fourth Street.

During the pandemic, Johns said they spent a lot of time at Flores’ mother’s house in Long Beach. Over the last three years, Johns said she fell even more in love with the city as a whole, especially the art, music and vintage scene on Retro Row.

The couple lives near Dodger Stadium now but plan to move to Long Beach once they save up to buy a house.

When they decided to open up their own bar and heard Red Room was up for grabs, they jumped at the opportunity, Johns said, adding that their fond memories and the bar’s smaller footprint made it the perfect location for them.

On a tight budget, Johns said they are renovating the space themselves with the help of a few friends. The skateboard decks that once adorned the walls are long gone, as is the slew of TVs that had replaced them. The bar has been refurbished, and the space has received a fresh coat of paint and new flooring.

The standing tables on the left side of the space have been removed to make way for a custom banquette. A large booth also will be installed, Johns said.

The decor will be eclectic, according to Johns, consisting largely of antique lamps and “funky” paintings and portraits.

“We like to think of it as an extension of our home, like our living room where we entertain,” Johns said. “It should feel like a neighborhood bar.” 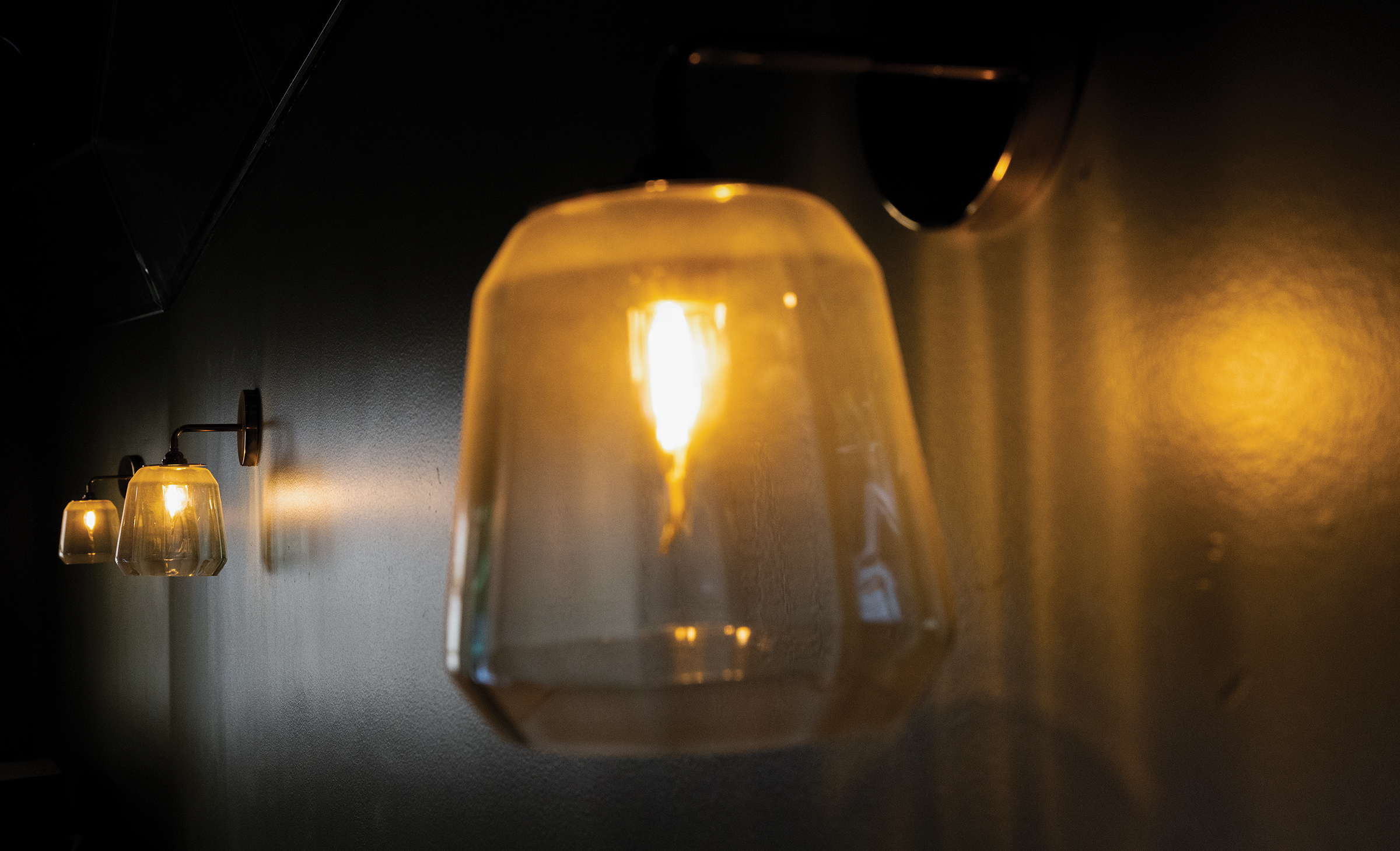 Vintage lighting will be a key design element inside Baby Gee, which is replacing the old Red Room bar on Fourth Street. Thursday, Nov. 17, 2022. Photo by Brandon Richardson.

The bar will no longer have a pool table, Johns said, but there will regularly be a DJ spinning vinyl records—mostly older material from the 1960s and ’70s.

On the exterior of the bar, in addition to the removal of the red awning, the building also has been painted. New awnings will be installed and the windows will be faux stained glass.

The bar has around 20 taps, and about half of them will be dedicated to craft beers, Johns said. But the bar also will have cocktails, kombucha, fermented ginger beer and other specialty items on tap, she added.

The forefront of the business model, however, is going to be the bar’s expansive cocktail menu, Johns said.

“We like to use really unique and special ingredients, and culinary techniques,” she said, noting that the menu will still be approachable and fun for everyone. “They’re definitely going to be really cool and elevated.”

The dive formerly known as Red Room has been a bar since at least the 1950s under a series of different names and owners, according to Blake Whytock, owner of the Good Bar on Seventh Street and former manager of the Red Room.

In 1999, it was transformed into the Red Room. Two years later, Whytock was drinking at the bar in his restaurant uniform, when the barback did not show up. The manager asked him if he wanted to help with some dishes, he said “yes,” and he ended up working at the bar for 14 years, including introducing the street’s first $1 beer night, which would later be co-opted by Fern’s (now Bird Bar) a block away.

“Red Room was huge for all of us,” Whytock said, adding that he will miss the space he helped create. He acknowledged, though, that it was a smart move to take down the awning, which will allow the new owners to shed the past and fully make the space their own.

“Everything changes,” he said. “I’m just glad it’s still gonna be a bar. I hope they succeed.”

Now that it is their turn to rebrand the bar, Flores suggested naming it after Johns—since she was a baby, her nickname had been Baby G. Johns said she was a little shy about the idea, so they compromised by adding two Es.

“It’s kind of a retro feel, like gee-whiz—that’s the vibe,” Johns said. “We love that we landed on Fourth Street with Retro Row right there. It’s my favorite street in the city.” 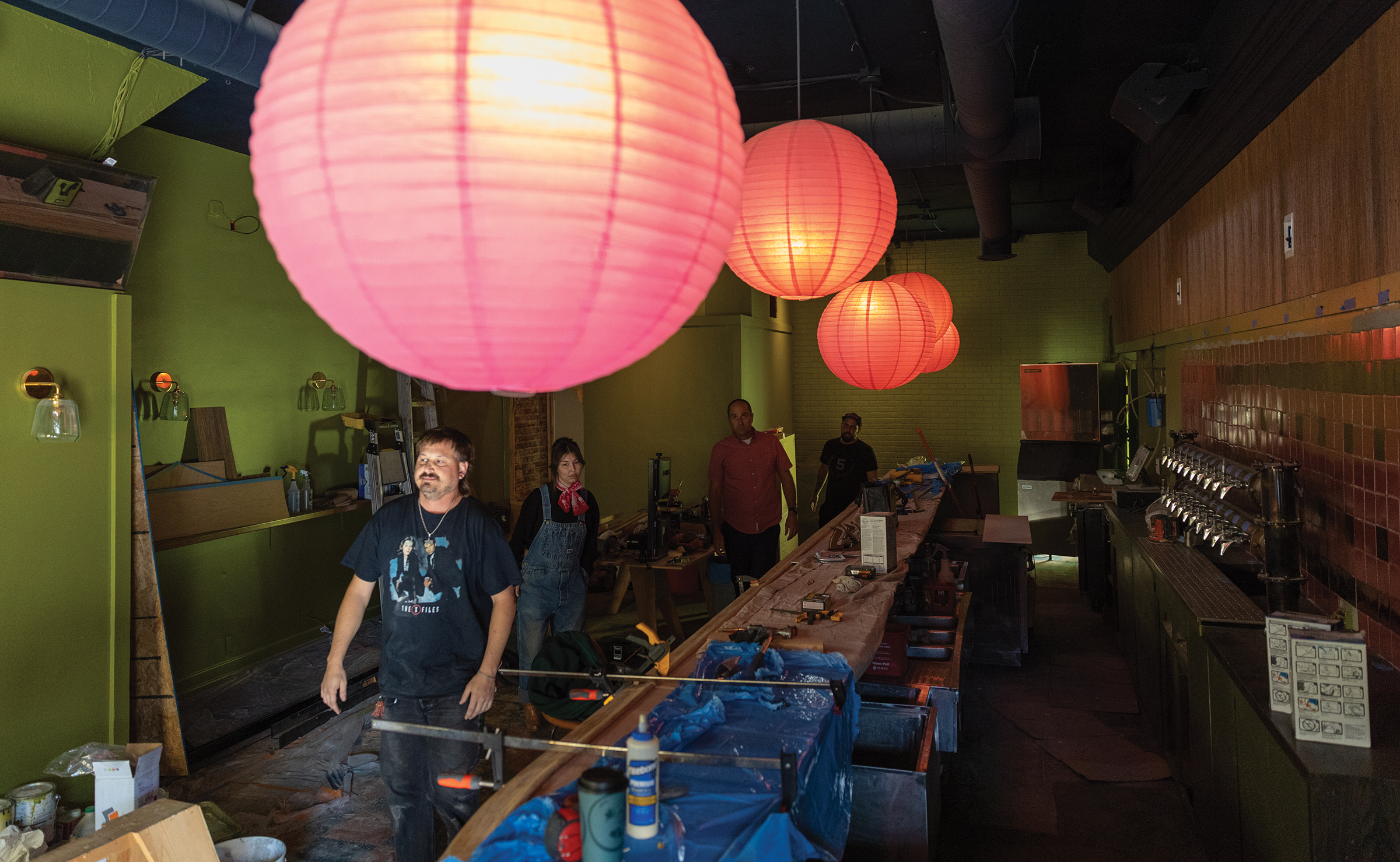 Work continues on the former Red Room bar space on Fourth Street, which is expected to reopen as Baby Gee by the end of the month. Thursday, Nov. 17, 2022. Photo by Brandon Richardson.

Editor’s note: This story has been updated to correct Daniel Flores’ age and when the couple met.