Remember outside? That's a thing again, maybe try doing these, if you want • the Hi-lo
- ADVERTISEMENT - 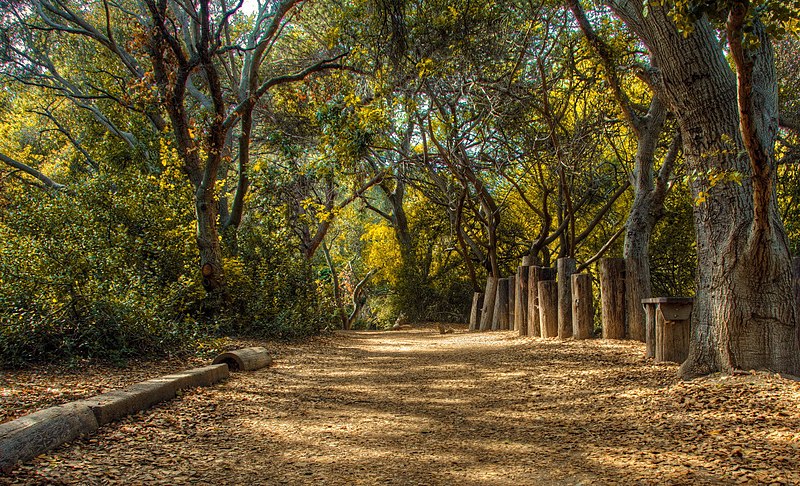 While walking through El Dorado Nature Center, you may notice a crunching sound underneath your shoes. Yeah, that’s dirt, which Long Beachers might like to know is a little different from sand. One geologist compared the mixed substance to spaghetti sauce with its many ingredients, which include soil, dust, leaves and rocks of all sizes. However, with all the microplastics and trash that end up on our beaches, maybe the sand on our shores could be considered a pasta dish of its own, Port City Risotto?

And you shouldn’t be alarmed when—and this will be one of the first things you witness—you see multiple large, brownish columns erupting out of the ground, their coverings somewhat flaky and textured. Worse than an inconsiderate pedestrian taking up most of the sidewalk, these stubborn fixtures of the Nature Center will not budge. They are quite nice, however, if you’ve forgotten to put on sunscreen before your excursion into the outdoors as they do provide some shade.

What else can you expect? Lots of feathered, spherically shaped, noisemakers floating, flapping and flying around. Some of these curious creatures sit in trees, communicating with each other to the delight of people walking on the dirt below, others float in the center’s pond, snatching up snacks with their combed bills. If you ask a guide at the center what exactly you’re hearing or seeing, they may say the word “bird” or “duck” or “heron.”

This place is like its own little world. Enjoy it. 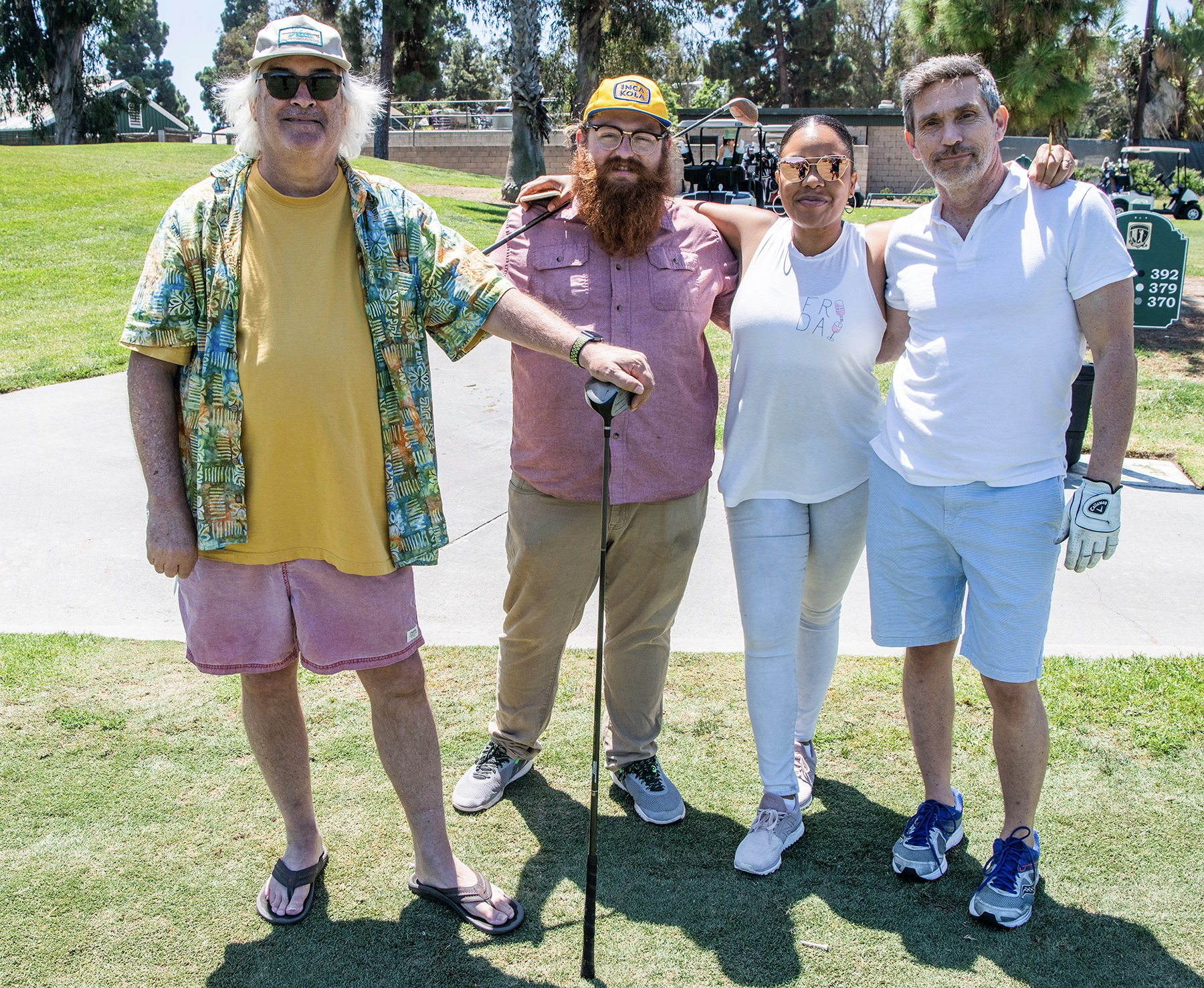 Golf is a miserable game, ask anyone who plays it. Mark Twain called it, “A good walk spoiled.” He was being kind.

Golf is frustrating and vexing and ridiculous and soul-crushing and, one time each round, it works out for just one stroke, everything coming together just as it should and you are filled with happiness and satisfaction and that is when golf is at its worst because that one shot will convince you to come back again and play this miserable, miserable game.

Oh, by the way, the golf courses are open!

Yep, Recreation Park—both Big and Little—El Dorado Park and so many other local and kind of local courses on which we have been miserable (photo above) are open and just waiting for your patronage and tears, this weekend.

Our good friend JJ Fiddler of the562.org told us he played a round of golf this week and he had no idea how much he missed the thing. Being outside in the sun, having in-person, though properly distanced conversations with fellow golfers; the competition, the challenge, he absolutely lit up when he spoke of it. So, who knows, maybe you’ll actually have a good time out there?

JJ did tell us to warn you that they have screwed in the flagpoles to the holes. Makes sense. This way people will not be grabbing the flag and potentially spreading germs and whatnot. Of course, it also means that when you inevitably hit that perfect tee shot, or two, and the ball rolls toward the hole for the inevitable hole-in-one, it will instead bounce off the flag, robbing you of your much-deserved glory. 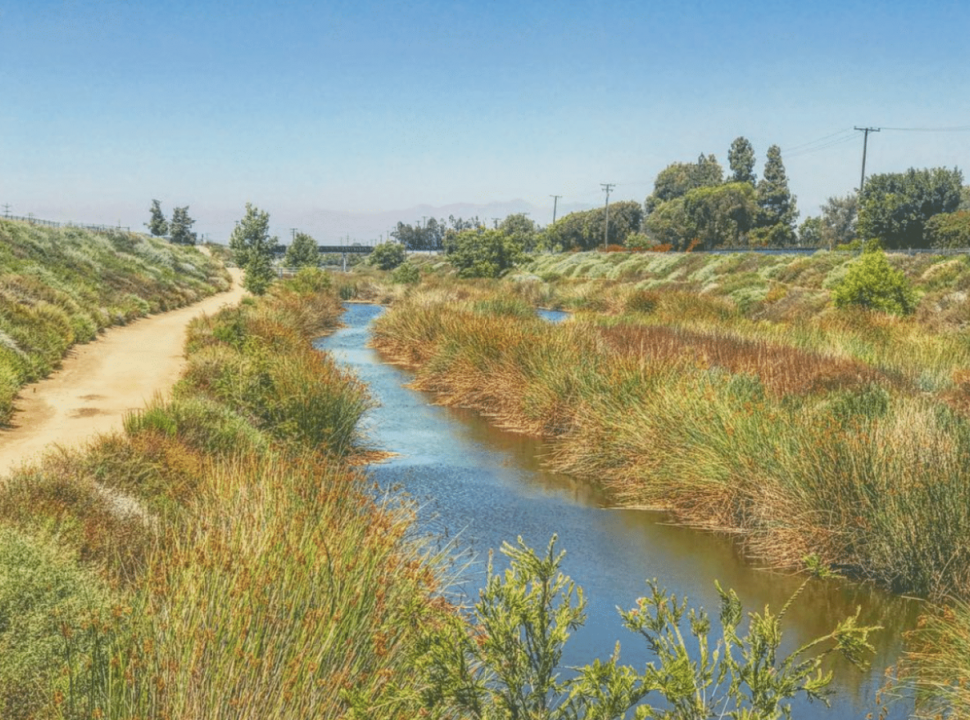 The Dominguez Gap Wetlands, hidden on the eastern edge of the LA River Bike Path, shoved between Wardlow on the south and Del Amo at the north. Photo by Brian Addison.

Hidden on the eastern edge of the Los Angeles River Bike Path, shoved between Wardlow Avenue on the south and Del Amo Street at the north, sits one of Long Beach’s most underrated natural wonders: The Dominguez Gap Wetlands; 30 acres of nature at its best, complete with common sightings of birds, a gorgeous assortment of native plants and flowers, and probably a wetlands vibe that it has never achieved before given its lack of human intervention over the past two months.

Since it opened in 2008, creatures have come in droves to make the wetlands their home—not just ducks, blackbirds, hawks and cormorants, but butterflies, rabbits and other wildlife.

Fun fact: This man-made wetlands has an entirely unseen quality. A full-on water-cleansing system that uses the wetlands plants to clean the water before pumping it back into the ground. 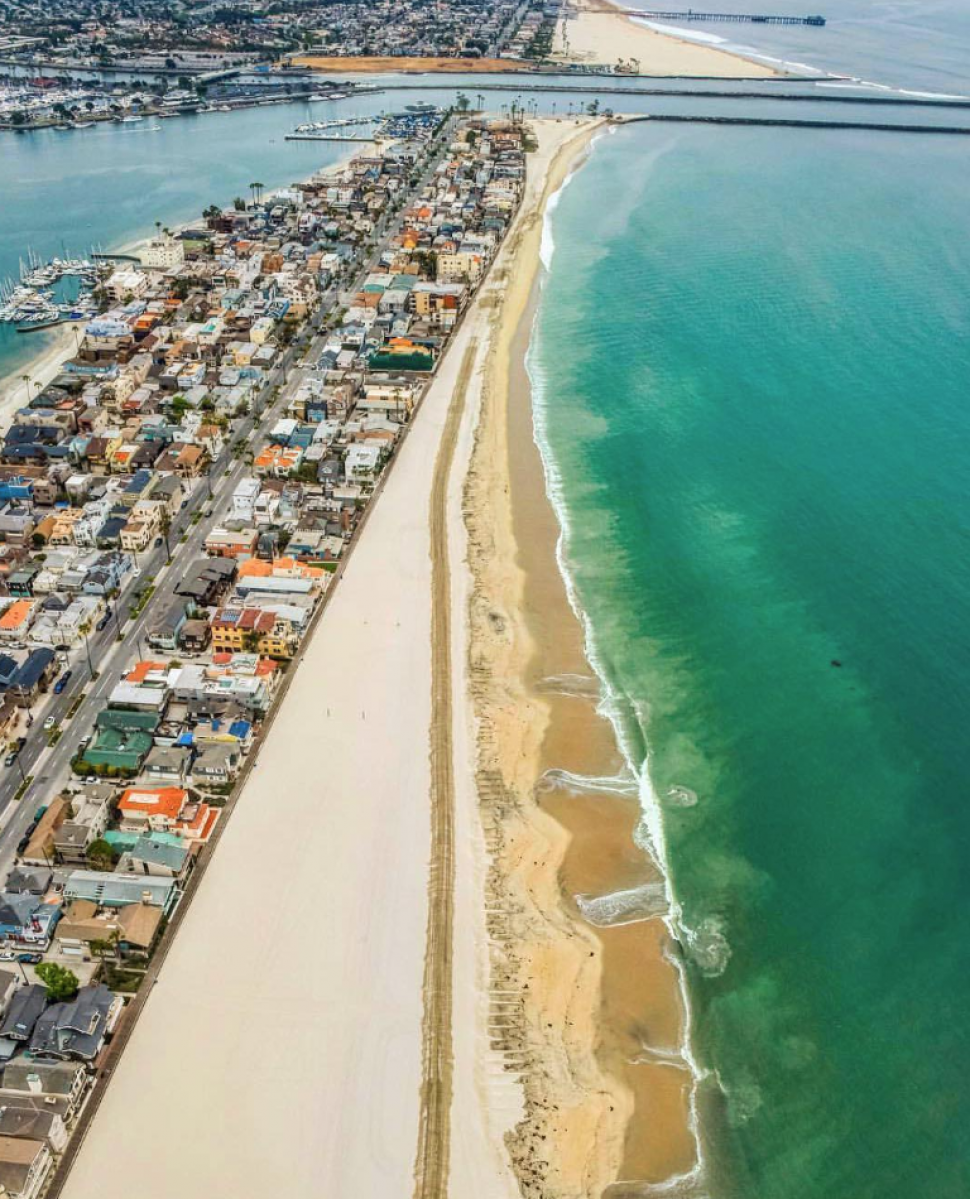 The Long Beach peninsula, which stretches toward the easternmost edge of the city. Courtesy of the City of Long Beach.

The Long Beach Peninsula—an often forgotten part of town because of its more popular neighboring Belmont Shore and Naples—is a quiet gem. And by quiet, we mean quiet.

Removed from the cacophony of Ocean Boulevard and Alamitos Beach, the Peninsula could be seen as ho-hum—and that’s precisely what makes it a great escape post-quarantine. Walk along the long stretches of either the Seaside Walk or the Bayshore Walk, view the facades of beachside homes while either taking in a view of the Pacific or Alamitos Bay. Upon reaching the tip of the Peninsula, hang out at Alamitos Park, say hi to the imaginary lifeguards that would typically be there in reality, and hoof back to the Shore.

Pro tip: Stop at VIBES Cafe on the northside of 62nd Place for a coffee to take on your stroll. 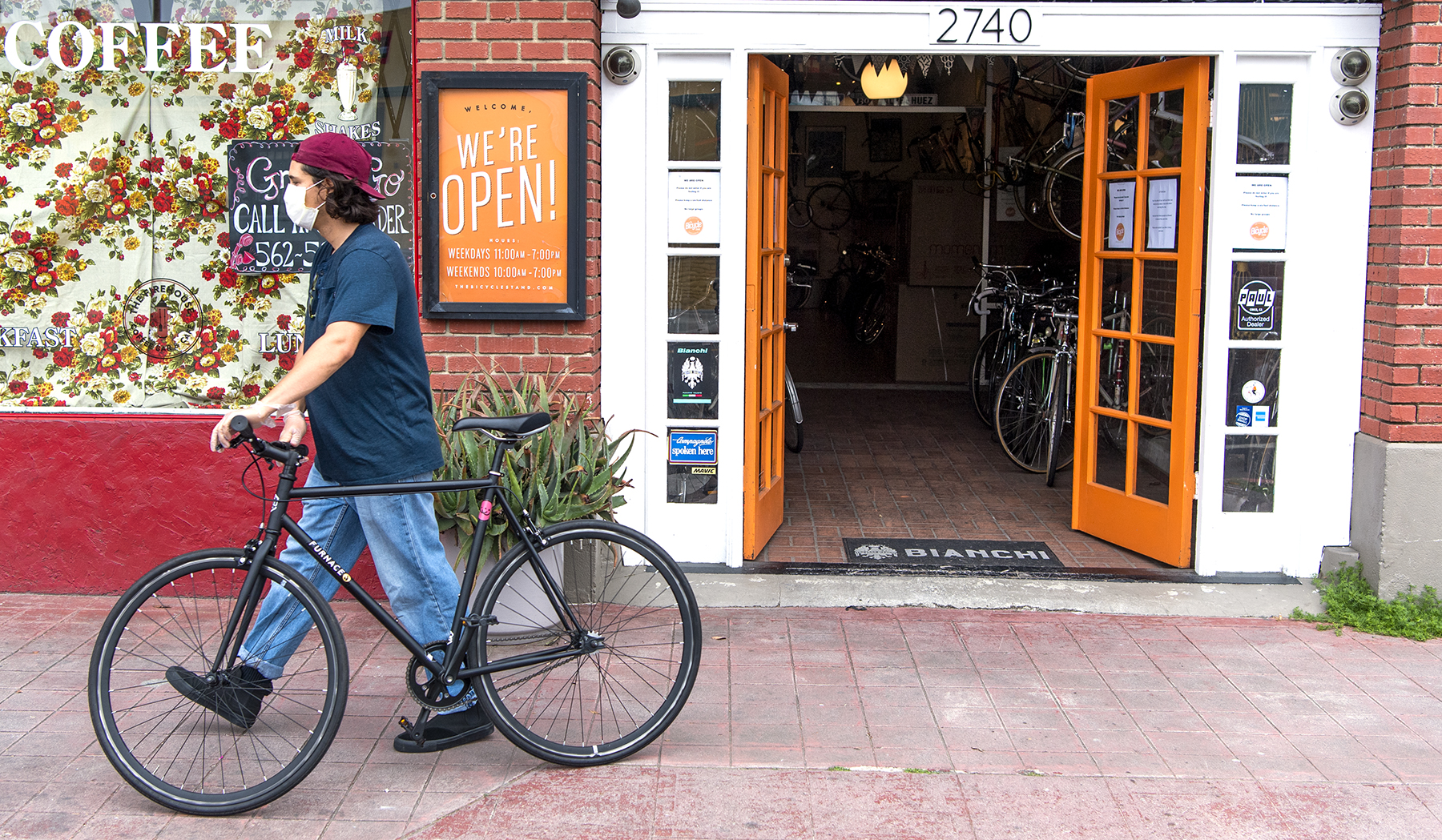 Kory Khojasteh walks out of The Bicycle Stand after getting his bike worked on in Long Beach Wednesday, April 29, 2020. Photo by Thomas R. Cordova.

This typically two-wheeled contraption has, during the pandemic, been brought up to the surface as an essential mode of transportation not only in getting some exercise but making trips to buy groceries and accomplishing other necessary errands. But, if you’re just now lugging your dust-caked steed out of its dark and damp corner of the garage, here’s what you can expect while putting what is commonly known as a “bicycle” to good use.

You must pedal continuously to move the thing, and you, the person riding the thing, forward. This isn’t one of those fuel-sucking machines where simply pressing your foot down on a small platform means you get to go wherever you want as long as you’ve got the dough and the time. Nope, this type of vehicle mimics life a little more closely, as in, the energy you put into pedaling it, equals the distance you’re able to travel. Luckily, for casual riding, it’s not too much of a sweat to ride a couple miles in your own neighborhood, which leads us to another thing you can expect…

A glorious sense of freedom and wonder.

The cool thing about not being confined to a car is the amazing amount of detail you tend to notice at a slower pace. That towering agave in the corner of your neighbor’s yard? Beautiful. The laughable shape of that cloud in the sky? Gorgeous. That pothole in the middle of the road? Watch out! There’s a reason some are called “fanatics” of the activity. You’ve been warned, never will you have felt more aware of your surroundings, or connected to your community (please wave at your fellow bicycle riders and pedestrians from a safe distance).

For more tips and tricks on how to man this people-powered machine, we recommend checking out pedalmovement.com.

Vova, did not want to give his last name, his mother, left and Suzi Gunn flies a giant octopus kite while at the beach in Long Beach Thursday, May 14, 2020. Photo by Thomas R. Cordova.

When’s the last time you flew one of those paper or cloth contraptions, anyway? Probably feels like forever, maybe never. In light of the host of new activities and places you can go to, why not celebrate by doing something you never do on a day that’s, frankly, pretty perfect for it?

And just where might you find a kite, you ask? Well, because everyone wants the bad news before the good news, no, kite stores like Up Up and Away are not open. CVS, Walgreens and Rite Aid are, thankfully; very essential, and very open. Try your luck there.

VISIT AN OLD FRIEND (THE BEACH) 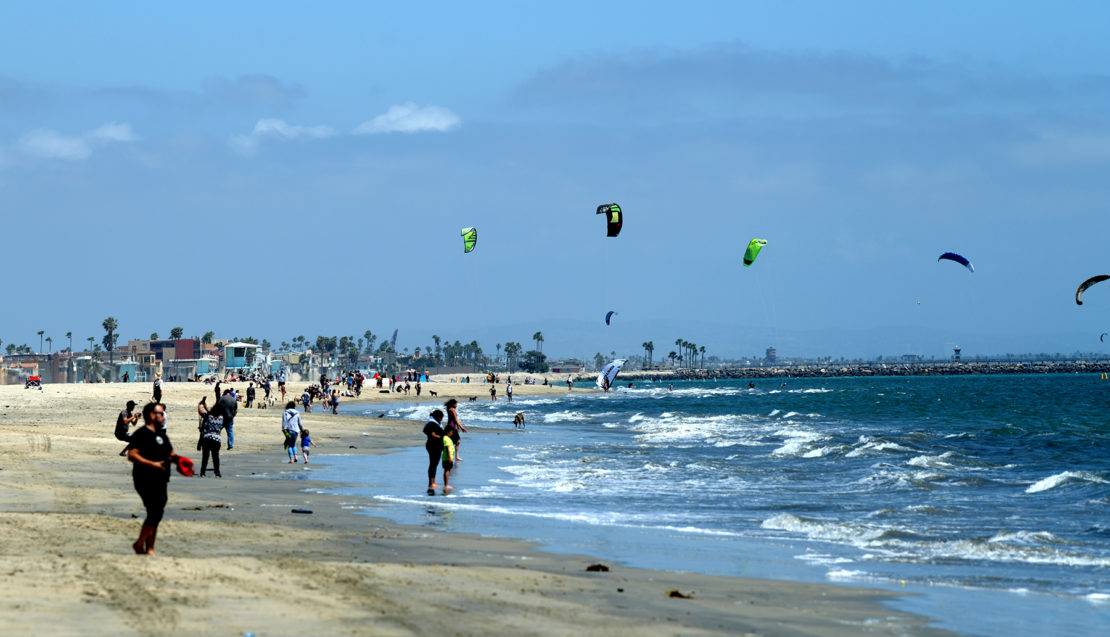 People enjoy the sand and water at the beach during a sunny windy day in Long Beach Thursday, May 14, 2020. Photo by Thomas R. Cordova.

No, you’re not misreading this. The beaches are open. Well, kind of. They’re open to you so long as you’re open to following the rules, which does not include laying a towel on the ground to work on evening out your tan.

That’s right folks, the beaches are open to you so long as you’re moving. Walk, run, skip for the joy of once again feeling the sand beneath your toes. Heck, if you’re excited enough go full throttle and plunge right into the murky water.