Peter Beck’s hands, particularly his knuckles, are covered in little scars—battle wounds from a decade of woodworking. For more than half his life, the 17-year-old has built model boats that have become increasingly intricate over the years.

The summer after first grade, Beck’s parents signed him up for a day-camp program at the Colorado Lagoon where each child was given various components and instruction on how to build a model boat.

Both of Beck’s parents were working at the time, his mom Christina as a ballet teacher.

“He hated going to the studio with me,” she said.

The lagoon was walking distance from the family’s home, Christina said, and the boat-making class was one of the few drop-in programs she could find. So she signed Peter up and began dropping him off each morning.

Peter recalled being handed a keel to file until it was rounded. Then a hull to sand and file. And so on until, ultimately, he had a water-worthy, race-able boat to compete against the other kids in the program.

“In the beginning, it was pretty tedious work. Very repetitive—sanding and filing,” Peter said. “Once I was able to start painting it and see the components come together, it got me excited.”

Having competed in dozens of races, Peter said he’s won quite a few times, but humbly added that luck of the wind was just as important as craftsmanship.

Prior to the class, the family had no ties to sailing, Christina said. But after that first summer, he was hooked. Peter attended the program from 2011 to 2017, when he became teen volunteer helping run the program and teaching kids to build the boats.

Outside of his boat building, Peter has learned to sail full-size boats. The Wilson High School junior also enjoys surfing, running and basketball.

He said he has not decided what he wants to study in college but said it would be in the realm of design, such as landscape architecture or city planning. But he said boat building is a hobby that he plans to continue indefinitely.

“I haven’t lost any interest in it so far,” he said. “I’m still having a lot of fun, so as long as that’s the case I’ll keep doing it.” 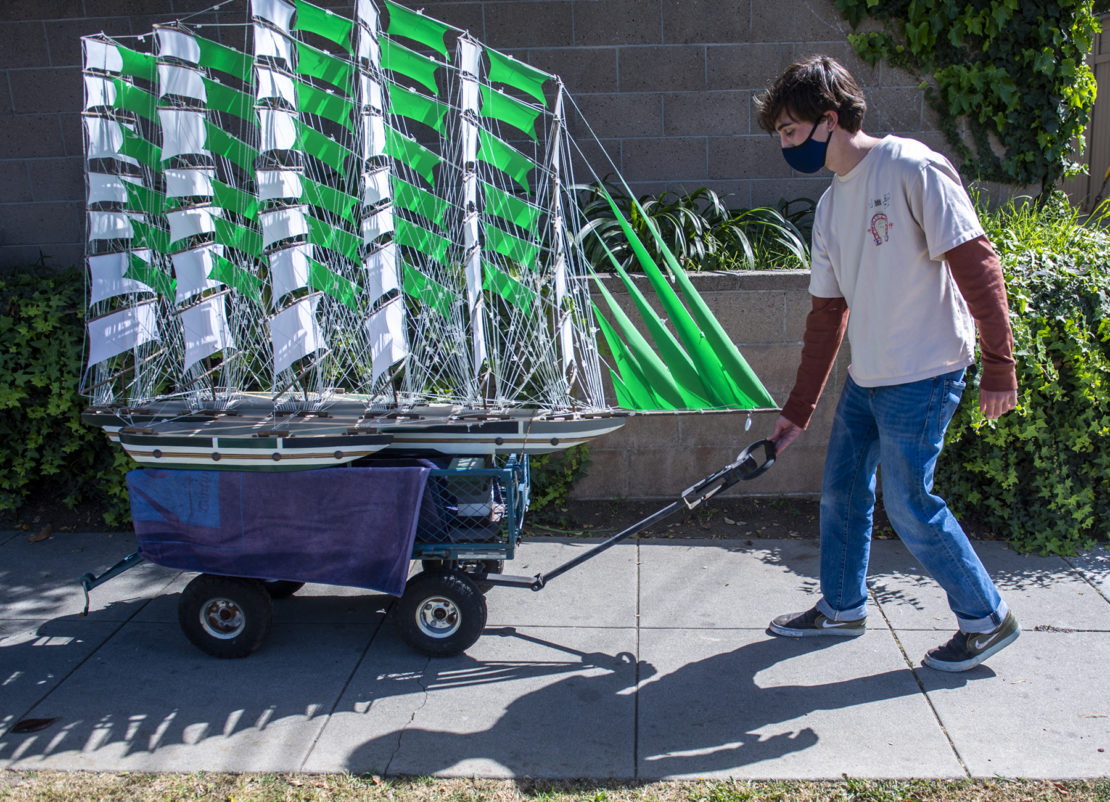 Peter Beck pulls one of his custom-built model boats to the Colorado Lagoon to sail in Long Beach Friday, April 16, 2021. Photo by Thomas R. Cordova.

Over the last 10 years, Peter has built about 60 boats, many of his own design that are far more intricate than the basic sailboats he started with. Some of the boats are sailable, while others are decorative.

Peter has researched various ships and their histories, studying different styles for inspiration. From Chinese junk ships to traditional European vessels, he has pulled inspiration from them all.

“But a lot of the designing I do is kind of just theoretical,” he said. “I make them up in my head.”

When it comes to making a seaworthy model, Peter said he often opts for a catamaran or trimaran design because stabilizing the small ships is a challenge. During the program, Peter said each boat included a custom keel weighted by lead, which kept the ships from tipping in the wind. However, outside of the program, Peter said there are sourcing issues that make it difficult for him to obtain the raw material.

Peter’s boats vary in size, with his first boats measuring 12 inches. But about four years ago, he made his largest boat to date: Over the span of four months—during which he put in 25 hours or more per week of work—Peter built a 9-foot-long, 5-foot-tall ship that featured 100 hand-sewn sails.

He has since deconstructed the boat and used the materials to make his current largest, which is 8-feet, 7-inches long with 115 sails.

Every sail on Peter’s boats, whether they are seaworthy or not, is manually retractable to preserve the designs’ authenticity. Braided fishing line is used for the ships’ lines, with the larger and more complex models requiring upward of 500 yards.

Peter taught himself to sew and to use the variety of power tools required to construct his ships, including a bandsaw, via YouTube tutorials and trial and error, he said. The garage of the Beck residence has been converted to a workshop filled with Peter’s tools and materials.

Peter Beck peers through the sails of one of his custom-built model boats in Long Beach Friday, April 16, 2021. Photo by Thomas R. Cordova.

“I can see him through the garage door when he doesn’t know I’m looking,” Christina said. “I take pleasure in watching him create. I’m proud of him.”

In March 2019, Peter began selling some of his boats, with prices ranging from $50 to $120 depending on the size and intricacy. He sold through word of mouth until February of this year when he set up a website.

To date, Peter said he has sold about 12 ships. His aunt, Anastasia Rose, is one of his best customers, having spent $225 on two boats. One of the craft—the more elaborate piece—resides in the living room of Rose’s San Diego home, which overlooks the Pacific Ocean. The other, a simpler sailboat, was a gift for her daughter.

Aside from selling his own creations, Peter takes on commissions for specific vessels from customers, he said. He is currently working on two commissions: a sabot replica and a scaled model of a 30-foot sailboat.

Many of Peter’s creations are kept in the garage but numerous pieces are scattered throughout the family’s home, Christina said.

“All throughout the hallways, in the living room, on the mantel, in the dining area,” she said. “It doesn’t bother me. I look at them all the time because I see something different—maybe the light hits them differently. They are beautiful to me. They are a part of our lives.”