The event is part of CSULB’s Latinx Heritage Month Celebration 2020, which started Sept. 15 and runs through Oct. 15. “Mujeres de Arena” is a group effort to raise awareness of the violence toward women in the border city, where, over the last three decades, hundreds of women have been murdered with many of those cases unsolved.

But how the play was brought to the Long Beach campus is the story of one student’s struggle with grief, amplified tenfold for the greater cause of raising awareness of the violence against women that happens not only in Juárez but all over the globe.

A Master of Arts in Spanish student, Mónica Herrera’s father gave her the idea to do her research project about femicide. An intellectual in his own right, she began working with him on pulling together the history of femicide in Mexico, including learning about the ongoing atrocities in Juárez, which is just a few hours away from Monterrey, where Herrera had lived for three decades.

“I lived in Monterrey, there is just one state between Juárez and Monterrey, I lived there 30 years, I went to the university, I watched the news every day, I read the newspaper every day, and I didn’t know anything about the femicide in Juárez. Why? Because everything is hidden by the government,” Herrera said.

But about two weeks into the project, her father passed away.

“I remember that when I came back from his funeral in Mexico, I saw the research paper on my desk, it was very painful to see it,” Herrera said. “I was very close to my father. He was the person who raised me, he was my best friend. When I saw that research paper, to be honest, at that time, I didn’t want to continue.”

It wasn’t until a few strenuous weeks of grieving later, that Herrera had an epiphany: she had to finish this for her father. The last time she spoke to him before his death, after all, was about the project. She told herself she would work just one hour every night to complete it but would end up on some nights up until 5 a.m., her interest in the subject reignited.

“I remember at that time, I had a lot of pain because my father died, and I remember I saw many documentaries with the mothers grieving their loss because they’d lost their daughters,” Herrera said. “I was like, ‘Oh, I’m not the only one who is suffering.’ I felt empathy for them. And I think that was the first click. I was more interested because I felt like I needed to know, who is killing these women?”

It was through this reignited passion that Herrera discovered the play “Mujeres de Arena,” written by Humberto Robles. She learned the play had been performed more than 200 times by different groups, in more than 20 different countries, so she started reaching out to different directors, ultimately sending out more than 40 emails, but to no avail. That is, until she found the email of Humberto Robles,  himself.

“He answered my email two days later, I was speechless,” Herrera said. “He told me, ‘I want to help with everything that you need.'” 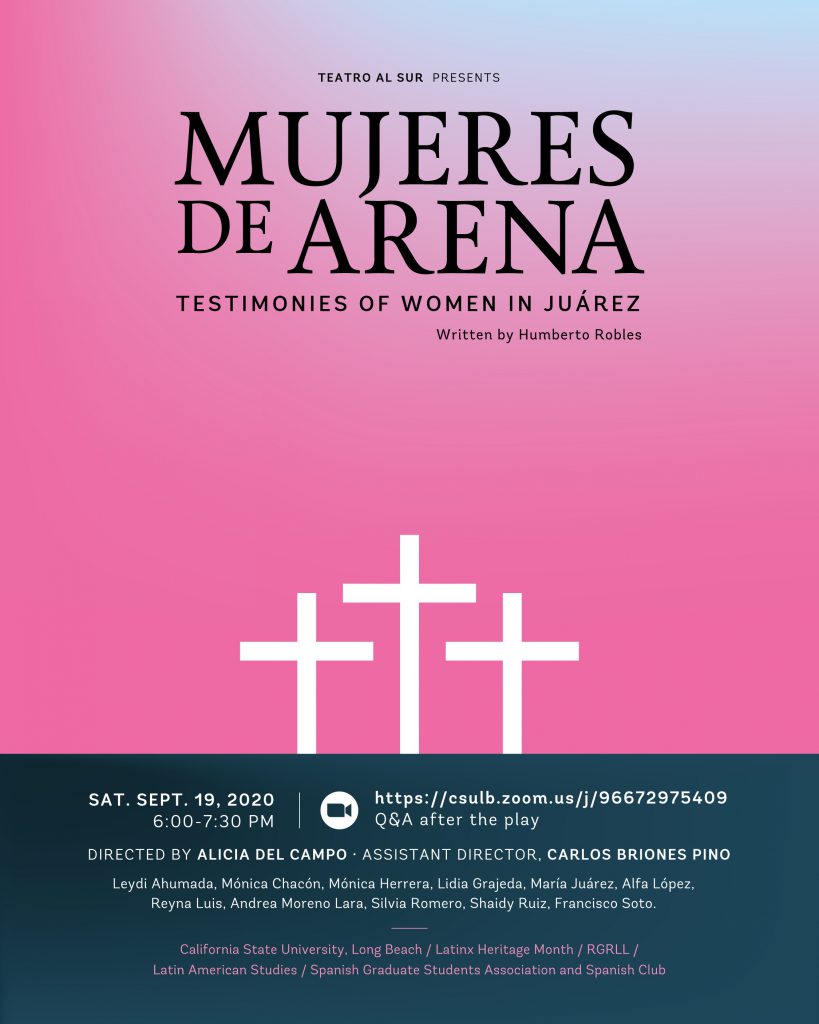 “The play is based on testimonies and materials recovered from the victims’ journals, etc.,” said Dr. Alicia Del Campo, Spanish professor and Teatro al Sur’s director. “The intimacy and detail of each girl’s story brings about the realness and closeness between us and the victims. Natalia, Micaela, Erendira, Lilia Alejandra could have been our friend, our sister, neighbor, or ourselves.

“They aren’t headlines or statistics: they had dreams and they liked to hang out with their friends. What happened to them was not only horrific, but the silences and dismissal of their cases may be deemed almost equally so,” Del Campo said. “The fact that the play is being performed in Spanish by Latinx actors that have, each, gone through their own struggles allows for storytelling through bodies that feel very strongly about these girls. The connection to the play is extremely personal and that is just real, it’s just there.”

Robles gave Herrera the rights to bring “Mujeres de Arenes” to CSULB. When Herrera presented the idea to Campo, it was an immediate yes. In March, after what she described as a long recess, Campo decided to bring back Teatro al Sur to perform “Tres Marias y una Rosa” on International Women’s Day, March 8 at the Museum of Latin American Art.

“All of the energy and the empowerment that came from that event led to the decision to stage Mujeres de Arena,” said Campo. “So many of my students felt a deep connection as Latinx women to the Juárez murders and disappearances, these cases of the truly disenfranchised, whose deaths have never been cleared up, dig deep into our own feelings of disempowerment here in the U.S.”

“When I talked to the writer he was really inspiring,” Herrera said. “Because I told him, you know it’s very dangerous what you’re doing and he said, ‘Oh yeah, I know that I can die at any moment, because I know that I am fighting with the government.’

As recently as January 2020, protesters and activists chanting “Not one more” took to the streets in Juárez after the killing of 26-year-old Isabel Cabanillas de la Torre, according to NPR, demanding justice from authorities and “an end to gender-based violence.”

“In theatre, it is always our task to speak for those who cannot speak for themselves, and to shed light on what the patriarchy would prefer to keep hidden, would wish we would forget,” said Campo. “Hispanic Heritage Month, as do other commemorative months or days, provides a microphone: a window in which our voices become a little louder. We wanted to take the chance to speak out, as loud as we can, for these girls, for women, and for all of us. Gender violence has only increased in the pandemic, inequalities have only become sharper and we hope to do our duties as citizens to push back.”

The play is also a part of CSULB’s Latinx Heritage Month Celebration 2020, which started Sept. 15 and runs through Oct. 15. The production of “Mujeres de Arena” is sponsored by Teatro al Sur Latin American Studies, RGRLL, the Spanish Graduate Students Association and the Spanish Club.