Things to do at home in Long Beach this weekend including... Quarantinis • the Hi-lo Support our COVID-19 coverage with a tax-deductible donation — Click here
- ADVERTISEMENT -

As Tito’s has established, several times, you cannot make hand sanitizer out of their vodka because it doesn’t have a high enough concentration of alcohol to properly rid your delicate phalanges of germs. Tito’s Handmade Vodka is 40% alcohol, while for a sanitizer to be effective, it must contain at least 60% alcohol, which led us down a rabbit hole only an office of clever, experienced drinkers might fall into, one where, at the very bottom we began looking for 120-proof spirits (liquors that contain 60% alcohol). But instead of trying to make our own hand sanitizer, we decided to get an expert’s take on how to make drinkable drinks with this knowledge.

Brandon Richardson of the Long Beach Business Journal suggested making quarantinis: “It’s just a martini, but you can’t go outside,” he said, a little glumly.

And what are its benefits? “You’ll throw up, but for all the right reasons,” said Steve Lowery, editor of the Hi-lo.

And who knows how to make a quarantini? Or a cocktail, under quarantine? Talmadge Lowe does. The co-founder of Hi-Lo Liquor was happy to offer a couple suggestions for spirits close to 120-proof, and yes, all the below ingredients are available at their Long Beach location, which at the moment, is working on stocking their snack section with more household essentials as shoppers continue to clear grocery store shelves. (Asia Morris) 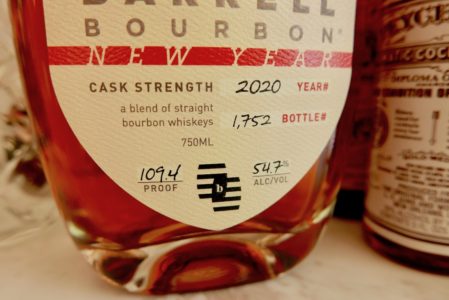 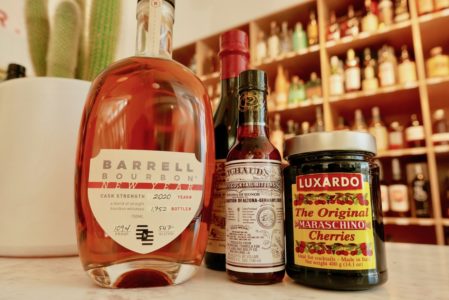 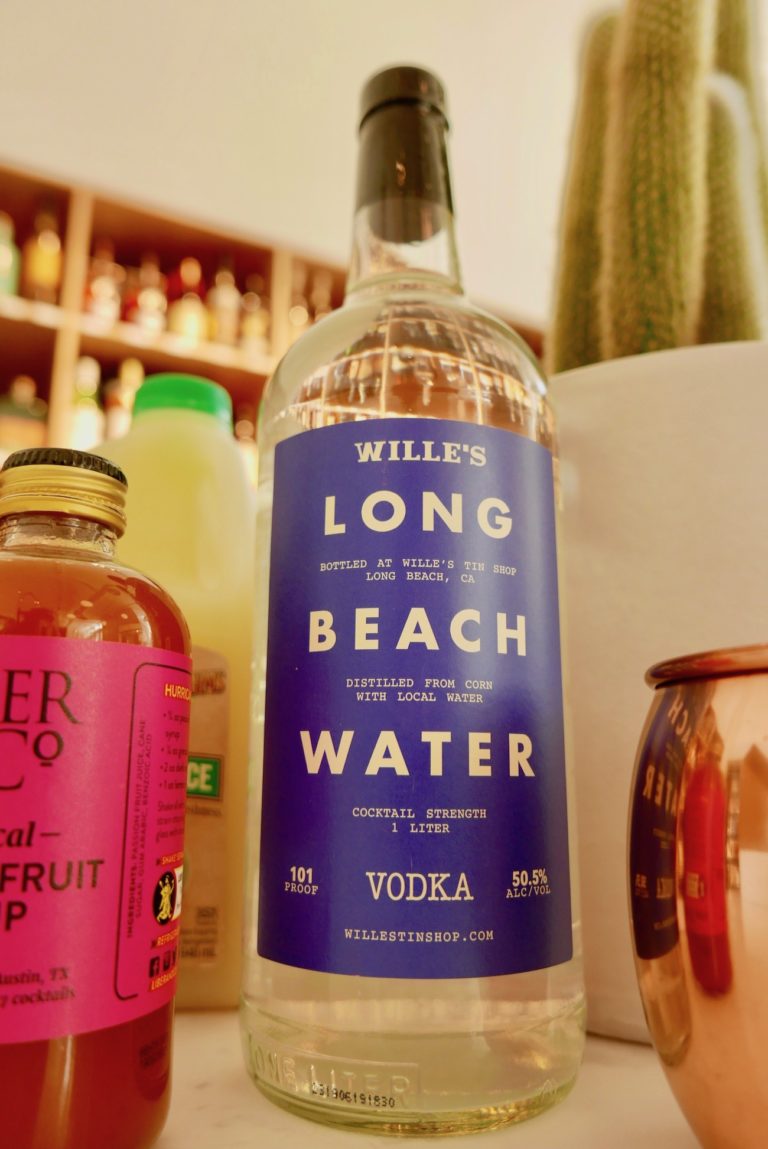 The Stay Inside Manhattan

Another great thing: The Washington Post recently discovered that one of our own, as in a fellow Long Beach resident, has filled up her calendar with Facetime chat appointments specifically over drinks since she was asked to work from home. So why not make a cocktail and share it, over the phone?

Giving us a moment’s pause: Instead of Aviation gin, as the picture above suggests, we highly recommend supporting local distiller Portuguese Bend and their Donna Rosa or Smoke Bay gins. Not to mention their master distiller, Simon Haxton, just came out with their very own hand sanitizer, which you can get for free if you spend $30 on food (to go) or a bottle of any of their spirits.

The people asked, we delivered. HOUSEMADE HAND SANITIZER 👏🏻 Get a complimentary sanitizer when you purchase a bottle or place a take out order of $30 or more. This high alcohol solution is made with purified water and essential oils (please note this is above 70% and for external use only). Come and grab a bottle or place your take out order and get it! 👌🏻 #portuguesebenddistilling • • #sanitizer #distillery #craftdistillery #housemade #longbeach #dtlb

A post shared by Portuguese Bend Distilling (@portuguesebend_distilling) on Mar 16, 2020 at 5:36pm PDT

2. ENJOY THESE CELEBRITIES AS HAND SANITIZERS

It may be difficult to find hand sanitizer on store shelves, but they do come pictured next to celebrities aplenty with this new health conscious meme that’s recently surfaced as a gentle and, shall we say, attractive reminder to keep your hands clean. Check out this thread of “Jennifer Lopez as hand sanitizers,” and for even more, the folks at High Snobiety have thrown together at least two-minutes worth of scrolling through these perfectly color coordinated matches. (Asia Morris)

Giving us a moment’s pause: Isn’t this literally objectifying women (and men)?!

"The 7," as you may have heard, has quickly turned into a list of things to do at home. Let Asia Morris and Steve Lowery tell you about a few of them, and then click here for the full list: https://lbpo.st/395SLy5.

3. DETERMINE IF YOUR CLOTHES SPARK JOY 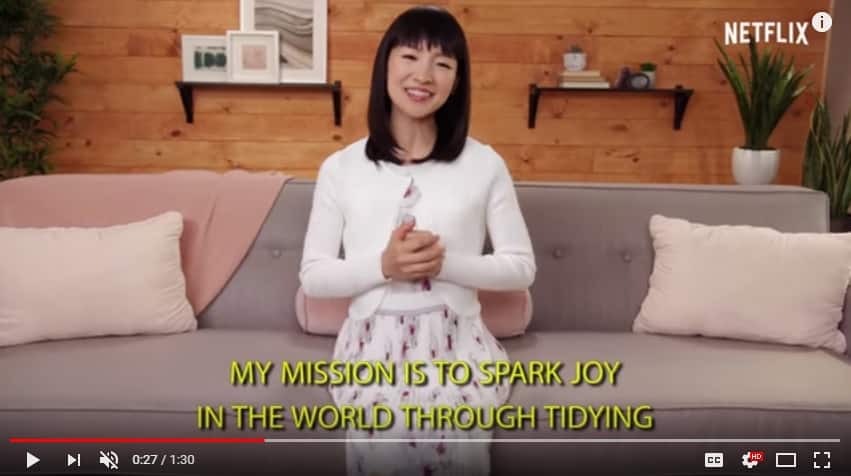 Screenshot from Netflix’s official trailer for Tidying Up with Marie Kondo, released Jan. 1, 2019.

According to household organizational expert Marie Kondo, to determine whether you can afford to let go of some of the items in your closet, simply hold these items in your hands and pay attention to how your body responds. A negative response may entail the feeling of being weighed down, a spark of joy may feel like every cell in your body lifting up. You may even feel weighed down with questions like, do I really need this waterproof jacket right now as rain drops hit your window? Not whether it “sparks joy.”

Anyway, since a lot of us will be holed up at home, maybe now the time to take a break from binge-watching Netflix shows, like “Tidying up with Marie Kondo” and a great time to actually, finally take some action by sorting through the clutter our consumerism generally breeds, for fanatic shoppers and minimalists alike; we all hold ourselves to different standards, right? (Asia Morris)

Giving us a moment’s pause: We may have gotten an email recently stating that local families are “waging war” against Kondo’s brash method of throwing things out. These families, apparently, are a part of a marketing ploy promoting UNITS Moving and Portable Storage, because apparently people aren’t tossing their junk, they’re packing things un-neatly into storage units. But UNITS wants to teach you how to save space, and money in storage. Did you know professional organizers say the average American household has 300,000 things? Thanks, UNITS. 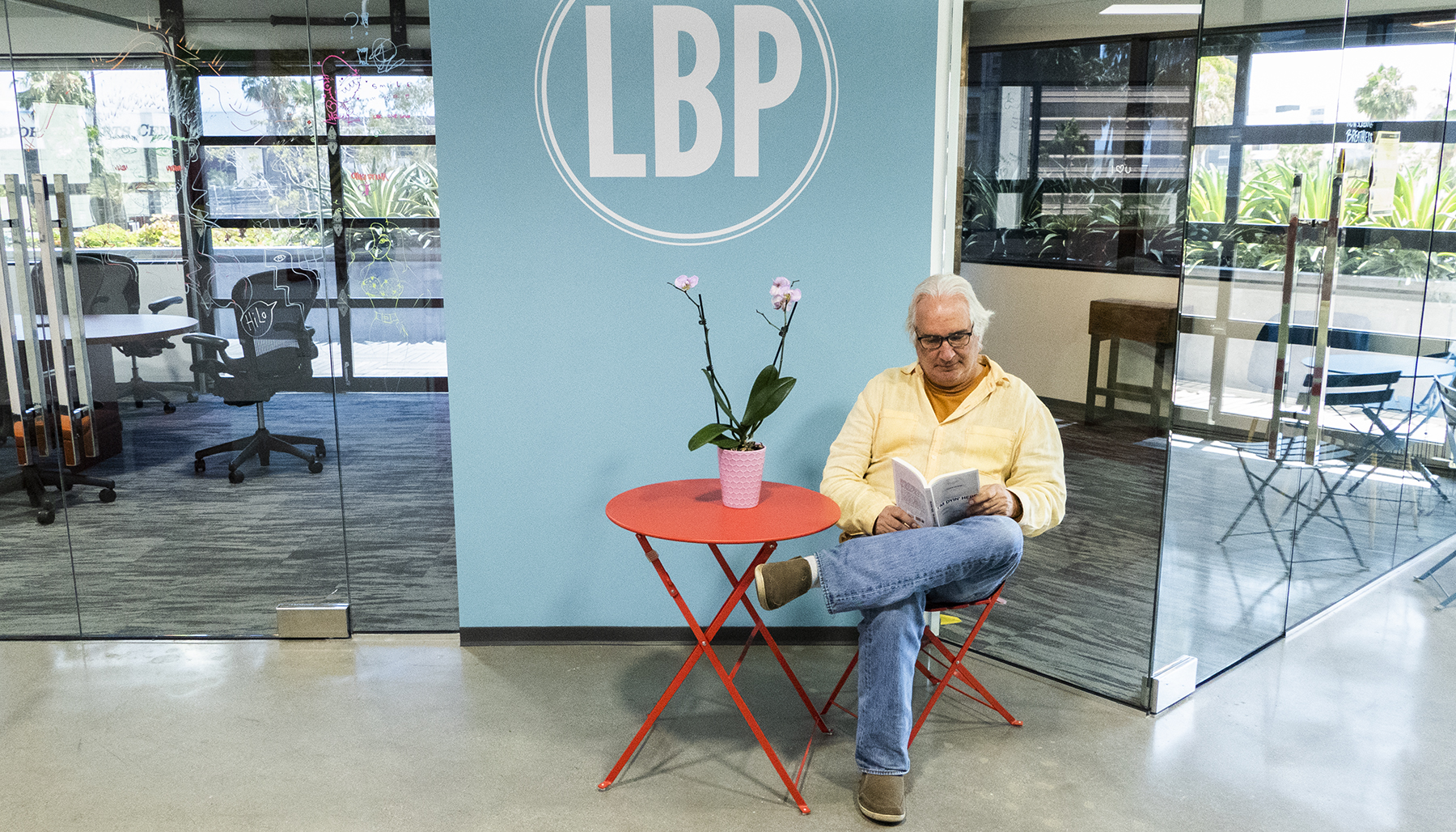 I was going to recommend Susan Orlean’s “The Library Book” of which I hear great things or Ben Lerner’s “The Topeka School” of which I’ve read great things or “The Old Drift” by Zambian author Namwali Serpell which may be the best of the bunch. But then I thought, I bet you’re as lame as me. That you have shelves and/or piles of books you started and haven’t finished. That to suggest you go get more books, destined to end up on shelves and piles, just wasn’t right.

So, instead, read all those books that you started and stopped for reasons that usually were that you didn’t have the time. Guess what? You do now. So, put your nose in “The Great Gatsby” that you never finished from AP Lit—thanks, Cliff Notes—hoist and plow through Shelby Foote’s “Civil War: A Narrative,” the three volumes that were a pillar of Ken Burns’ monumental Civil War documentary. The same three volumes that you told everyone you read and loved but when they pressed you for details, you’d just slowly shake your head, look off in the distance and mutter “devastating.”

The point is, you have plenty of books already in your home, plenty that you thought enough of to not only purchase but to decorate your home with. Get to them, you’ll feel much better and, theoretically, you’ll be smarter, wiser, jestier. (Steve Lowery)

Another great thing: Me? I’ll be jumping back into “Just Kids,” the National Book Award-winning autobiography of Patti Smith, detailing not only the poet/punk/icon’s early life but her relationship with artist Robert Mapplethorpe.

Giving us a moment’s pause: After that, “Falconer” by John Cheever and then “Pistol” by Mark Kriegel and then “The Crying of Lot 49” by Thomas Pynchon and then “The Metaphysical Club” by Louis Menand and then “Independence Day” by Richard Ford. That should get me through the weekend.

In the event that you’ve already exhausted your Netflix, Hulu and/or Amazon watchlists—and in that case, maybe you don’t need more screen time—may we direct you to the Long Beach Library’s streaming services, Kanopy.

What’s great about these services is they’re free and you need only a valid Long Beach Public Library card to get access to their catalog of 30,000 independent films, documentaries, art films and more. It really is great. In fact, Kanopy is what we thought Netflix was going to be when we signed up. In fact, a friend of mine calls Kanopy “Netflix for classy people.”

For instance, right now, Kanopy is offering groupings of films that include immigration in the 21st century, South Korean filmmakers, the female gaze and the great courses.

Another great thing: Everything from “Old Boy” to “Passion Fish”

Giving us a moment’s pause: If you’ve seen neither of those, you should get Kanopy immediately. 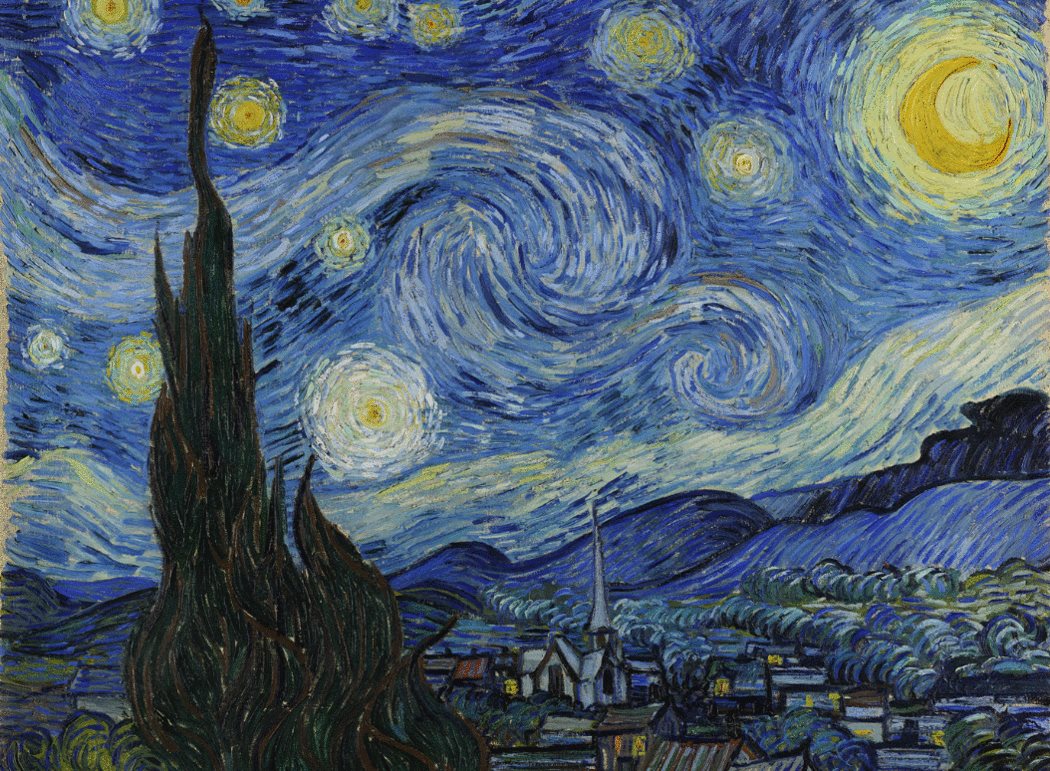 You know that feeling when you’re in a crowded museum and you feel a bit rushed hopping from painting to painting? Or maybe there’s a loud know-it-all standing behind you, explaining the significance of Van Gogh’s “Starry Night” for all to hear, whether you paid for a tour or not? Well now you can check out over 1,200 international museums from the comfort of your own couch using on Google Arts & Culture. Click here to be directed to 10 of those museums, including The British Museum in London, New York’s Guggenheim Museum, and the Pergamon Museum in Berlin. (Asia Morris)

Another great thing: If you’ve been on the Interwebs lately, perhaps you’ve seen this digital rendering floating around (originally posted to Reddit five years ago) of a hauntingly empty diner, inspired by Edward Hopper’s famous 1942 painting, “Nighthawks,” except instead of three customers leaning on the counter seemingly lost in their own thoughts, it’s, like we said, very, completely empty inside. As in no signs of life. 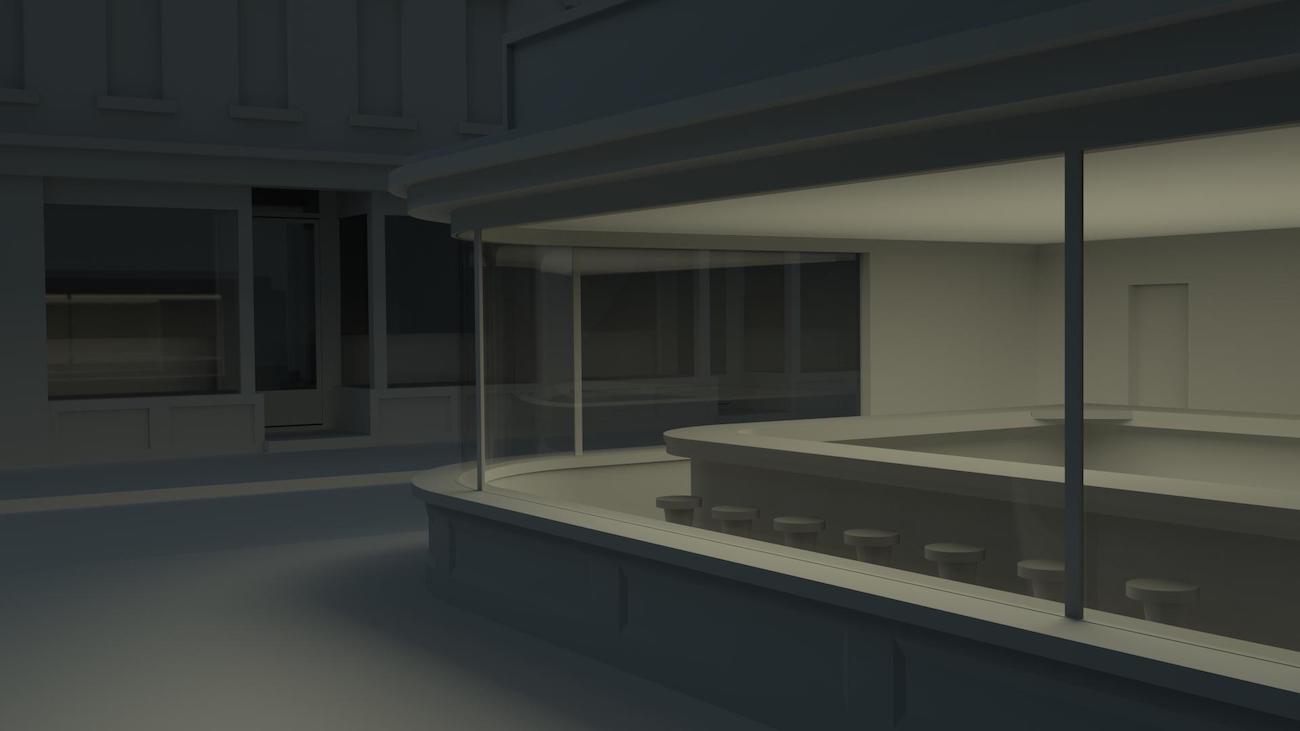 While art history buffs may have caught on quickly, those without immediate knowledge of this readapted nod to people not going out, can read up on one of the most recognizable works of 20th Century art right here. It’s just one of the artworks worth clicking through in The Art Institute of Chicago’s online collection of nearly 60 Modern Art pieces, a feature offered alongside the museum tours on Google Arts & Culture. (Asia Morris)

Giving us a moment’s pause: It’s a bit frustrating, clicking, instead of walking your way up The Guggenheim Museum’s spiraling ramp of never-ending art, but we figure, with a little patience and since we all have a more time on our hands, why not?

No matter the challenge or crisis, one thing that will always remain true about human beings is our unquenchable desire to appear smarter than other human beings. But how does one accomplish this? As item No. 4 proves, certainly not by reading.

Luckily, there are numerous, straight ahead, documentary/educational shows on all the streaming services that will fill your head with the kind of useless knowledge so useful to drop in mid-conversation that will have others saying, “Does that guy ever shut up?”

One of my current favorite make-me-smarter shows is the French-produced “Great Greek Myths.” Yes, it’s not the most creative of titles, but it will walk you through one of the source materials of most of Western literature and does it in a cohesive, compelling manner, utilizing animation and numerous classic works of art that makes for, and I’m not making this up, very entertaining viewing. No. Really. (Steve Lowery)

Another great thing: Another favorite is “Great Artists with Tim Marlow.” Again, it appears no one was spending a lot of time on the title with this one, but these 23-minute shows, delve deep into the lives of the world’s most iconic artists—Leonardo. Michelangelo, Rembrandt, Vermeer, etc—and does it without getting breathy. Marlow has questionable taste in sports coats but is exceptional in not only breaking down brushstrokes but showing you the real person behind the painter.

Giving us a moment’s pause: Been thinking a lot lately about Caravaggio’s mysterious death. What? You weren’t aware that Caravaggio’s death remains shrouded in mystery? As you know, the Italian whose style heavily influenced the development of the Baroque style of painting, killed a man in a sword fight. What? You didn’t know that. Well, as you know …