Things to do in Long Beach this weekend including... 'Cinderella' and Hello Kitty • the Hi-lo
- ADVERTISEMENT -

Performance arts abound this weekend, with the premiere of Musical Theatre West’s “Rodgers + Hammerstein’s Cinderella” and the return of Baroque orchestra Musica Angelica to the stage. We’ve also found some noteworthy shopping opportunities, such as a Hello Kitty pop-up, and the return of a sprawling tamales festival. 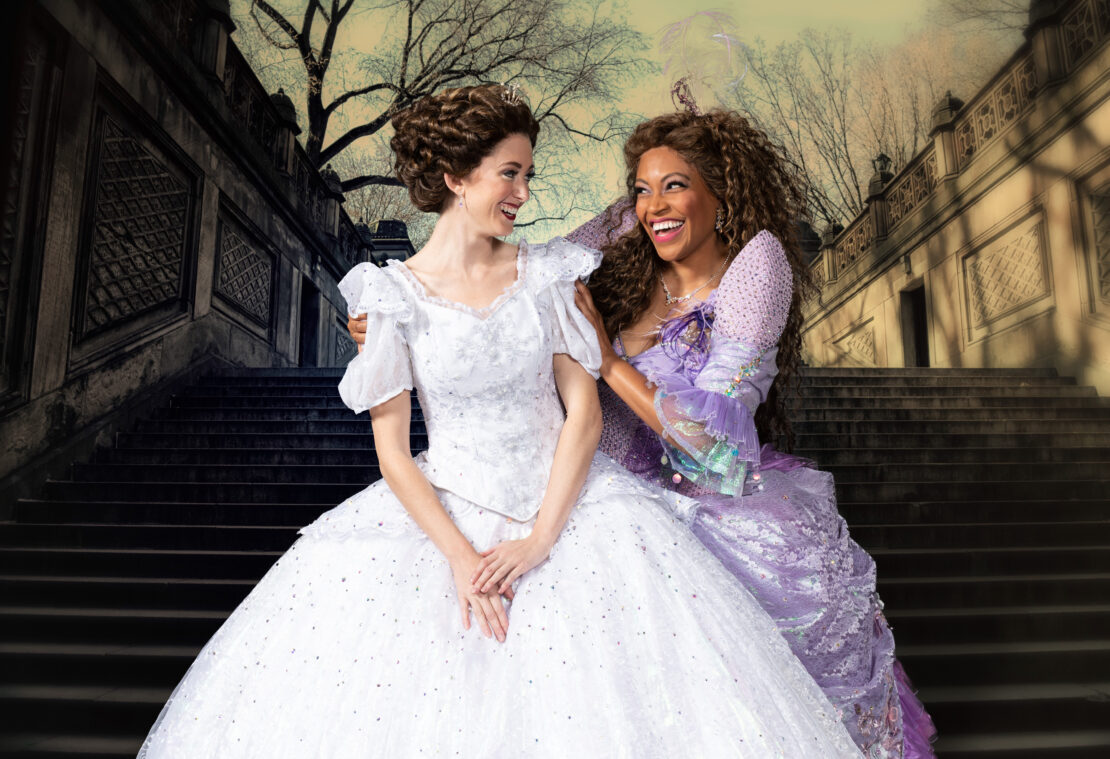 Musical Theatre West is premiering its final show of the season with “Rodgers + Hammerstein’s Cinderella” on Friday, Dec. 2, the musical rendition of the classic pauper-turned-princess fairytale first written for television by legendary composers Richard Rodgers and Oscar Hammerstein in 1957.

The theatre company’s version of the popular TV musical will follow the format of the Broadway play, which was created in 2013, and includes several new characters—even a sympathetic stepsister—but has all the iconic musical numbers such as “Impossible” and “In My Own Little Corner.” Our Millennial readers would most certainly remember the performances by pop singer Brandy and Whitney Houston in Disney’s 1997 film.

Musical Theatre West is pulling out all the stops for the production, with stunning costumes, set designs and a stellar cast, many hailing from Broadway. Performances will run on various dates through Dec. 18. There will also be a special ASL-interpreted performance on Dec. 9. Tickets range between $20-$120. Click here for more information and to purchase tickets.

“Rodgers + Hammerstein’s Cinderella” will be performed at the Richard and Karen Carpenter Performing Arts Center at the Cal State Long Beach Campus at 6200 E. Atherton St. Note: Parking is not included. 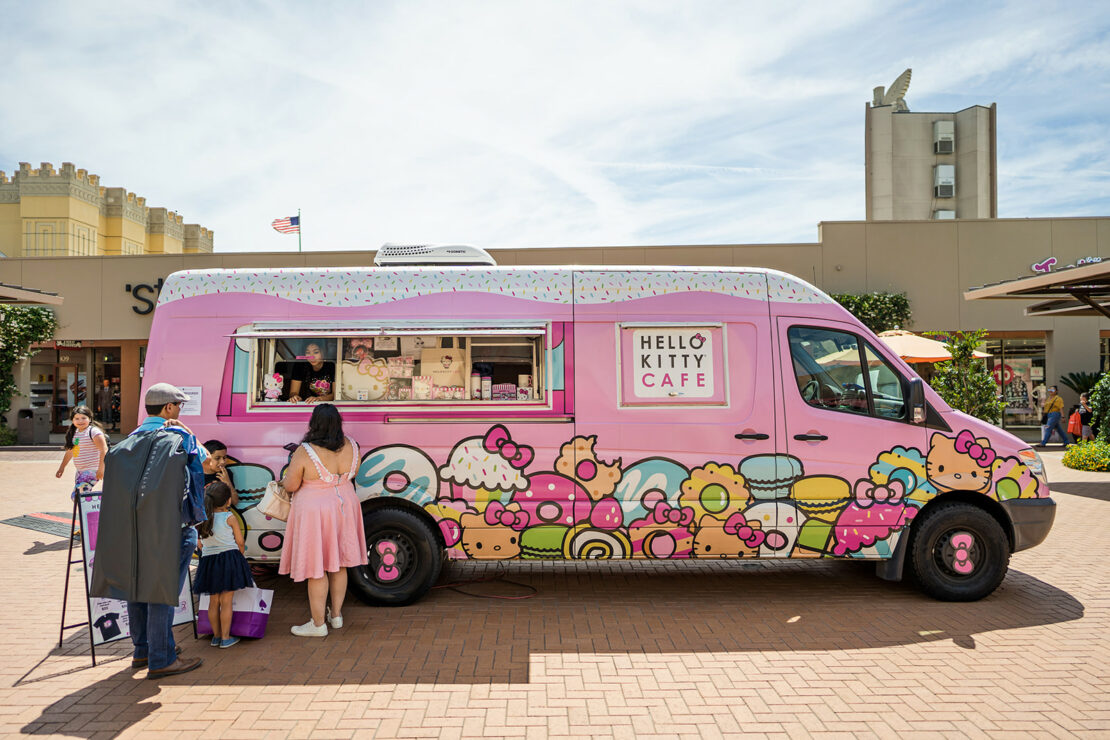 This traveling Hello Kitty business is stopping in Long Beach Saturday, Dec. 3, meaning Long Beach-ers, you get first dibs on all those cute and adorable Hello Kitty merchandise and desserts.

And for those of you who somehow missed the cultural phenomenon that is Hello Kitty, all you need to know is that it’s a super famous character created by the Japanese company Sanrio that’s now come to include a whole family of cute, or kawaii, characters like frogs, bunnies and pandas. Basically, kids—even some adults—go nuts over it. 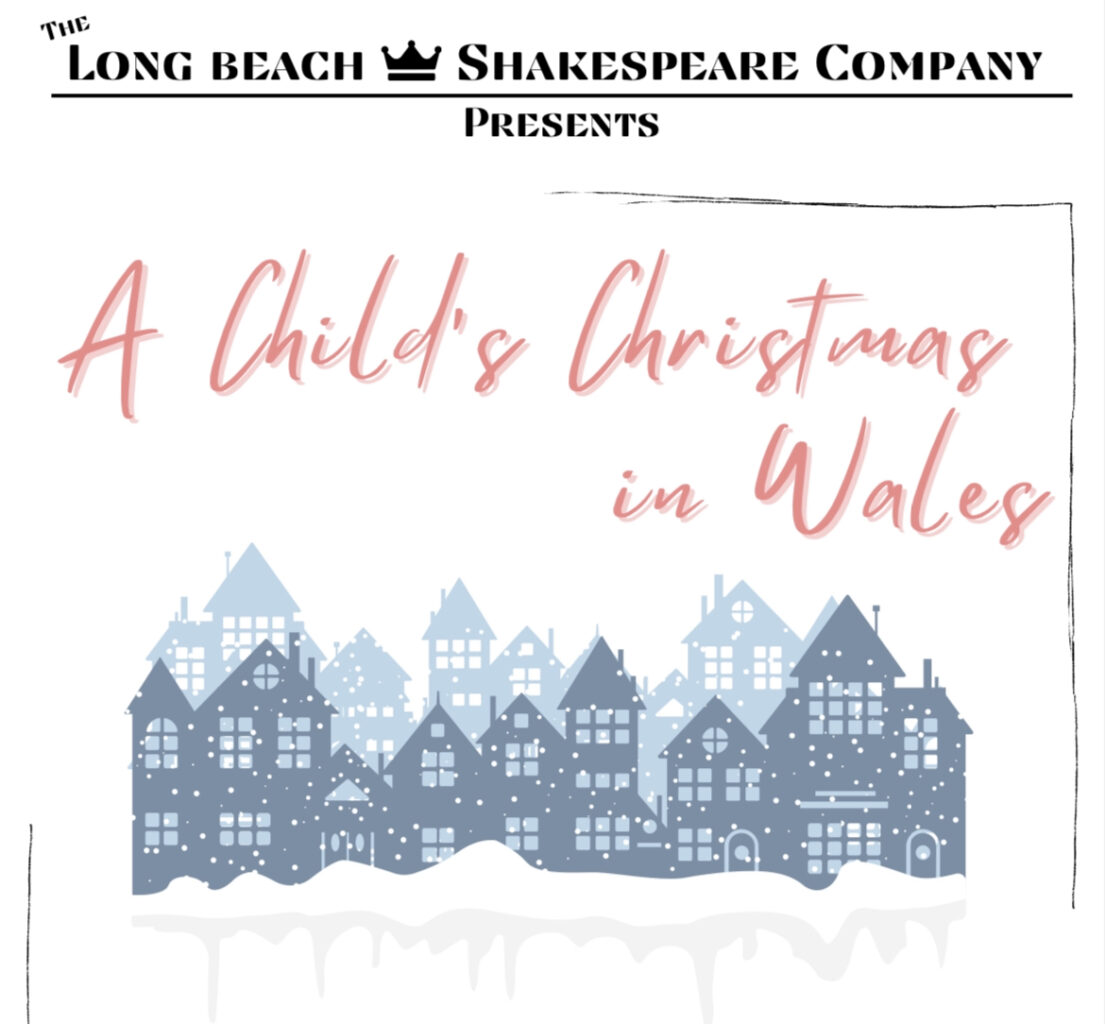 Courtesy flyer of the Long Beach Shakespeare’s production of “A Child’s Christmas in Wales.”

The fine folk of the Long Beach Shakespeare Company are performing a musical production of “A Child’s Christmas in Wales” by Welsh poet Dylan Thomas on Saturday and Sunday, Dec. 3 and 4 at the Helen Borgers Theatre.

Thomas’ work was not originally created for the stage but as a poetry work about Christmas through the perspective of a young boy. The poem has been adapted into a play and a TV show since it was published in 1955 becoming another heartwarming—albeit less well-known—classic to enjoy during the season.

Tickets for the Shakespeare Company’s production cost $23 for general admission or $13 for students. Click here for more information and to purchase tickets.

The Helen Borgers Theatre is at 4250 Atlantic Ave. 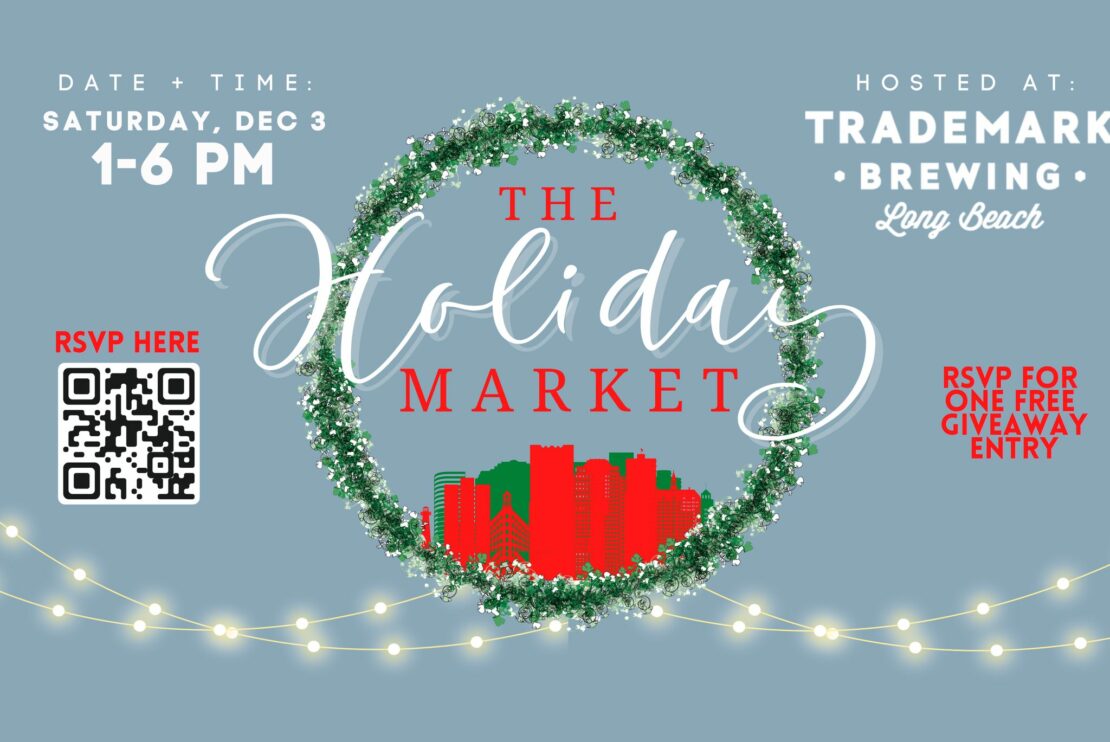 If perusing local businesses at a local brewery with a local beer in hand sounds like the sort of shopping experience you can get behind, then this holiday market at Trademark Brewing Saturday, Dec. 3, will be the place to be.

Fifteen small businesses will be setting up shop at the brewery, selling handmade goods, art, jewelry and plants. And of course, you can enjoy a beer or two from the brewery while you shop. The event is free to attend, but those who RSVP can enter a raffle to win a special prize. 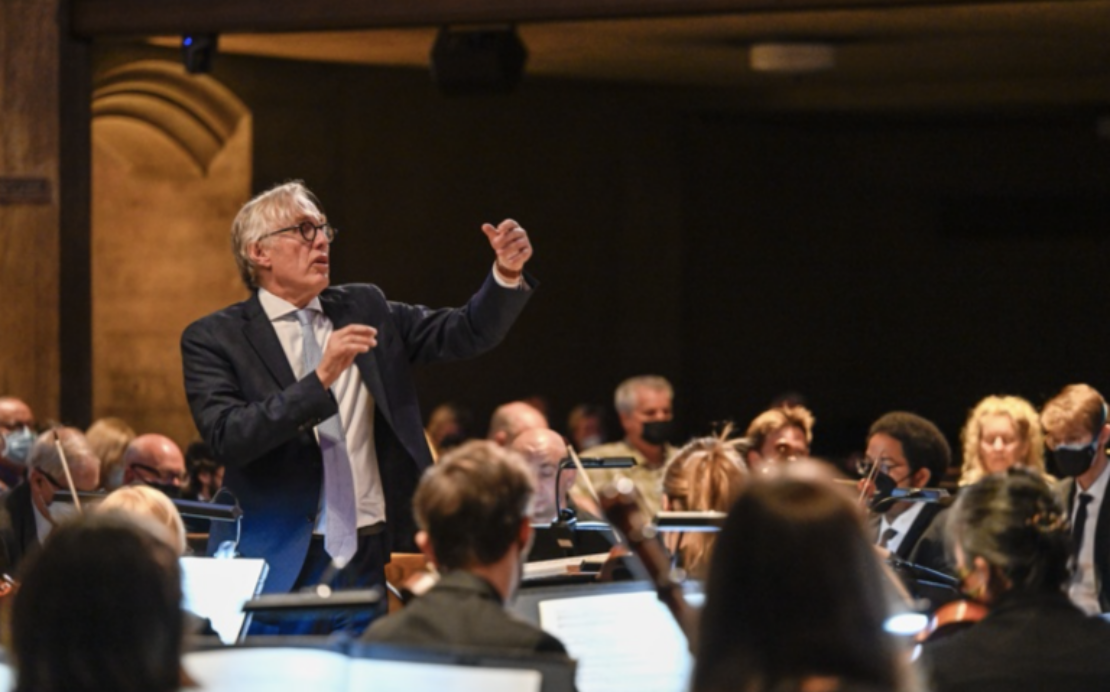 Returning for its 30th season, Musical Angelica, the Long Beach orchestra that performs compositions from the Baroque to the early Classical Era, will be kicking off its season of shows on Saturday, Dec. 3, with one of the company’s most popular performances, A Baroque Christmas.

The show’s program features music that strikes a strong Christmas chord from seven Baroque and Classical composers including Bach, Vivaldi, Mozart and Franz Joseph Haydn. Tickets for the concert range from $58-$80, however, those who’d like to splurge may also purchase tickets to a pre-show VIP gala for $250 including concert tickets. 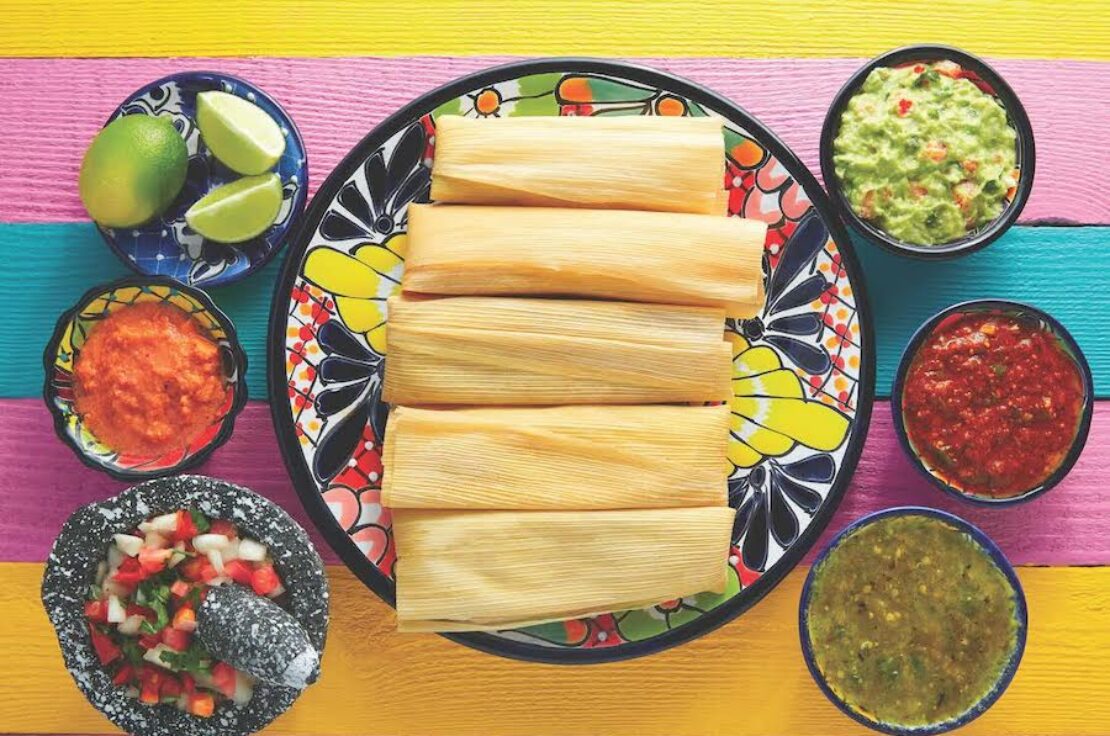 Now in its second year, the Long Beach International Tamales Festival will be a daylong celebration, honoring the art, flavors and diversity that is the tamale with regional takes on the tender dish. And all in one place.

From noon to 7 p.m. at Long Beach City College, attendees can devour tamales and other Latin-inspired cuisines from local and regional vendors and restaurants. The event also promises tequila tastings, live Latin music, Aztec dance performances and a tamale-eating contest.

Tickets for the festival cost $15 and may be purchased online. Click here for more information and to purchase tickets.

SPONSORED BY THE AQUARIUM OF THE PACIFIC

Aquarium Holidays begins with this festive weekend and continues through December 23 featuring festive décor, shopping, snowfall in the Great Hall, appearances by Santa Diver, and a gingerbread house display. On weekends December 3 through 18 the Aquarium will have photo opportunities with Santa and a snow play area. Also during the first weekend of Aquarium Holidays (Dec. 3 and 4), the Aquarium will host Kwanzaa and Hanukkah storytelling.

SPONSORED BY THE AQUARIUM OF THE PACIFIC’S FIRST WEDNESDAYS 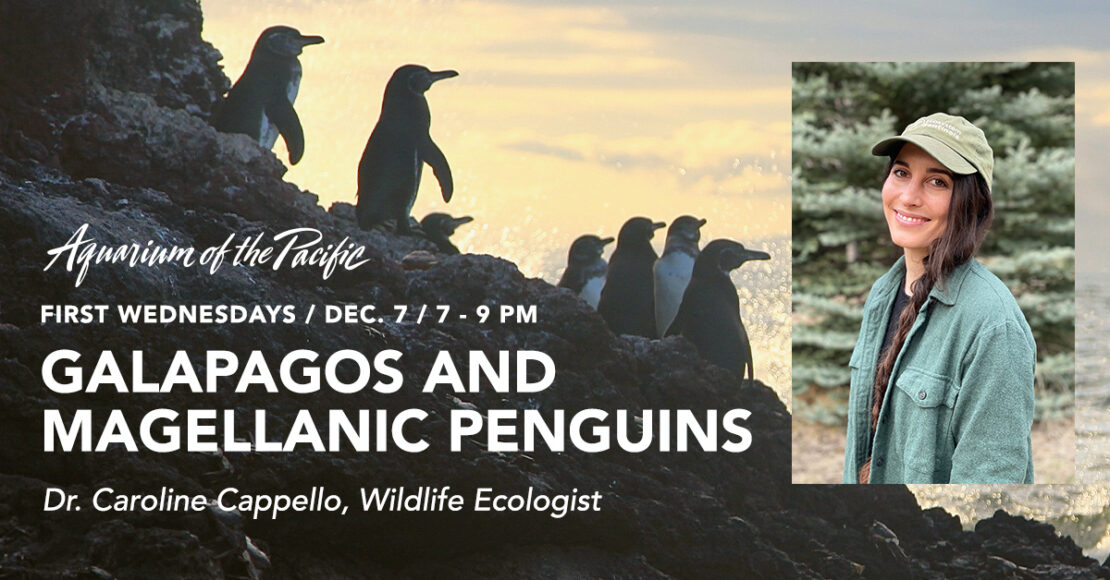 This FREE event from 7 p.m. to 9 p.m. Wednesday, December 7 features wildlife ecologist, Dr. Caroline Cappello. An immersion in photos and stories of penguins from Argentina and Ecuador. As a conservationist with a doctorate from the University of Washington, Capello specializes in the ecology of penguins. When not in the office, she can be found boating along the coasts of the Galápagos Islands in search of breeding penguins or living with over 200,000 Magellanic penguins in their colony at Punta Tombo.

This event will include a complimentary holiday drink and cash bar cocktail hour, music, holiday card making and paint-a-fish activity. The talk will take place in the Honda Pacific Visions Theater, with the rest of the evening set to be in the Pacific Visions Art Gallery. Reservations are required and may be made online or by calling 562-590-3100.

This program is sponsored by:
The Courtyard by Marriott Long Beach Downtown
Stephen and Brenda Olson
Ralph and Hazel Osborn and Lois J. Roork Trust 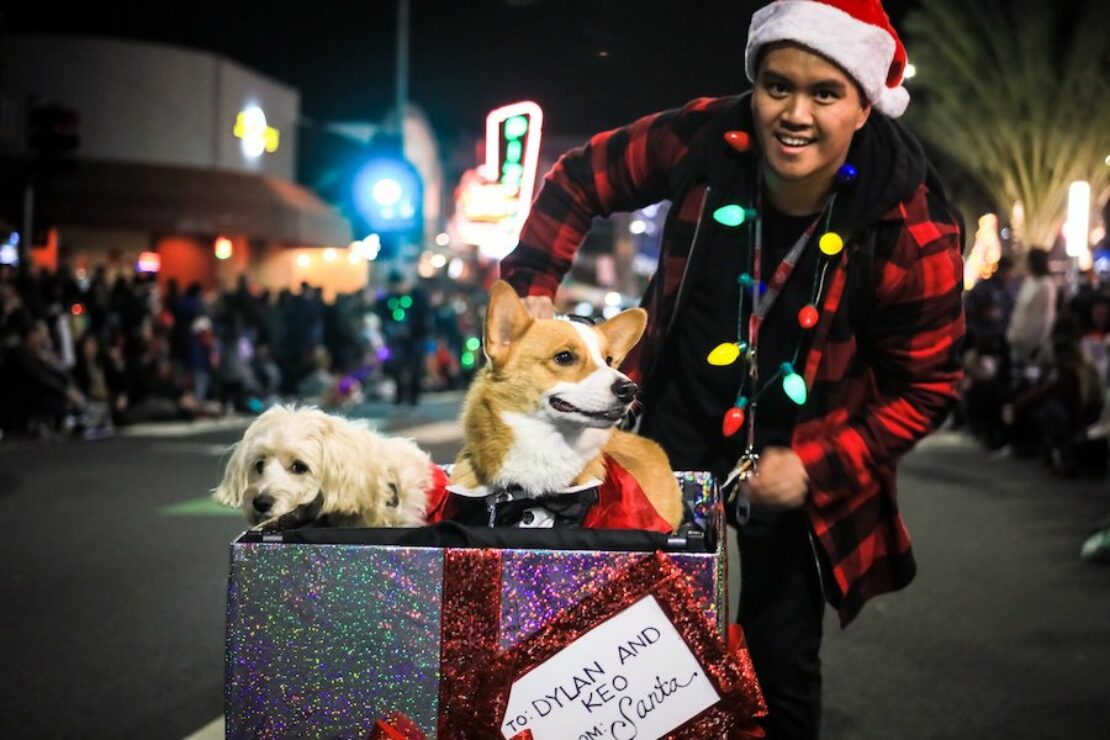 The spectacle of lights and glitter will promenade through the 15-block seaside business district on Saturday, Dec. 3. Organized by the Belmont Shore Business Association, thousands of families watch the parade each year, getting a sentimental feeling as they wave at the more than 100 elaborately decorated floats and walking entries — including Santa, in his festooned sleigh atop a fire engine, as the grand finale.

Among the high school marching bands, drill teams, elected city leaders and local beauty pageant titleholders, there are clear crowd favorites that return year after year, representing a who’s who of local businesses and organizations.

For more about the 1.2-mile parade, taking place from 6 to 9 p.m. Dec. 3 between Livingston and Bay Shore Avenue, including the parade lineup, visit BelmontShore.org. The event also will be streamed live on that website.