Curated by artist Juan Gomez, whose work is part of the collection, “Sentinels” could easily be considered one of the latest local endeavors by artists to get their work seen in person while the pandemic has largely halted traditional ways of seeing art, i.e. inside a museum or gallery. So, in a safe, socially distanced manner, Gomez decided to market “Sentinels” as a more accessible way to view art.

There’s even a map to go along with it.

“The show is available at any time of the day, the show is outside, and viewers can continue to practice social distancing while viewing the show,” Gomez said. “Also, even though each utility box can stand on its own as a unique artwork, it has so much more depth when seen as a group exhibition.”

Artist duo Kiyomi Fukui and Michael Nannery collaborated on a box using not the usual paintbrush or spray cans but, instead, discarded coffee cups. Their cloud forms, made with repetitions of the alternative mark-making devices, may seem fluffy and reflective of a soothing sky at sunset, but speak to the anxiety often felt when one attempts to assess the vast amount of waste produced by consumer culture.

“As much as we strive to stay mindful, it is so easy to give in to the convenience of disposable products,” the two said in a statement. “Perhaps feeling the guilt of our single-use habits, or out of our desire to create meaning from what may be considered waste, we started collecting used coffee cups to be used as vehicles for art making (before the beginning of the pandemic).” 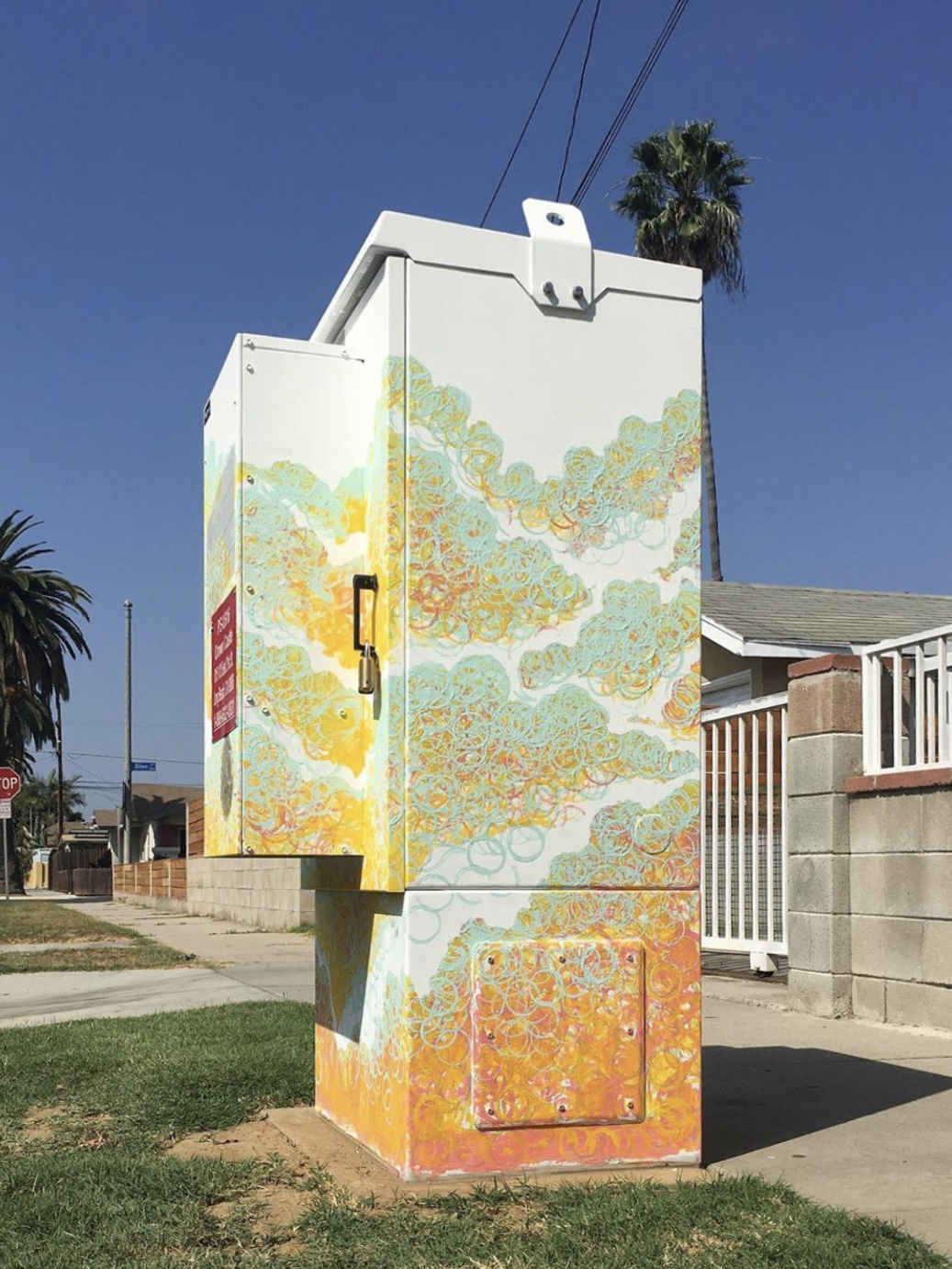 Artist Stephanie Sherwood’s utility box mural was based on her Snapshot Series where, over the past year or more, Sherwood has been creating ephemeral pieces that last only as long as they can survive outside in the street, painting on items such as discarded furniture. Some of these works were recently featured in Durden and Ray’s outdoor art exhibit We Are Here / Here We Are.

“With that in mind, I decided to use imagery based on photographs with some of my closest friends I made during my time in Long Beach at CSULB. My homage to the city,” Sherwood said. “Of course those gestural marks are incorporated into the final piece which is a part of my Confine Series: imagery of soft, fleshy forms bound within cage-like structures.” 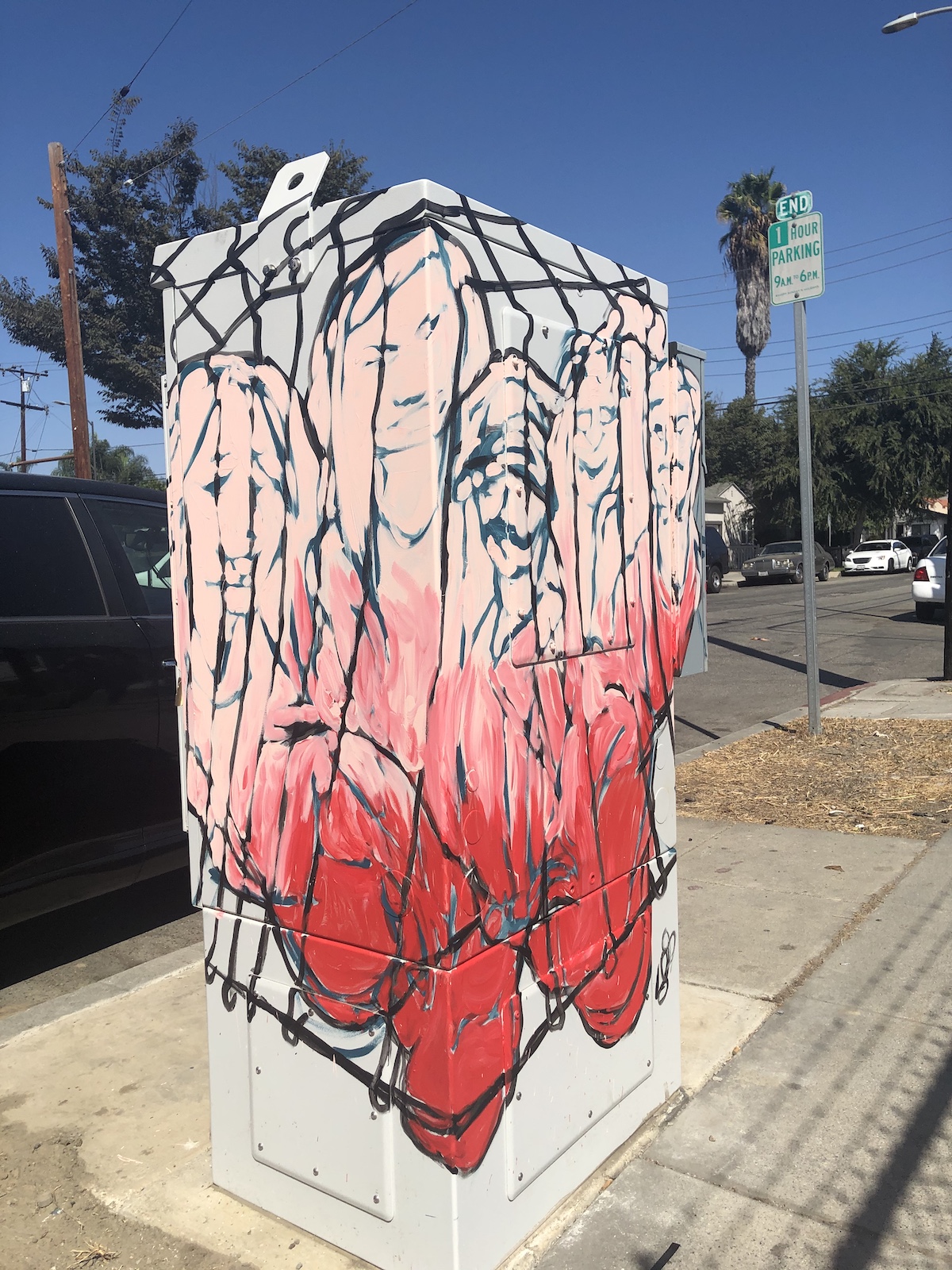 With this, his first curatorial endeavor, Gomez said he hopes “the imagery will offer viewers some solace in this odd time. I hope that they can connect with the work somehow and find elements of it to be thought-provoking.” 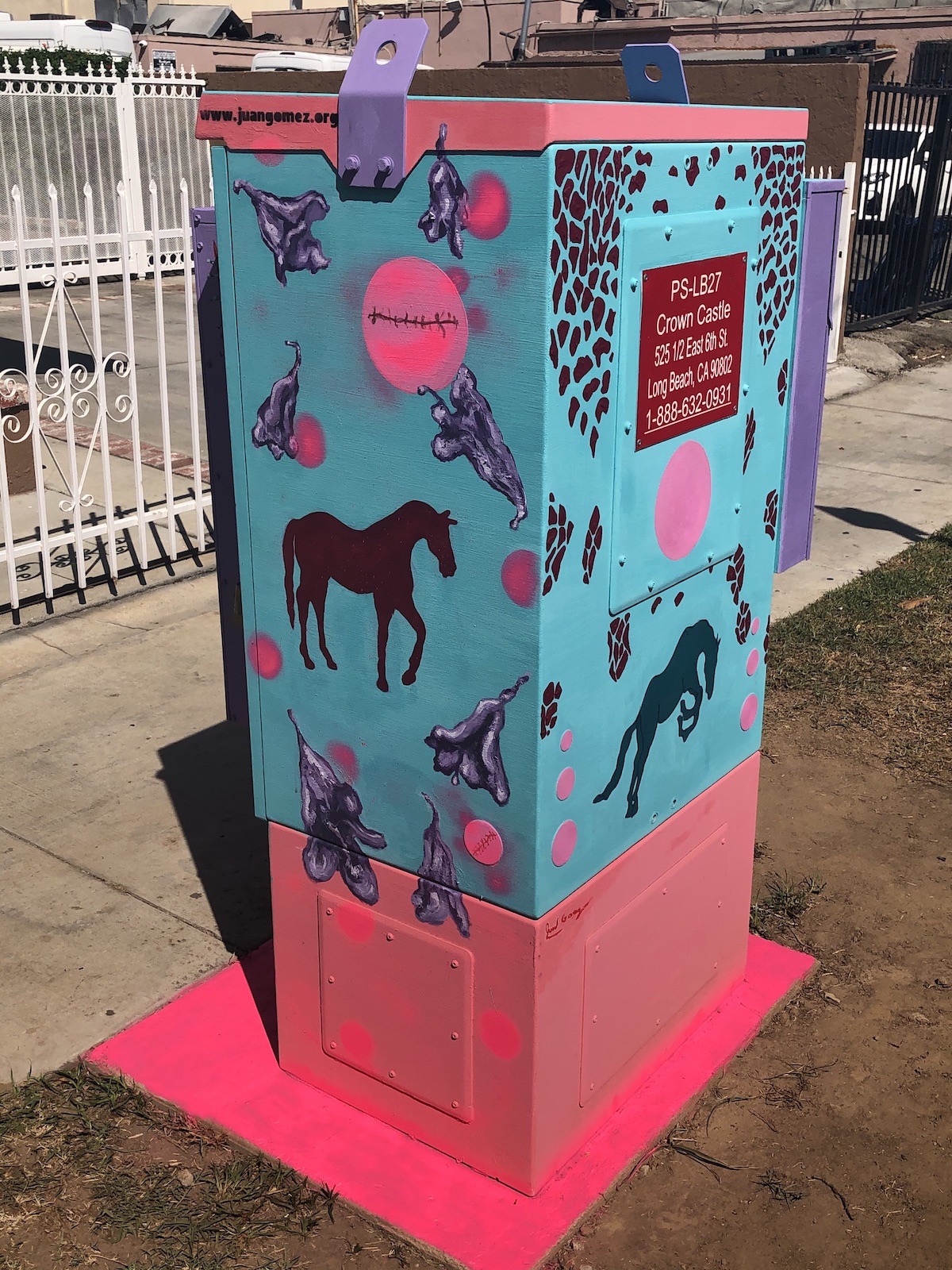 Gomez said he’s already noticed that certain passersby have taken ownership of the art, in particular of a certain animal he painted, and finds that encouraging.

“On one particular day that I was painting, a little girl coming out from her home was so excited and yelled, ‘My unicorn!’ Her mother then explained that she claimed the image of the horse I was painting as her very own unicorn,” Gomez said. “That made it all worth it! No matter the age or background connections will be made. Each utility box has a story to tell with many opportunities for the viewer to interpret the work within the context of their own lives.”

For all utility box locations, check out the Google Map here.