Throw out the relentlessly American Super Bowl, like the rest of the world tends to do, and your global Granddaddy of Them All is the World Cup soccer championship in which 32 countries—extra points if you can name them all—battle for the title as best in the world, giving that country bragging rights until the next cup, four years down the line.

Where can you watch it? Well, if you like watching by yourself or in a small group, you can catch it on TV on Fox, Fox Sports or Telemundo. That’s fine; we’re not mad at you.

But if you want to enjoy it as it’s meant to be enjoyed, in a wild, celebratory setting, sitting amid the madness of crowds, you need to go where those crowds go.

We’re not saying there’s going to be an uptick in day drinking from now till Dec. 18, but the best places to go crazy with soccer fans just happen to be bars. Use your discretion wisely.

In Long Beach, Legends Restaurant and Sports Bar, at 5236 E. Second St. is the first modern sports bar in the nation and still the No. 1 spot in Long Beach for watching athletic competitions. The bar will be showing a host of matches, including those starting at 8 a.m. 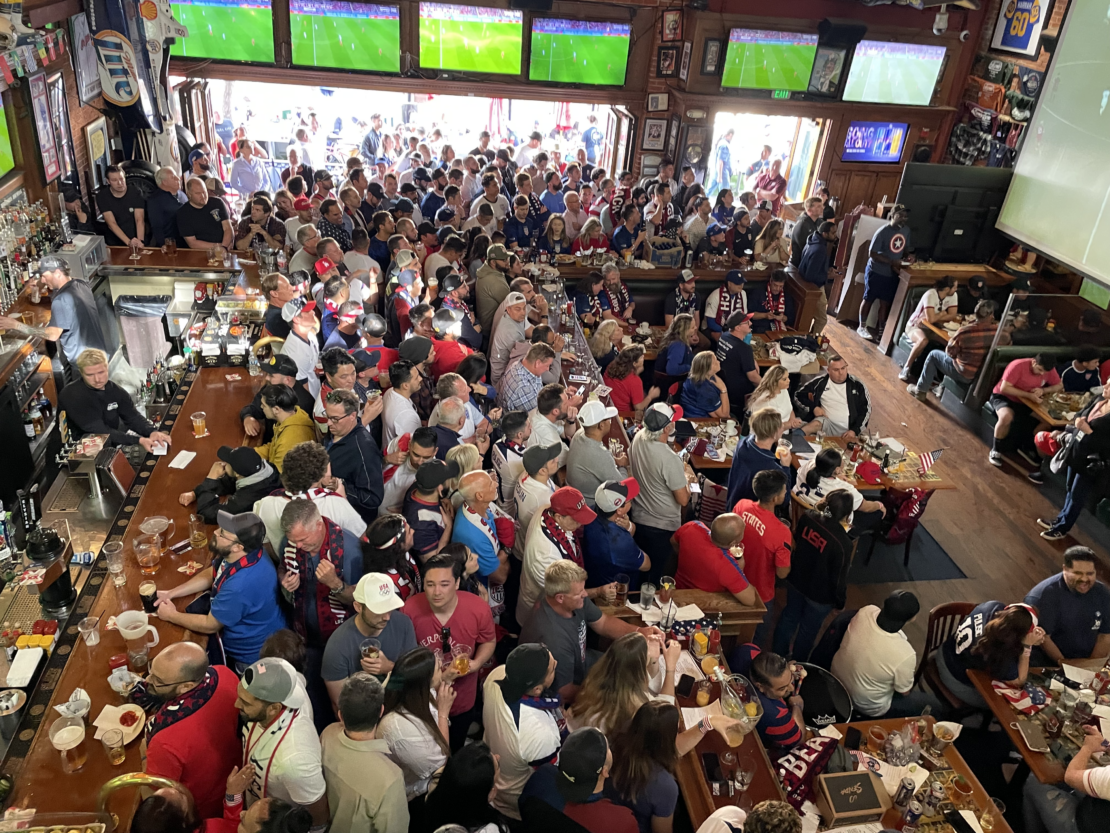 Legends was already packed for the World Cup on Monday, Nov. 21, 2022. Photo by Mike Guardabascio.

For the remainder of this week Legends will be open for the 8 a.m. matches today between Argentina and Saudi Arabia and Mexico vs. Poland; and, at 11 a.m., defending champs France vs. Australia.

Some additional matches to be shown are tentative, depending on staffing, according to co-owner Eric Johnson. These include Wednesday’s match between Spain and Costa Rica.

Gallagher’s Pub and Grill, 2751 E Broadway, was wild on Monday morning for the USA vs. Wales match, which ended in a sister-kissing 1-1 tie. Owner Ciaran Gallagher said his popular bar would be open early for all the important games: “Every game with Mexico, the US, Argentina, Brazil, France—we’ll have all the big ones. Then, for the second stage onward, we’ll have the early games as well.”

Bars showing all 8 and 11 a.m. matches include: