The process is hypnotic: Gopi Shah firmly throws a cylinder-ish lump of clay onto a still pottery wheel, making an indentation and starting the wheel up after centering it just right. Using a soaking wet sponge, she presses down into the center, shaping the outside with her hand. Like magic, a cup shape rises from the wheel.

Shah gets in a meditative rhythm while creating in her garage studio, making dozens of mugs, tumblers, plates, planters and other functional items a day. Each item is nearly identical to the others in their set, but unique at the same time since she doesn’t use molds.

She’s fast, too: Shah has cup creation down to 12 minutes each for throwing, trimming and glazing, although the entire drying and firing process can take up to two weeks to complete. Some days she can reach up to throwing 60 mugs. During the holidays, she’s working non-stop— she can hand-make up to a thousand items for a season.

The 34-year-old started pottery almost 20 years ago in high school where her teacher mentored her and helped her grow in the art. The lessons she learned then still stick with her to this day.

“A lot of the drawings I do, I think it’s because my high school teacher always said, ‘Anyone can make a pot, but it’s really what you do off the wheel that matters and what defines you.’ And that still carries with me now,” Shah said. “And so it’s like, yeah, anyone can make a mug. But to make it my own unique mug, I like to decorate it in different ways.”

Her favorite part of pottery is throwing. Getting the centering just right is a crucial part of the process— it took her nearly three months to nail down the skill when she first started.

She eventually stopped in college, but she missed it: The peace and calm that comes with working with clay was absent in her life.

“I mean if you talk to anyone who’s taken one pottery class, they fall in love with it,” Shah said. “It’s very hard to not love it. Especially now in today’s world, everyone is on their computer a lot, we don’t really have as much access, I think, to something as ubiquitous and as earthy as clay.

“And, there’s just something, I think that there’s a connection with humans and working with their hands. And I think people miss that. And so they really appreciate it when they get it.”

After graduating, she got a job at a non-profit in Santa Monica and went to Santa Monica College for its ceramics program. Her partner encouraged her to start a business of it and when they moved to Austin, Texas, she thought it was as good a time as any to start one. She opened an Etsy shop and worked with a mentor there to develop her skill. By the time she and her partner moved back to Long Beach, her business was on its feet.

Representation of women, and particularly women of color, is small in the pottery world. The hobby can be cost-prohibitive: the equipment and space alone cost thousands of dollars. Thankfully, more studios are popping up to allow people to get into it, Shah said. Before building out her own garage, her workspace was the Icehouse Arts Complex in Long Beach. 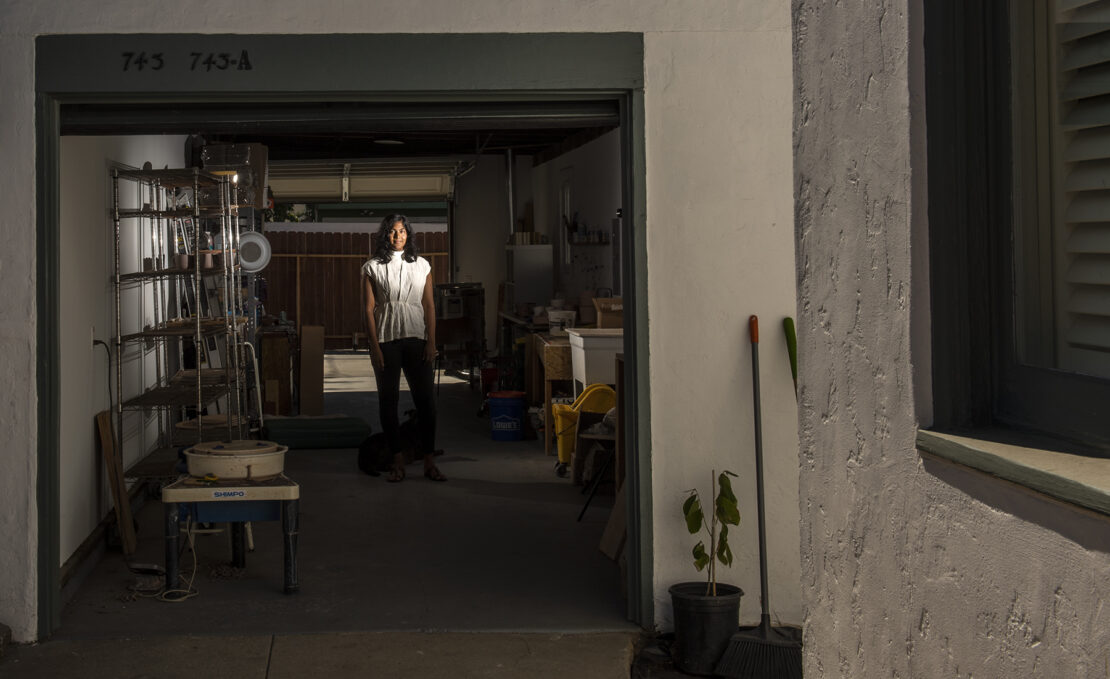 Gopi Shah stands in the middle of a shotgun garage which is her workspace where she makes her handcrafted ceramics and pottery designs in Long Beach Tuesday, July 27, 2021. Photo by Thomas R. Cordova.

For Shah’s parents who immigrated to the U.S. from India, it was hard for them to accept pottery being her career. Her parents worked hard to give her and her sister good educations, hoping they would both go in a more traditional route that included jobs with regular paychecks. She felt her mom was ashamed when she first started her business because the job is considered lower in India.

“Even when we went back to India, I was like, ‘Oh, I’m a potter.’ And my mom’s like, ‘Well, she used to be an engineer, but now she’s a potter,’ which is hilarious because I don’t have an engineering degree,” Shah said with a laugh. “… I studied public health and architectural history.”

Her family’s perception has changed since then, starting with when they watched a documentary about a famous pottery studio in San Francisco. When they attended an art show of their daughter’s, they were pleasantly surprised when people wanted to buy her work.

Getting over the hurdle of her parents’ initial reaction was difficult for Shah, but her journey and seeing others with similar journeys inspire her to keep going.

“I never thought that I would get this far and I’m very thankful that it has,” Shah said. “I still remember my first order from somebody I didn’t know: it was on Etsy, it was somebody in Michigan. She just found me and I was like: ‘OK, she wants a knitting bowl.’ And it was such an amazing feeling—somebody wanting your work.”

Now Shah is in shops across the U.S. She makes wholesale orders and showcases her work in shows. She recently moved her workspace into her own gleaming garage studio where she works for hours every day alongside her dog, Hanz, who’s usually on guard for visitors or chewing on a toy.