Long Beach police say they’ve arrested a driver on suspicion of vehicular manslaughter after he crashed into a 7-year-old boy who was crossing the street with his father.

The driver, who was in a 2005 Dodge Ram pickup truck, was turning left from 23rd Street onto southbound Lakewood Boulevard around 5:22 p.m. Tuesday when he failed to yield to the father and son, who were walking eastbound across Lakewood Boulevard, according to the Long Beach Police Department.

“The father and juvenile were in the crosswalk with the right-of-way pedestrian signal when the incident occurred,” police said. 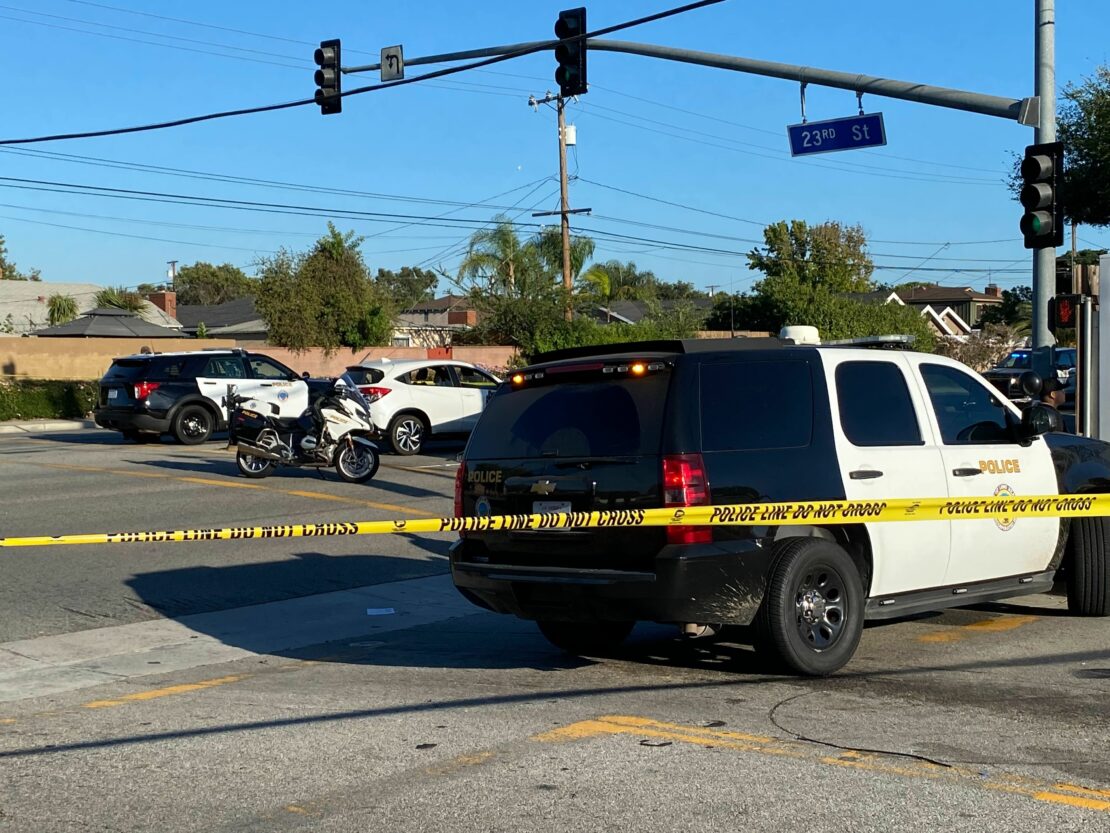 Police close off a portion of Lakewood Boulevard while investigating a fatal traffic collision Tuesday, July 26. Photo by Jason Ruiz.

The crash left the 7-year-old unconscious in the roadway, police said, and paramedics soon arrived and determined he was dead. Police did not report any injuries to the father. The Los Angeles County Coroner’s Office identified the boy as Gabriel Garate and said he lived in Long Beach.

The pickup truck’s driver remained at the scene and cooperated with the investigation, police said.

About five hours later, he was arrested on suspicion of felony vehicular manslaughter with gross negligence. He was held on $50,000 bail until posting bond shortly after midnight, jail records show.

Authorities identified the driver as James Barnes, a 57-year-old resident of Desert Hot Springs. When contacted by a reporter Wednesday morning, Barnes declined to comment for now, saying he needed to collect his thoughts.

Police said Barnes has a valid license, and investigators do not believe alcohol, drugs or distracted driving were factors in the crash.

The intersection is near Stearns Champions Park. Armelia Patterson, who works at a nearby daycare, said it’s common to see parents walking their children through the neighborhood.

Car accidents are also a familiar occurrence, according to Dominique Martinez, 25, who said she has lived on the corner of 23rd Street and Lakewood her whole life.

When the crash happened Tuesday evening, Martinez’s boyfriend was in the bathroom when he heard screaming coming from the street. The couple ran outside and saw police blocking off the intersection where a small body lay covered by a sheet. A man was sitting nearby, apparently in distress.

“He was so upset,” Martinez said.

The morning after the crash, neighbors began arriving to pay their respects at a makeshift memorial on the sidewalk.

One woman, who said she heard about the crash on social media, left balloons and flowers. Ryan Segovia, 18, placed a toy on the sidewalk in honor of the 7-year-old victim. Segovia didn’t know the boy but said he’d gone through something similar when a friend was killed in a crash near Los Coyotes Diagonal in September.

The LBPD has publicly reported 26 traffic collision deaths so far this year. Of the 26 deaths, half were pedestrians.