Long Beach officials will be reducing traffic lanes along Atlantic Avenue in the heart of the Bixby Knolls business corridor to reduce speeding traffic and to open up the street for outdoor dining.

Councilman Al Austin and members of the city’s Public Works Department hosted a presentation Thursday evening where details of the proposed lane reduction was discussed with the public.

Carl Hickman, a city traffic engineer, said the north and southbound lanes on Atlantic Avenue between Claiborne Drive and Roosevelt Road would be reduced to one lane. Local businesses would use the sidewalk and the closed lanes for outdoor seating and dining. Hickman said the project would be completed sometime in the next two weeks. The project is temporary but will remain in place until the end of the year, Hickman said. 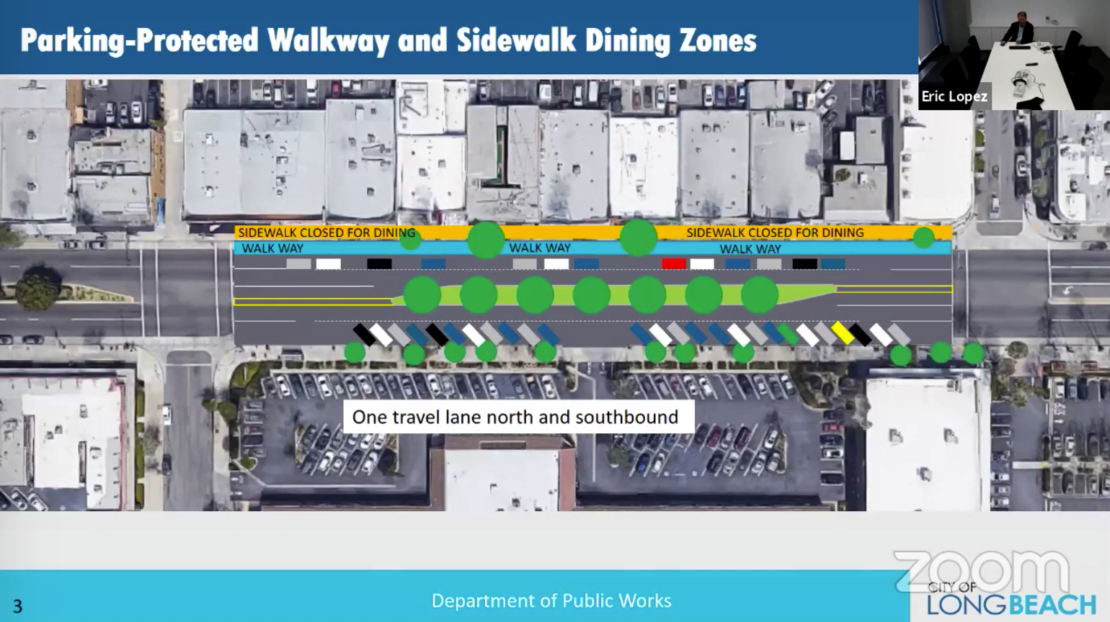 A screenshot of a proposed open street project on Atlantic Avenue in Bixby Knolls. Traffic would be reduced to one lane to allow for business to have outdoor seating and to attempt to reduce speeding traffic. 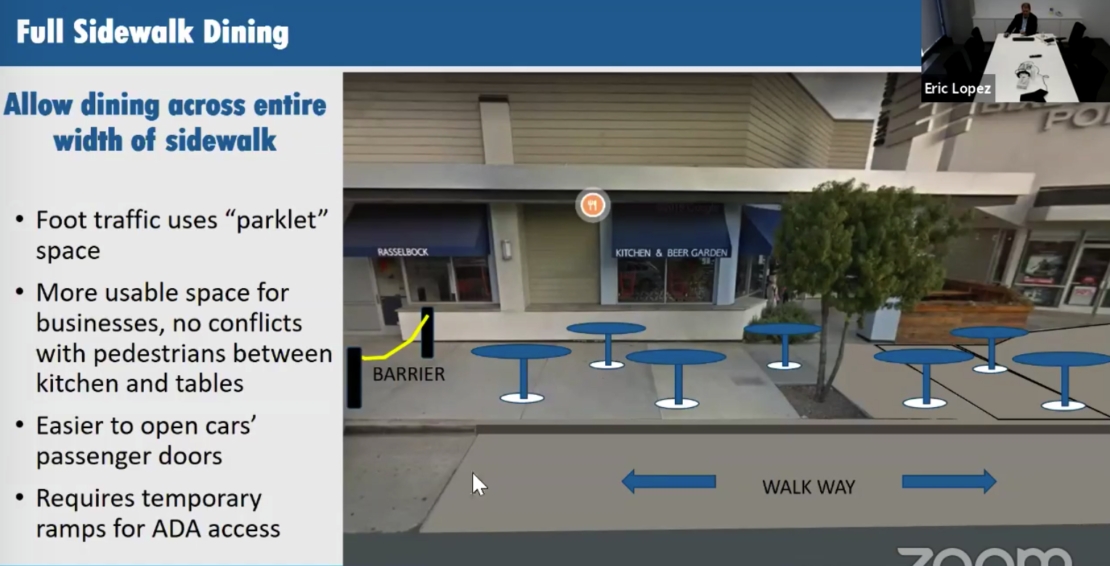 Proposed design of an outdoor dining area in Bixby Knolls as part of a open street project to reduce traffic lanes and allow businesses to operate outdoors.

Officials said the project would be considered a pilot, and could be changed if it doesn’t please residents.

Austin said the Atlantic Avenue project is part of the city’s “open streets initiative,” which the City Council passed this year to temporarily transform streets and sidewalks into outdoor dining areas such as the closure of Pine Avenue in Downtown.

The lane reduction not only allows businesses to function as the COVID-19 pandemic continues, but it also aims to solve a speeding issue that has local residents concerned for their safety.

Blair Cohn, executive director of the Bixby Knolls business district, works in his office that overlooks Atlantic Avenue. He said the street reminded him of a freeway.

“I almost got taken out crossing the street,” Cohn said.

Austin said that the local police office recently implemented a direct enforcement team to crack down on the speeding drivers and that officers issued dozens of citations.

“We’ve had a number of accidents recently on Atlantic, and this is a response,” Austin said. “Something had to be done—this is a fatality waiting to happen.”

Hickman said that protective barriers would be put in place to offer protection to pedestrians and outdoor dinners, but said that the true protection barrier would be parked cars between the lane that remains open and the closed down lane.

While no specific study has been conducted, Hickman believes the proposed lane reduction would force traffic to slow 5 to 7 miles per hour below the average speed limit.

This location in District 8 was selected because most businesses are located along Atlantic Avenue and because the lane reduction would not interfere with bus stops, according to officials.

Austin said that other locations are being looked at including the Virginia Village business corridor farther up into North Long Beach.