When developer Lloyd Whaley was building a big part of East Long Beach in the late 1940s through the early 1960s, he was aiming squarely at the middle-class: working class families with jobs building ships and airplanes or working in factories. The houses, at prices hovering around $8,000-$14,000, sold faster than the carpenters could drive nails.

Whaley had the idea of carving out a portion of the eastern part of town into a tonier, more exclusive enclave with streets lined by mature trees and residences. Unlike those in the surrounding communities of Los Altos that were tract homes churned out as if on a construction assembly line, these were custom built by both established and up-and-coming architects like Paul Tay, Richard Neutra, John Lautner, Ed Killingsworth and Kenneth S. Wing. They were mostly large homes set on parcels of 6,500 square feet—about 1,000 more square-footage than their cousins outside the upper-class tract.

It was called Park Estates, and Lloyd Whaley carved out a huge portion of the land for his own personal mansion on Bryant Drive, Park Estates’ own Rodeo Drive, named for Susanna Bixby Bryant, from whom Whaley purchased the land for the neighborhood. 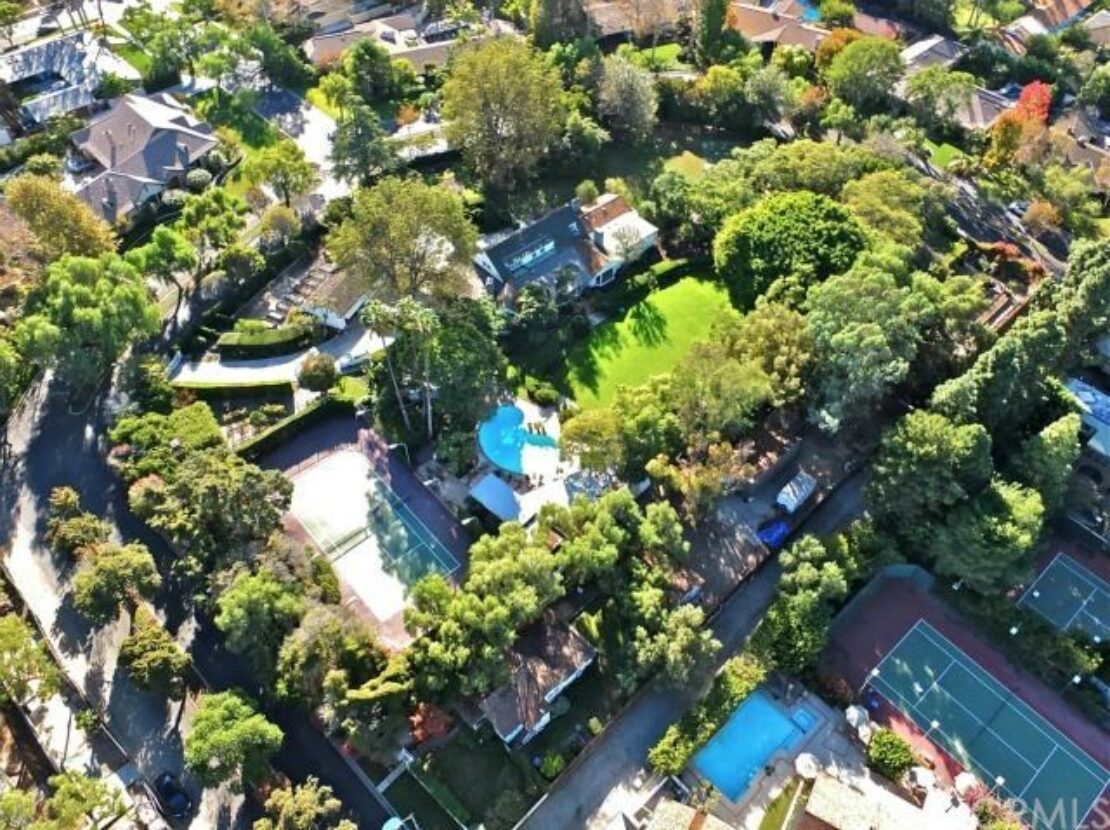 Whaley’s spread remains the largest single-family plot of land, at 2.5 acres, with a house that, whenever it’s sold, resets the record for the most expensive house purchased. Redfin’s latest estimate of the house’s worth is a bit over $7 million.

Unfortunately for those wishing to become king of the hill in Long Beach, the home isn’t current on the market, but there is a Park Estates home for sale now that is both architecturally and physically, in the neighborhood.

The 5,180 square-foot home on a bit more than a half-acre at 1460 El Mirador Ave., is within hollering distance of the old Whaley place in the up-scale Estates Section of Park Estates (where, incidentally, hollering is frowned upon). It’s listed by Realtor Jeremy Howard of EMBARQ at $3.695 million.

The home, designed by the Long Beach architects John Duffy and Leo Dreher, was built for John F. McGill and his wife Millie in 1961. Among Duffy & Dreher’s other work around the city were the old-London-style buildings in Mary’s Gate Village adjacent to the Queen Mary. Their work for McGill, a noted Long Beach physician and former chief of staff at St. Mary Medical Center, was decidedly more up-to-date at the time, giving the house a sprawling mid-modern ranch-style look, with four bedrooms and seven baths.

In the intervening year, the house, now owned by Gary Howard, who ran Long Beach Uniform on Long Beach Boulevard, has been kept up to date, most noticeably in the spectacular entertainer’s kitchen that’s equipped, of course, with top-line appliances, including a Miele coffee/cappuccino/espresso machine, a Gaggenau vegetable steamer and a squadron of not one, not even two, which would be excessive, but three Fisher & Paykel dishwashers. 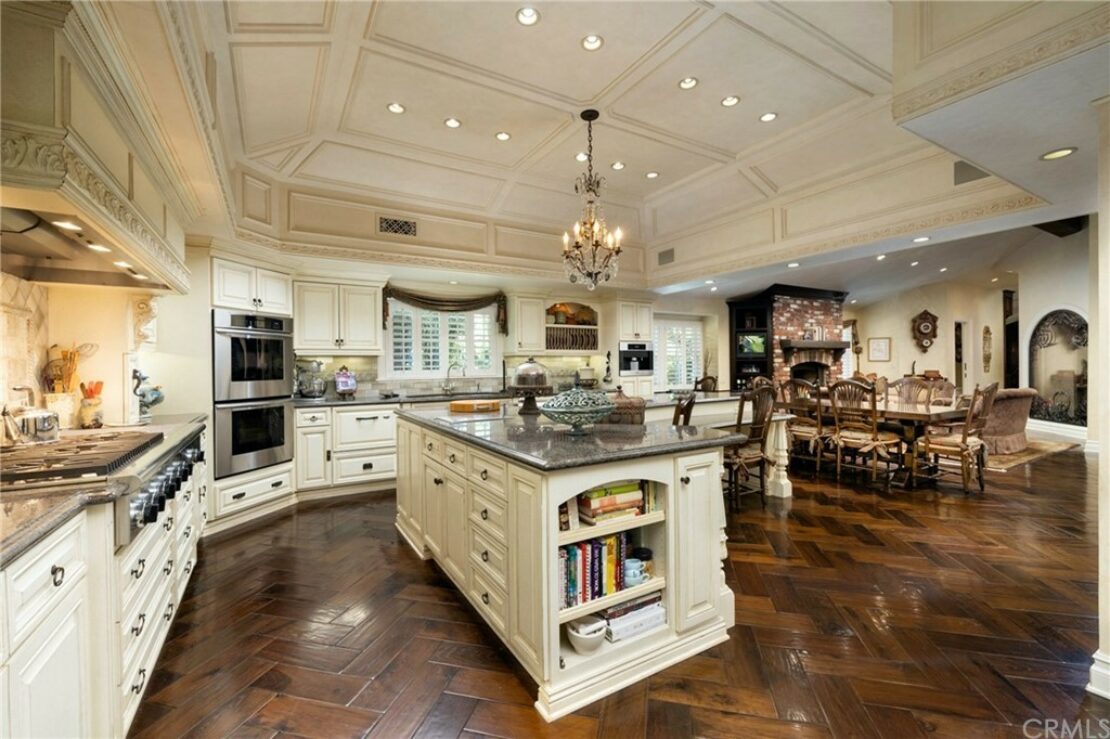 The well equipped kitchen opens up to an eating area for casual dining. Listing photo.

The master suite has its own “bonus room” and a bathroom with walk-in shower and steam room and a bathtub with a private garden view. To store your clothes, there’s a walk-in (large enough to be termed “drive-in”) closet, and then, back downstairs, there’s plenty of entertainment, including a pool table room and theater-quality big-screen TV and sound system.

If you like wine as much as you like dishwashers, off the den you may descend into an expansive wine cellar (with its own dedicated HVAC system, never mind its 900-bottle capacity) with repurposed brickwork and railroad trestle wood beams. 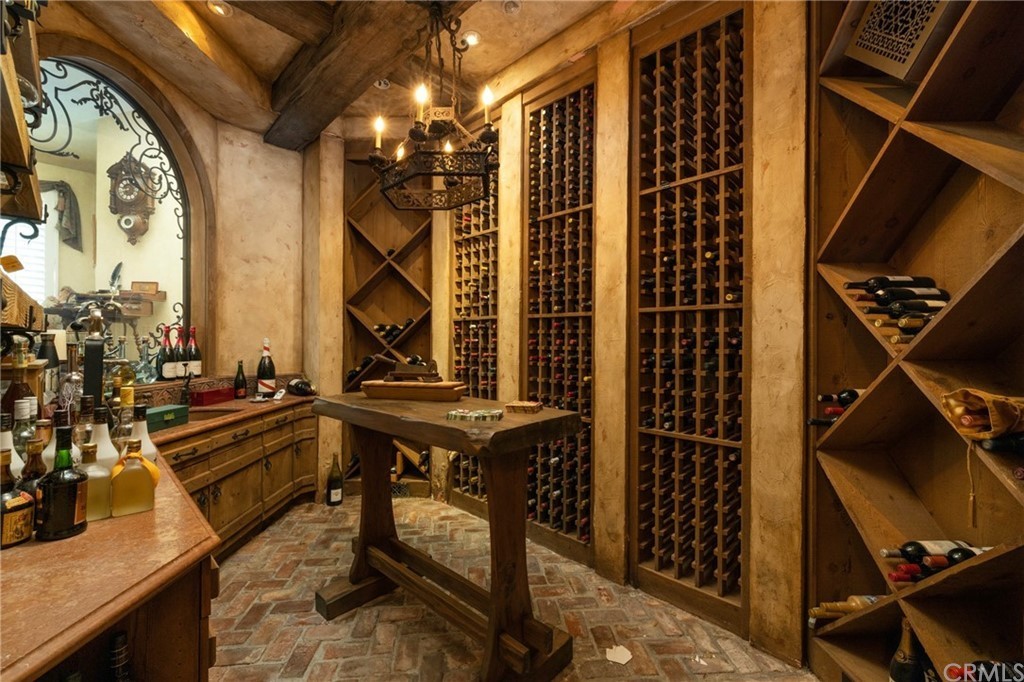 The more formal parts of the house—the living room and the dining room, are less playful and border on the opulent.

It’s a little of both in the huge backyard with a large pool and a 12-person hot tub set in a lush garden with mature plants and flowers as well as a separate bathroom with shower, and a detached guest house.