The Chateau Thierry neighborhood of Long Beach isn’t among the city’s 18 historical districts but it probably should be, considering its significant role in aviation history and the establishment of Long Beach Airport.

Long Beach’s true pioneer of aviation was Earl S. Daugherty, born in Iowa in 1887 before moving to Long Beach with his parents as a young teenager in 1902, the year the Wright brothers first took a short powered fight, and the young Daugherty’s dreams took off. Nine years later, in 1911, he became the first person in Long Beach, and the 87th in the nation, to receive a pilot’s license. From then until his death in a crash in 1928, he spent as little time as he could on the ground.

He and his father Charles bought and cleared some 20 acres acres to build a flying field west of Long Beach Boulevard and south of Willow Street and named it Chateau Thierry after the famous French battlefield in World War I. Daugherty gave flying lessons and offered private flights out of the field. Prior to the Chateau Thierry field, the beach was the only place you could land a plane in Long Beach.

In 1923, Daugherty convinced the city that a more proper airport was needed. The city agreed and on Dec. 20, 1924, the field was christened as Daugherty Field, or Long Beach Airport as it’s commonly known today.

The airport continued to grow over the decades. Its terminal, designed by noted Long Beach architects Kenneth S. Wing Sr., and Horace Austin in the Streamline Moderne style, was completed and set for grand opening on Dec. 7, 1941, the day Pearl Harbor was attacked. Instead, it was painted in camouflage and used as a billet for soldiers and military guns. The terminal formally opened on April 26, 1942.

Meanwhile, the old Chateau Thierry field and its surrounding acreage was developed, with lots initially pitched as an opportunity for speculators to strike it rich in oil, which had been found on Signal Hill in 1919.

Part of a full-page ad in the Long Beach Telegram in 1919.

It didn’t turn out to be a petro-bonanza for buyers in the Chateau Thierry tract, but the area did turn out to be a beautiful neighborhood, marked by fine, sturdy architecture in a variety of styles: traditional, English Tudor, Spanish Revival and Mediterranean Revival (the term “revival” in architecture basically just refers to a modern application of the style of an older architectural era).

Today, the Chateau Thierry neighborhood is defined as the area south of San Antonio Drive and north of Wardlow Road between Long Beach Boulevard and Atlantic Avenue—an area just west of the California Heights Historic District. Homes rarely come up for sale here not only because people tend to hold onto them for a long time, but they are in relatively short supply, with just two residential streets, Linden and Elm avenues, running from San Antonio and Wardlow.

Reflective of the fact that people aren’t generally anxious to leave the neighborhood is this house at 4350 Linden Ave., on the market for the first time in nearly 50 years as its owners are moving up the coast to be close to their children and grandchildren.

This house was designed in the traditional style by the nearby LGB terminal architect Kenneth Wing who has done so much more in designing the look of Long Beach, including the Long Beach Arena, the Terrace Theater, much of Cal State Long Beach, the Harriman Jones Clinic (now a Rite Aid) on Broadway and Cherry Avenue as well as a multitude of residences in Los Cerritos, Cal Heights, Naples and Park Estates—wherever fine homes are found.

Listed by Realtor Alan Fasnacht for $1.375 million, the house is in pristine condition and, while it’s turn-key, its decor, which some people will find elegant, is decades apart from contemporary. It gives me flashbacks of my grandparents’ Los Cerritos home in the 1970s. It could be a great project for you if removing wallpaper sparks joy in you. 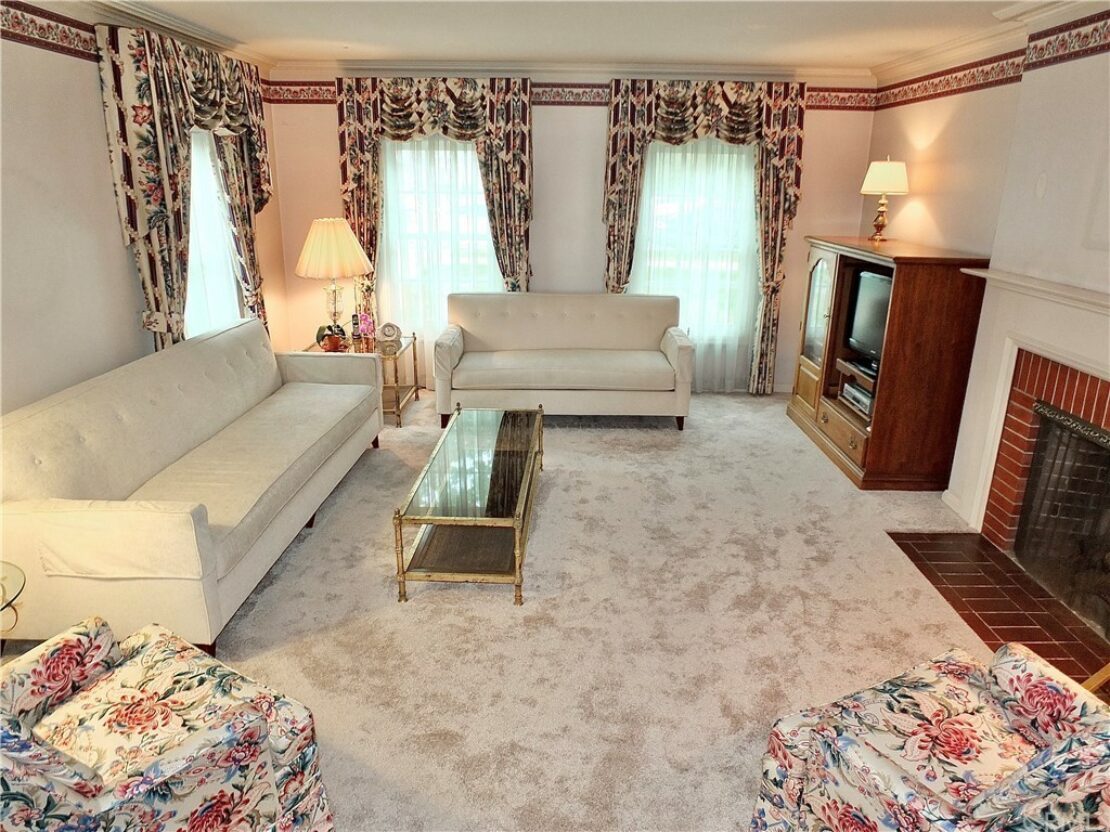 The use of tile for the kitchen countertops, while also old-school, is still a refreshing change from today’s ubiquitous use of quartz. I do like kitchens to remain fairly close to vintage in a 1939 home such as this one. Wing’s extensive use of oversize windows is amply evident in the kitchen, too, offering views of the nicely landscaped backyard and brightening up the room. 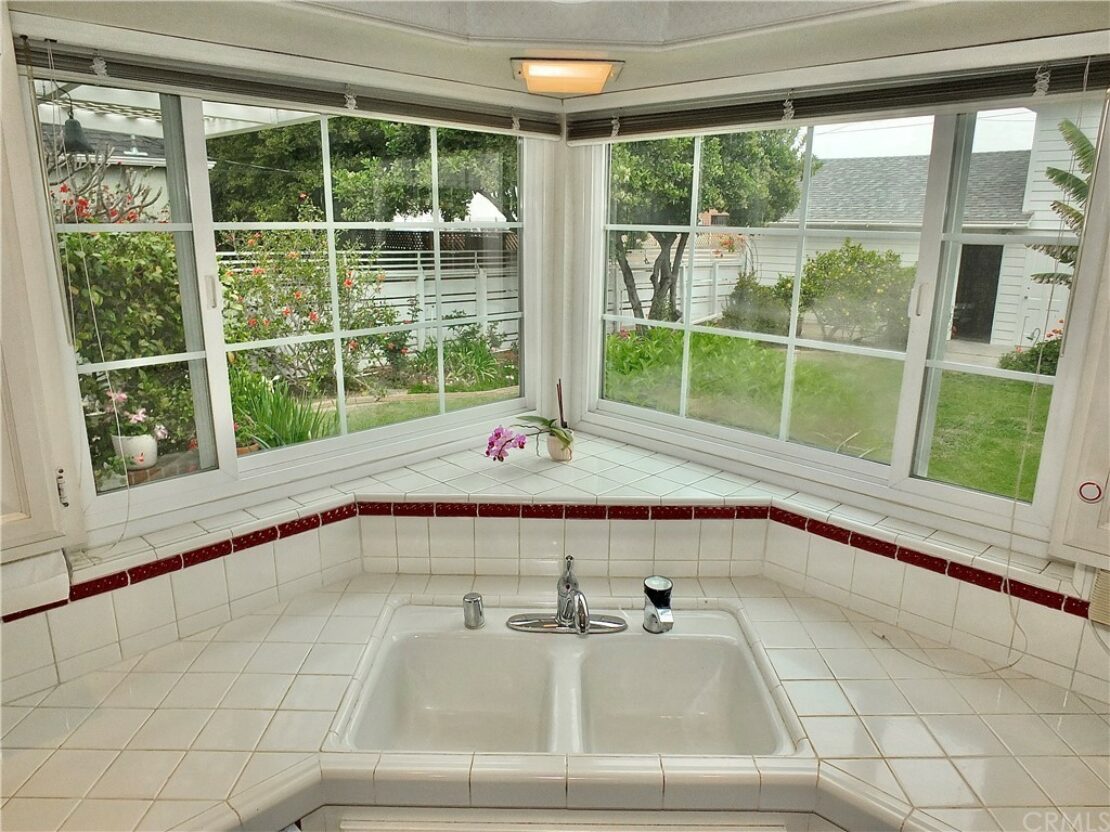 View of the backyard from the kitchen. Photo courtesy Alan Fasnacht.

The home has three bedrooms and two baths in 1,989 square feet of living space, but you get a lot more house than that, with 1,536 square feet of extra space not included in the official count. Wing was also the architect on a garage with a bonus room on top that was added in 1947. The three garage spaces include a 400 square-foot workshop and, above, a 570 square-foot bonus room where you can stow guests, holiday decorations or whatever else you want to use it for.

A more proper guest room, or even an extra bedroom (or, again, whatever) is the finished 566-square-foot attic that’s relentlessly and rustically paneled, walls, doors and ceiling, with knotty pine. 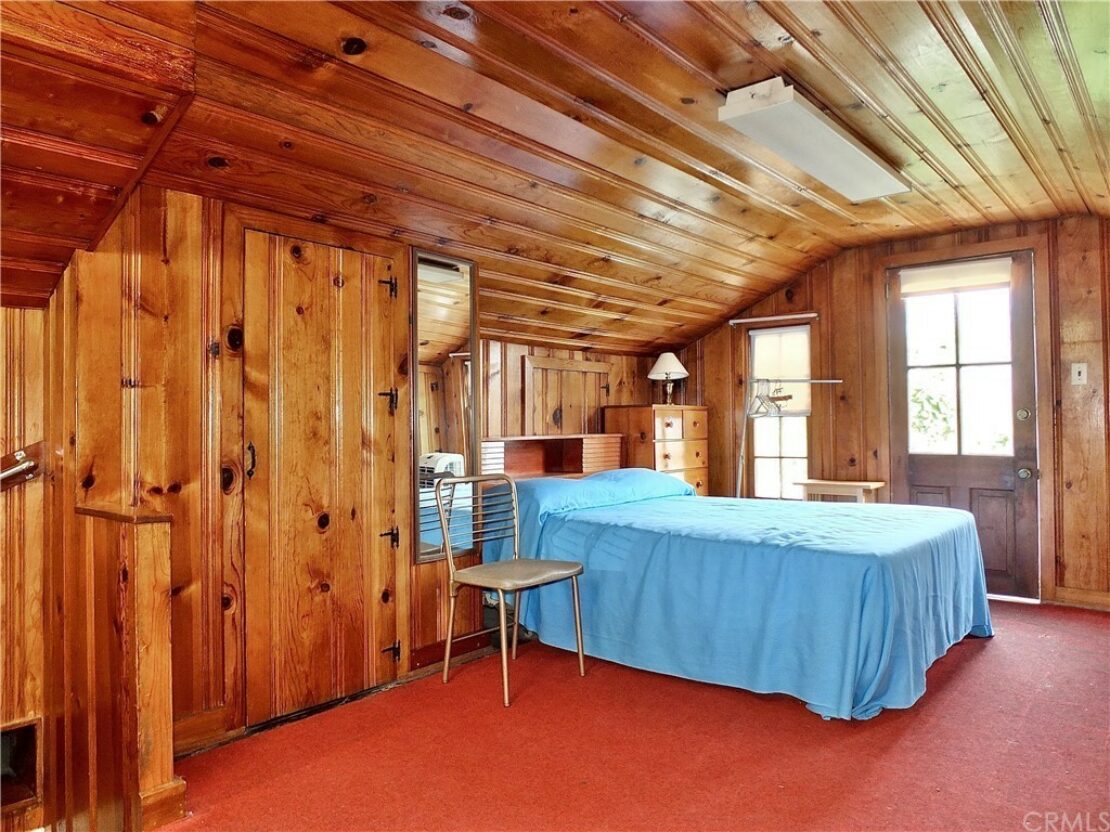 Local amenities abound within walking distance, including Steelcraft and all the dining and retail establishments on Atlantic Avenue in Bixby Knolls.

And, while streets in the neighborhood are generally quiet, you may hear the occasional jet taking off. That’s just the sound of history repeating itself. You could always hear airplanes in Chateau Thierry.