Are home prices tanking now? Nope, not yet. And as high as they are, I’m not even sure what a price tank would look like. Will the house you bought 30 years ago for $230,000 that’s now worth $1 million go back to $230,000? Or just backslide to $650,000? Or merely stop skyrocketing in price? And if/when the prices tank will you be able to finally get your foot in the home-ownership door, or will hedge fund companies snap up inventory as greedily as a pair of pet Pembroke Welsh corgis attacking the platter of pigs-in-a-blanket that you accidentally dropped on the rug?

As I’ve noted before, and as everyone already knows, “affordable” is a relative term—relative to how much money you have or can otherwise get.

People who have trouble coming up with a monthly rent of under $1,000 simply can’t be in the market for an “affordable” little $500,000 home, and, frankly, it will always seem strange to me to think of a half-million dollars as being a reasonable price for something that doesn’t rise to the level of American Dream for most dreamers.

All that being said, $500,000 meets the mark of “affordable” in Long Beach, where the median price for a home in this city these days is well over $700,000 by anyone’s estimations, with more desirable homes soaring over $800,000 and into the millions.

I don’t generally like to recommend condominiums or own-your-own properties, which can have deceptively inexpensive price tags, with only a glancing reference to unwieldy Homeowner Association fees that can be as high as $1,000 a month, to say nothing of having to grapple with miscellaneous and often bothersome terms and agreements. If you own your own house, you can put a giant stuffed panda on the porch, while your condo’s association might outlaw potted geraniums.

But, I found this sweet own-your-own apartment at 1311 E. First St. in Alamitos Beach that’s perfect for a single or a couple (an occupancy that’s pretty much true of everything under $500,000).

Listed by Realtor Dale Jervis at just $395,000, it comes with appliances and other trimmings that are practically worth as much as the list price: A kitchen crammed with above-state-of-the-art appliances, including an absolute killer Liebherr refrigerator, a Bosch dishwasher, a Miele stove top/oven/microwave, a Body Glove water filtration system and, yes, even more. 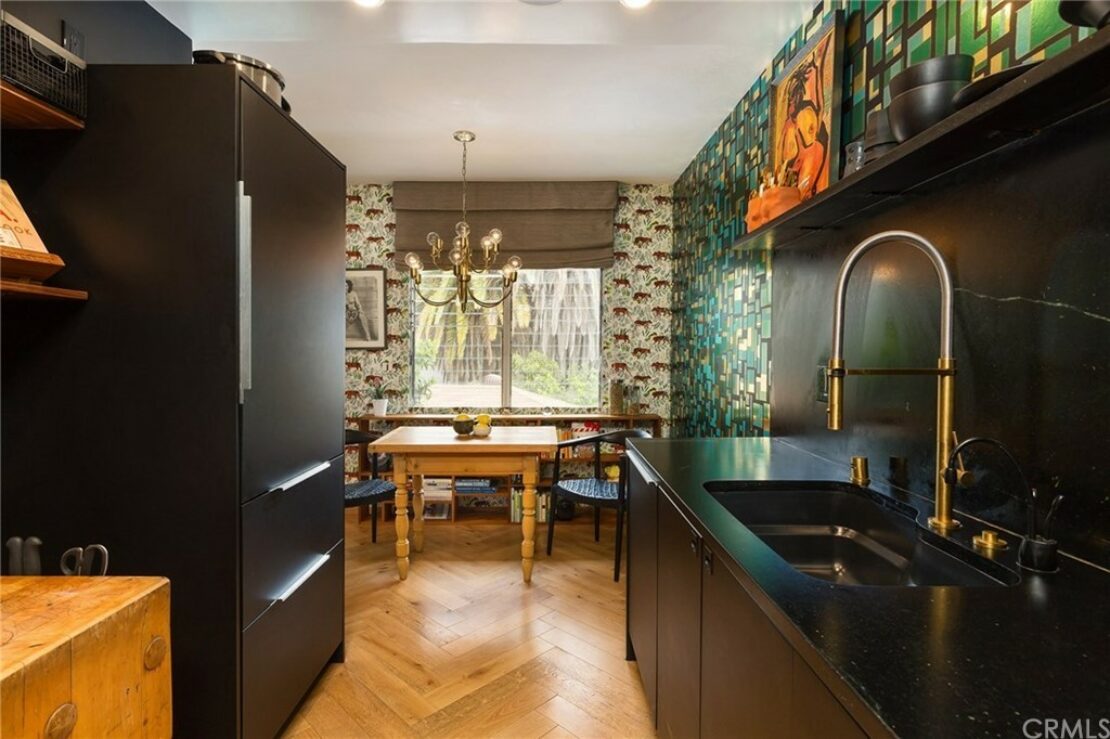 This monster Liebherr refrigerator is worth almost as much as the home on First Street. Listing photo.

The high-performance kitchen is the highlight of the home, unless you count the stunning professional decor throughout the house’s living room, bathroom and bedroom: chevron-pattern wood floors, eyeball-devouring wallpaper and high-class bathroom and lighting fixtures (the latter with Smart switches).

Let’s say I don’t have a wife, a son and daughter and a pair of dogs. In that case, I’m all over this. The HOA is a reasonable $180/month.

Realtor Nancy Deprez lists this next house, a 580 square-foot home at 1035 E. Chanda Court as being in Alamitos Beach, but it’s a tad north of that neighborhood, but happily, you’re instead in the Historic Hellman Street District, an area known for its high concentration of Craftsman bungalows although, alas, this isn’t one of them. Still, you’ll be in good architectural company (architecturally-significant-adjacent) with this cute little one-bed, one-bath house with its newly upgraded kitchen (after the own-your-own I just wrote about above, it’ll be a while before I’m unduly impressed by a kitchen again). 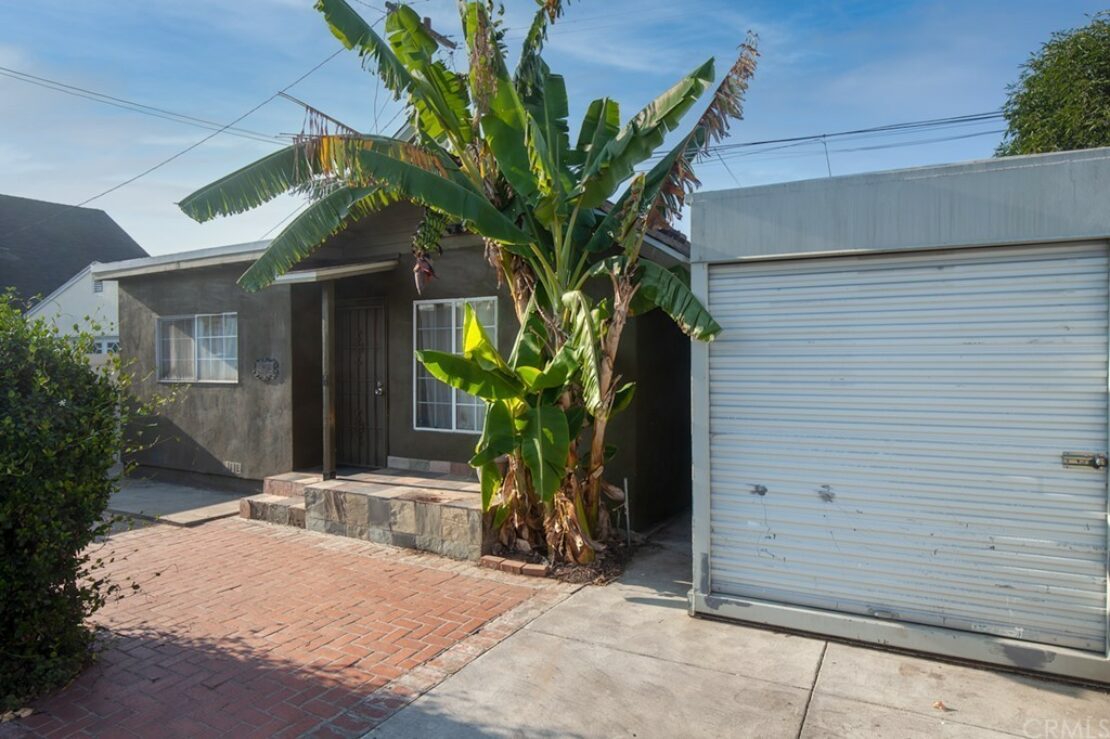 This Hellman Street Historic District home includes a shipping container that you can use for almost anything. Listing photo.

While the house, in this parking-impacted area, has no garage, it has a driveway that can accommodate a couple of cars. And, as a bonus, an “interesting” shipping container is next to the house, and its potential is limited only by your imagination: Convert it into a gym, an office, a garage for your bikes or motorcycles or just fill it up with junk like most people do with a garage.

Finally, a rare two-bedroom (at this price) at 2324 E. 14th St., sneaks into the under-half-million category thanks to a recent $10,000 price cut, putting it at $499,900. Listed by Realtor Carlos Tovar, the 568 square-foot Spanish-inspired home, wrapped in a Ranchos-inspired horizontal-plank fence to afford great privacy on the patio and front yard was built in 1923, but this home in the up-and-coming Zaferia neighborhood has been rejuvenated to the point where it’s a brand new home. 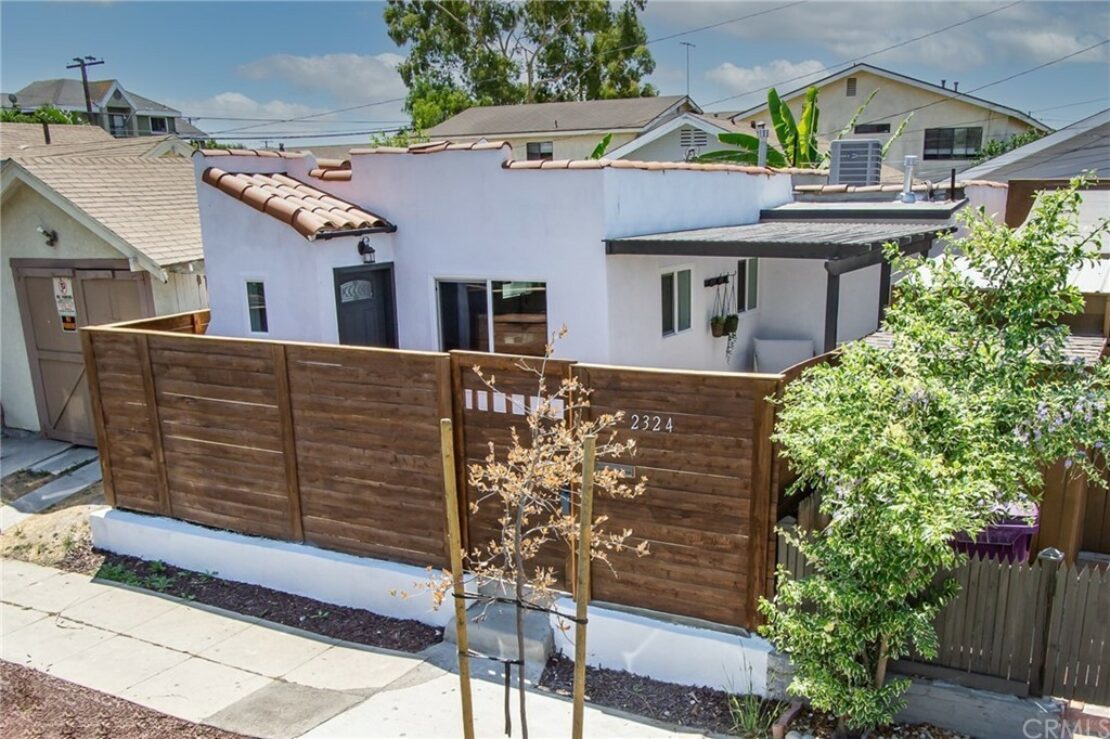 A horizontal-plank fence brings privacy to this home in the Zaferia neighborhood. Listing photo.

The perfectly serviceable spacious kitchen has new quartz counters, a new sink, a new faucet, new stainless steel appliances, new cabinets. The home has new double-pane windows and new HVAC. Outside you’ll find a new garden with drip irrigation and the new fence. Practically the only thing old about the house is its architecture, a sort of half-hearted stab at Spanish Revival.

It’s bright and airy inside with an open floor plan that manages to belie its meager square footage, and with two bedrooms, it can manage a family of three or, possibly, four if they can all get along.

All three houses are priced well below the median, which is a plus. One is in a location fairly close to the beach; one is in an emerging neighborhood and one is in a historic district. And, yes, a half-million dollars is still a lot of money.