Ghada Morad’s brother was shot and killed by a Long Beach police officer in 2015 while struggling with him during a medical emergency. Corie Taft’s father was killed by an unknown suspect in a Long Beach park in 2018, and she’s waiting for detectives to solve the case.

On Tuesday morning, both these women shared their loved ones’ stories outside City Hall as examples they believe show the Long Beach Police Department deserves to be defunded.

They made their pitch as part of the 3rd annual People’s Budget proposal, a statement of values compiled by local activist groups that serves as a counterpoint to the city’s budget.

Activists say Morad and Taft’s stories drive home a point that the local chapter of the Black Lives Matter and allied organizations pushed during the weeks of recent protests: Long Beach needs to divest from the police department and invest in community resources. 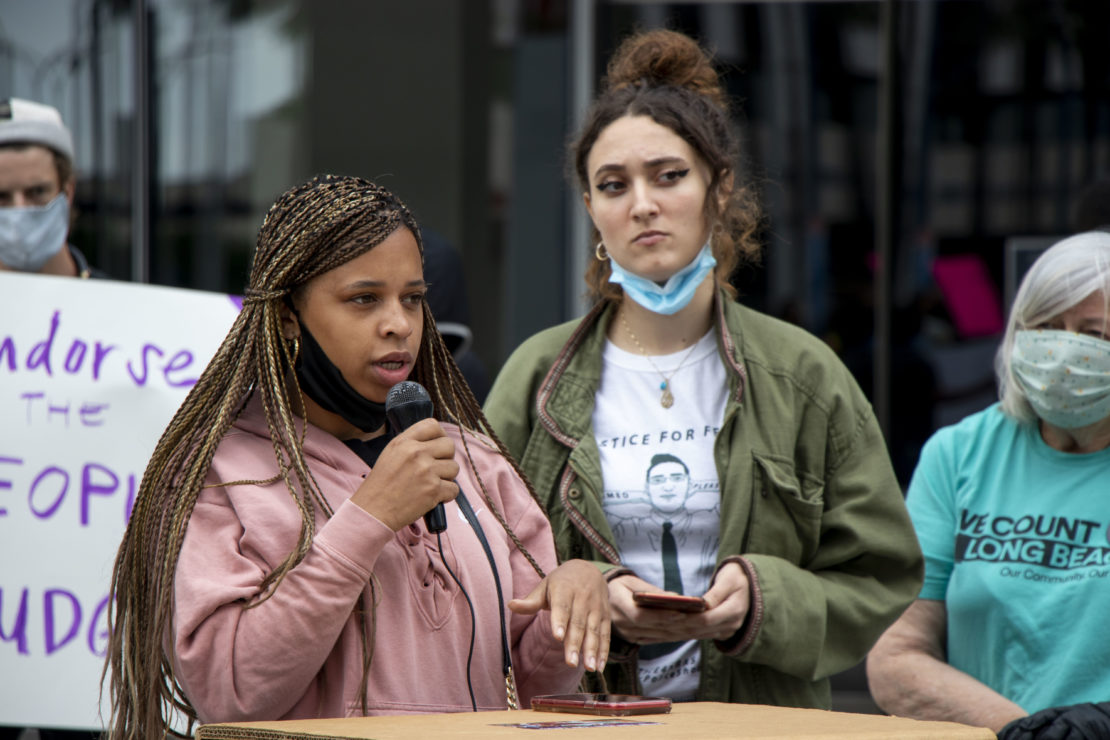 Corie Taft, left, and Ghada Morad, right, share stories about the deaths of their family members during a press conference for the People’s Budget Proposal outside the Long Beach City Hall on June 16, 2020. Photo by Crystal Niebla.

“We should be more focused on investing in community care,” said Morad. “Why is a cop at the scene when someone is in a mental health crisis? Why can they handle a school shooter so delicately but murder unarmed helpless civilians? Why did cops give Dylann Roof a Burger King meal after shooting up a church in Charleston but my unarmed brother gets shot five times?”

A jury ruled the officer who killed Feras Morad, a Cal State Long Beach student, didn’t use excessive force. The officer argued Feras Morad attacked him and wouldn’t obey his orders, but Morad’s family is appealing that verdict, arguing the jury was improperly exposed to damaging evidence.

For Fred Taft’s part, his family and local activists have been critical of the police’s response and handling of Taft’s case, which the family believes was a hate crime—although police say there’s no evidence of that.

Despite a $30,000 reward for information leading to the suspect, police haven’t made an arrest, even with a $250 million budget at their disposal, said Dawn Modkins, an organizer with Black Lives Matter LBC.

At Tuesday’s news conference, Modkins highlighted the organization’s list of demands from the city to improve Black communities.

In terms of education, the group called in part for an end to the police department’s contract with the Long Beach Unified School District, an investment in culturally competent counselors and the creation of ethnic studies.

The group also demanded a strengthened Citizen’s Police Complaint Commission that uses its subpoena power to call officers to testify. A current commissioner recently called the body a “farce” with little power.

Allied organizations also revealed their own list of demands, ranging from a continued investment in legal representation for undocumented residents detained in immigration centers to adequate funding for interpretation and translations services and the creation of a Housing Bureau that can adequately enforce renter protection laws. Renters make up about 60% of the city’s population.

“The city’s budget is a moral document that reflects our city’s values and priorities,” said Mac Harris, a youth ambassador with the Invest in Youth Campaign who emceed the event. “Adopting the people’s budget is more than just a shift in the way the city has done business, it is a pathway to ending anti-Blackness and structural racism in the city. Undoing historic disenvestment that has continued for generations and moving us closer to a Long Beach that is safe and healthy for all.”

The city’s 2021 budget is expected to be presented to the council in the coming weeks.