Meet Tex, who just a couple of weeks ago was a whisker away from death. 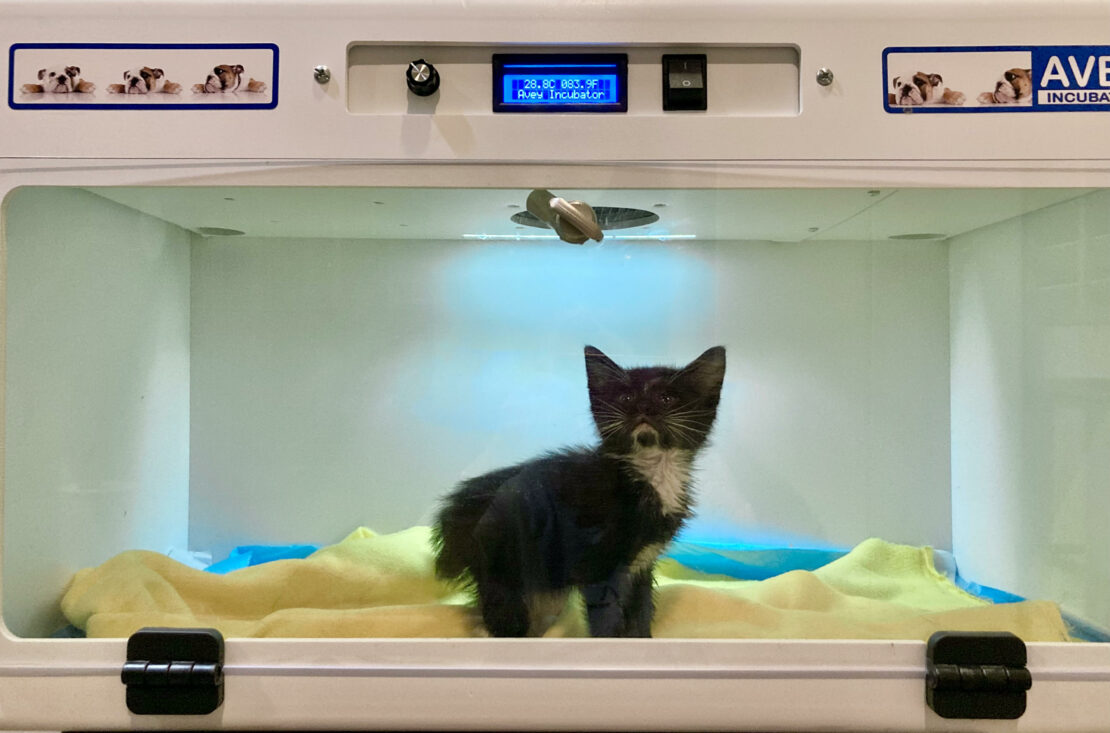 Tex was pulled from a shelter, clinging to life. Here, he receives therapy in an incubator. Photo courtesy of Helen Sanders CatPAWS

“We picked up this very sick little boy who was declining in the shelter and wasn’t going to make it,” said Helen Sanders CatPAWS founder Deborah Felin-Magaldi. “He had a lot going against him—severely dehydrated, emaciated, underweight, hypothermic. He had no name at the shelter, only a number. I thought he needed a rootin’-tootin’ cowboy name.”

Tex also needed extreme lifesaving tactics, and right away. As soon as they got home, Felin-Magaldi warmed him with a blow-dryer and swabbed Karo syrup on his gums to revive him. For the first day and a half, Tex couldn’t produce waste and had to be syringe-fed every few hours. He finally started to eat on own and began to act like a playful kitten.

“Then, the virulent diarrhea hit,” Felin-Magaldi said. “He lost weight despite syringe feeding, fluids several times a day. It was a race between the several medications he was on kicking in before his body gave out.”

At one point, Felin-Magaldi took Tex on an outing in plein air, with plain love.

“I thought he was going to die, he was listless and weak,” she said. “I carried him to the beach so he could feel the sea air and warmth of the sun on his face, listen to the seagulls before he left.”

Tex hovered between recovery and relapse, while Felin-Magaldi followed a similar trajectory, from resignation to elation. As of this writing, Tex looks as if he’s going to make it to the adoption center.

“He’s putting on weight again, even playing a little,” Felin-Magaldi said. “It’s not yet time to pop the sparkling cider, but I am more hopeful.” Video courtesy of Helen Sanders CatPAWS

Efforts like this one are what you don’t see when you take home a healthy, playful kitten from CatPAWS and other rescues. Tex, as you can imagine, isn’t Felin-Magaldi’s first rodeo, nor is she the only roughrider on the ranch. The kittens that CatPAWS gets from shelters aren’t the healthy ones—Felin-Magaldi said that they’ll get adopted reasonably fast wherever they are. It’s the sick ones, the ones with conditions that need surgery, and the ones who are hanging on to life by one paw that need to be pulled from the brink.

The fosters who volunteer for CatPAWS heck-bent on pulling every sick or injured kitten over the brink to life, and it’s always a 24-hour commitment.

“From the moment they come into my care, it’s nonstop support,” said Bev Vale, one of CatPAWS’ medical fosters. “After an initial assessment. I weigh them and record that, get their temperature and, if low, start to slowly warm them up. If they’ve had a chance to be with their mom, it can be a bit more challenging to get them to take the nipple. If I’m unable to get them to latch on, I’ll just tube-feed them.”

Vaccination schedules are set according to veterinary protocol at 4 weeks old, if the kitten is strong enough to handle them. Kittens with diarrhea are constantly hydrated with subcutaneous fluids. Vale is always on the alert for problems and signals such as movements and noises, which she says most people wouldn’t notice.

“The ones that show signs of trouble are supported with everything I have in our arsenal to throw at them, be that putting them in a temperature-controlled incubator with oxygen or in a chamber with a nebulizer,” Vale said. “When the parasites rear their ugly heads, I’m ready with the meds and the task of keeping their little rear ends from getting burned from the diarrhea that runs out uncontrollably. When one proves to be a fighter and against all odds comes out of it a champ, that is the most rewarding and heartwarming experience one could have.” 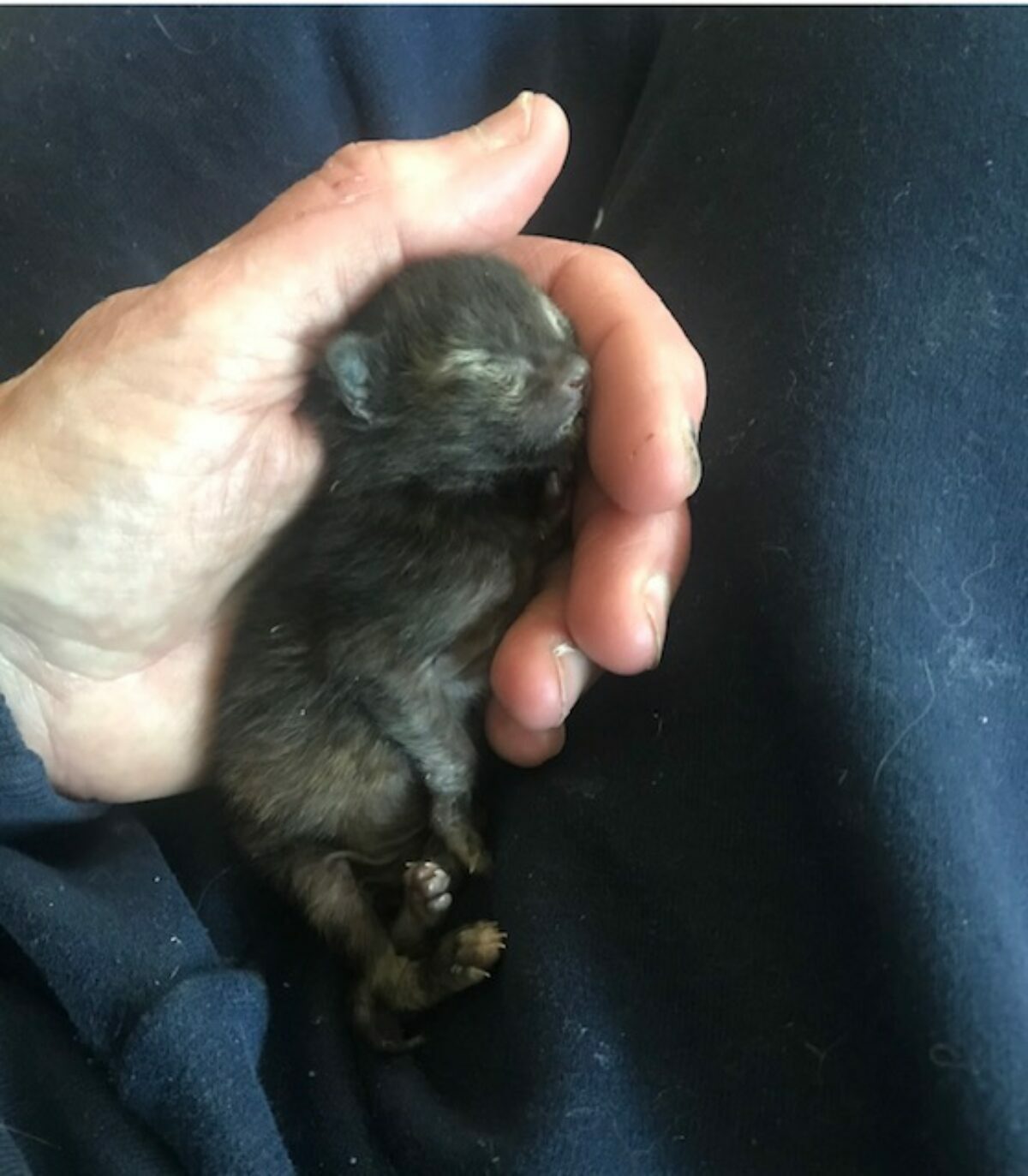 Here’s 10-day-old Gracie, whom Bev Vale helped to heal. This is what they mean by holding someone’s life in your hands.

Sometimes, despite all efforts, the foster has to let go.

“One particular kitten I had was a tiny little preemie—he still had his umbilical cord,” medical foster Jennifer Coy said. “When he was brought to me, he was nice and warm and cozy in a fuzzy blanket. But underneath that blanket, his back legs were purple—he had been left in the cold for too long by the time he was found. He was a fighter, though. He was a good eater, and he literally fought right till the end. He had just finished nursing from the bottle and fell asleep in my hands with his front paws wrapped around my thumb like he was holding on to the trunk of a tree. He was still holding tight when he took his last breath. My heart broke into a million pieces.”

Coy said that she holds and comforts kittens when it’s obvious that they aren’t going to make it.

“I want to be sure that when they cross over, they feel my hands cradling them and that they know they are loved,” Coy said. “I don’t ever want them to be alone when they take their last breath.”

Vale said that the constant care that the sick kittens need is wearing after so many sleepless nights and the constant laundry, but the rewards of seeing them turn the corner are what makes the fosters soldier on. But she’s frustrated at seeing the number of kittens born during kitten season, which is still going on despite the efforts to trap and fix ferals and offering spay/neuter discounts to cat owners.

“Every kitten that I see born into this world that ends up dying, I want to scream at the person who somewhere down the chain caused this to happen by not getting their cat fixed,” Vale said. “I hear excuses like they thought it would be cute for their cat to have a litter but then they give the babies away to others without having them fixed, before they know it, that kitten is now pregnant and the cycle starts all over again. I know that our rescue’s efforts along with all the others that are out there trying to make a dent in the kitten population are making a difference, but there are still thousands that are euthanized every year.”

Victories over pain and death, though, are enough to keep any compassioned, impassioned rescuer to continue to throw themselves into saving little lives like Tex’s. Tex is now eating, playing, and nibbling on visitors’ toes. With the combination of care, luck and love he has, he’ll be lassoing your heart at the adoption center in no time.

“If you’re adopting a cat or a kitten from CatPaws, you know without a doubt that you are adopting one that has had nothing but pure love poured into them,” Coy said. Here are a few cats whose stories won’t be complete until they go home. Visit the cat adoption center at the Seal Beach PetSmart, 12341 Seal Beach Blvd., Seal Beach, and check out all of them here. Adoption applications are available on the same link. To help CatPAWS continue to save lives, donate to one of these efforts. If you want to be a team member, inquire on the website about volunteering. Consider fostering as well.

And when you do visit, or adopt, be sure you pass on your thanks to the fosters who gave life to the silly little creature you fell in love with. 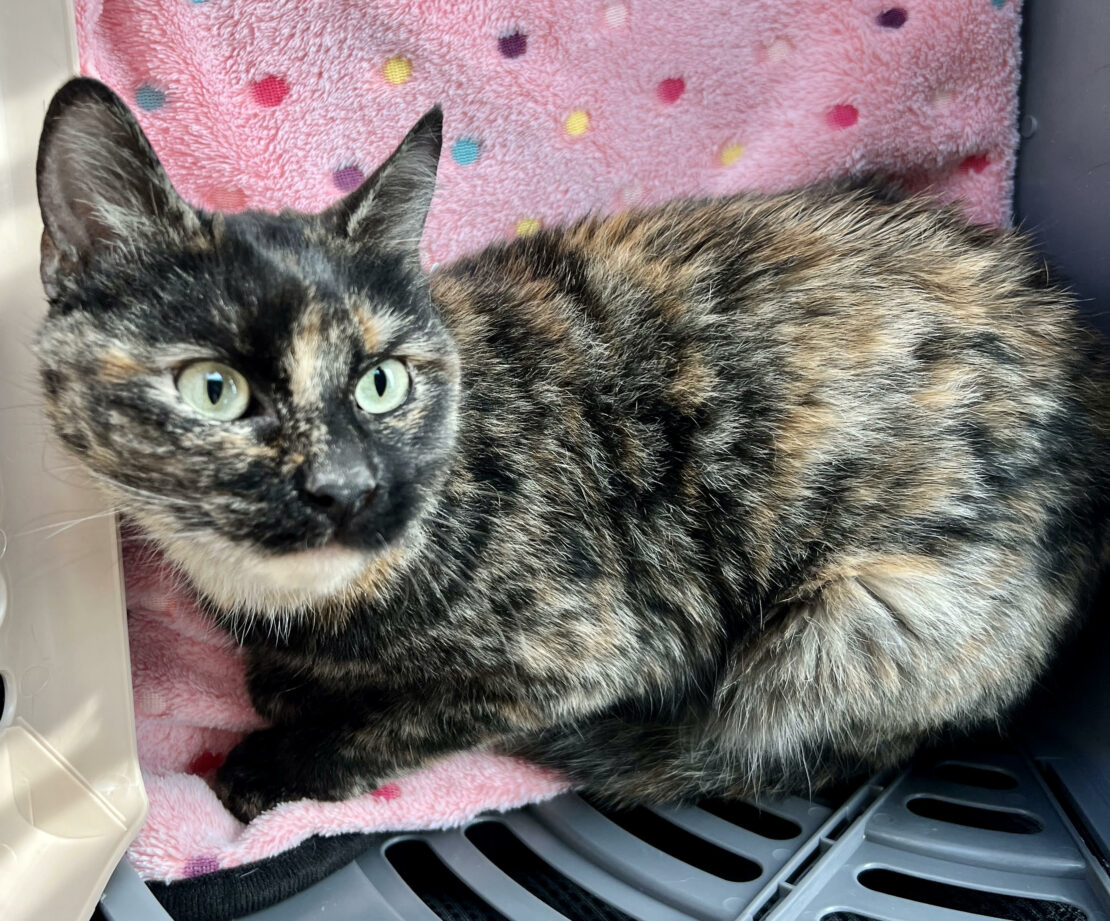 Meet Pebbles the Wobbly Cat! Pebbles has fortunately not experienced a severe health incident, but she does have a very mild case of cerebellar hypoplasia, a nonprogressive, non-life-threatening condition that she was born with and that affects her balance. She can use a litter box just fine and even chases the notorious red dot, albeit falling over a little occasionally while running! 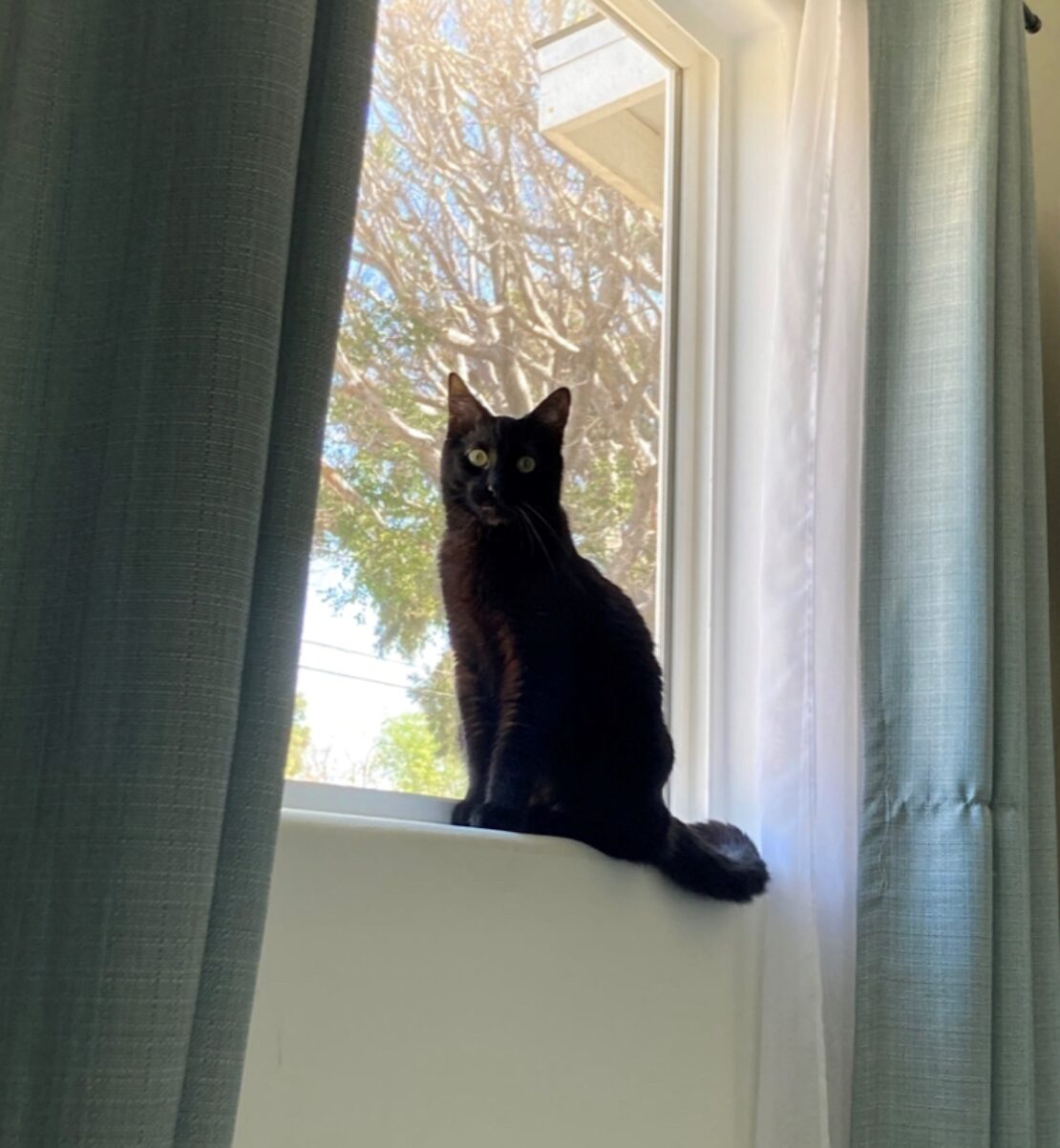 One of the fosters found Monday at work, likely on a Monday. He’s a glossy fellow and is very adaptable—and adoptable. He loves playing as well as dogs and other cats. He’s been quite snuggly in his foster home. 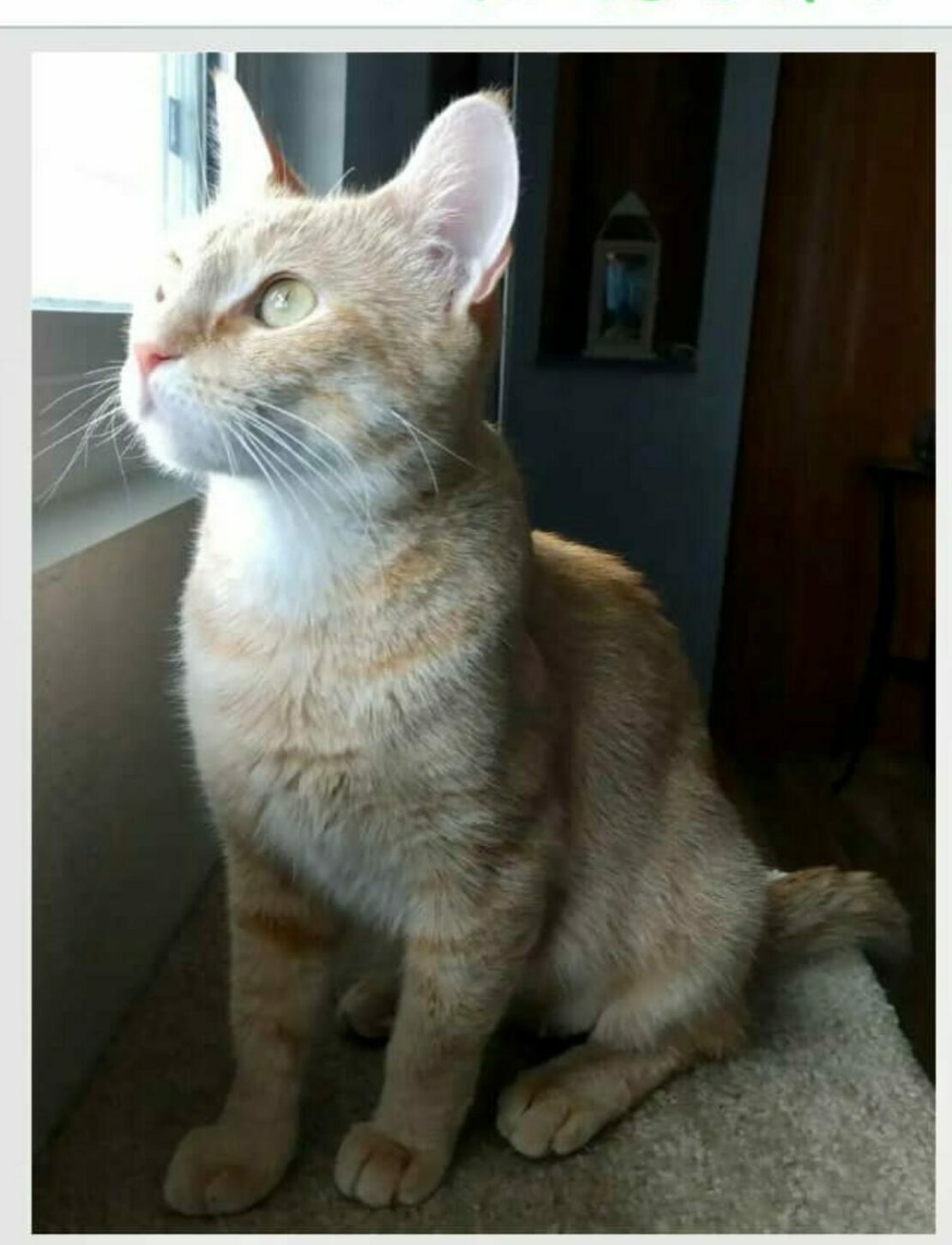 Mimosa is one of those cats who is so smart and full of personality. She is confident and funny and just a little sassy! Truly a beautiful cat—kind of a strawberry blonde! 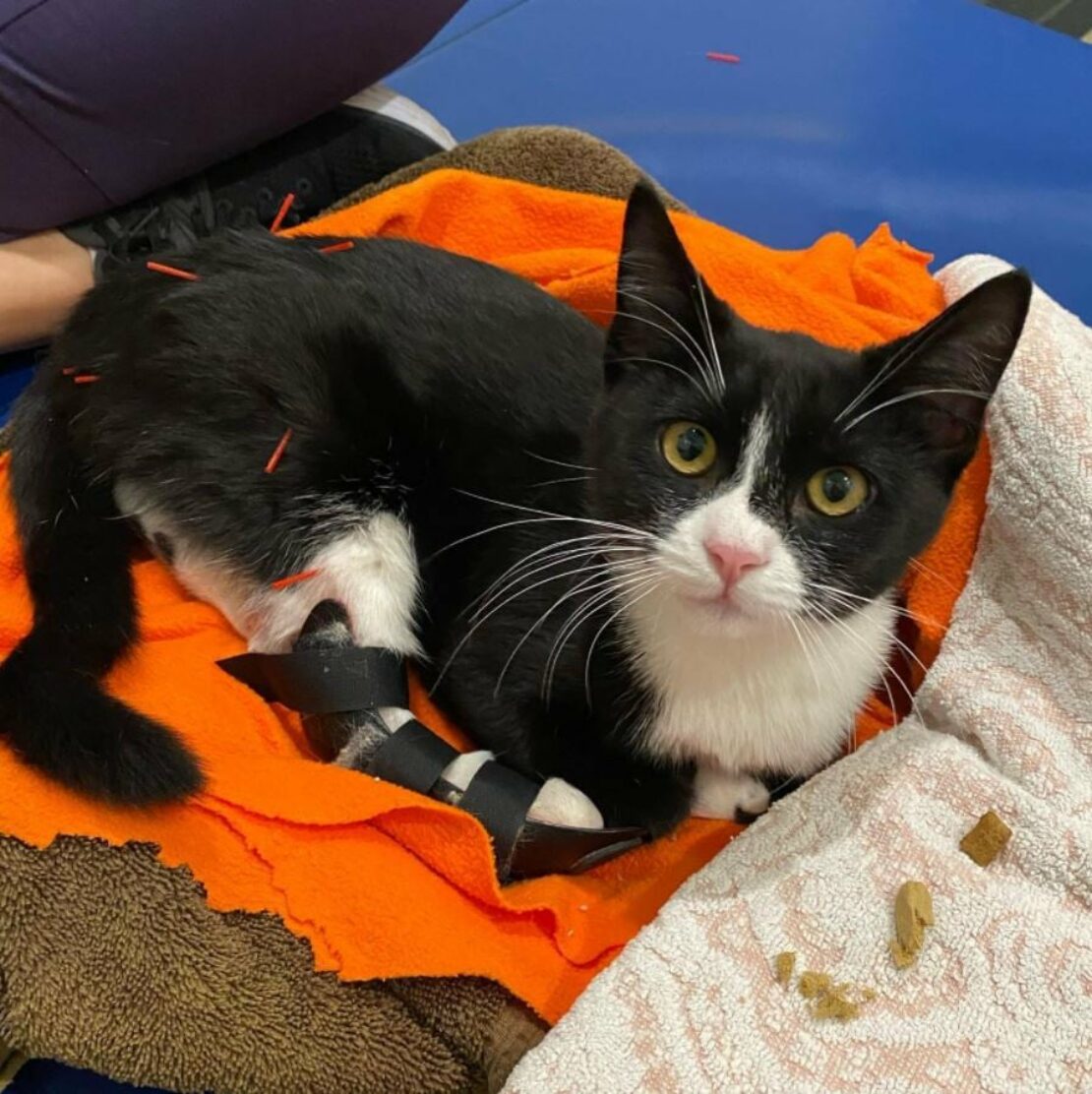 Like so many animal welfare organizations, after the passing of the iconic Betty White, CatPAWS named one of its newly rescued cats in her honor. This Betty White came into a public shelter with extensive injuries, possibly hit by a car. When she arrived, she  had nerve damage in her foot, which dragged on the floor. Under veterinary advice, the rescue started her on a physical-rehab regimen to strengthen her foot and regain function. She has been so good through it all! The technicians at the veterinary physical therapy place just love her! This special girl will be a delight to her adopter. 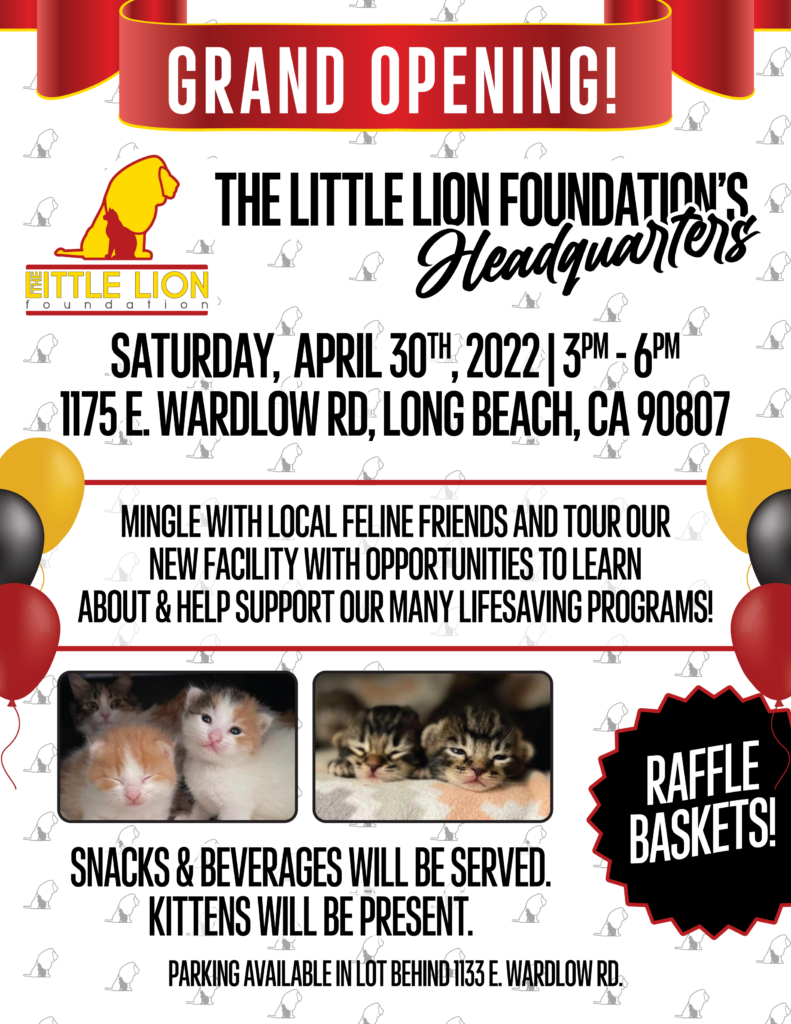 Want a fun way to cool off? Come down to Sparky on a Saturday or any day you don’t work and help Sparky and the Gang bathe their doggies! This’ll be good for the dogs, since they’ll get attention from you, and good for you because you’ll be as damp as the doggies. As hot weather hits, that’s a plus! Email [email protected] for details. 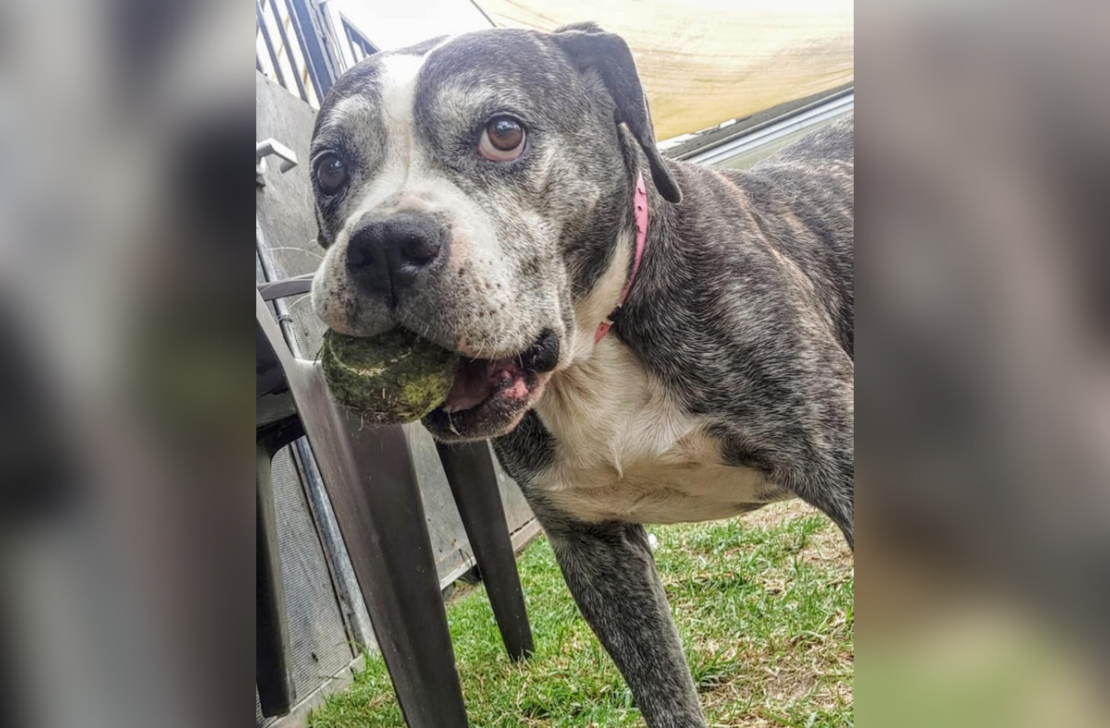 Please make our shelter at Long Beach Animal Care Service your first stop for adoption—it continues to fill with dogs and cats. LBACS is now open without any appointment necessary on Sundays from 11 a.m. to 3 p.m. for adoptions and for intake of healthy stray dogs. . If you can’t come Sundays, appointments to adopt one of these sweet animals are readily available at [email protected] or 562-570-4925. 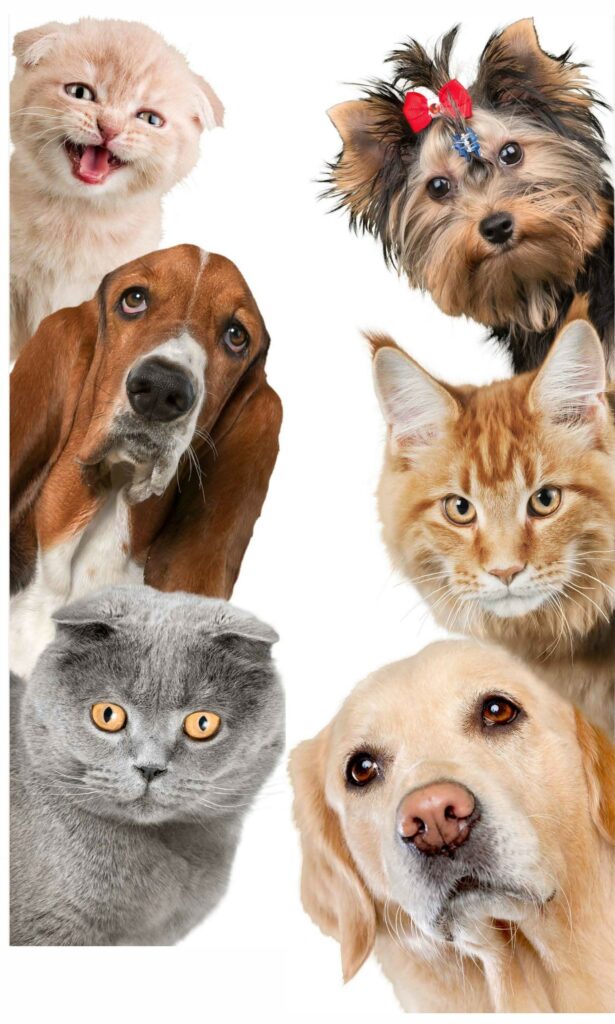 May we couch-surf at your place?

“I wish more people would try a shot at fostering, but what I hear many times from them is that they are too afraid to do it because they don’t think they could give up the kittens after having fostered them and gotten close to them,” Helen Sanders CatPAWS foster Bev Vale said. “I tell them that the goal is to get them into homes—it’s an extremely rewarding experience.”