Long Beach could start the process of creating a cultural district celebrating the contributions of its LGBTQ community, which has historically been centered around the Broadway Corridor and the neighborhoods north of Alamitos Beach.

Broadway has an undeniable LGBTQ presence, with rainbow crosswalks and Pride flags flapping in the wind outside of LGBTQ-owned businesses. It has served as a safe space for LGBTQ residents and visitors for decades, as well as a place to organize politically, and now the city could officially recognize it.

The proposal comes from Mayor Robert Garcia, the city’s first openly gay mayor, who is leaving office in December and is likely to be elected to Congress in November. Garcia said it’s important that the broader community and the city recognize that Broadway has been the heart of the gay community.

“Clearly identifying the Broadway Corridor as a space that has a significance to the community,” Garcia said. “Everyone knows it as the heart of the LGBTQ community but if there’s a way to make sure that history is preserved, that’s what we’re trying to do.”

Garcia is asking for a community process to develop a vision for the cultural district that could include historic markers and other efforts to honor activists and support local businesses by attracting visitors. The area of the district is broadly defined as the area between Junipero and Alamitos avenues and the surrounding neighborhoods.

The last cultural district designated by the city was Cambodia Town in Central Long Beach in 2007.

Cameron Kude, co-owner, and operator of the pop-up coffee cart Cafablanca, said it would be a good way to showcase the city’s queer history and help to establish it like a West Hollywood or San Francisco, which has multiple cultural districts dedicated to the LGBTQ community.

The corridor is important to the community because it’s home to many LGTBQ-owned and operated businesses. Kude pointed to Hot Java on the corner of Junipero Avenue and Broadway and said having a gay coffee shop to go to as a younger person helped shape his own queerness and helped push him into the coffee industry.

“Having a gay coffee shop was so fundamentally important for me,” Kude said. “It just made me feel safe.”

Kude’s partner, Juan Fernandez, said that if a cultural district is established it might be a good idea to have a museum of sorts to anchor the history of the LGBTQ community. Fernandez even had a site in mind: the vacant Paramount dry cleaners building, which he said has lots of natural light and would be a good spot to showcase those contributions. 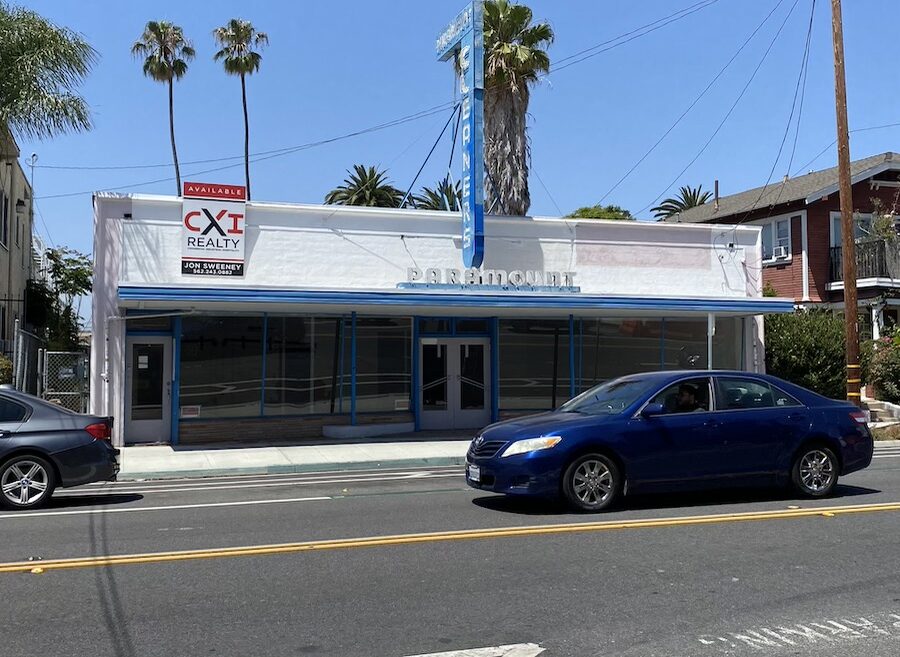 The vacant Paramount dry cleaners location where Juan Fernandez said a museum could go if a LGBTQ cultural district is established. Photo by Jason Ruiz

Sitting inside the Mineshaft, Michael Bott recalled when he used to work as a bartender on the corridor at Lil Lucy’s in the 1970s and 1980s. Lucy’s has since been converted into a doughnut shop and Bott has moved to San Pedro, but he still comes back to be with his friends in the familiar and safe confines of the many gay bars that dot Broadway.

Bott said he supports the idea of the district and would like to see the annual Pride parade come back to Broadway.

Nils Peterson questioned the timing of the proposal. Two or three decades ago it would have made more sense when more LGBTQ people lived in the surrounding neighborhoods, Peterson said. But like so many other neighborhoods in the city, rising rents have displaced portions of that community and they’ve been replaced with more upwardly mobile and straight neighbors.

“I’m not really sure it would reflect what’s here now,” Peterson said, adding that the community didn’t need a cultural district.

Garcia acknowledged that over time the city has lost some queer spaces and residents, but added that’s why it’s a good time to ensure that history is preserved. 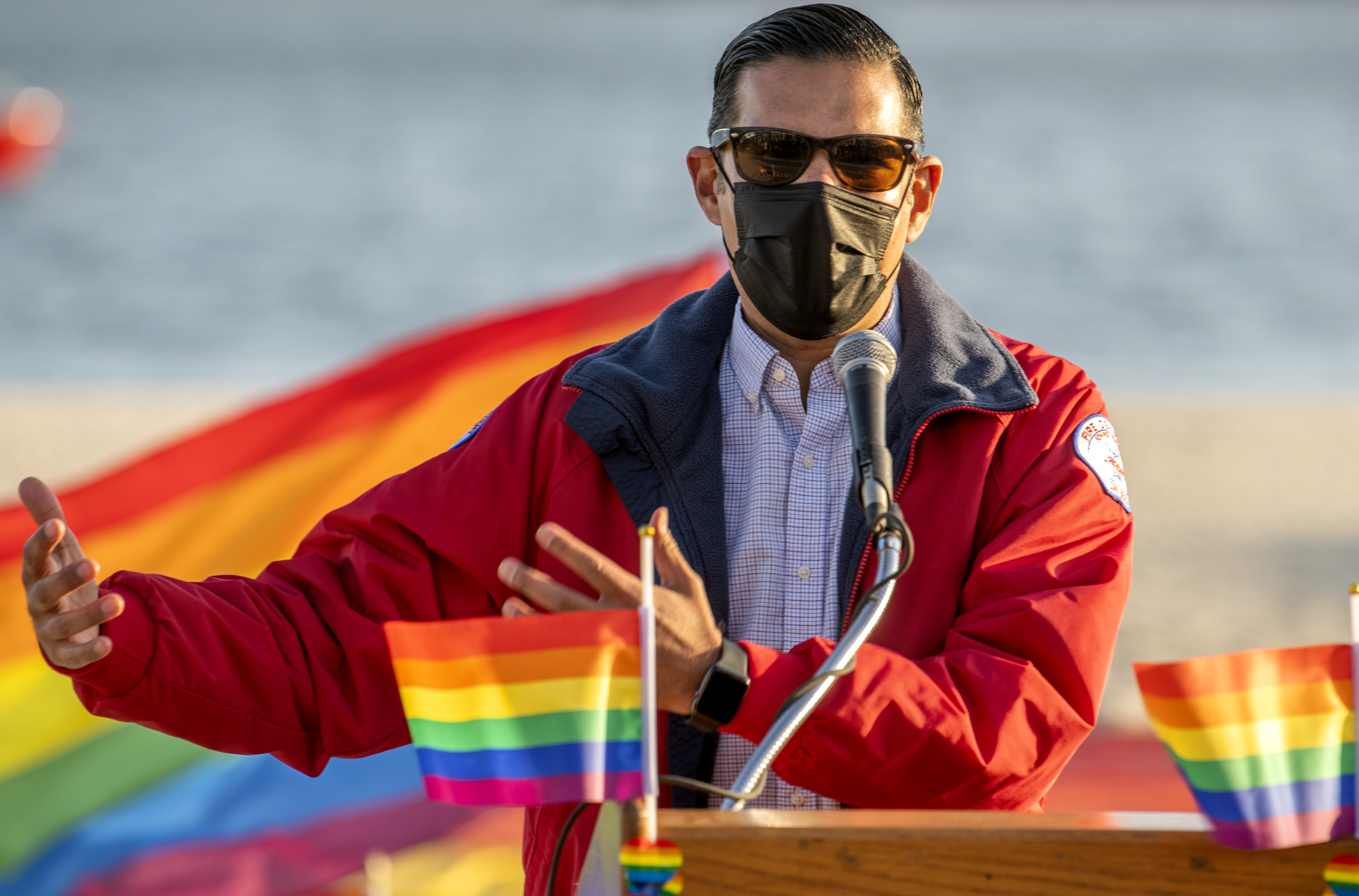 Long Beach Mayor Robert Garcia speaks at a Unity Rally in support of the LGBTQ+ community at the site of the Pride Tower in Long Beach Wednesday, March 24, 2021.

Julie Bartolotto knows about historic preservation. Bartolotto is the executive director of the Long Beach Historical Society, which launched its own effort to preserve LGBTQ history in the city in 2011.

Their Bixby Knolls headquarters has a Pride display up that includes a retired AIDS Food Store Flag that was used to catch donations to support local food banks. It also has the plans for the very first Pride parade held in the city, which she explained the City Council tried very hard to prevent from happening.

Bartolotto explained that in the early 1980s the City Council refused to issue a permit for the parade and tried to make it prohibitively expensive by requiring steep requirements for security that it knew the organizers could not afford. The first Pride parade was eventually held in 1984, but not without a lot of fighting, Bartolotto said.

Understanding how communities have developed and changed is what makes communities strong, she said, and it’s important to know our history so we know what came before the present and how it shaped how we are now.

“Long Beach has undergone huge demographic and political shifts, and the gay community is definitely both a cause and an effect of that as well,” Bartolotto said. “It helped make changes and it’s a safe place because of that change.”

The City Council is expected to vote on Garcia’s request at its June 21 regular meeting.