Kimberly Miller is a natural performer, and as it turns out, she’s also quite a filmmaker.

Miller, who recently completed her junior year at St. Anthony High School, was awarded first prize at the second annual High Tide Student Film Festival, hosted by the Aquarium of the Pacific.

Students from all around Southern California submitted 2-3 minute films in one of three specific categories related to ocean science. Miller’s film, titled “Help the Coral Sing,” earned the top prize in the “Coral Reefs” category. The winners were announced at an awards ceremony earlier this month, and all first-place filmmakers received a $2,000 cash prize, four admission tickets to the aquarium, and recognition in its member magazine.

Miller’s submission stood out from the competition thanks in part to her use of puppets in her film. “Help the Coral Sing” is a short story about Swishy Fishy and his family, who endure the challenges of a deteriorating coral reef that they call home. In order to get all the characters in the same scene, Kimberly received some assistance from her mom, Kaye, who quite literally lent a hand in bringing the puppets onto the screen.

“I’ve always loved to be able to use puppets in everything I do,” said Kimberly, who is also president of the Puppetry Club at St. Anthony. “I’ve always had an interest for it, because it’s such a unique art form.”

Kimberly says she has her mom to thank for her interest in puppetry, growing up watching TV shows like “The Muppets” and “Sesame Street.” Her passion hit new heights during fourth grade when Kimberly did a report on Muppets creator, Jim Henson. Miller counts him as a huge personal inspiration and plans to pursue a career in puppetry after high school. In fact, she may even hone her skills in college since the University of Connecticut offers its own puppetry program. 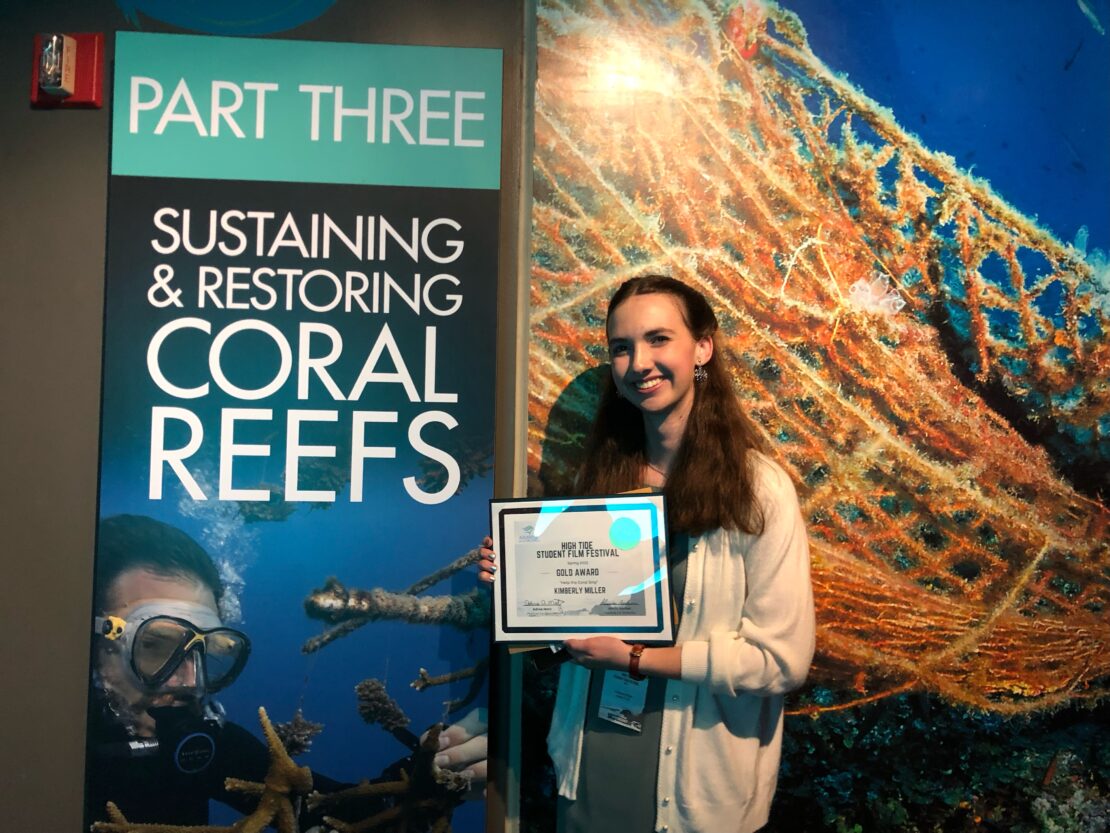 Naturally, Miller applies her love of puppetry to as many school projects as she can, including “Help the Coral Sing,” which was a final project in her ocean science class. The multi-tasking Miller handmade her puppets while simultaneously focusing on her role in the school’s production of “Beauty and the Beast.”

“She’s a pleasure to have in class, she’s a good student, and I can’t wait to see what she does,” said Larry Berlin, Miller’s ocean science teacher. “Kimberly is one of those that belongs on public broadcasting. She could do her own show, I think she’s that good. … When she’s on stage, I don’t care who else is there, she commands the stage.”

In this particular performance, Miller was also able to dive into another one of her passions, discussing ways to protect and preserve the planet.

“I’ve always loved the idea of being able to speak out for conservation,” Miller explained. “I love the forest, I love the ocean. I just love anything that’s related to the earth. In our ocean science class, we had a whole unit on the ocean environment and how important it is, so I think my awareness about that has been heightened and it’s helped me have a deeper appreciation for the environment.”

Miller dreams of becoming a successful puppeteer and hopes to start her own company one day. She even hopes to donate some of those future earnings towards conservation efforts to protect the environment.

As for her $2,000 of prize money, she intends to save that for college, wherever she ends up. Until then, she’s got one more year of high school and perhaps another chance to impress the judges at next year’s film festival.

Other local winners from this year’s competition included Joanna Escobar and Steven Lau-Robles from Sato Academy and Kayla Deng-Martinez from Poly High School.