Up close and personal: Grooming businesses struggle in times of social distancing  • Long Beach Post News
What are the best things about life in Long Beach? • Best of Long Beach 2021 VOTE NOW
- ADVERTISEMENT -

At the beginning of this month, things were looking good for Joy Jalapit. Really, really good. After seven years of perfecting her craft, she and fellow nail artist Mai Lam opened their own salon, Oh Mai Joy! Nail Art Studio, on March 1. Just the two artists, with a suite to call their own in Downtown’s new Salon Row complex on 4th Street.

By mid-March, their calendars had begun to fill up. “It was so exciting, we had been open for two weeks, had started accepting clients – it was really great,” Jalapit recounted.

Then came the coronavirus. And with it, a life of uncertainty.

Across the city, beauty salons and spas began to shut their doors, some on their own accord, some to comply with a city order late last week that mandated all “non-essential” businesses to close, including nail and hair salons, spas and barber shops.

In an industry dominated by small businesses and independent contractors, thousands of workers and small business owners in Los Angeles County were suddenly out of work, many left with no income at all.

Jalapit took her last client on March 14. After that, she and Lam decided to close their shop. “It was really, really hard, but it just made sense,” said the 37-year-old Jalapit. Making matters worse, both women had also been working at a corporately-owned salon in Los Angeles that closed just a day before, leaving them completely jobless. 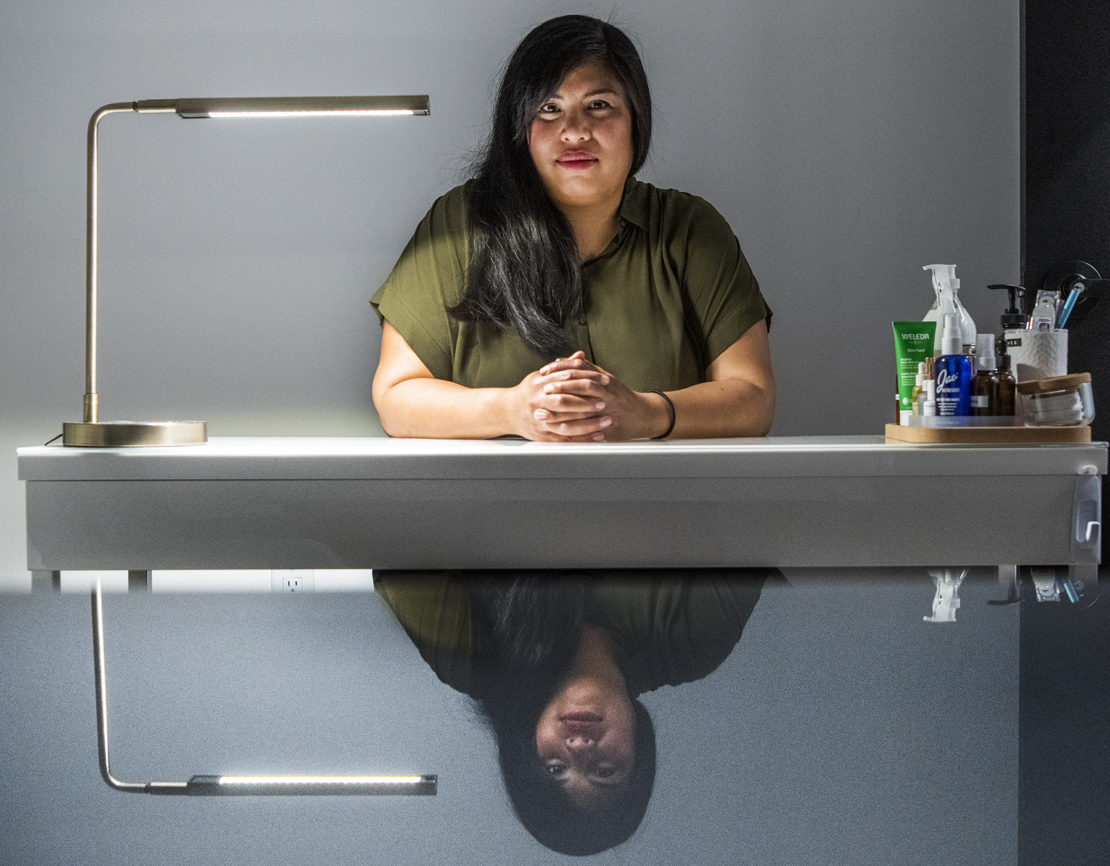 Joy Jalapit, nail artist, at her workspace at Salon Row. Grooming businesses have been mandated to close due to the COVID-19 pandemic. Photo by Thomas R. Cordova.

As the week went on, businesses across the city followed suit. By last Friday afternoon, beauty salons and spas on Second Street in Belmont Shore were all closed, despite some initial confusion over “personal grooming” being included on the city’s list of essential businesses.

Later that day, the city clarified that salons and other “grooming services” are not essential.

Even the most seasoned professionals in the industry have been thrown for a loop. “I’ve never had my phone not ring,” said Holly Dukatz, owner of Envy Spray Tans and Beauty on Broadway. “In 32 years, I’ve always been able to work, to make money.”

Many of her friends and fellow entrepreneurs in the industry are worried they won’t make it through this crisis. “No one anticipated this kind of thing happening,” she said.

For business owners like Dukatz and Jalapit, there are pressing needs today, but there are also questions about the future. “As a business woman, I’m worried about paying my rent, my mortgage,” Dukatz said. But also: “Am I going to have to rebuild everything from scratch?”

Some salons are now trying to figure out how to help employees who have lost their income. To help its staff, Dean Anthony Salon on Second Street was offering gift cards for purchase that can be used when everything reopens, but would provide funds for salon workers ahead of time.

Jalapit said she felt lucky that because of her part-time employment at a different salon, she qualifies for unemployment benefits. “I don’t think it’s going to be anywhere near what I was making,” she said. “But it’s something.”

A new stimulus package passed by the U.S. Senate on Wednesday—and expected to land on the President’s desk shortly after passage by the House—will offer loans to small businesses and unemployment benefits to independent contractors, freelancers and gig economy workers.

Many nail artists, estheticians and hair stylists are independent contractors, which means they are not required to pay into the state’s unemployment insurance system, and—prior to the passage of the stimulus package—didn’t qualify for unemployment benefits.

This has added to the challenges faced by workers in the industry, according to Lisa Fu, executive director of the California Healthy Nail Salon Collaborative.

Founded in Oakland’s Chinatown in 2005, the organization initially focused on addressing the health concerns of nail technicians in the Bay Area, but quickly broadened its scope to include labor rights, immigrant rights and environmental justice across the state.

“We work with Vietnamese women, women of Vietnamese descent, most of them are immigrants and refugees,” Fu said. According to a 2018 survey conducted by the collaborative and the UCLA Labor Center, 81% of nail techs are women, 79% are foreign born and 74% of that group were born in Vietnam.

Independent contractors are not entitled to sick pay and they don’t get paid when they take time off. “No work, no pay,” Fu said.

That means many Vietnamese nail technicians began losing income as early as January, when they took unpaid time off to travel to Vietnam to celebrate Lunar New Year. Upon their return, they found themselves out of a job. Salon owners, afraid their workers may carry the virus from overseas, told them to stay at home, Fu recounted.

The new stimulus package will provide some relief, with $600 in federal assistance per week and a portion of the average state unemployment insurance, which caps out at $450 per week. But until the benefit checks start rolling in, there are still bills to pay and groceries to buy.

Over the past week, the collaborative has shifted most of its efforts toward fundraising, to provide financial aid to technicians who have suffered a complete loss of income as a result of the crisis.

When they’re not busy raising money, staffers are assisting clients with their applications for unemployment benefits.

The Vietnamese language hotline of the state’s Employment Development Department is so busy that many callers just give up, Fu noted. The agency’s online application portal is equally overrun. Sometimes staffers stay up until 2 a.m. to submit applications, when website traffic finally dies down.

Steve Ellis, a professor at Compton College’s cosmetology and barbering program, said the current situation has taken barbers by surprise too, leaving many struggling.

“Most people that go into our business, they go into it young,” he pointed out. “So there’s not really much of a financial education they receive.” Working for themselves, many of these young entrepreneurs take the money they get directly from their clients and spend it quickly, Ellis explained. “They don’t have the savings necessary to support them during events like these.”

Some of his students who are already licensed to work as barbers have called Ellis, asking for advice. With rent to pay, families to feed, they told their professor they’ve considered switching to house calls to make some extra cash.

“We’ve suggested to them that at this point in time, for your own health and safety, you should probably stay at home,” Ellis said. Moreover, he pointed out, most barbers who usually work in salons don’t have the proper equipment at hand to perform work at people’s homes, and private residences don’t offer the same amenities as the shops in which they normally service their clients.

The city’s economic development department, meanwhile, has been inundated with requests from business owners and workers who’ve seen their source of income cut off abruptly due to the coronavirus outbreak and corresponding orders to stay at home whenever possible.

“We are getting dozens of calls an hour,” Economic Development Director John Keisler said in an email.

Keisler said his office is encouraging contractors and self-employed small business owners to speak with a Small Business Development Center advisor about the programs that are the best suited for them, and to visit the department’s website for a list of additional resources.

Jalapit said she has been fortunate to have a landlord who’s understanding of the situation the new salon and its owners find themselves in. They were offered rent deferral until April 19 and the option of a payment plan after that.

“The company that we rent our salon from has been really amazing,” she said. But even the deferred rent will be due one day, and without any clients coming in, it will be difficult for the new business to make up for lost time.

“I have friends and family who can help out financially for a couple of months, but after that, I don’t know what we’ll do,” Jalapit said. “We’ll run out of money at some point.”

Still, Jalapit remains full of joy – pun intended – and hope regarding the shop’s future. “I’m confident that we’ll be able to rebuild again,” she said. “It’s just a matter of time.”

Editor’s note: This story has been updated to reflect more up-to-date information on how much the pending stimulus package will provide to those who are unemployed.