As pandemic drags on, a CalMatters data analysis reveals that students who currently have no option to attend class in person are much more likely to live in poorer areas.

School districts in California’s richest neighborhoods are far more likely to offer in-person instruction than those serving its poorest, though the state as a whole remains behind the rest of the country in bringing students back inside physical classrooms, according to a CalMatters analysis of state data.

Public pressure to reopen schools has increased as coronavirus case rates across the state continue to decline. Gov. Gavin Newsom and state legislators remain in high-stakes negotiations on a plan they hope will result in more schools reopening this spring. About three months remain in most school calendars to plot a return this school year.

But school districts in wealthier areas are offering hybrid or in-person learning to greater shares of their students compared with those in California’s poorest areas. As the end of the 2020-21 school year inches closer, only about one-fourth of the state’s elementary students have opportunities for in-person instruction. Even fewer high school students have a chance to attend school in person.

Several larger school districts, such as Long Beach Unified, have begun setting return dates in March and April for some students. The proposal by Democratic state legislators calls on school districts to bring students in kindergarten through sixth grade back on campuses by April 15. As of today, however, California remains among states with the fewest public schools open for full-time in-person instruction or hybrid learning, where students split time at home and in school.

The California Department of Public Health this month began publishing data that offers, for the first time since schools initially closed almost a year ago, a look at which public and private schools are offering in-person instruction to students.

CalMatters analyzed the state’s data on reopened school campuses as of Feb. 23. The state began collecting this data in late January and is updating it as schools report their statuses biweekly. Data on outbreaks in schools that have reopened is still forthcoming.

Here is a look at how school reopenings have progressed in California so far:

Though hundreds of smaller school districts in California physically opened as early as August, most of the state’s students remain in full-time distance learning.

Though schools self-report their reopening statuses to the state, and are phasing in returns to campus in varying ways, CalMatters defined elementary schools as the state did under its waiver process — kindergarten through sixth grade — for this analysis. 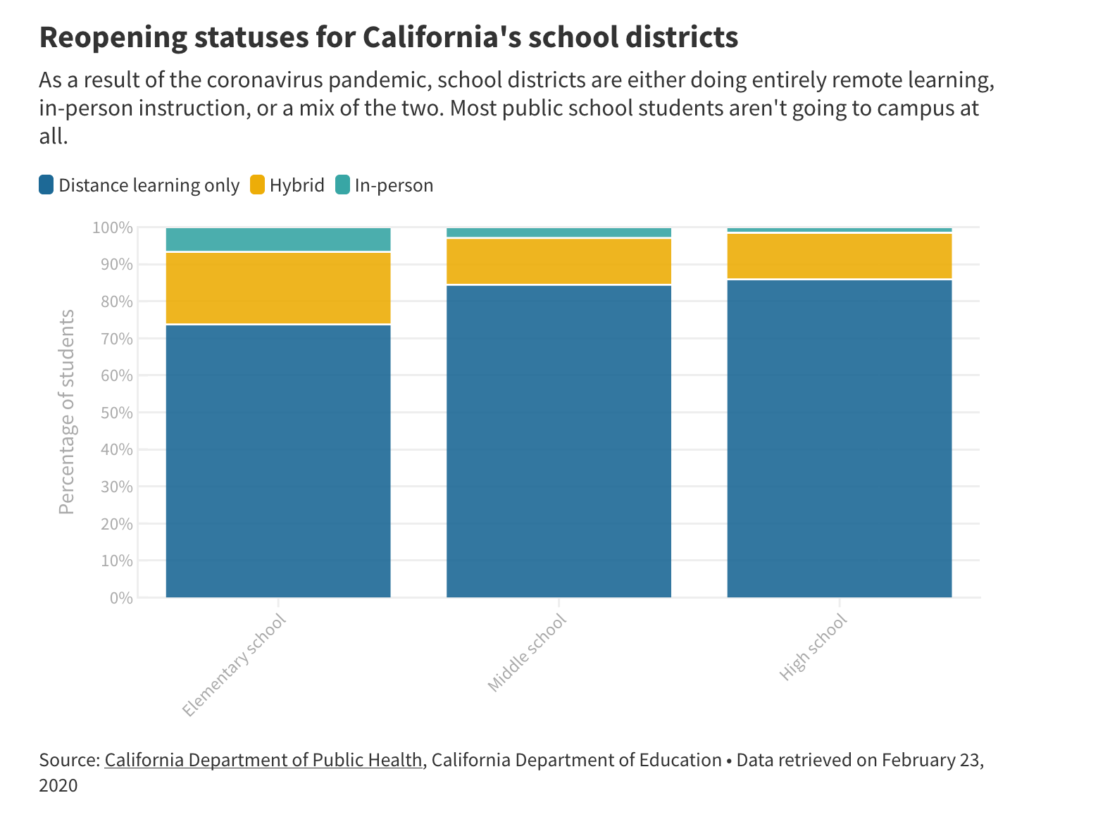 The public-private disparity has been present since as early as September under the state’s elementary waiver program. 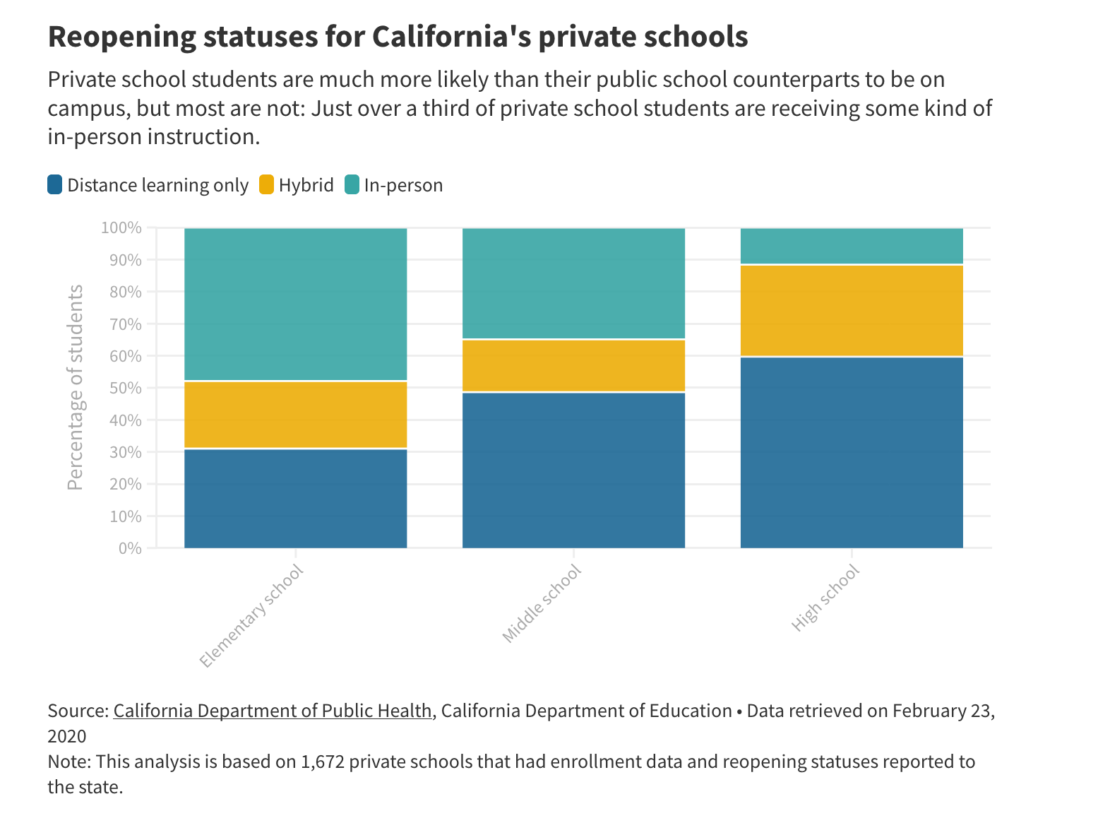 A school district’s concentration of student poverty appears to largely indicate whether their school campuses are open or closed.

California’s wealthiest districts — those with less than one-fifth of their students eligible for free or reduced-priced meals, a poverty indicator — are offering hybrid or in-person lessons to a far greater share of students compared with the state’s poorest schools.

Among the state’s richest schools, nearly 7 in 10 elementary students attend a district that’s offering some form of in-person learning. School districts with the highest student poverty — with more than four-fifths of students eligible for free or reduced-priced meals — are offering hybrid or in-person learning to less than 1 in 10 of their students.

Overall, the higher the concentration of student poverty in a district, the less likely it is to currently be offering students some form of in-person instruction. 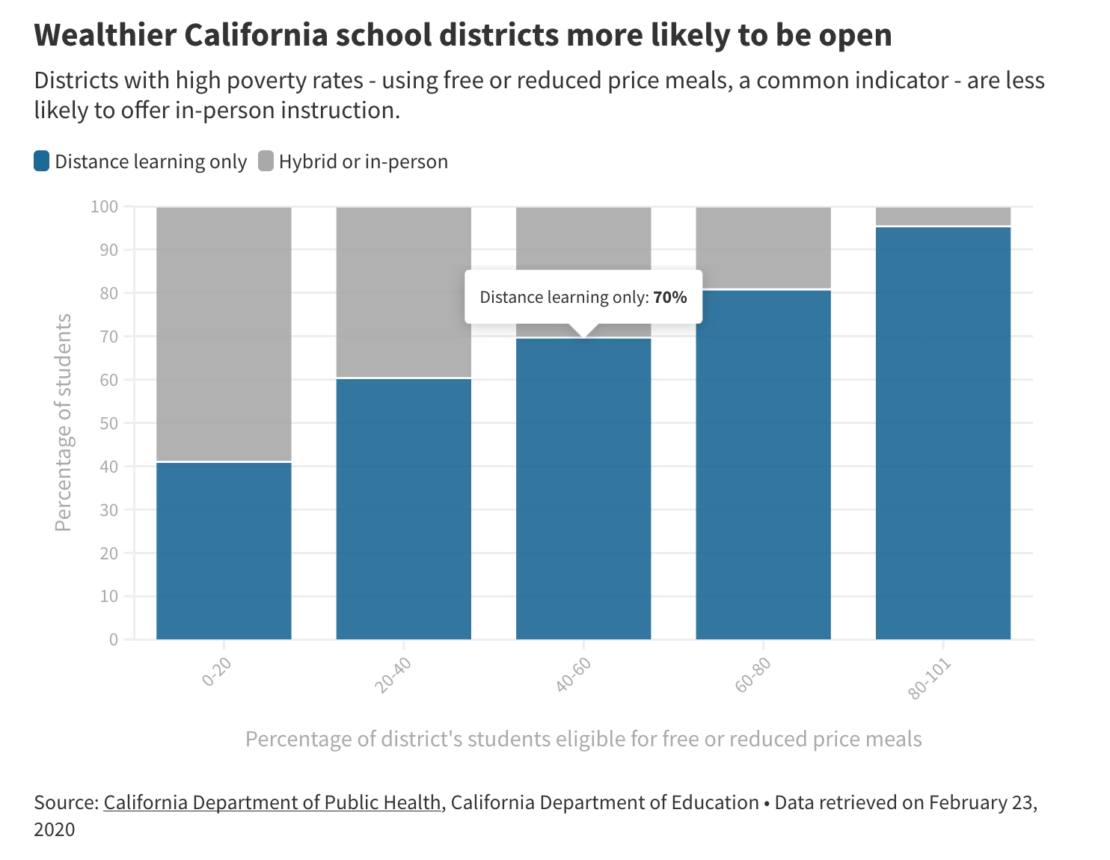 Newsom and some state lawmakers have increasingly called for schools to reopen this spring, but much of the actual decision-making rests with local school boards, superintendents and teachers unions. That’s resulted in disparate realities playing out across the state’s 58 counties, where some have most school campuses open in some form, while school districts in other — sometimes neighboring — counties remain mostly closed.

Elementary schools in more than two dozen counties mainly in Northern California and the Central Valley, for example, are almost all offering either hybrid or in-person learning. Most of these counties have smaller student populations. 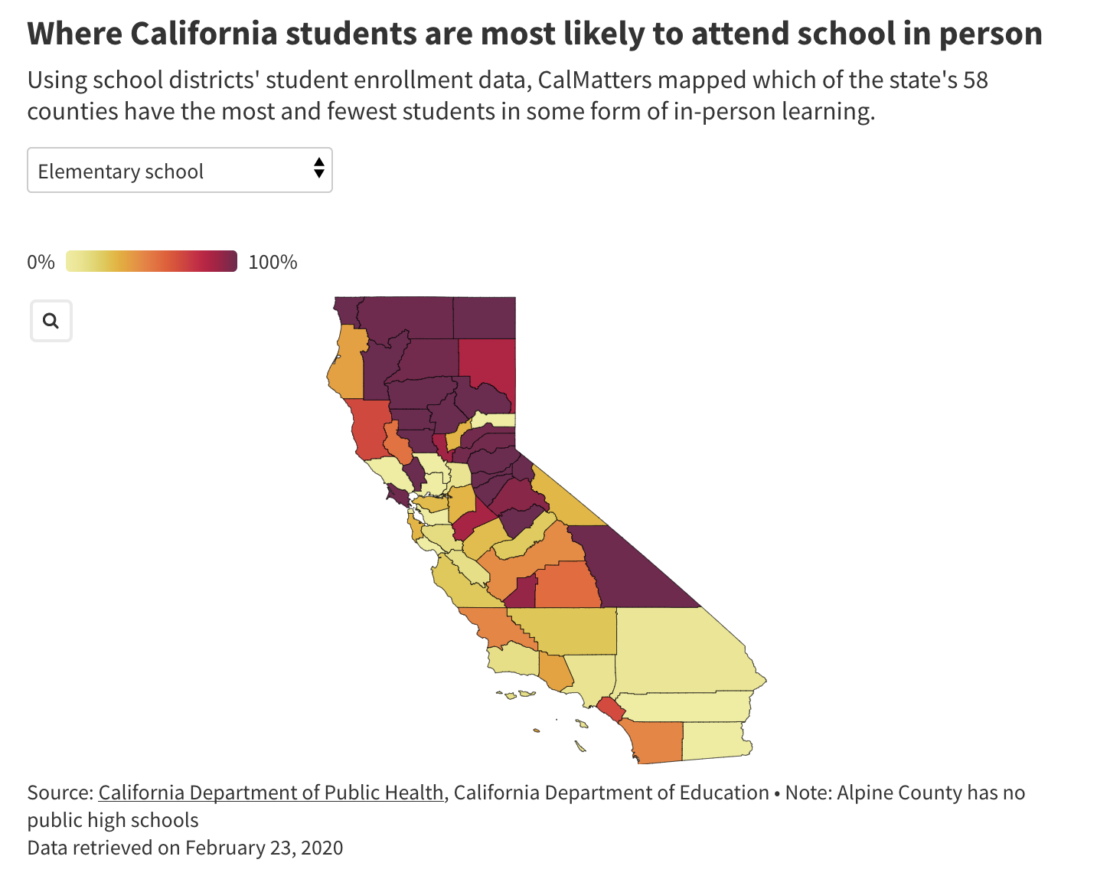 “I am normally a huge proponent of local control,” said Assemblymember Phil Ting, a San Francisco Democrat. “But this year local control has been a complete failure.”