Long Beach is throwing a bash on May 18 to celebrate the 125th anniversary of its incorporation. It’s going to be a lot of fun, and the hosts, Long Beach Convention and Visitors Bureau and the Long Beach Convention Center, totally had me at “dessert stations.” And if that hadn’t done the trick, the party, to be held at The Cove beneath the Terrace Fountain Plaza, will also feature firepits, live music, food trucks, selfie stations, LED game tables, club seating and…a BIG SURPRISE.

Will I be there? Absolutely not. For one thing, I wasn’t invited. CVB boss Steve Goodling told me he assumed I would be my willowy executive editor Melissa Evans’ plus-one, but she told me the same thing: absolutely not.

“So there’s still hope for me?”

At this risk of sounding bitter and angry, I’m glad I’m not going, because it’s a bogus bash and I’m going on the record as saying the city is, in fact, 134 years old. It was 125 years old nine years ago and the day went by without comment, but that’s sort of beside the point.

The city was originally incorporated on Feb. 10, 1888, and there are a few of us still alive who recall that in 1988, the city appropriately threw a massive 100th anniversary bash—a year-long civic celebration costing nearly $2 million, with more than 130 sponsors from Long Beach organizations and companies anteing up for the fun.

The opening centennial celebration kicked off in January of 1988 with some 3,000 celebrants in the parking lot of the Queen Mary off with a blast of the horn from the ship. It featured an 800-pound birthday cake and free “I’m A Long Beach Native” T-shirts to everyone who could prove they were one. The town was littered with centennial flags, posters, mugs, patches and all manner of signage all year long. 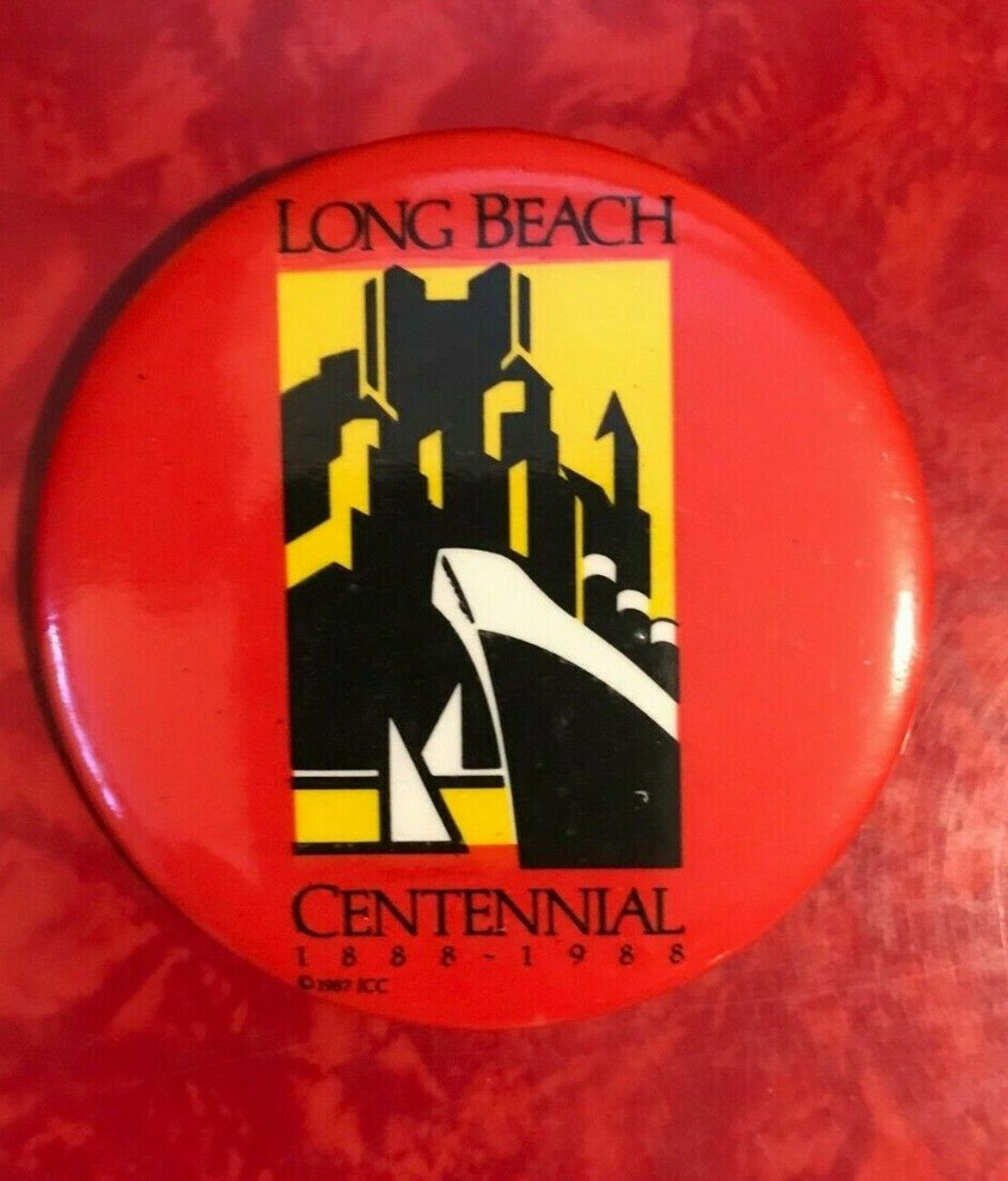 A commemorative pin for Long Beach’s centennial celebration in 1988.

And it was all, if you’ll allow me to repeat myself, keyed to the 1888 incorporation of the city.

And now the city is celebrating the 125th anniversary of its incorporation, so I sent a message to the city’s chief spokesman Kevin Lee, to gently inform him of the fact that this year isn’t the 125th anniversary of its incorporation, and after a while, he sent back a photo of the city seal, which reads “Incorporated in 1897,” with the message that the city’s going with the seal date, to which I replied that surely he’d recall the fact that we celebrated the city’s centennial wildly in 1988, not 1997. He replied that he did not recall.

So I messaged City Manager Tom Modica with more or less the same gripe. He patiently replied, “I think we’re going with the (second) incorporation, 125 years of continuous ‘cityness.’ I think it would be OK to note that we were a city (in 1888), then disincorporated, but it’s 125 years since we incorporated as the Long Beach we are today.”

“I have no idea!” replied Modica, and the back and forth continued on into the night. As far as I know, the city has never celebrated any anniversary connected with the 1897 re-incorporation, city seal be damned.

Of course you remember the hoopla for the city’s 50-year Golden Jubilee in 1938, a joyful celebration of the birth of the city—in 1888. Did the city celebrate anew in 1947, the 50th anniversary of its second incorporation and its cityness? It did not.

Here’s a brief story about the two incorporations of Long Beach:

After the initial incorporation one, in February 1888, the new government’s Ordinance No. 8 prohibited saloons, gambling houses and other institutions “dangerous to public health or safety.”

Though Long Beach was a largely Methodist town back full of Prohibitionists then, there were enough residents who thought it wouldn’t hurt to have a saloon or two in town, just for a little companionship and maybe a glass of loudmouth to cut through the road dust and, on July 24, 1896, they turned out in enough numbers to vote for disincorporation and fell into the clutches of Los Angeles County.

The county was cool with the additional tax money, but didn’t really feel like providing services to the town and, further, the county didn’t issue any saloon permits, so in December of 1897 the citizens, fed up with being the county’s stepchild, voted to reincorporate.

And I’m saying that the reincorporation for the cup of coffee when Long Beach wasn’t incorporated doesn’t qualify as the birth date of the city. So I won’t be at the historically flawed party, even if Melissa finally runs out of options and invites me.