For years, the longtime detective had worked gang cases, but in 2017, he took on an extra assignment: On overtime, he’d roam a downtrodden stretch of Long Beach Boulevard to offer people help, no strings attached.

From his gang work, Zamora knew how to quickly spot pieces of someone’s life that others missed, according to Shoshanna Scholar, who worked with Zamora on the experimental project.

She remembers Zamora recognizing the tattoo on a woman’s face—a tip about who her pimp was and a detail that informed his question to her: Are you tired? Would you like a little bit of help?

“He was just very polite,” said Scholar. “He would let her know that he understood a little bit more of what was happening around her and was also saying … is there something we can help you with?”

The answer could be small—a bag of Cheetos or help getting a haircut—said Scholar, who runs harm-reduction and diversion programs for Los Angeles County. But it often led to the real need, usually housing or help reuniting with family. All of this was a strategy to keep people out of jail. Instead of an arrest, Zamora’s clients—often homeless or addicted—were given housing and other services as long as they were willing to take the offer, which involved showing up to an initial session with a caseworker.

In the end, those Zamora helped frequently ended up with his phone number and a new ally—someone willing to write an expungement petition so you could get a job, or go to bat for you in front of a judge who was weighing whether to lock you up.

“He was such a special person,” Scholar said.

It’s part of why she and so many of Zamora’s colleagues were shocked when the 20-year veteran of the Long Beach Police Department killed himself.

Zamora’s fellow LBPD officers found him Saturday with a self-inflicted gunshot wound outside the police substation on Willow Street, according to authorities. The news shook his colleagues, many of whom saw him as a leader and role model in the department.

Zamora, 44, had a work ethic and an innovative streak that had an outsized effect on the city of Long Beach, according to people who saw him in action.

Haubert credits Zamora with revolutionizing the city’s strategy on gangs and spearheading a more humane posture on homelessness and drug addiction.

“He is responsible for saving lives,” Haubert said.

Zamora earned Haubert’s admiration soon after they met when he suggested streamlining the city’s gang-injunction system. Soon, Zamora set about creating a digitized record system and training officers on the tool. It gave them easy access to a list of court orders that individual gang members had to obey—making it easier to spot violations. It sent the number of gang arrests in Long Beach skyrocketing, according to the City Prosecutor’s office.

But, Haubert said, Zamora knew arrests alone were not a sustainable solution to gang violence. The pair soon gained national recognition for a three-pronged strategy that included heading off gang membership through outreach to at-risk kids and offers of tattoo removal and job training to people looking to leave their gang affiliations behind.

“He would make a difference in any assignment that he was given,” Haubert said. He became a fixture in the city prosecutor’s team—so essential to the strategy and execution that he was the only cop with an office in City Hall.

“It was such a smart thing to have him embedded in our office,” Haubert said. “It basically unlocked and unleashed a lot of these ideas.”

In 2017, a new idea arrived. Long Beach was asked to participate in a pilot program with LA County that imagined a new role for police officers. Instead of arresting people for repeated drug or prostitution offenses, the officers would partner with social workers and care providers to offer someone housing and counseling. 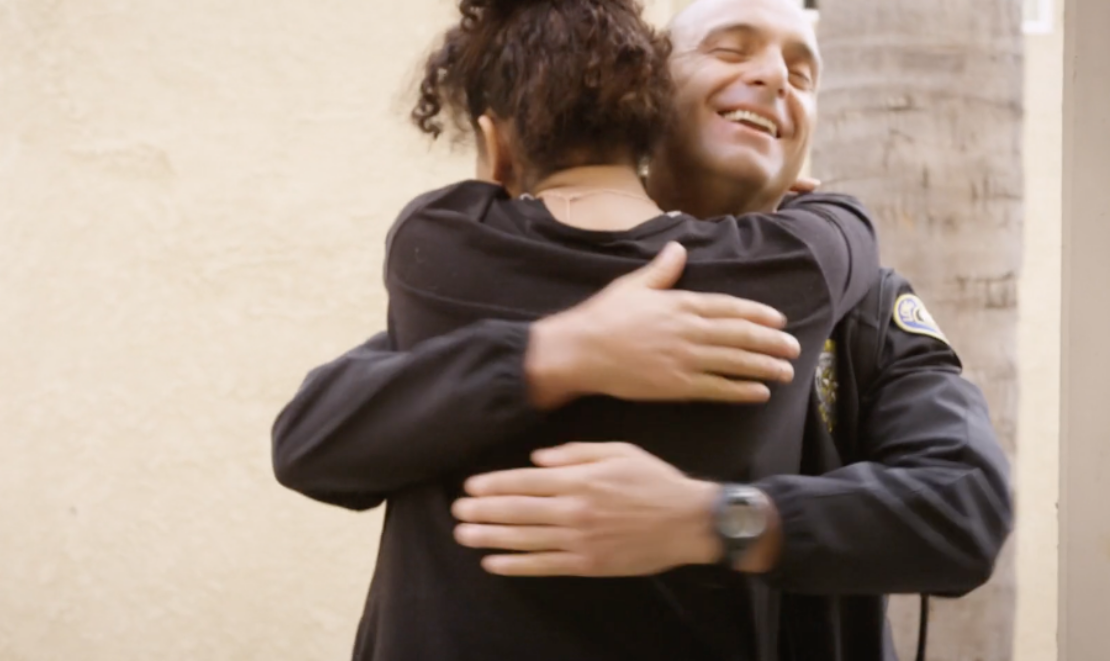 Chris Zamora embraces a woman he helped find housing and helped get her criminal record expunged as part of the Law Enforcement Assisted Diversion program. Photo courtesy the Office of Diversion and Reentry, LA County DHS.

“Not only was he a leader and someone that others in law enforcement respected, but he truly cared about Long Beach,” Haubert said.

Scholar, who oversaw the LEAD program, met Zamora as the team began brainstorming how to execute a plan, which would focus on a track of high crime and prostitution along a stretch of Long Beach Boulevard that cuts across the Los Angeles River and into South Los Angeles.

Scholar came to LEAD with a background in needle exchanges and other harm-reduction programs, so she was initially skeptical about partnering with police, whom she’d seen arrest and hassle her clients.

But Zamora did not fit that mold, she said. He had an open-minded, compassionate approach that seemed to clash with the traditional view of hard-nosed law enforcement.

“I had never met a vegan cop before,” she laughed.

He was willing, she said, to do the hard work of building trust with people on the fringes of society.

In one case, he brought a group of sex-crimes detectives to a homeless encampment along the Los Angeles River. They explained the concept of sexual assault to a group of women who’d become so used to such abuse that they just considered it part of their day-to-day life, Scholar said. On another trip to the encampment, K-9 officers brought out dog food and gave training tips for the residents’ pets.

“It was just like a bunch of cops being really creative and using what they knew,” Scholar said. “And that encampment, those folks really responded to it.”

The pilot program proved successful, actually reducing recidivism and saving money, according to an assessment by experts at Cal State Long Beach. City officials are still trying to find a way to roll it out more broadly across Long Beach now that state grant funding has ended.

Zamora’s death has also reignited concern about mental health and suicide among LBPD officers. He is the fourth person from the LBPD’s ranks to kill himself in just over four years.

Another well-regarded gang detective, Hector Gutierrez, died by suicide in November 2017. And in January 2019, former LBPD Sgt. Don Campbell—who’d worked with Zamora in the gang detail and on the LEAD program—also shot himself in the substation parking lot where Zamora would be found dead two years later. Officer Keith Finch also died by suicide in February 2020.

The deaths forced local police to confront what the Long Beach Police Officers Association called a crisis of suicide in the profession. In 2019, the LBPD launched a first-of-its-kind counseling program for its officers to try to break down a culture of stoicism and silence around mental health. Counselors are now available to officers 24-7.

Scholar said she talked with Zamora about Campbell and Gutierrez. The topic came up after her own friend died by suicide. She was alarmed to hear two people among such a small group of specialized gang officers had killed themselves in such a short span.

Searching for a way to help, she gave Zamora mental health resources to share with his colleagues and left open an offer to talk any time he needed.

Zamora was grateful, Scholar remembers, but he told her, “Cops don’t do that. We’re not good at therapy.” Instead, he said he was taking care of himself—running for exercise and doing yoga.

“He seemed like one of the most stable people around,” Scholar said.

Zamora is survived by his wife and two kids. Funeral services are pending.

Help is always available. If you or someone you know is exhibiting warning signs of suicide call the National Suicide Prevention Lifeline at 1-800-273-TALK (8255). Or use the Crisis Text Line to communicate with a trained counselor by texting 741741.

Editor’s note: This article was updated to include Officer Keith Finch’s death in 2020.