As many as 37 businesses could be eligible to stack additional shipping containers in the city after an executive order was issued that month temporarily lifting height limits in hopes of easing the backlog of ships outside the Port of Long Beach.

City Manager Tom Modica issued the order Oct. 22 that lifted the city’s rule limiting containers to being stacked two high, or about 16 feet high, outside of the port area, primarily in West and North Long Beach. There is no limit inside the port-related industrial zone.

The order lifts the limit for the next 90 days and allows the stacking of containers to four high, or as high as five containers if city officials deem it safe, in other areas of the city. A standard shipping container is just over 8 feet high.

In a presentation to the City Council Tuesday night, Development Services Director Oscar Orci showed a map of businesses that could potentially accept more shipping containers from the overflowing port complex. The sites were largely clustered just above the port and in North Long Beach—though not all could take advantage of the temporary change.

“Specialized equipment is needed so it may limit stacking activity,” Orci said of operators wanting to stack higher than two containers high. 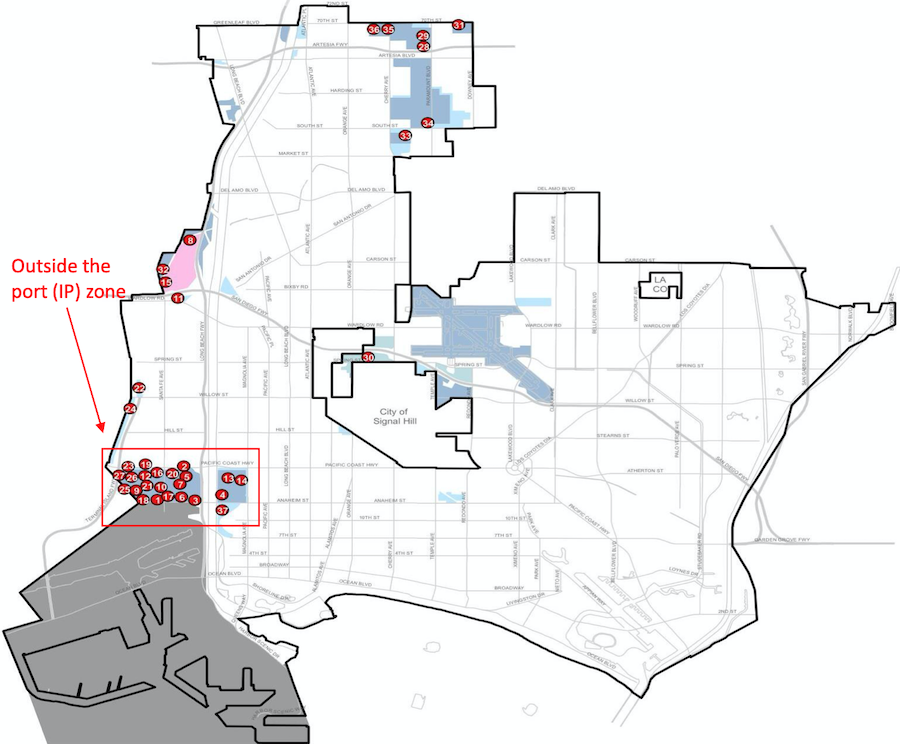 Meanwhile, dozens of ships have been anchored off the coast of Long Beach for most of the year as the port has struggled to process a historic influx of cargo.

Port of Long Beach Executive Director Mario Cordero said Tuesday that he believed that the port would at some point move beyond the current crisis and called the lifting of stacking limits a temporary measure to help goods movement in the country.

The council supported the measure, and its vote formalized the city manager’s order, with Councilman Al Austin calling it a “painful” move being made to support the supply chain’s return to normalcy. But Councilman Rex Richardson raised concerns that this situation might not be as temporary as everyone hopes and said that if it persists there needs to be more public outreach.

“What we don’t want to do is take these neighborhoods’ approval for granted,” Richardson said. “We don’t want for the way that we address this national crisis, for it to be on the backs of those most impacted.”

Richardson said that if the problem extends past 90 days, that the affected communities should be consulted about any extension of the suspended container stacking rules.

The backlog at the Port of Long Beach and Los Angeles has drawn federal and state responses with the White House announcing a spending plan Tuesday that could put $17 billion toward improving the nation’s ports to try to alleviate the stress they’re currently under.

The ports could also be transitioning to a 24/7 model of operation.

Are the Long Beach and Los Angeles ports operating 24/7, as Biden claims? Not quite