Long Beach is updating how it will charge developers who choose not to include affordable units in their projects and how long affordable units must remain affordable under the city’s inclusionary housing policy that was approved earlier this year.

Changes to the city’s policy will now require affordable units to remain affordable for at least 55 years and would last through the entire life of the project instead of being phased out. The same would apply to units that are created under the city’s no-net-loss provision, which requires developers to replace affordable housing demolished to build new units at a one-to-one ratio.

The city’s inclusionary housing policy applies to new construction in the Downtown area and extends up the Long Beach Boulevard corridor to the 405 Freeway. The remainder of the city is not subject to the policy that will eventually require 11% of units in a rental development, and 10% of ownership developments, to be set aside as affordable units.

The policy applies to developments with more than nine units.

Mayor Robert Garcia said that the policy was crafted by housing advocacy groups, developers and industry representatives over the course of years. While the policy isn’t something everyone loved, Garcia said it was a big step forward for Long Beach.

“This was viewed as an absolute step forward so that every single development built has affordable housing built into it,” Garcia said. 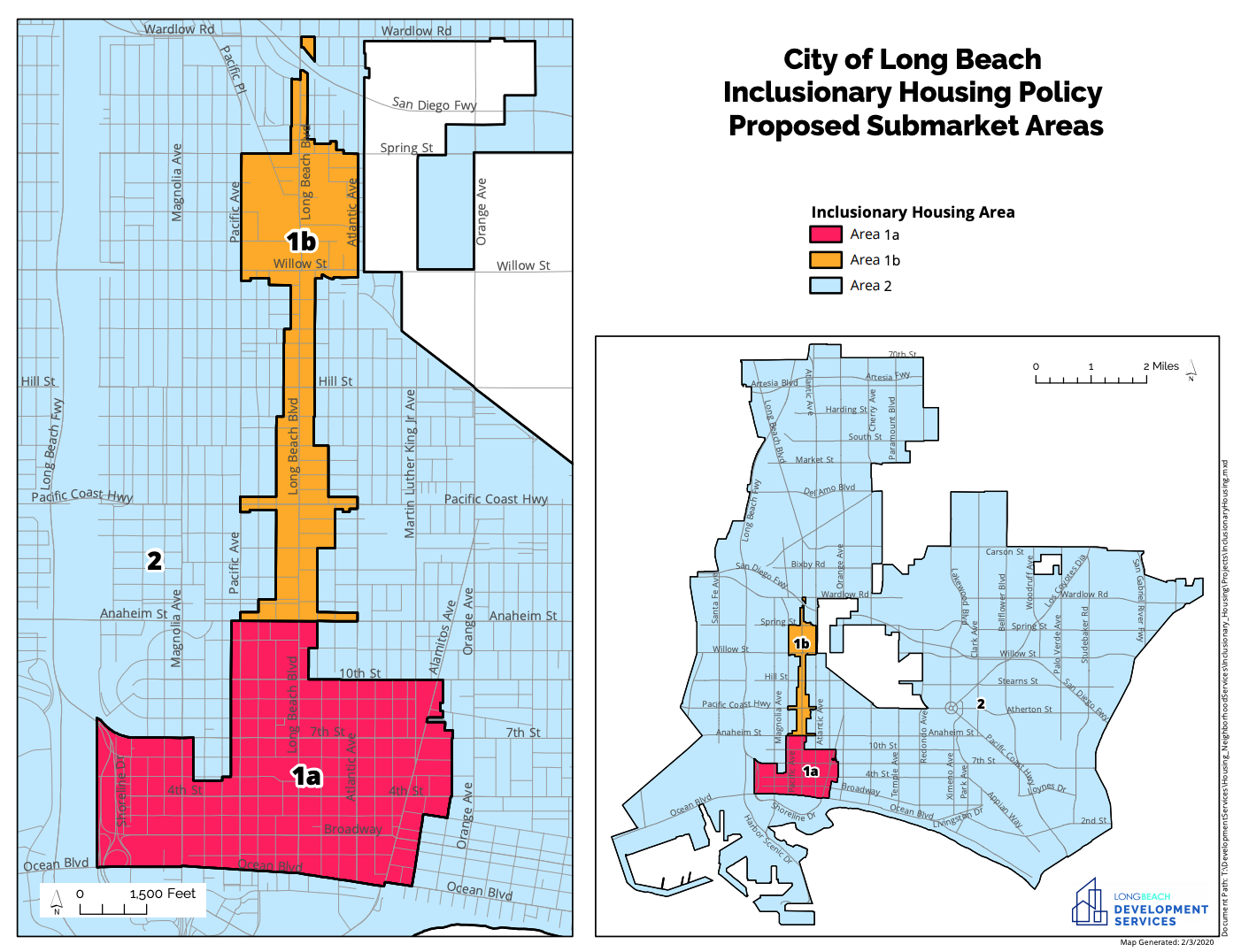 A map of the region of the city that the inclusionary housing policy applies to.

The City Council approved the inclusionary housing policy in January after years of discussion of how it would be implemented.

However, when the council approved the policy it asked for amendments to be brought back for it to decide on how long the units should remain affordable and whether it would keep a sunset clause in place that allowed developers to demolish low-income housing without replacing it.

The in-lieu fees, which were set to be phased in with the largest fees being charged starting in 2023, are now going to be tied to the annual percentage change in new home values.

In January, the council adopted rates that would have a developer pay in-lieu fees of $47.50 per square foot for rental units or $390,400 per unit, if they forgo including affordable housing. For ownership units not built, they would have to pay $36.40 per square foot or $430,000 per unit.

Those fees will be put into an affordable housing trust fund that will be used to build very low-income housing units.

The council requested in January that the fees be tied to the actual cost of construction and the land at the time the fees were paid but an analysis contracted by the city said it would be “time consuming and costly” to gather the data and recommended tying the annual fee adjustments to the annual percentage change in home values.

In-lieu fees were previously scheduled to be adjusted every three years.