City leaders get blasted with obscene messages—but who were they from? • Long Beach Post News
- ADVERTISEMENT -

A candidate running for Long Beach City College’s Board of Trustees says someone has used his phone number to leave obscene robocall messages for a number of city leaders.

The Post confirmed that at least 11 people—including members of LBCC trustees and City Council—received a phone call from a number connected to long-time realtor Dick Gaylord, who is running to fill the Area 4 seat.

The calls were received about the same time—most around 4:22 a.m. or 4:23 a.m.—and included the same 30-second recording with sexually explicit sounds, indicating that a possible robocall device was used.

Gaylord said he has filed a complaint with the Federal Communications Commission.

Gaylord, 76, said he went to bed early Wednesday night after suffering from an ear infection. He said he did not make any phone calls and that his phone’s call log does not show any outgoing calls at that hour.

“I know nothing about this and I was asleep between 4 a.m. and 4:30 a.m. when these calls appeared to be made,” he said.

Gaylord also received a missed call, with no message, around 4:24 a.m. from a cell number with a 310 area code. A woman who answered that number said she is an instructor at LBCC, but has no connection to the candidates or local politics. And, oddly, she said she too received a call in the early morning hours from a “no caller ID” number, with the same obscene sounds local elected officials received.

The calls came hours after a Wednesday night debate featuring Gaylord and two other candidates—Herlinda Chico and Lee Loveridge—who are all running for an open seat on the LBCC Board of Trustees.

Chico, who said she does not have Gaylord’s contact information stored in her phone, said she awoke Thursday morning and saw a 4:23 a.m. voicemail from a number with a 562 area code. Chico said she was unnerved by the sounds on the message.

“It was upsetting, especially to be a women running for office,” she said.

Concerned that she may have been targeted, Chico reached out to friend and LBCC board member Vivian Malauulu, who said she also received a call at 4:22 a.m. from an “unknown caller” but did not receive a voicemail.

Malauulu and Chico later reached out to LBCC board member Uduak-Joe Ntuk, who said he had received an obscene voicemail from Gaylord’s number at 3:54 a.m. that morning.

Ntuk, who has Gaylord’s contact information, confirmed the number with Chico. The Post reviewed screenshots that confirmed the call times and numbers for Chico, Ntuk and Malauulu.

Chico filed a police report on Thursday. The Long Beach Police Department on Friday confirmed that they have received a report on which a victim reported she received an obscene phone call in the early morning hours. Detectives are investigating and anyone with information is asked to contact the Violent Crimes Detail at 562-570-7250

Loveridge, the other candidate, said he did not receive a call from Gaylord’s number. 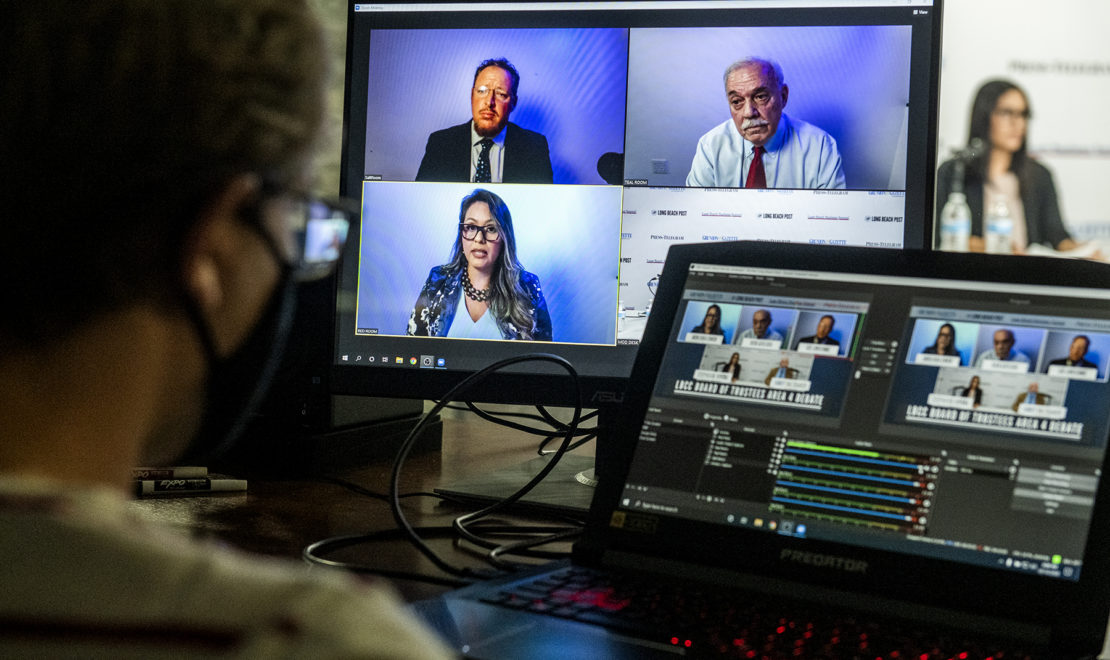 Price, an Orange County prosecutor, said she got the voicemail at 4:23 a.m. and initially thought that maybe Gaylord had called accidentally. She grew suspicious when her chief of staff, Jack Cunningham, said he also got the call around the same time.

“It’s very disturbing that someone would do something like this,” Price said.

Mungo confirmed that she received the call at 4:22 a.m.

Gaylord has long made his cell phone number public on his real estate web page.

He and his supporters suspect the calls are the result of someone “spoofing” his phone number, which is a form of robocalling in which a person is able to enter a host number that shows in someone’s caller ID.

“Someone is trying to disrupt the campaign and it ain’t gonna happen,” Gaylord said.

“Spoofing people’s numbers as part of robocalls, scams, or targeted attacks is a widespread and common problem,” he said. “An attack (where a person’s number is specifically used) is certainly possible. That’s largely because the way phones are made is based on technology that has not kept pace with the new types of threats and challenges we face.”

The news comes as another local election has seen fishy cases of mass fake text messages and social media accounts seeking to disparage a candidate.

In the race for Long Beach’s 8th District City Council seat, residents last week received mass text messages disparaging incumbent Councilman Al Austin, who is in a contentious race against Tunua Thrash-Ntuk (who is the wife of Ntuk, the Long Beach City College board member).

The messages falsely stated that they were paid for by Mungo, Austin’s fellow Long Beach City Council member, who represents the 5th District in East Long Beach and has endorsed Austin for reelection. Mungo has said she never sent out such messages and continues to support Austin.

Thrash-Ntuk has denied any involvement and has said “outside interests” were attempting to confuse voters. She has also denied involvement in a similar campaign involving former 8th District candidate Juan Ovalle and his brother, Carlos, who have had their likeness impersonated on social media under accounts targeting Austin.

Editor’s note: This article has been updated to reflect that Gaylord has filed a complaint with the Federal Communications Commission.