The game is again afoot for the most money ever paid for a home in Long Beach.

It’s a game for the wealthy; looky loos aren’t even granted a peek inside homes of this caliber in which proof of funds is but one hurdle to gain a gander of the property.

Last week saw the listing, by Keith Muirhead, of a property at 15 The Colonnade in, of course, Naples, which went on the market last Monday at a price of $10.6 million. If the home fetches that initial asking price, it would be the new leader in the top-dollar contest by a wide margin of more than $2 million.

“I’ve already had a few calls about the property,” said Muirhead. Yes, and a couple of them were from me and they were about $10.5 million shy of the list price; I have no proof of funds. As Muirhead noted, it’s going to take a person with a lot of millions to buy the place. 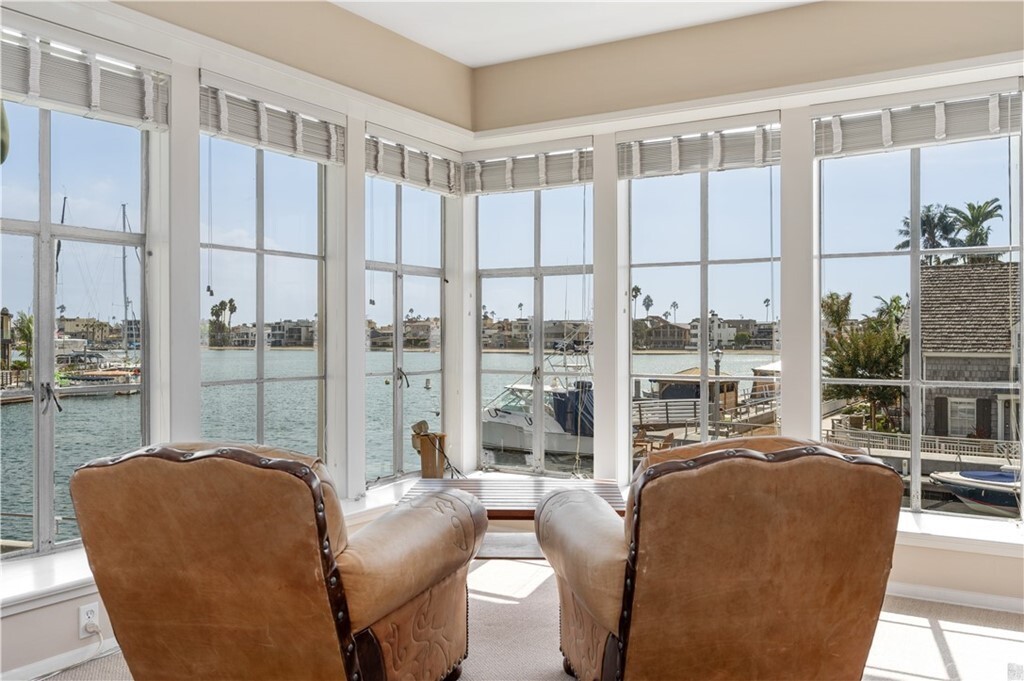 Ten-million-dollar views of Alamitos Bay and the canals of Naples from the home at 15 The Colonnade. Listing photo.

Is the house worth the price?

Well, it’s not not worth it. It’s on a massive lot (not by, say, Montana standards, but certainly gigantic in Naples) of more than a quarter-acre, encompassing three waterfront lots, with 112 feet of water frontage and 146 feet along the adjacent The Colonnade Park.

Does it have a boat slip? It does not. It has a marina, big enough for multiple watercraft and to allow the owners to snicker at neighbors who only have private “docks” for their yachts.

This isn’t the first run at the thus-far elusive $10 million mark in Long Beach. Bob and Audrey Langslet’s Casa Ocean estate on the bluff just west of the Belmont Pier was initially listed at $12 million before it eventually sold for $7.25 million last year. A Naples home sold by Muirhead at 5558 Naples Canal, was listed within pocket change of $10 million with a list of $9.95 million. It sold for $8.2 million in 2007, a record high at the time that lasted through the recession until a home at 55 Vista del Golfo, listed at $10.9 million, sold for $8.5 million in 2015.

The latest property to take a hard run at a historic high was an off-water mansion at 93 Giralda Walk that listed at $9 million but has since been reduced to under $7 million.

The home on The Colonnade was built for automobile dealer and big-game angler Art Hall in 1948 by George Montierth, who is part of the pantheon of great Long Beach architects. His works include numerous residences, the Long Beach Convention and Entertainment Center, the Long Beach Yacht Club and various schools and churches.

Among his more notable residences, in addition to the one on The Colonnade, are the Kresl Residence in Los Cerritos at 3924 Pine Ave., and his own house, Casa Sereno, in Park Estates at 5340 El Prado Ave. 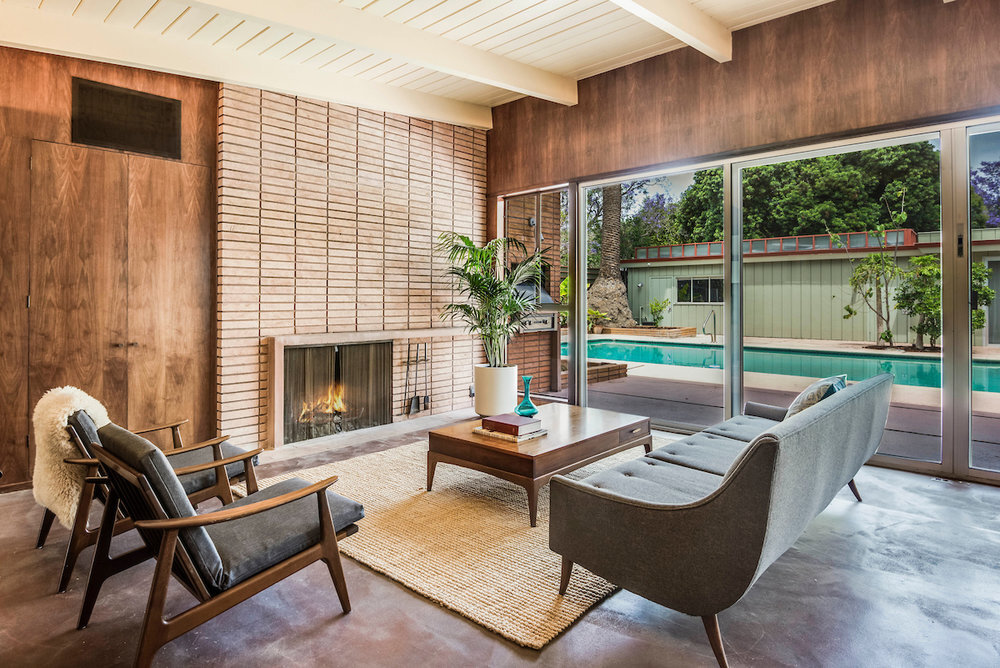 For the Hall residence, Montierth built the home for outdoor living. Already well known for his Mid-Century Modern style (famed Mid-mod architect Paul Tay worked for Montierth on his way up), Montierth pulled out all the stops, with tiered banks of paned glass coursing across both floors, affording awesome views of the water — the home sits at the intersections of Naples, Rivo Alto and Colonnade canals as they spill into Alamitos Bay. You don’t cover up a vista like that with lath and plaster.

The residence is the polar opposite of a tiny house. It’s huge and it gives off more of a resort hotel vibe than a funky beach pad (which is how we like our Naples homes, though the whole beach-pad thing works better on the Peninsula). Long wings that run away from the main part of the house resemble a resort hallway that you might be striding toward your room, bellboy in tow with all your garments.

Between those wings is an utterly authentic Mid-Modern kidney-shaped swimming pool of the sort that people of a certain age may recall seeing advertised on the back of your television guide in the Sunday paper. 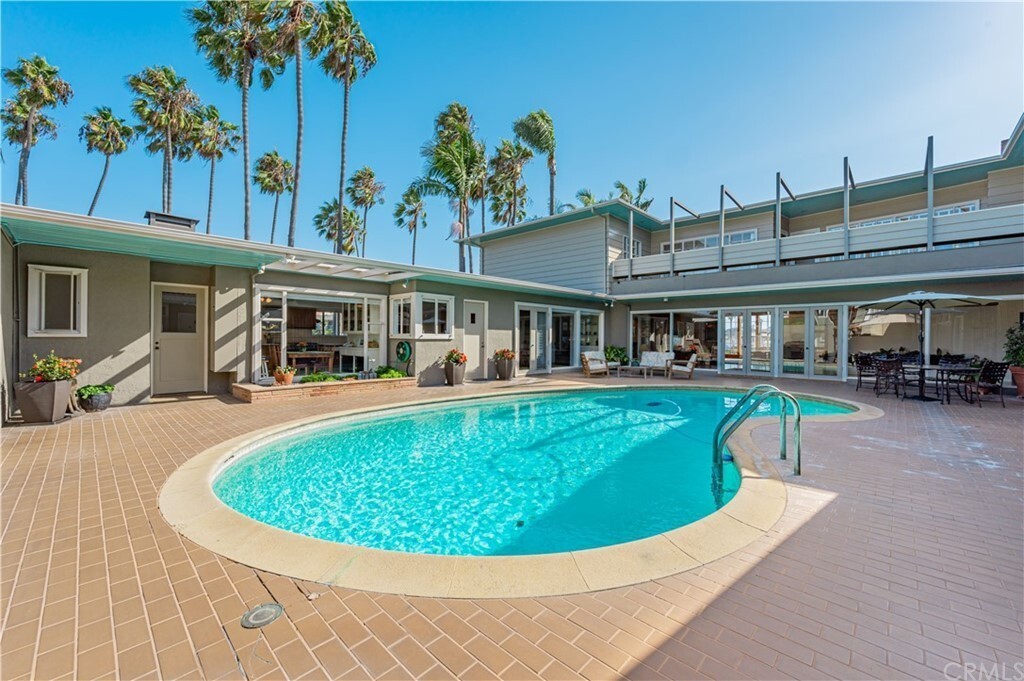 A mid-modern icon: A kidney-shaped pool in the courtyard of the home at 15 The Colonnade. Listing photo.

In many ways, the pool is the highlight of the house, discounting the home’s location and its expansive views.

At over 6,000 square feet, your biggest problems in this house would be locating scattered family members and buying enough furniture to fill the place. The living room and two master bedrooms are black holes for beds, chairs and couches; after being appropriately furnished they still have enough excess room to throw a rodeo.

Other features of the home include a guest house with its own bath and shower, a full walk-in wet bar, wood-paneled walls in the formal dining room with its 10-foot ceiling, an oversized marble fireplace in the living room as well as in one of the master bedrooms, master baths with custom wood closets and make-up rooms and a grand formal entry with 20-foot ceilings and a sweeping staircase leading to the top floor.

If you want to tour it in person, just make sure you can prove you can afford it.