It’s been a monumental week for climate action in Long Beach. Less than 24 hours after the City Council unanimously approved the Long Beach Climate Action and Adaptation Plan, the Long Beach Unified School District’s Board of Education also voted to limit carbon emissions and increase its long-term sustainability.

On Wednesday evening, the school board unanimously approved Board Proposal 3510.1, better known as the Green School Operations – Energy and Sustainability Policy.

That action was the culmination of two years of activism by the Long Beach Green Schools Campaign, a dedicated group of LBUSD students across a number of high schools and middle schools. Green Schools Campaign founder Diana Michaelson, an incoming senior at Poly High School, has been at the forefront of the effort, working directly with district leadership on the policy while also organizing student activists to provide a consistent presence at school board meetings since August 2020.

During its July meeting, the school board delayed its vote on the board policy, allowing additional time to amend the proposal and insert more specific language. For the past four weeks, the Green Schools Campaign has been working with the school district to strengthen the proposal, and students finally got the chance to celebrate in earnest on Wednesday.

“It was definitely nerve-wracking. We obviously really wanted this to pass, but I think it was really empowering as well,” Michaelson said about having to wait one final month to see the policy enacted. “Like we’ve reiterated so many times today, it’s been a collaborative process, especially in these last couple months. … I think we all had the jitters today realizing that this is a really big vote that’s coming up. It was a mixture of nerves, but also relief and faith in the school district.”

The revised proposal included a specific timeline for reducing greenhouse gas emissions by 2045, in alignment with current goals from the state of California. The LBUSD will be transitioning to zero-emissions vehicles and machinery “as rapidly as recapitalization cycles and budgets allow.”

“The main component that was added was an actual target date, and in this case it is 2045, aligning with state legislation,” Michaelson explained. “Having that commitment, that time that we have to get things done by, was something that we were really happy about.”

The policy also calls for the district to reduce energy and water consumption by maximizing the efficiency of current district buildings, exploring the installation of renewable energy systems, and purchasing clean renewable energy from its utility provider. For any new construction or renovations on campus, the LBUSD will ensure that green building standards are being followed, and any existing machinery operating on fossil fuels will be phased out.

In order to track the district’s progress and ensure transparency, the LBUSD is launching a Climate Crisis and Sustainability Taskforce, made up of seven or more “community stakeholders, staff, and LBUSD students.” The taskforce will meet at least quarterly and will report to the school board on an annual basis. They are tasked with setting yearly goals and monitoring the progress of implementing the policy. 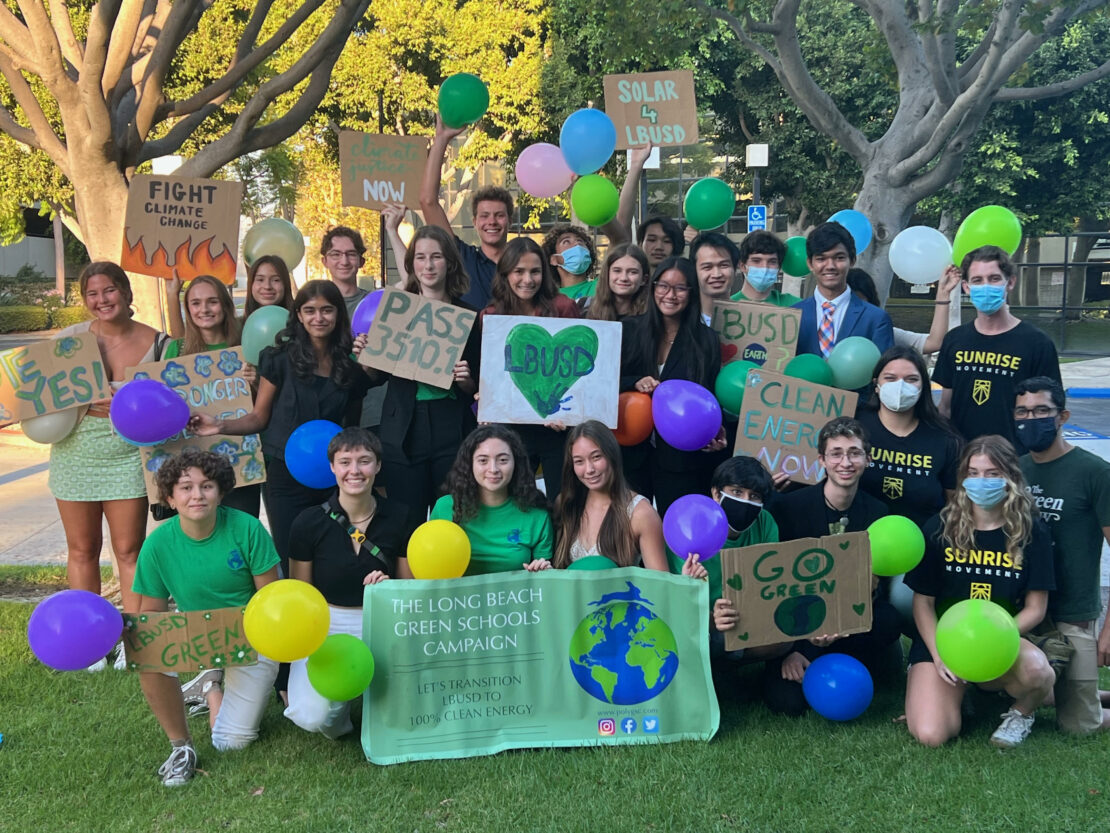 For two years, a group of students continued to press the LBUSD for firm commitments to fight climate change. Photo by JJ Fiddler.

Ruthie Heis joined the Green Schools Campaign when she was still in middle school, and she was thrilled to see the group’s activism pay off. She was also pleased with how the language of the policy was strengthened in the past month.

“I started my journey with climate advocacy, I think four or five years ago, and to me, this represents a huge step for our community,” Heis said. “But with that extra time, we were able to clarify language around vehicle emissions, reducing energy and water consumption. And we were able to put in a target date, which was really important for us to see, because that’s something we’ve been advocating for for the past two years and six days.”

“I want to thank you for your patience, your persistence, and your partnership,” said Board of Education President Megan Kerr, addressing the students from the Green Schools campaign prior to the board vote. Kerr was the first school board member to meet with the Green Schools Campaign nearly two years ago, commencing a journey that culminated in Wednesday’s unanimous 4-0 decision.

“My intention that day was for you to feel like you were heard and valued and respected,” Kerr continued. “We wanted you to be part of the process. I think I said, ‘I don’t know where it’s gonna go, but I know that we need you alongside us in the process.’ So, 610 days later, it’s a pretty incredible result.”