Investigators believe a 1,200-foot (366-meter) cargo ship dragging anchor in rough seas caught an underwater oil pipeline and pulled it across the seafloor, months before a leak from the line fouled the Southern California coastline with crude.

A team of federal investigators trying to chase down the cause of the spill boarded the Panama-registered MSC DANIT just hours after the massive ship arrived this weekend off the Port of Long Beach, the same area where the leak was discovered in early October.

During a prior visit by the ship during a heavy storm in January, investigators believe its anchor dragged for an unknown distance before striking the 16-inch (40-centimeter) steel pipe, Coast Guard Lt. j.g. SondraKay Kneen said Sunday.

The impact would have knocked an inch-thick concrete casing off the pipe and pulled it more than 100 feet (30 meters), bending but not breaking the line, Kneen said.

Still undetermined is whether the impact caused the October leak, or if the line was hit by something else at a later date or failed due to a preexisting problem, Kneen said.

“We’re still looking at multiple vessels and scenarios,” she said.

The Coast Guard on Saturday designated the owner and operator as parties of interest in its investigation into the spill, estimated to have released about 25,000 gallons (94,635 liters) of crude into the water, killing birds, fish and mammals. 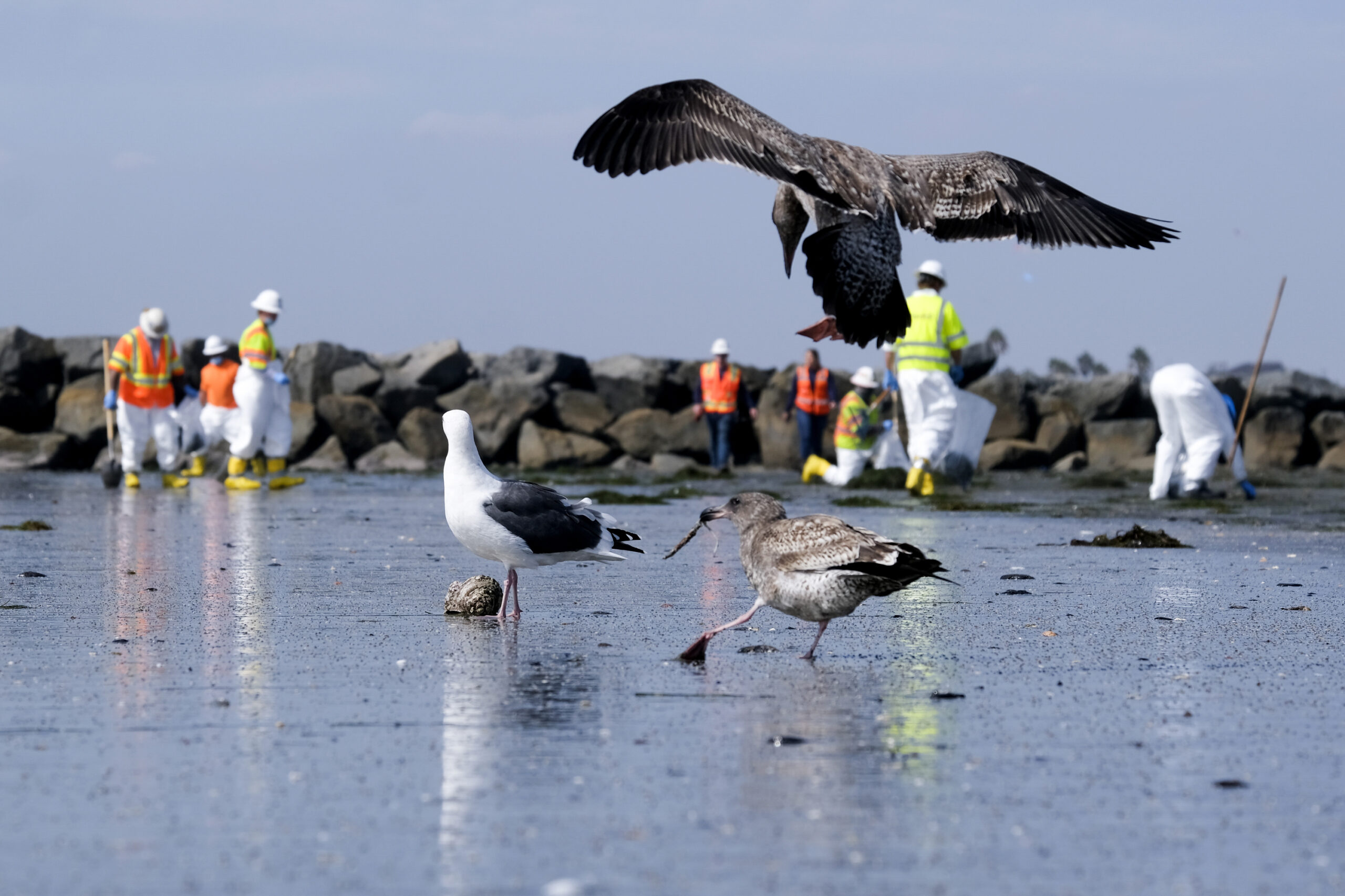 Birds are seen as workers in protective suits clean the contaminated beach after an oil spill in Newport Beach, Calif., on Wednesday, Oct. 6, 2021. A major oil spill off the coast of Southern California fouled popular beaches and killed wildlife while crews scrambled Sunday, to contain the crude before it spread further into protected wetlands. AP photo by Ringo H.W. Chiu.

The accident just a few miles off Los Angeles’ Huntington Beach fouled beaches and wetlands and led to temporary closures for cleanup work. While not as bad as initially feared, it has reignited the debate over offshore drilling in federal waters in the Pacific, where hundreds of miles of pipelines were installed decades ago.

The DANIT’s operator, MSC Mediterranean Shipping Company, is headquartered in Switzerland and has a fleet of 600 vessels and more than 100,000 workers, according to the company.

MSC representatives did not immediately respond to email messages seeking comment. A security guard reached by telephone at the company’s headquarters in Geneva said it was closed until Monday.

The vessel’s owner, identified by the Coast Guard as Dordellas Finance Corporation, could not be reached for comment.

The DANIT arrived in Long Beach this weekend after voyaging from China, according to marine traffic monitoring websites.

The investigation into what caused the spill could lead to criminal charges or civil penalties, but none have been announced yet, and Kneen said the probe could continue for months.

Attorneys for MSC and Dordellas will have the chance to examine and cross-examine the government’s witnesses in the case and also to call their own witnesses, according to the Coast Guard. The investigation also includes the National Transportation Safety Board and other agencies.

Kneen declined to say if any damage was found to an anchor on the DANIT after a team of at least five investigators spent much of Saturday aboard the ship.

At least two other vessels were previously boarded by investigators, who are examining logs kept by the ships’ captains, officers and engineers and voyage data recorders — equivalent to the so-called black box on airplanes.

In response to the new focus on the DANIT, the Houston-based owner of the damaged pipeline, Amplify Energy, thanked the Coast Guard for its continued work on the case.

Amplify representatives have not directly responded to questions about an hourslong delay between an alarm indicating a potential problem with the pipeline and the company reporting the leak to federal authorities.