The oil spill currently contaminating beaches from Huntington Beach to Dana Point seems to have sprung from a rupture more than a foot long in a 17-mile pipeline, officials said today. But they also refused to comment on whether that pipeline’s internal leak-detection system was operational at the time of the rupture, which officials were slow to respond to, according to critics.

In addition, divers found a 4,000-foot section of the San Pedro Bay Pipeline, which included the portion that had been ruptured, was moved out of place more than a hundred feet, officials coordinating the spill response said today.

The 13-inch rupture was the “likely” source of the oil spill, Coast Guard Captain Rebecca Ore said Tuesday. Ore said no more oil was seen coming out of the break in the line. 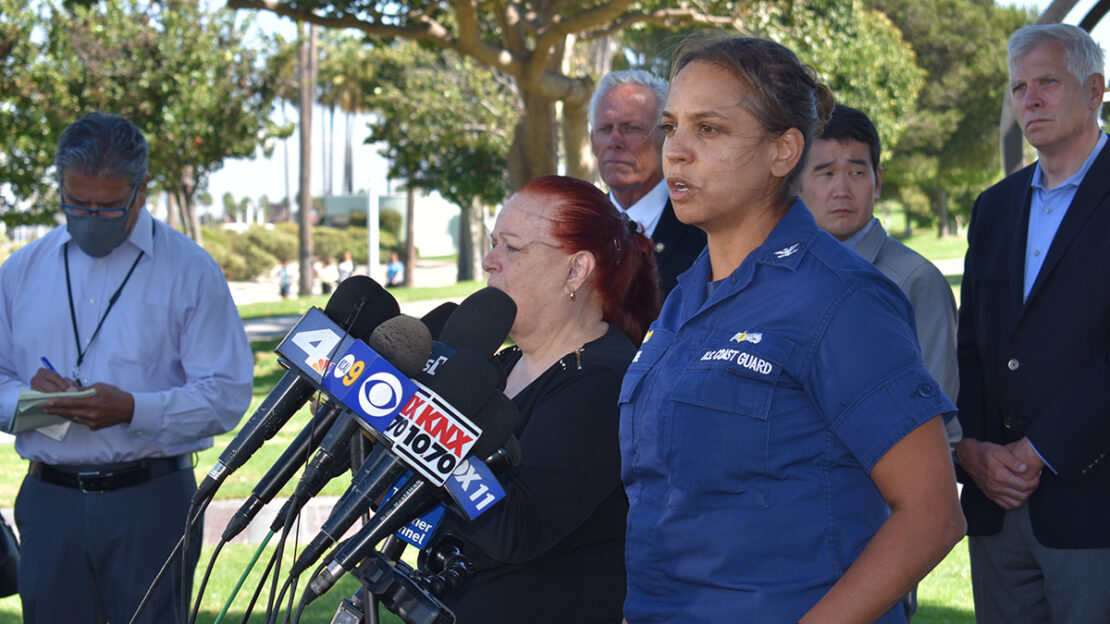 U.S. Coast Guard Captain Rebeca Ore speaks about an oil spill off the coast of Orange County during a press briefing near the Long Beach Aquarium of the Pacific on Tuesday, Oct. 5, 2021. Photo by Sebastian Echeverry.

Martyn Willsher, CEO of Amplify Energy, which operates the pipeline and nearby oil platforms, said the split in the line occurred at the point where the pipeline was most severely displaced, by 105 feet. He said the pipeline is a 16-inch steel pipe covered in concrete, indicating it would take a great deal of force to move and rupture it.

More than 144,000 gallons of oil spilled into the ocean from the pipeline, which runs from Amplify’s oil platform “Elly” to the Port of Long Beach. Beta Operating Co., a subsidiary of Amplify, runs platform Elly.

On Tuesday, officials dealing with the spill refused to confirm or deny any theory as to why that rupture may have occurred, though a ship’s anchor dragging the pipeline remains on their list of possible explanations.

The pipeline that ruptured also included a leak-detection system. Were a rupture to occur, the system would shut down the platform within five minutes, Amplify Energy told federal regulators in 2016. But, at a press conference, Amplify Energy CEO Martyn Willsher would not answer questions about whether that system was operational at the time of the spill, which seems to have started late Friday night or early Saturday morning.

“We are providing all the information that we have prior to the time that we were aware of the spill, which was 8:09 a.m,” Willsher said Tuesday. “Everything up to that point will be fully turned over to the investigative authorities to be reviewed.” 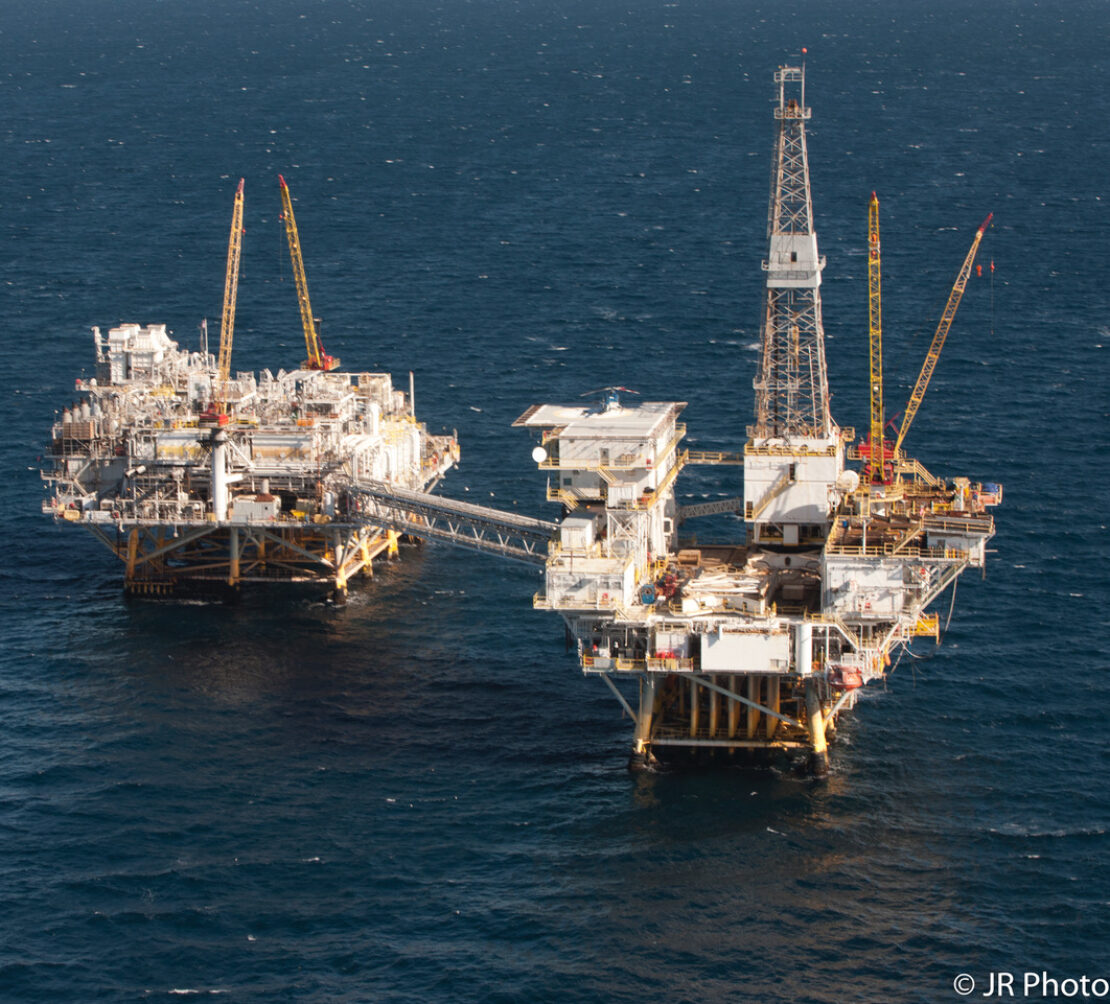 Platforms Ellen and Elly (right) in 2011. A pipeline connecting these platforms to the Port of Long Beach is a likely source of the October 1, 2021 Orange County oil spill. Photo by John Robinson Photography

The Elly platform and the San Pedro oil pipeline that connects it to the Port of Long Beach date to 1981. Shell Oil built the platforms for $400 million atop the Beta Unit oil complex, which was estimated in 1978 to hold 100 to 200 million barrels of oil. So far, the platforms have processed nearly 50 billion barrels, according to federal regulators.

At the time, the Pacific Merchant Shipping Association vehemently opposed the platform’s construction, since they sat in the middle of the shipping lanes freighters used to get in and out of Long Beach and Los Angeles.

“They want to put these platforms on the front porch of the busiest ports on the West Coast,” association president Phil Steinberg told the Los Angeles Times in late 1979.

The pipeline at the heart of the spill is 17 miles long and is 16 inches in diameter. The steel pipe itself is a half-inch thick and is further coated with an inch of concrete. It lies on the seabed, held in place by its own weight.

Though the 1978 Environmental Impact Report for the platforms and pipeline acknowledged that the risk of a “significant oil spill” from the infrastructure existed, it listed the probability of such an event as “low.”

Were a spill to occur and containment and clean-up “are not highly effective,” the report noted, prevailing ocean and air currents could push the oil anywhere from San Pedro to Dana point.

Records kept by the federal Bureau of Safety and Environmental Enforcement, which investigates oil spills, detail a variety of incidents in the last two decades involving the Beta Unit platforms.

A Bureau of Safety archive lists 72 noncompliance incidents—which Beta Operating had to correct—and another 53 warnings.

The platforms also had oil spill incidents under previous owners, according to federal regulators. In 2002, when Aera Energy owned Elly, a six-inch pipe mounted above the waterline at the platform failed due to corrosion, discharging nine barrels of oil into the ocean. There were also small pipeline spills in 2000 and 2001, according to Bureau of Safety records.

Amplify, previously known as Memorial Production Partners, filed for bankruptcy in early 2017. When that case closed a year later, the company changed its name to Amplify Energy.