Column: In Long Beach history, a quixotic quest for tourists, from a whale to the Queen • Long Beach Post News
What are the best things about life in Long Beach? • Best of Long Beach 2021 VOTE NOW
- ADVERTISEMENT -

On the face of it, Long Beach looks like it should be a big tourist town. We get something like 500 sunny days per year, and it’s on the Pacific Coast, which alone should draw crowds to its shops and restaurants and to pay way too much for hotel rooms. Spin it right, and you can even make the breakwater a selling point: it tames our beaches rendering them safe and calm, free of neck-breaking waves that can cripple the strongest surfer and tow toddlers out to sea.

But the beauty that nature has bestowed upon our city has never been enough.

We’ve always wanted tourists and the renown that they bring to an otherwise quiet and frequently beautiful coastal part of the city. And we’ve always done anything to get them. Anything.

It began almost 125 years ago, when Long Beach hollered, “Look! We’ve got a whale!” Because we did. A couple of teenage boys from Pasadena were watching the surf, when they spotted a whale off the shore. And because there’s little in the world that’s more cruel than teenage boys, they swam out and tied a rope around its tail and dragooned some house movers and their team of mules to haul the whale ashore at the foot of Alamitos Avenue near where the Villa Riviera stands today.

A couple of small holes were found on the whale, leading to some talk that it might have been shot by a couple of other boys who had been seen shooting rifles from a boat a day earlier, but the whale was very much alive when the teens hauled it to shore, where it took hours before it died.

And that whale, even while violently struggling for hours to get back to the sea, was Long Beach’s first tourist attraction. 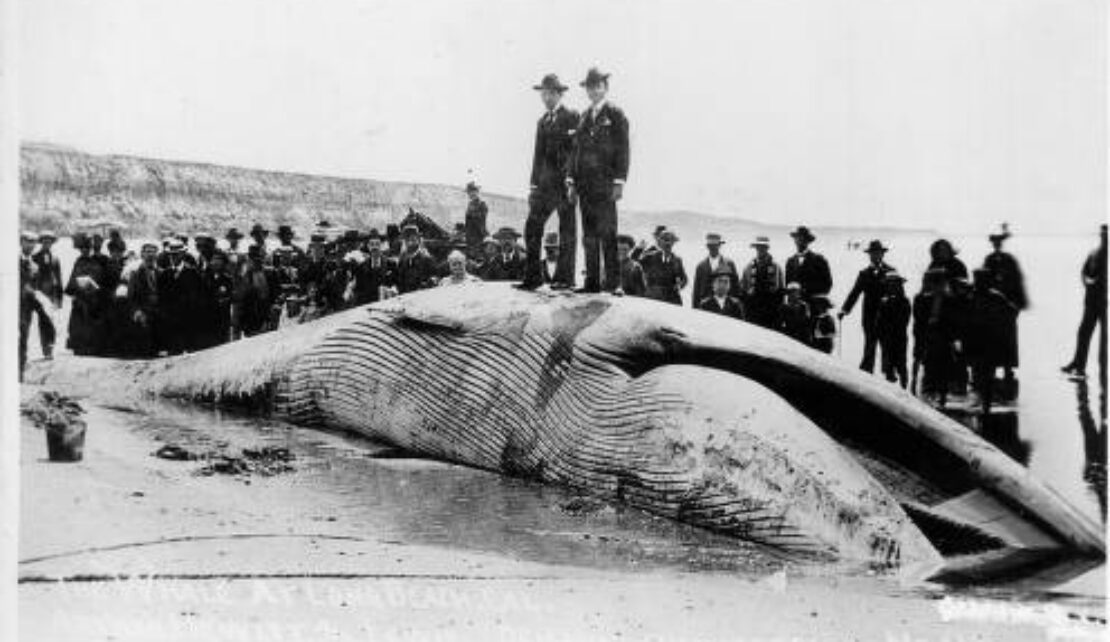 Minnie the Whale was dragged up to the strand in Long Beach in 1897 to become the city’s first major tourist attraction. Photo courtesy Long Beach Public Library.

You have to remember that it didn’t take much to draw a crowd at the end of the 19th century, before Disneyland, before the Pike. Before TV. Before, even, radio. So the whale, which would later be dubbed Minnie, was not a big deal, it was a huge deal. The Salt Lake Railroad paid a three-figure amount ($150—almost $5,000 in 2021 dollars) to take custody of the whale and the railroad brought crowds out from Pasadena and LA to gawk at the behemoth. For that one moment, Long Beach was on the map as a tourist spot.

It wasn’t long before the whale began to decompose and the stench had a desultory effect on tourists, and that — the transition from crowd-pleasing attraction to eventually stinking up the town — is pretty much what ties together the tourist attractions of Minnie the Whale and the RMS Queen Mary.

There are plenty of ideas that have come and gone between the whale and the ship. Part of Long Beach’s rich history is our propensity for welcoming into town every ragtag traveling salesman waving around a new cockamamie idea to lure mobs of tourists to town.

In 1955, the year Disneyland opened, the city got a bit excited over an idea floated by Beth Cameron, a restaurateur from Pomona, who announced plans to build a massive “Fisherman’s Village,” a $5 million project to be built on Ocean Boulevard just west of the Belmont Pier meant to rival, if not surpass, San Francisco’s Fisherman’s Wharf. 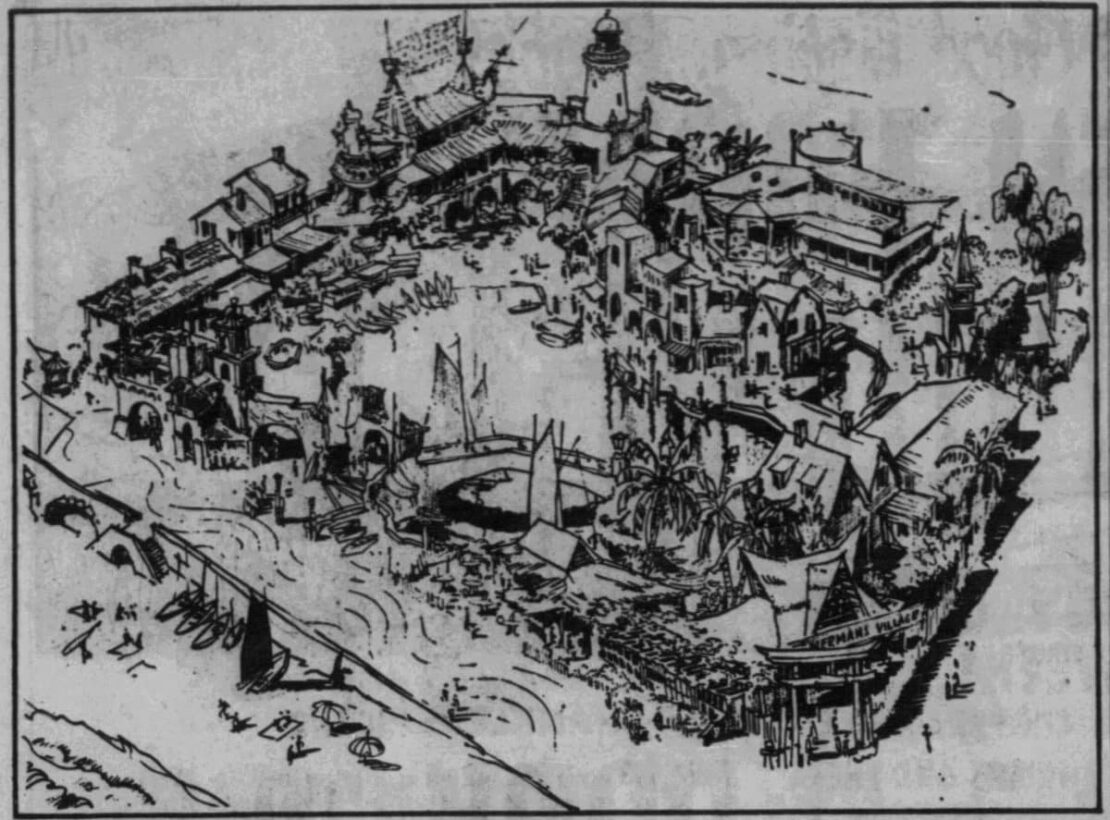 A rough sketch of the proposed Fisherman’s Village, which was to have been built near the Belmont Pier. Archive rendering.

There would be a wharf, of course, where fishing boats would be moored, as well as a village of cafes serving Chinese, Hawaiian, Italian and Spanish fare and shops selling “everything from fish hooks to flowers,” a museum housing “rare artifacts from great maritime nations,” and a revolving stage that would feature top acts from all over the world.

Papers throughout the state noted the announcement in April 1955, after which we could find no mention made again in the press about the project or Ms. Cameron.

The loftiest of ideas came in the early- and mid-1960s, just a few years before Long Beach acquired the Queen Mary. The city had plans to host a World’s Fair in 1966 or 1967-68, with the promise of attracting 50 million tourists from all over the world who would, it was predicted, dump $4 billion into the town’s hotels and businesses.

But it takes money to make money, and even as the international expo was on the brink of opening, the city discovered it would be on the hook for $24 million to build or improve roads leading to the then-new Pier J, where the fair was to be held. The city would need to impose a special tax on homeowners to pay for it, and the City Council was hesitant to hit up taxpayers one more time and the body eventually asked the city manager to withdraw from negotiations with the fair organizers.

So, no World’s Fair. On the bright side, the city put out a bunch of tokens in celebration of its Diamond Jubilee (75th anniversary), which, on the reverse side, claims it will be the host of the 1967-68 World’s Fair. Check eBay.

And, of course, there was —or, rather wasn’t—Disney Sea and Port Disney, another pie-in-the-sky idea launched in 1988 in the form of a $2.8 billion bit of Disney magic that actually could bring in tourists—Disney predicted 10 million visitors in the attraction’s first year, as well as 12,000 jobs. 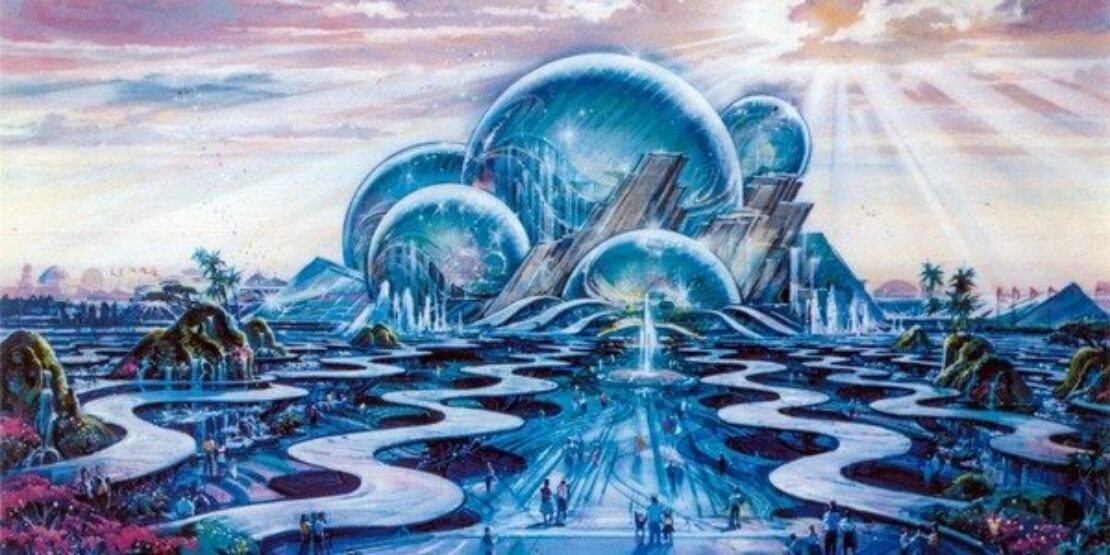 DisneySea and Port Disney was a $2.8 billion project that Disney planned to build on the site that now holds the Queen Mary and Spruce Goose Dome. The project was scrapped in December 1991.

Port Disney included a marine research center featuring top scientists along with public interaction, as well as Oceana, a futuristic aquarium, while DisneySea would offer thrill rides in a variety of “lands” such as Heroes’ Harbor, Mysterious Island and Venture Reef.

Residents’ excitement was tempered by skepticism, their dreams had been so thoroughly battered, if not by being denied a World’s Fair or a fisherman’s village, then by the continual failures and expenses of the Queen Mary.

Disney bolted for a variety of reasons, not the least of which was the high cost of building the new park while also building a Disneyland in Paris and gearing up to build WESTcot (which would become California Adventure) in Anaheim, as well as some perhaps unsurmountable regulations by the Coastal Commission and other agencies regarding building on the coastline.

Disney called it quits in December 1991.

And the dream-skepticism continued through later proposed projects, such as 2004’s Tower of Toscana, brought into play by a Texas investment firm that would create a $100 million project south of Shoreline Drive on a 3.5-acre site that would include a 600-foot-tall tower that would rival Seattle’s Space Needle, much in the same way that Fisherman’s Village would rival Fisherman’s Wharf, which as it turned out was not at all.

The tower, which was slated to be erected south of Shoreline Drive, collapsed due to a land squabble between city planners and the tower developers involving the Cheesecake Factory, which had wanted to build a restaurant at the site. In the end, the tower people went home angry about the whole affair and for whatever reason, we didn’t even end up with a Cheesecake Factory.

Long Beach has flirted forever for decades with the idea of having a monorail—the very icon of carpetbaggery, if you’re acquainted with “The Simpsons.”

A monorail, or an aerial gondola, would be the best way to transport visitors to various seaside hubs including Pine Avenue, the Aquarium of the Pacific, Shoreline Village and, most importantly, the Queen Mary.

A project known, invariably, as The Wave, touted monorails and gondolas since, at least, 1996. And 1997, 1999, 2003, 2005 and even now the idea is undergoing a feasibility study, with the project’s promoter reckoning it may not get going until 2025—and, since a robust and entertaining Queen Mary would be the linchpin of aerial transportation, its feasibility seems a bit murky, even for the most optimistic Queen Mary fans.

It will likely cost at least a half-billion dollars to make the Queen Mary a safe and gleaming tourist attraction and there’s not a long line of people or companies willing or able to take that on, though there is a long line of past operators who have failed to turn the Queen into what it was always expected to be. It’s sitting, still, in corrosive saltwater, its bones in worse shape than even Minnie the Whale’s.

And that leads to the most recent idea to attract crowds of tourists to Long Beach: Queen Mary Island, brought to you by the former operator of the ship, Urban Commons.

It was a mind-boggling $250-million proposal made in 2017 that’s still, improbably, touted on the ship’s website.

“Guests strolling down the Island’s 2,400-foot-long waterfront boardwalk will enjoy the sights and sounds of eclectic retail shops, original cafés and bars, a 200-room boutique hotel and a state-of-the-art outdoor amphitheater destined to host live performances from today’s biggest names in entertainment. For stimulating thrills that go beyond the everyday, Queen Mary Island will boast the first Urban Adventure offering in North America, an innovative multi-activity concept that will feature as many as 20 sports and adventure activities—all under one roof in a 150,000-square-foot venue.” 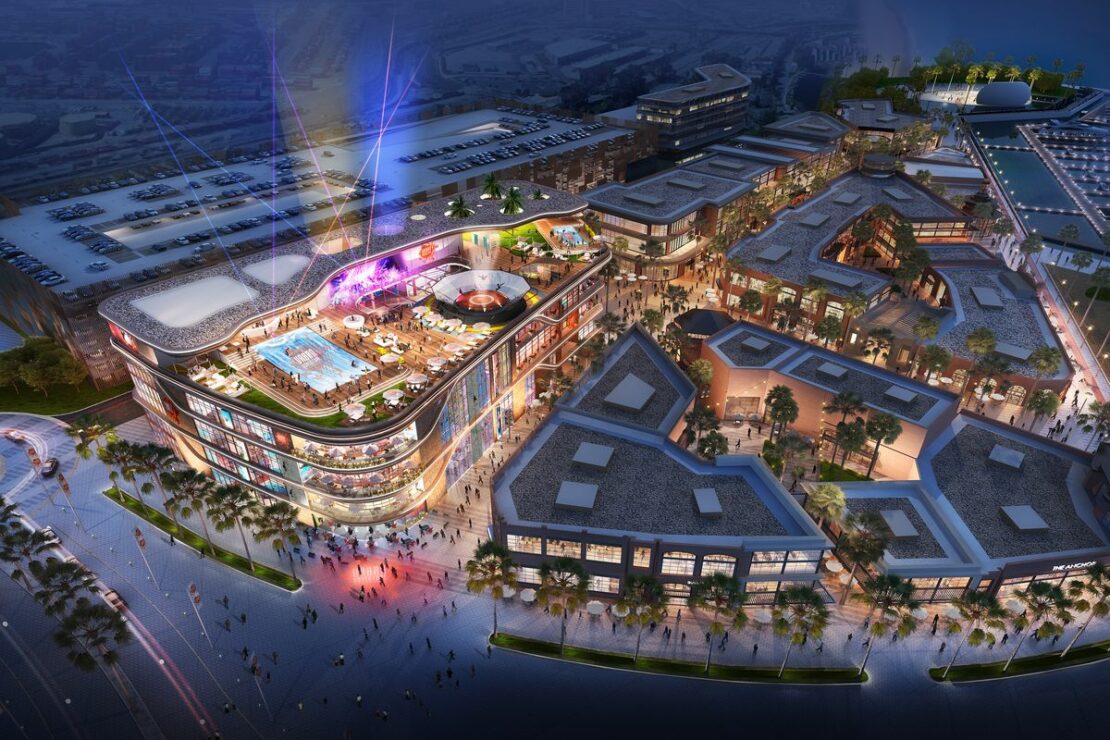 It was an idea only local politicians could embrace with giddy hope: “Queen Mary Island will invigorate our downtown core with its reimagined, urban dining and entertainment experience,” said Mayor Robert Garcia, with then-2nd District Councilwoman Jeannine Pierce chiming in: “Queen Mary Island embodies everything that is great about Long Beach. It brings the great history of Long Beach’s most iconic landmark to life while stimulating our thriving local economy. We encourage our residents to learn more about this excellent addition that is coming to our Long Beach.”

Learn this: It’s not going to happen. Give up your dreams.

Minnie the whale, who managed to entertain tourists for decades after her carcass was buried on the beach and her bones were bleached and dried in 1897.

A local barber, who dabbled in putting skeletons together, reconstructed her skeleton, which was put on display at Pacific (later Lincoln) Park, and then the Sun Parlor on the old Pine Avenue Pier, then in the basement of the Main Library (also in the park), and later still at the Colorado Lagoon. 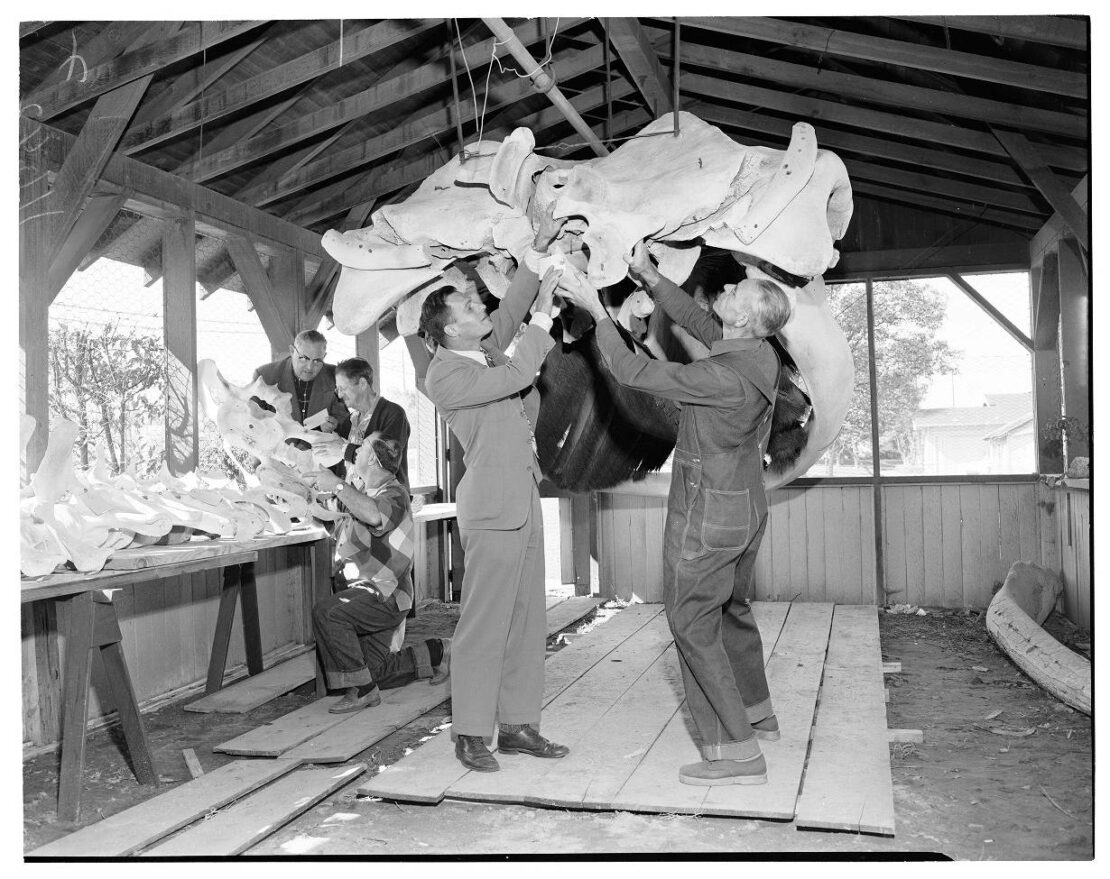 M. Avery, assistant professor of zoology at Long Beach State College, left, and Claude McFaddin of Long Beach Parks and Recreation, reassemble the skeleton of Minnie in its display structure at the Colorado Lagoon in 1954. Photo courtesy of USC digital archives.

At some point, probably in the late 1950s, the bones were buried in a lot near the airport, only to be resurrected by a couple of boys digging in the field. The bones are now in what’s probably their final resting place at the Los Angeles County Museum of Natural History’s warehouse in Vernon.

With the advent of so many forms of entertainment all competing for a tourist’s dollar, Minnie no longer was any sort of a draw. And that’s probably a lesson for the Queen Mary and the city, in its unflagging quest to bring something glitzy and shiny to town, when its natural beauty should be enough.