Opinion: What's deranged and unhinged is the campaign for District 2 • Long Beach Post News
- ADVERTISEMENT -
Help us light up the city; Add your home to the 2022 Holiday Lights map. CLICK HERE

The blundering sort of backwoods espionage that District 2 candidate Robert Fox and his campaign manager Ian Patton are accused of would make a guaranteed box-office flop. “The Gang That Couldn’t Snoop Straight.”

A trove of emails, screen shots, video and audio clips and still photographs that Fox camp spy-turned-crisis-of-conscience defector Rich Charley released this week, along with the continuing efforts of Fox fans to attack his opponent Cindy Allen on social media, has made the campaign one of the creepiest in recent Long Beach political history.

“After eight months of taking videos I just felt kind of dirty,” Charley said in an interview. “My sense became what is politics and what is taking things too far. I feel that with Ian and Fox I was doing something dirty and wrong.”

Charley’s data dump offers few bombshells, other than showing the inordinate enthusiasm the Fox campaign has regarding Allen’s long-disputed residency. Video of cars in her Fountain Valley neighborhood and in her home’s driveway (often belonging to the house’s current tenants, Michelle Dobson and her family), running license plates and vehicle identification numbers, making fake deliveries of food and beverage in an effort to capture Allen answering the door (a slightly more elaborate scheme than ding-dong-ditch, but lower-tech than putting a burning sack of dog waste on the door mat).

No spy caper would be complete without a good code name for the assignment, and “Operation Allentown,” was the name bestowed by 4th District blogger Joe Mello, who drew up a list of assignments for each operative, including Fox, Patton and Charley (who was called “Richie,” which Charley says he hates being called). The assignment sheet was accompanied by a video link to what one would assume to be the group’s theme song, Billy Joel’s “Allentown.” 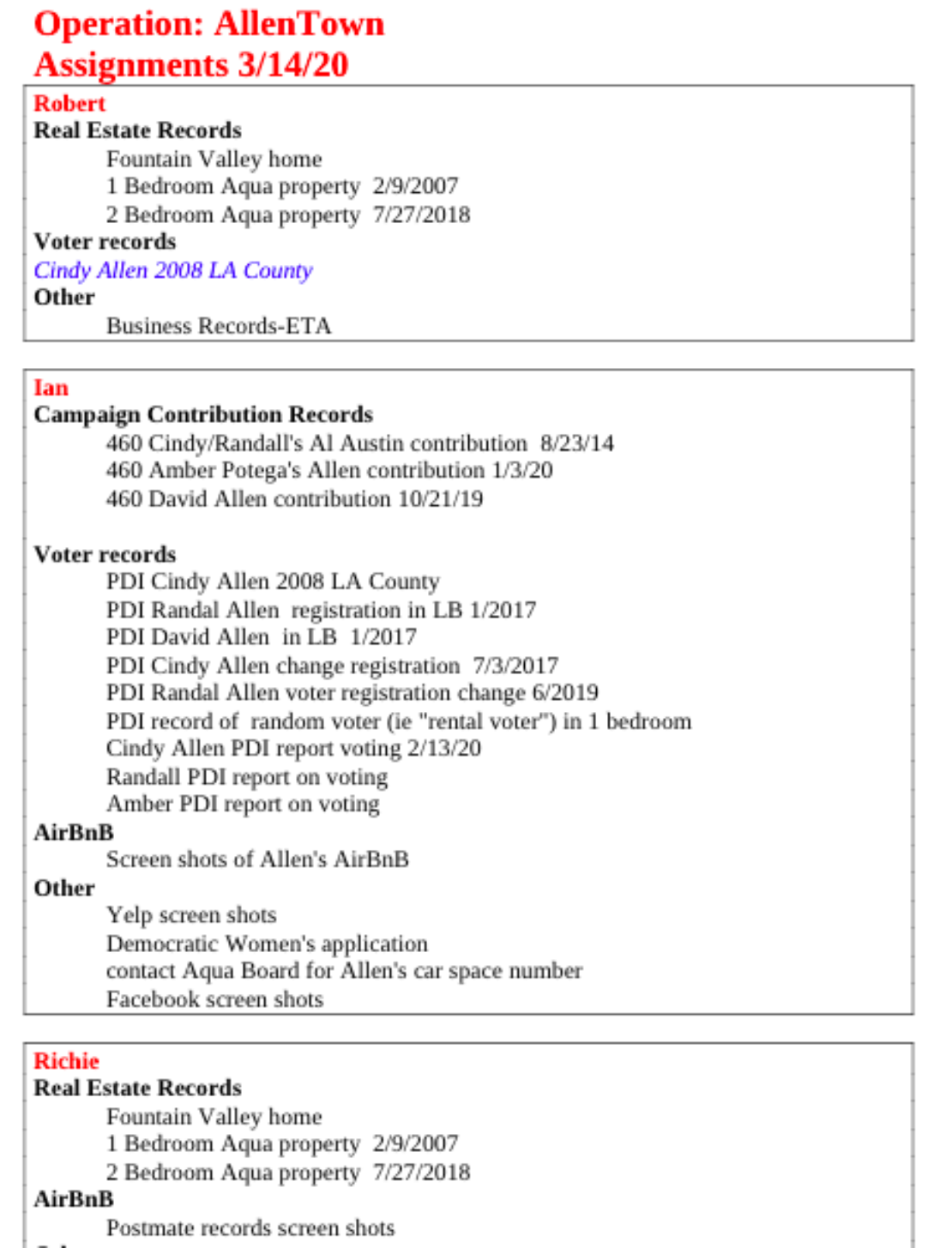 Like good “Mission: Impossible” agents, Fox and Patton have disavowed their affiliation with Charley, calling him “unhinged.” And in a press release sent out Wednesday in response to a story in the Press-Telegram, the Fox campaign further distanced itself from Charley with a barrage of statements regarding Charley’s mental health, with such phrases as his “Unabomber-esque (at least in terms of his incoherence) 26-page screed,” “highly confused, in a delusional state” and his “ever-accelerating hairbrained (sic) schemes.”

Nevertheless, emails provided by Charley have shown both Fox and Patton to be encouraging his work.

In one missive, Charley told Patton that he was going to follow Allen to Fountain Valley. Patton responded, “careful, but i love it Rich… you are the ultimate intrepid!!”

In another, Charley reported to Patton that he was surveilling Allen’s Fountain Valley home. “I am going to stay at her house all weekend working. I will catch her.”

Patton answered: “THAT WOULD BE AWESOME! Thanks for keeping up the stakeout!!!”

Charley provided screenshots of Fox himself writing: “Take good care of yourself, my dear friend….” and in another: “I hope you are safe and strong. We simply cannot afford to lose you.”

Not the sort of language one would use in trying to shoo away an unwanted, unhinged ally. (Fox denied saying this—or anything encouraging to Charley—and threatened to sue the Post “to the 10th degree” if it published a story based on the accusations.)

I will refrain, as the press release’s author should have, from any psychological diagnosis—Charley, a veteran, has admitted that he suffers from PTSD, but denies being “delusional” or “deranged”—but he was apparently being exploited for political purposes long before he defected to the Allen campaign.

To be fair, and it adds to the weirdness of the 2nd District campaign, Allen is not without challenges of her own: her initially failed sale of her advertising firm ETA, the status of which is still an avenue of attack for her opponents; her perhaps overly cozy relationship with Mayor Robert Garcia (she was an attendant in his wedding); the more than $1 million ETA made from city contracts; the ongoing debate regarding how long she’s been a Long Beach resident; the fact that she was, until recently, a registered Republican who is seeking election in a largely Democratic district; and, if it matters, a former Long Beach police officer.

In either event, there’s reason to be a bit concerned about whoever wins the District 2 seat in the Nov. 3 election.

As Charley, who lives outside the district in Long Beach said, “If I was voting for the District 2 council person, I think I’d just leave it blank.”

That sounds pretty sane to me.