To prevent myself from spiraling into self pity and bitter loneliness during my self-quarantine, I find myself trying to become more of an uncharacteristically glass-half-full type of guy. For instance, it dawned on me this morning that this experience isn’t austere solitary confinement but, rather, more like glamping on an elysian glampground in a Southern California coastal city.

I may be running low on a few things that I forgot to hoard back during those halcyon days when I was free to gambol about town tossing pallets of toilet paper and hand sanitizers into the trunk of my car, but in terms of glamping, I’m abundantly stocked and living, quite frankly, beyond my means. What a glamper I’m glamping in! As a house, mine is just sort of a C-plus, B-minus place, but it’s a five-star glamper. Who goes glamour-camping in a tent that comes equipped with a sofa, a recliner chair, a nice set of dishware and a piano? This is a Richard Branson experience! It’s so decadent that I’m starting to feel more guilty than lonesome.

Adding to the luxury is the fact that some kind and generous soul dropped off a couple of Duraflame logs, so the glamping ambiance is pretty much complete.

The closures of everything doesn’t bother a self-isolationist. Everything’s already been closed for us.

I’m sadly aware of the fact that my self-imposed isolation is different from many people’s. As I noted at the outset, I’m abundantly privileged in that regard. Money continues to pour in at such a rate that it’s starting to become a problem. I have enough food in the house to keep me alive for several weeks, even if I end up having to subsist on a casserole of bleu cheese-stuffed olives and Froot Loops. Fire in the fireplace, two slavish attack dogs, a bar in the Barn that never closes. Gas, water, electricity. A spa, for heaven’s sake! If it weren’t for the cascade of cash that I get from work, and the aging-canceling hilarity of working with my beloved colleagues, I’d never go back.

But, while we’re on the subject of loneliness, don’t ever forget about Facetime. My fellow workers at the Post, who continue to immerse themselves in potentially hazardous situations while I swim laps in the spa and sip limoncello in the lee of the banana tree, have called me on Facetime on a few occasions, which cheers me up and brings a little of the office mayhem into my life, and technowizard Dennis Dean has been on the horn with me to undo the daily calamity I wreak on the publication’s technology. (What does this button do?)

Still no crippling boredom here. For one thing, as I insist on telling everyone, I’m still working, slaving over a hot keyboard writing these chronicles, as well as helping out with the staff of The Backroom, which has yet to be curtailed out of an abundance of caution.

If you do get fidgety and feeling hemmed in, maybe a visit to the San Diego Zoo will cheer you up. We made the metaphorical trip down the 405 and 5 (remarkably little traffic, both metaphorically and literally these days) to the zoo, which is, like everything else in the world right now, closed.

But the animals, like me, are doing fine, if a bit groggy. The tigers, in particular, appeared to be mocking me (hey, look! This is you!) as I swung by their habitat at the zoo and found them sprawled out and napping on beds of straw or hay. 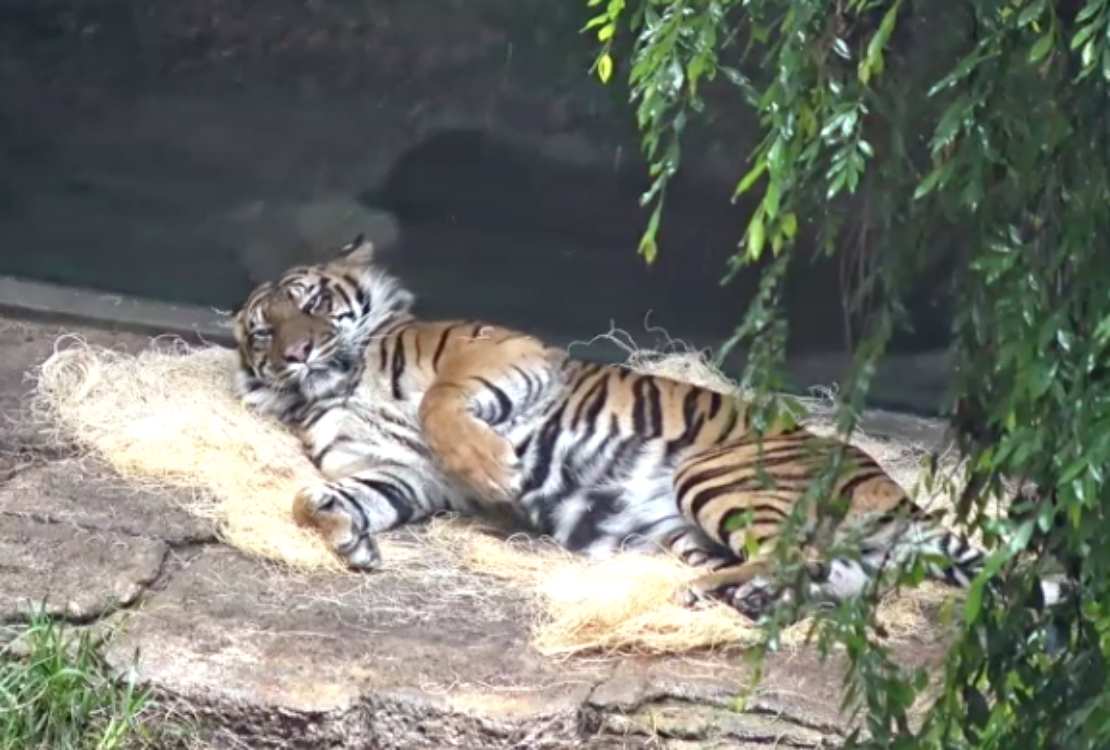 A lazy tiger at the San Diego Zoo. Screen shot from the zoo’s Tiger Cam.

You can do all this on your computer through the wonders of the live Tiger Cam, which is one of 11 cameras aimed at various attractions (animals, that is) at the zoo. There’s a Baboon Cam, an Ape Cam, and cams for elephants, polar bears, penguins, koalas, pandas, condors and giraffes. For God’s sake, don’t tell the Trump boys about this.

In fact, you can go well beyond the San Diego Zoo taking a voyeurage through all 50 states as well as cities all over the world, through the collection of cameras at the EarthCam Network, and again, these days it’s a haunting view of many places, such as New York’s generally teeming Times Square which has dwindled down to just a smattering of brave or foolish folks.

Or, stay local in your webcaming: The Aquarium of the Pacific has live feeds on a number of exhibits (penguins, sharks, sea jellies and more).

At any rate, the live cam sites give you the sensation of soaring around the country and the world, even as you’re trapped in your glamper.

That’s all for now, I’m headed off to Budapest. Meanwhile, continue to feel free to share your coping ideas, recommendations and idle thoughts by dropping us an email at [email protected], or hanging out with us @grobaty on Twitter and Facebook.