In the mailer, council candidate Tunua Thrash-Ntuk’s mouth and nose appear to have been manipulated to depict her in an unflattering and angrier way. The image in the mailer is similar to one posted on the candidate’s own campaign website, minus the alterations.

Thrash-Ntuk said she was disappointed to see the images.

“It’s an image that’s hurtful to see,” she said. “I have children, and when they saw that in the mail they asked who that is.”

Councilman Rex Richardson, a staunch supporter of Thrash-Ntuk’s campaign, took to social media to denounce the published mailers. Thrash-Ntuk said her campaign is not currently seeking an investigation into the mailers for potential foul play.

“It’s outrageous,” she said. “Voters have called me, disappointed that something like this is out there.” 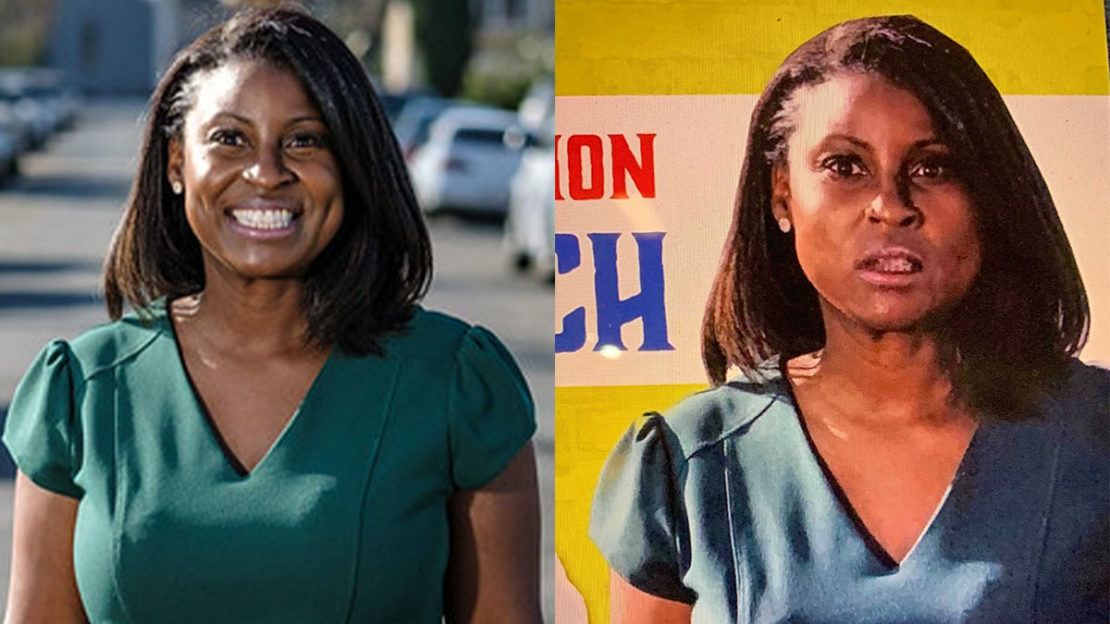 Mailers sent to Long Beach voters seem to show a manipulated image of 8th District Council candidate Tunua Thrash-Ntuk (right). The picture on the left is from Thrash-Ntuk’s campaign webpage.

State election code bars campaign committees from publishing “material that contains a picture or photograph of a person or persons into which the image of a candidate for public office is superimposed.”

But Jason Whitehead, associate professor of political science at Cal State Long Beach, said that based on the language of the statute, it was not clear if this was in violation of that code.

“Under the language it’s not clear if that’s what they did,” he said. “There are perhaps ways to edit an image without superimposing. There is wiggle room to say it wasn’t actual malice—it’s certainly unethical; I wouldn’t support it.”

Austin told the Post that he was not aware of the mailers nor would he condone distorting his opponent’s images.

“Unfortunately, there is a lot of ugliness in electoral politics today,” he said.

Austin has been targeted with unfavorable depictions of himself as well. Following a vote he made two years ago concerning panic buttons at hotels, fliers were distributed depicting Austin, who is Black, as a black demon with red eyes and white fangs.

The committee that sent the mailers showing Thrash-Ntuk has raised thousands of dollars in support of Austin, with contributions coming from some prominent public figures including John Molina, who last made a donation of $7,500 toward the PAC in February, before the primary election.

Molina told the Post that he disagreed with the committee’s decision to publish the mailer.

“I think this is wrong—I don’t know if my money went to this,” he said. “When you donate, sometimes these PACs take an approach you don’t agree with.”

Editor’s note: John Molina is a partner with Pacific6, the parent company of the Long Beach Post. Molina is not involved in the editorial operations or coverage decisions of the Post.