A father and his 3-year-old daughter died after the driver of a pickup truck crashed into their studio apartment in North Long Beach before fleeing on foot Tuesday night, police say.

Police responded around 10 p.m. to the 6600 block of North Rose Avenue after a report of a vehicle crashing into a building, the LBPD said. When officers got to the scene, they found a 2014 Dodge Ram pickup truck crashed into an apartment building, which had multiple people inside.

Officers and neighbors provided aid to the victims until Long Beach fire personnel arrived. The father, 42, was pronounced dead at the scene while his daughter was transported to a nearby hospital where she succumbed to her injuries, police said.

A preliminary investigation revealed that the driver of the pickup truck was speeding northbound on Rose Avenue when he swerved off the road and crashed into the building, police said.

Police describe the driver as a man in his 20s. The identity of the victims has not been released as authorities work to notify the next of kin.

Car parts, broken glass and concrete rubble still littered the area the morning after the crash. A 10-foot-tall piece of plywood covered damaged walls on both sides of the hole left by the truck. 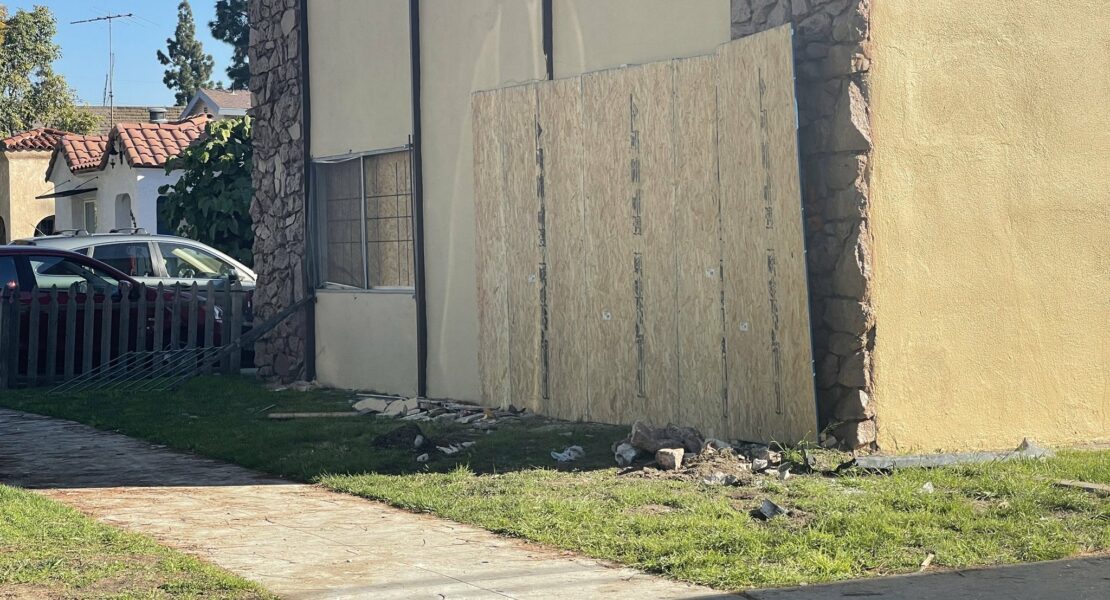 The boarded-up wall of an apartment where a truck crashed, killing two people inside on Tuesday, March 1, 2022. Photo by Fernando Haro.

The neighborhood was quiet, aside from the handful of news vans that lined the street. But neighbors said they can’t forget the blood-curdling sound of a mother screaming for her daughter after the pickup truck struck her inside her home.

“I cried,” said 52-year-old Maria Maldonado who lives nearby and saw the aftermath. “They were innocent people.”

Eduardo Caballero, 29, is a resident of the apartment complex where the driver of the pickup truck crashed. He was one of the neighbors who came out to help the victims immediately after. He said it was difficult to witness such a tragic scene.

Caballero was in his car, a few feet from the collision when he heard an engine rev three times, followed by a crash. It looked like the truck had come from the bar on the corner of the street, he added.

A bar worker who witnessed the scene last night declined to comment on the incident.

Police urge anyone with information on the crash to call detectives at 562-570-7355.

‘They just said an active shooter was inside the bar’; 2 dead after police confront gunman