According to a search warrant filed in Long Beach Superior Court, the investigation was the result of numerous community tips that began on June 8 when the department received a call about a possible drug sale involving two allegedly intoxicated suspects in the 3300 block of San Anseline Avenue, which is near Marshall Middle School. The two suspects fled the scene before officers arrived, according to the search warrant, but over the next few weeks, the LBPD received more calls from concerned neighbors, who complained about public drug use, fights breaking out and needles in their yards, court records show.

On June 30, police say they arrived at the East Long Beach home to conduct surveillance when they saw a man, who was identified as 51-year-old Ryan Munson, coming out of the house and getting into a black SUV. Police say Munson committed several traffic violations, including failing to signal prior to making a turn, and was pulled over. Munson, who was on parole for vehicle theft, told police that he was on his way to a local restaurant where a woman was waiting for him to deliver $25 worth of fentanyl, court records show.

Munson also identified himself as a “runner” who delivered fentanyl for his supplier, Joseph Navetta, according to court records. Police say Navetta also has several drug-related cases in Oklahoma. Court records show that Navetta was previously arrested in October after police searched his home in the 3100 block of Bellower Boulevard and found over 50 grams of methamphetamine, 30 grams of fentanyl, scales, drug paraphernalia and packaging equipment.

Police say officers eventually developed enough probable cause to obtain a search warrant for both homes, which are less than a mile apart.

Upon serving the first search warrant at a home in 3300 the block of San Anseline, officers seized at least nine guns, including a 5.56 caliber AR-15 rifle and a 12-gauge shotgun, and arrested Burhmann, court records show. Narcotics and paraphernalia were also discovered, police say. During the search of the second home in the 3100 block of Bellflower Boulevard, which Navetta lists as his residence, officers seized several ounces of narcotics, including fentanyl, court records show. 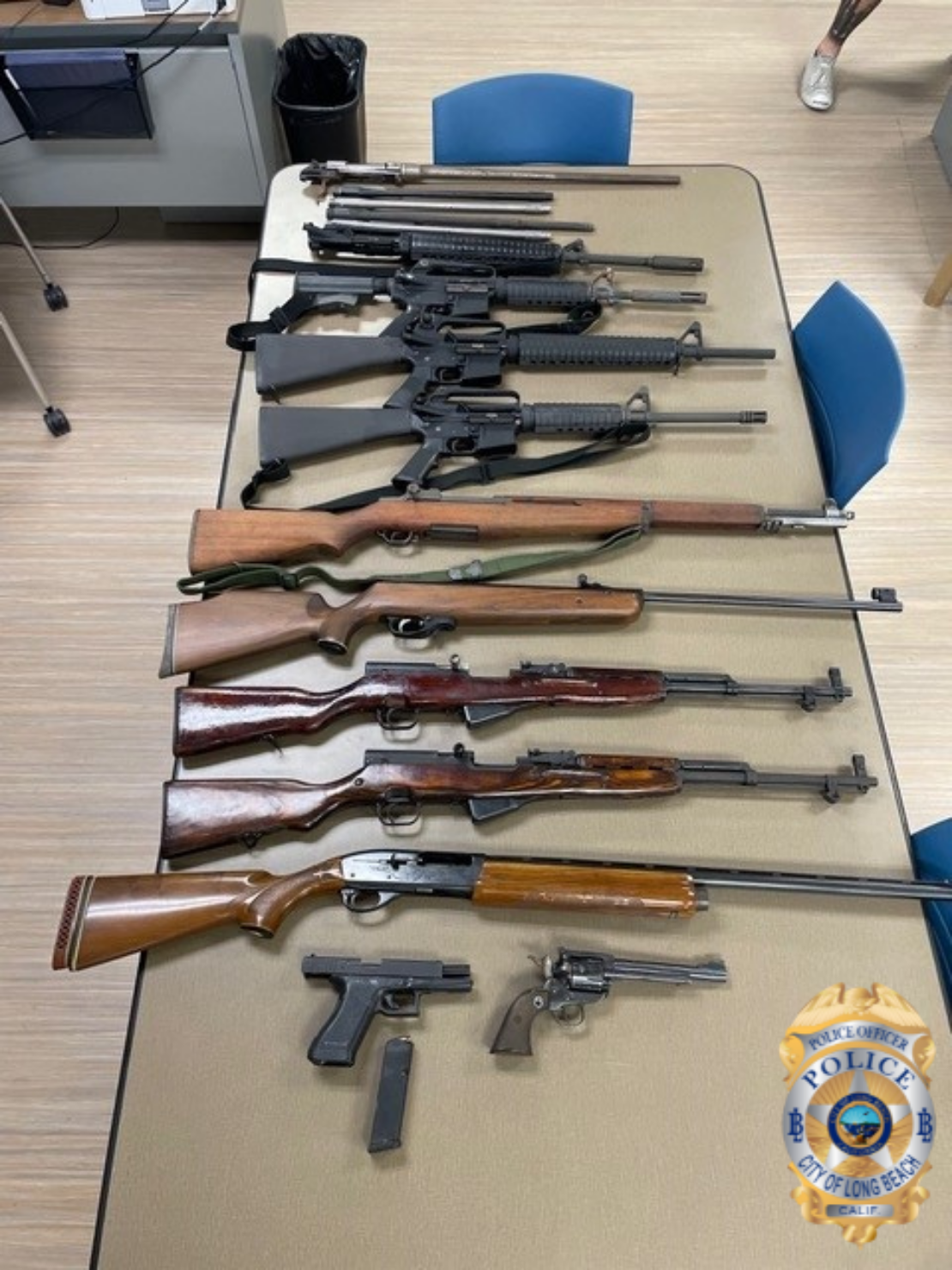 Several guns were seized by LBPD officers after serving a search warrant at an East Long Beach home on July 7. Photo courtesy of the LBPD.

Navetta, who is on parole, was detained at the scene, police said. Though he was not booked and later released “since there wasn’t sufficient evidence linking him to the criminal activities at the time,” LBPD spokesperson Richard Mejia said.

The investigation is ongoing, police said.

Editor’s note: An earlier version of this article omitted the “San” in “San Anseline Avenue.”