Coronavirus is shutting some doors in Belmont Shore, but it’s also opening up windows to serve as community message boards for children’s art, words and symbols of hope.

At Fern’s Garden gift boutique, shopkeepers are turning an empty storefront window into a rainbow of colorful drawings and sidewalk chalk photographs created by local kids. Among the first images on display are penguins, gnomes and dogs mixed with toilet paper rolls and messages of “be happy,” “we’re in this together” and “sharing is cool.”

Although her store is the first on Second Street to display children’s art, owner Fern Solomon is partnering with the Belmont Shore Business Association to get the word out and help other closed non-essential retailers create displays for their own vacant windows while they wait for word that it’s safe to reopen.

“There are all these store windows in America right now that are doing nothing,” Solomon said. “My vision is for this to be a national movement in all the windows all over the country.” 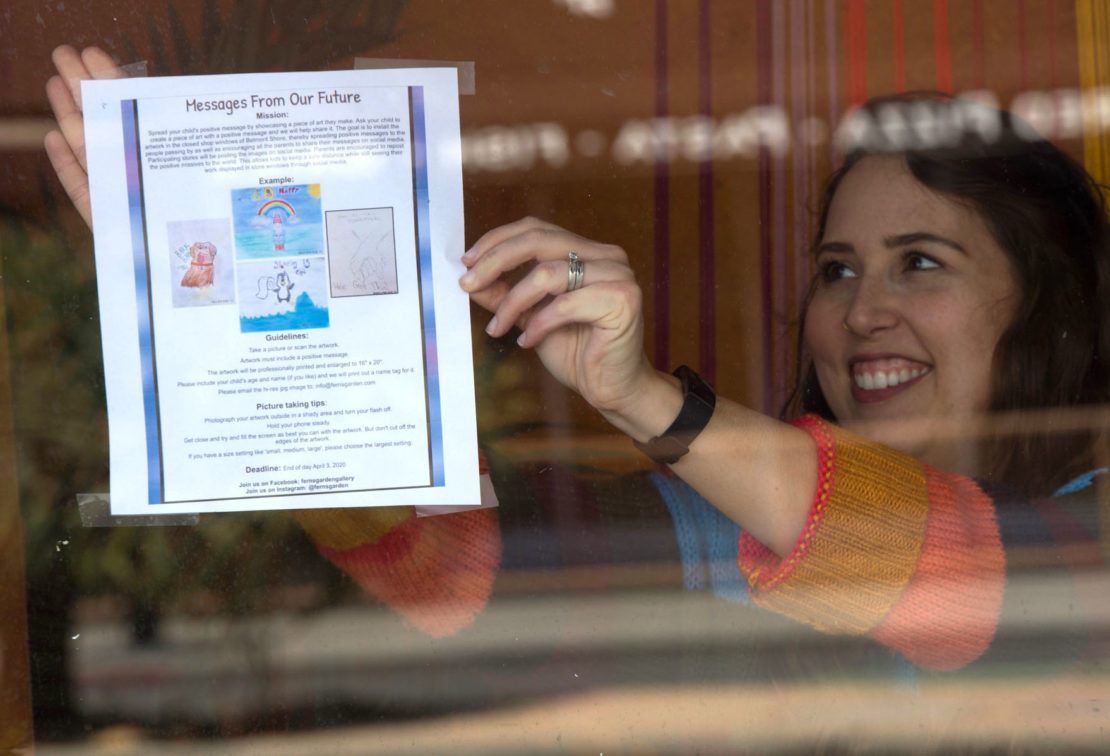 Fern’s Garden manager Ashley LeDuc, posts a poster as she sets up a display of art from local children in he store’s window in Belmont Shore. The store will share the art that local children create in order spread positive messages. Photo by Stephen Carr.

Solomon was inspired to act when longtime store manager Ashley LeDuc had the idea of brightening up the window display. Seeing social media posts of neighborhood efforts to put candles, hearts, rainbows and teddy bears in windows, Solomon realized Fern’s Garden’s empty store window could be given a higher purpose.

“My dad, who is 94, was a school psychologist for Long Beach Unified, and he taught us that there’s a positive solution to every situation; you just have to find it. He taught me how to turn something negative into something positive,” Solomon said, noting that she had to find a silver lining to the heartbreak she’s felt about temporarily closing Fern’s Garden and laying off the part-time staff.

Fern’s Garden has been in business for more than two decades, and the owner said she hopes to rehire those workers and reopen the store, running the business long into the future. Already, the boutique has survived a recession and is pushing through the retail apocalypse, so Solomon said she knows how to get knocked down and get back up again.

In the meantime, with nothing for Solomon or her two full time staffers to do, as there are no customers and no merchandise to order, refocusing their efforts on the “Messages For Our Future” window display gives them a sense of purpose and accomplishment, she said. 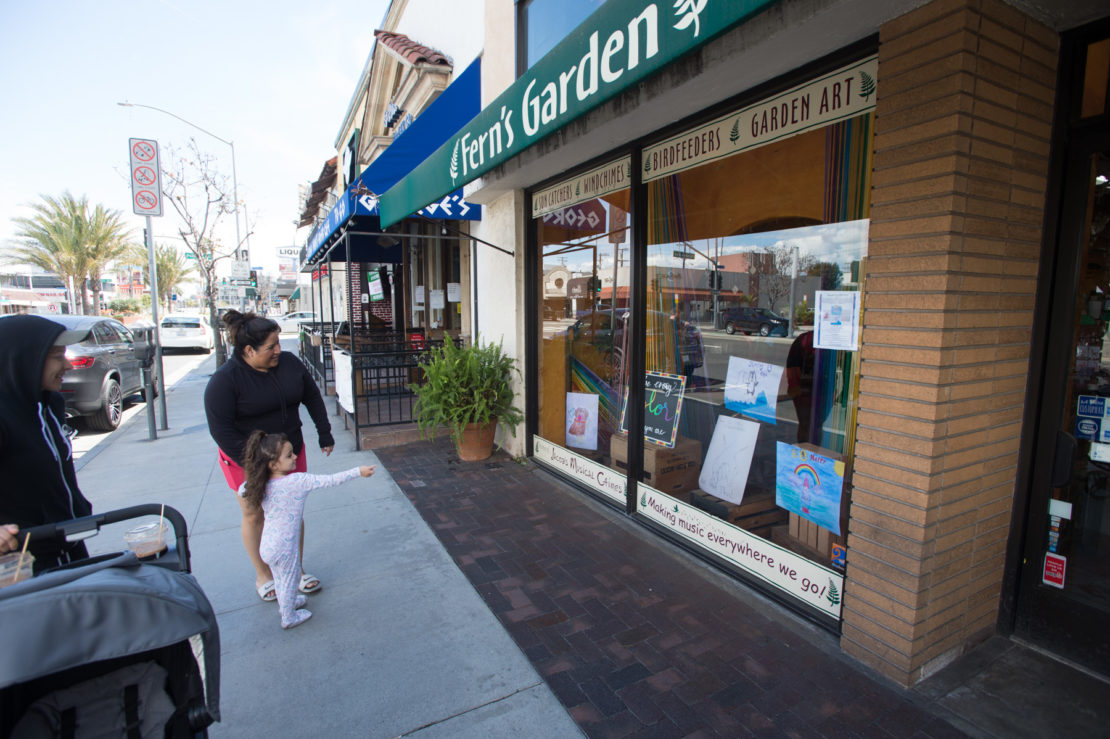 Belmont Shore Business Association Executive Director Dede Rossi, who immediately supported the idea as a campaign for Second Street retailers, said sharing positive works of art gives shopkeepers a way to engage with the community at a time when that’s difficult to do.

She also said it’s wonderful news for parents looking for ways to keep children busy while schools are closed.

“Parents need something for their kids to do right now, so get them out there doing some chalk art and take a photo and send it over and we’ll hang it up and share it,” Rossi said.

Solomon, whose granddaughter created art for the window, said the campaign sends a message to children that they are part of something bigger, that their art and words can be shared and have meaning all over the world.

“This message from our future is a way to let adults know what the children are thinking and feeling. And they’re thinking, ‘don’t worry,’ ‘we’re all in this together,’ ‘be safe,’” Solomon said. 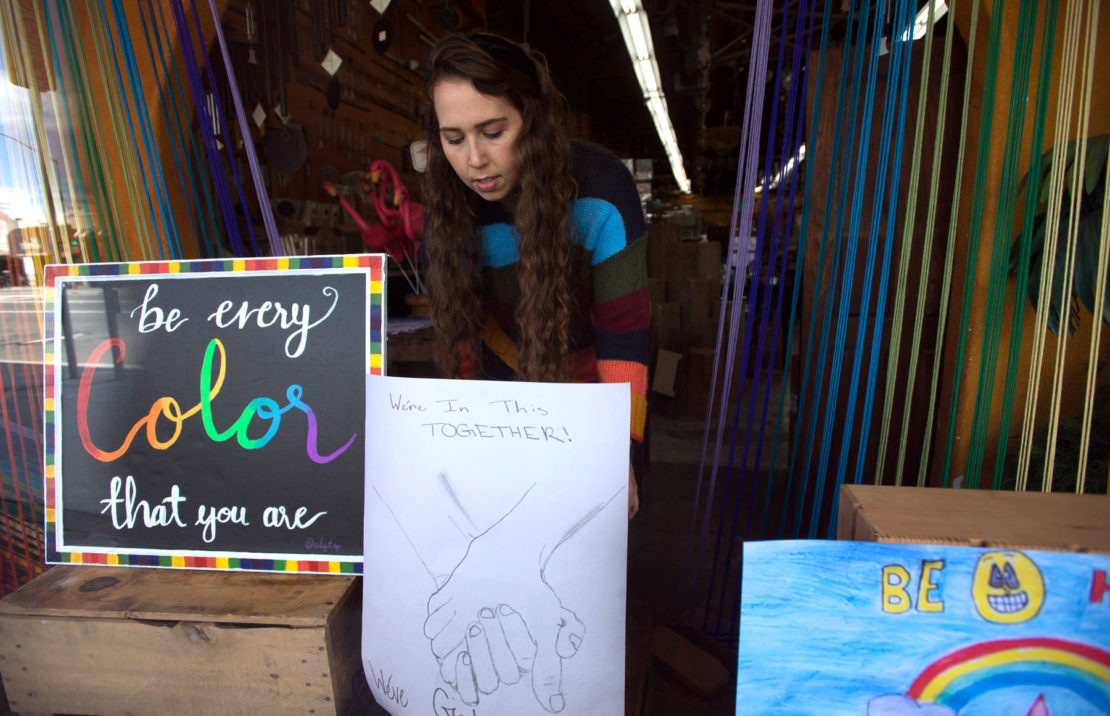 Participating stores will share the images in their windows and on social media, so Rossi said people don’t have to be physically outside the stores to enjoy them if they’re self-isolating at home.

The BSBA is covering the printing costs for posters of the artwork, which is being collected and organized by the staff at Fern’s Garden.

Fern’s Garden, which also has a store in Berkeley, is part of and organization called Craft Retailers and Artists for Tomorrow (CRAFT), which also will be sharing Solomon’s “Messages for our Future” project with its members and encouraging participation nationwide.

“There’s nothing for us (retailers) to do because everything is on hold, but this is something we can do. I have to have something positive for the future, so I’m on this mission now.”