Downtown Long Beach could see a dramatic change to its pedestrian infrastructure in the coming years as the city works to make biking and walking around the area safer.

The city is starting the environmental planning process for a “Walkable Corners” project that could install up to 190 curb extensions and pedestrian refuge islands in the Downtown area.

The City Council is expected to approve the first wave of grant money Tuesday night to pay for an initial environmental review and a public outreach element led by the city’s health department, which would teach the public how to use the new infrastructure once it’s built.

Extending corners will both shorten the distance pedestrians have to cover to cross a street and better bring them into view of drivers who currently have to deal with parked cars when looking for people standing on corners.

The physical barriers, known as refuge islands, will provide a protected place in the middle of the street, similar to the city’s train stations, for pedestrians unable to fully cross the street to wait until traffic clears. The environmental review process could be finished this year with the city moving on to design and engineering in early 2023.

The affected areas would be between Magnolia Avenue and Alamitos Avenue and Seventh Street and First Street. The project is being funded mostly through a grant from CalTrans and is expected to be completed by 2025, according to Public Works spokesperson Joy Contreras.

The project is expected to include about 171 curb extensions and 19 pedestrian islands, but those totals could change depending on the early planning process, Contreras said. 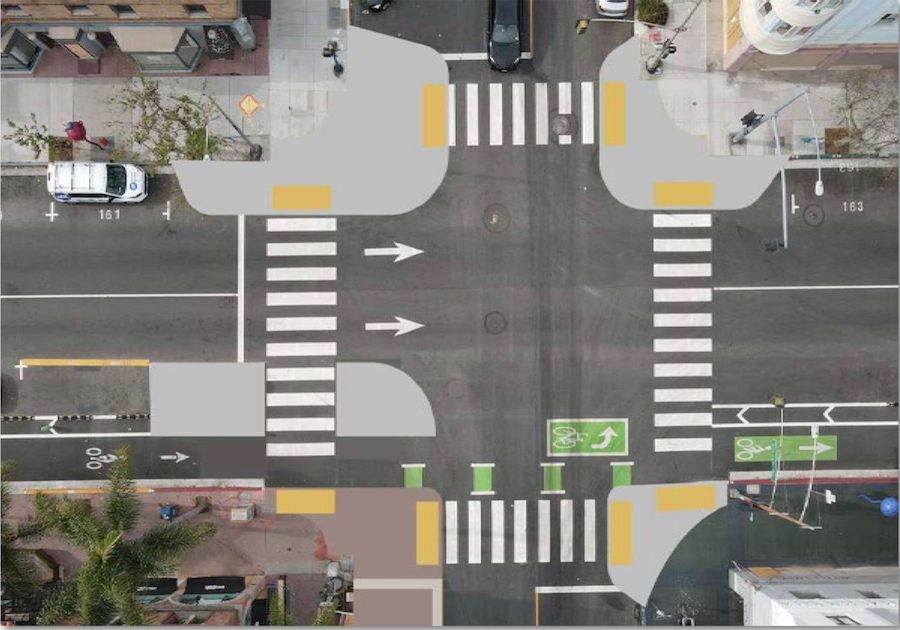 A screenshot from a Public Works presentation to the City Council in February showing what curb extensions could look like in Downtown.

The $8.7 million project was approved through the CalTrans Active Transportation Program, which was created through a 2017 state law aimed at increasing other modes of transportation like walking and biking. The grant will come in waves and cover 90% of the project, leaving the city to cover about $870,000.

The islands and curb extensions are not expected to reduce road widths or take away parking spaces, Contreras said in an email. However, the curb extensions are designed to make pedestrians more visible to drivers and force cars to make slower turns.

Contreras said the streets that could see changes were identified in the city’s “high injury network” in its Safe Streets Action Plan and include Magnolia, Pacific and Atlantic avenues, Sixth Street, Seventh Street and Long Beach Boulevard.

Two other active transportation projects in Long Beach were approved by CalTrans and could bring millions more in state funding to the city to improve its bicycle network.

An $8.3 million Pacific Avenue cycle track that would extend from Ocean Boulevard to Pacific Coast Highway would install a separated bikeway and bus islands that would allow for more efficient bus rides because drivers wouldn’t have to pull over to pick up passengers.

A $4.1 million project that could turn the middle of Pine Avenue into a bike boulevard to promote multi-modal transportation from Downtown to the Metro A Line Willow Station was also approved. The project would run on Pine Avenue from Eighth Street for about three miles before reaching the Willow Station.

Both projects are also expected to be completed by 2025 and could be considered by the City Council in the coming months.

‘We want to feel safe’: Washington residents call for action after collision at intersection