A 20-year-old vision of connecting two of Downtown Long Beach’s biggest parks remains on hold as the city seeks more funding, leaving residents to deal with noisy trucks operating on a parcel of land earmarked for the park’s expansion.

The Drake-Chavez Master Plan was approved by the City Council in 2009, but funding has not materialized for the multiple parts of the project that could eventually link Drake Park, which sits between Anaheim and Seventh Streets, with Cesar Chavez and Santa Cruz Parks that end at Ocean Boulevard.

The area is considered to be critically underserved according to a 2016 parks needs assessment completed by the Los Angeles County Department of Parks and Recreation.

Park equity has been a contentious topic in the city for years, but city officials have pointed to the cost of acquiring land and developing it into park space as a sometimes insurmountable barrier to closing the equity gap.

It could take $10 million to fully implement the plan, and the city is preparing to lobby the state Legislature for that money, listing the Drake-Chavez project as one of its priority projects that it hopes its local representatives can secure funding for this year.

In the meantime, local residents in the Willmore neighborhood say they’re concerned that loud city vehicles are “moving into” a yard meant for park space, but the Long Beach Department of Public Works said the activity there is temporary.

The yard, which is situated behind a cluster of homes at 970 W. Chester Place, continues to serve existing uses by the Metro Transportation Authority, public works and the city’s Parks, Recreation and Marine Department, public works spokeswoman Joy Contreras said in an email.

The noise has impacted quality of life, residents say.

“You’re having a working yard that bumps up against a bunch of residential homes and all of the vehicles that these city vehicles have back-up horns,” Jim Danno, a Willmore resident, said. “People, in essence, are living in their homes at 6 in the morning, are gonna be getting interrupted sleep.”

But public works said that temporary activities in the yard “will eventually be replaced with parks, open space, and recreational uses consistent with the community’s vision as well as any funding sources available,” Contreras said. 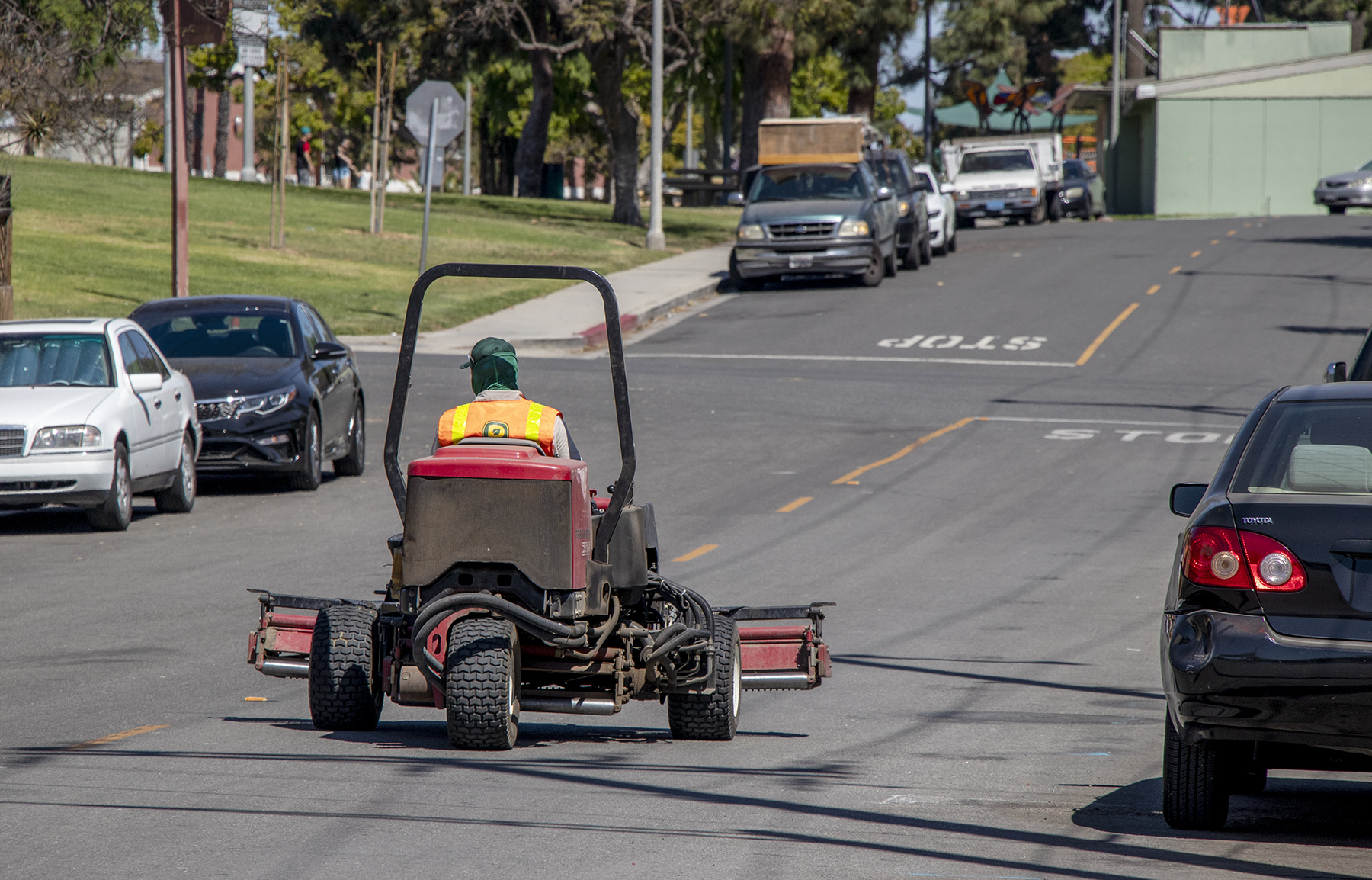 A rumbling mower vehicle exits a yard at 970 W. Chester Place in the Willmore neighborhood in Long Beach on Thursday, March 17, 2022. Photo by Crystal Niebla.

Beyond the noise from the yard, Danno said he’s concerned that the space that’s slated to become park space has been delayed for too long. The community process to create the Drake Chavez Master Plan began in the early 2000s, including design ideas for the park space, according to city documents.

The city applied for an $8.5 million grant last March that could have helped it complete the project but was not approved. Now, the Drake-Chavez park is among a host of funding requests it will make to the state and federal government.

In total, Long Beach identified $100 million in park funding requests in a memo made public earlier this month.

Other projects that will affect Drake and Chavez Parks, like replacing the Shoemaker Bridge, which currently creates a barrier between Chavez Park and the truck yard, and the 710-widening project, are also on hold.

The Shoemaker Bridge was included in the city’s list of priority projects, and officials are seeking $350 million from the state and federal governments. The LA Metro board of directors opted to pause pursuit of widening the freeway in May 2021 after federal regulators refused to accept its environmental assessments that it would reduce pollution.

The 710 separates part of Chavez Park from the portion that’s usable by the public. Unifying the park was one of the early-action projects agreed to by the board when it approved the 710 project in 2018. 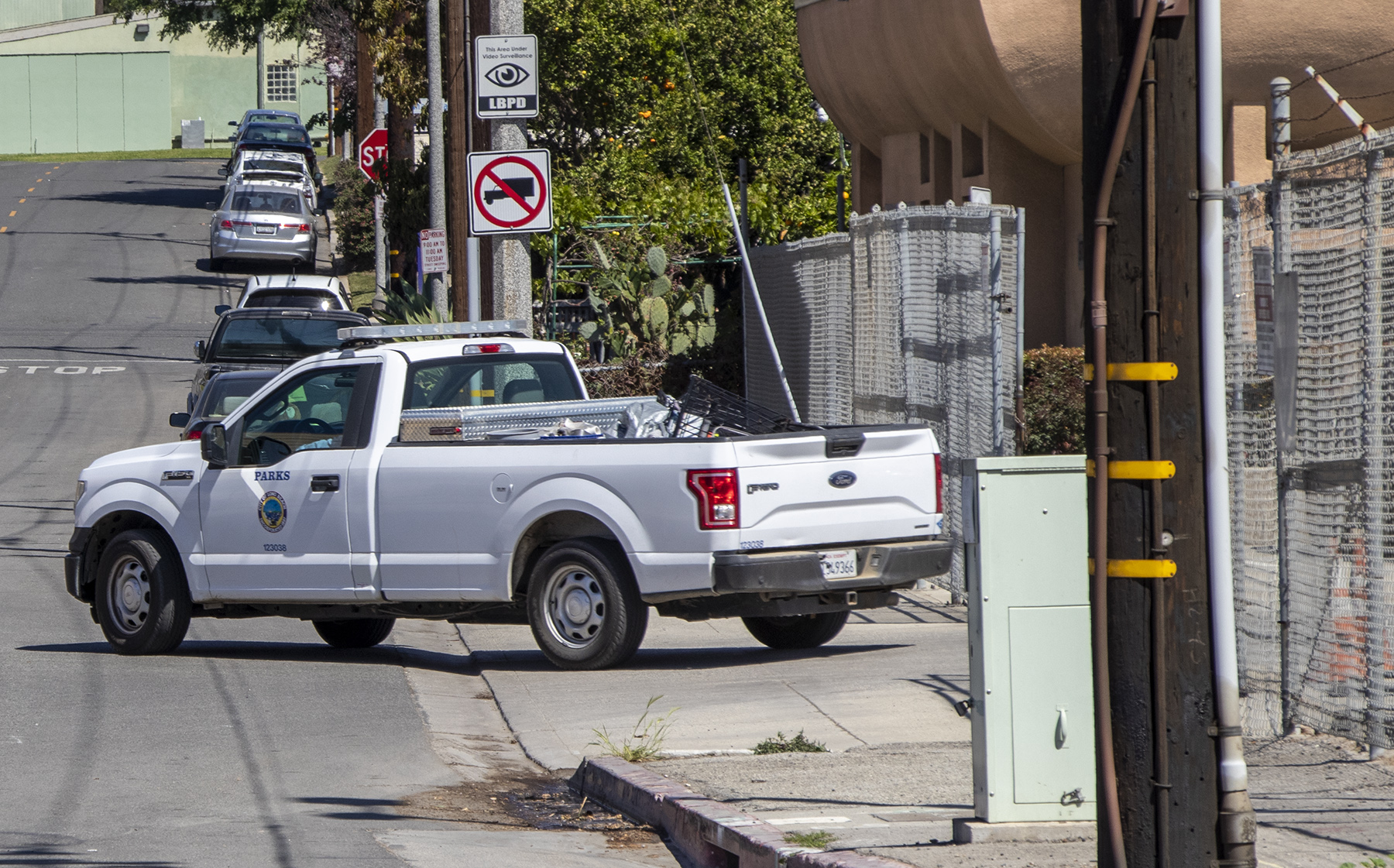 A city truck exits the yard at 970 W. Chester Place in the Willmore neighborhood in Long Beach on Thursday, March 17, 2022. Photo by Crystal Niebla.

Some fear that the yard now being used as a service hub for city vehicles might contribute to the delay of the yard conversion into park space.

“Until there [are] sufficient funds for this project, ‘temporary’ could mean a decade,” said Mariela Salgado, a member of the Parks and Recreation Commission and a resident of the Willmore neighborhood.

While a clear timeline has not been provided, Contreras said planning for the decades-long project “is underway to redevelop the service yard into a public space.” In the meantime, Contreras said the yard would continue to be used as an area for city vehicles and to support ongoing projects in the area.

One of those projects is the LB-MUST stormwater treatment plant that was incorporated into the Drake-Chavez plan in a 2019 revision approved by the City Council. Heavy machinery is being used to grade the site for the $30 million project that will use underground pipes to capture and treat stormwater runoff that would normally be lost in the river. 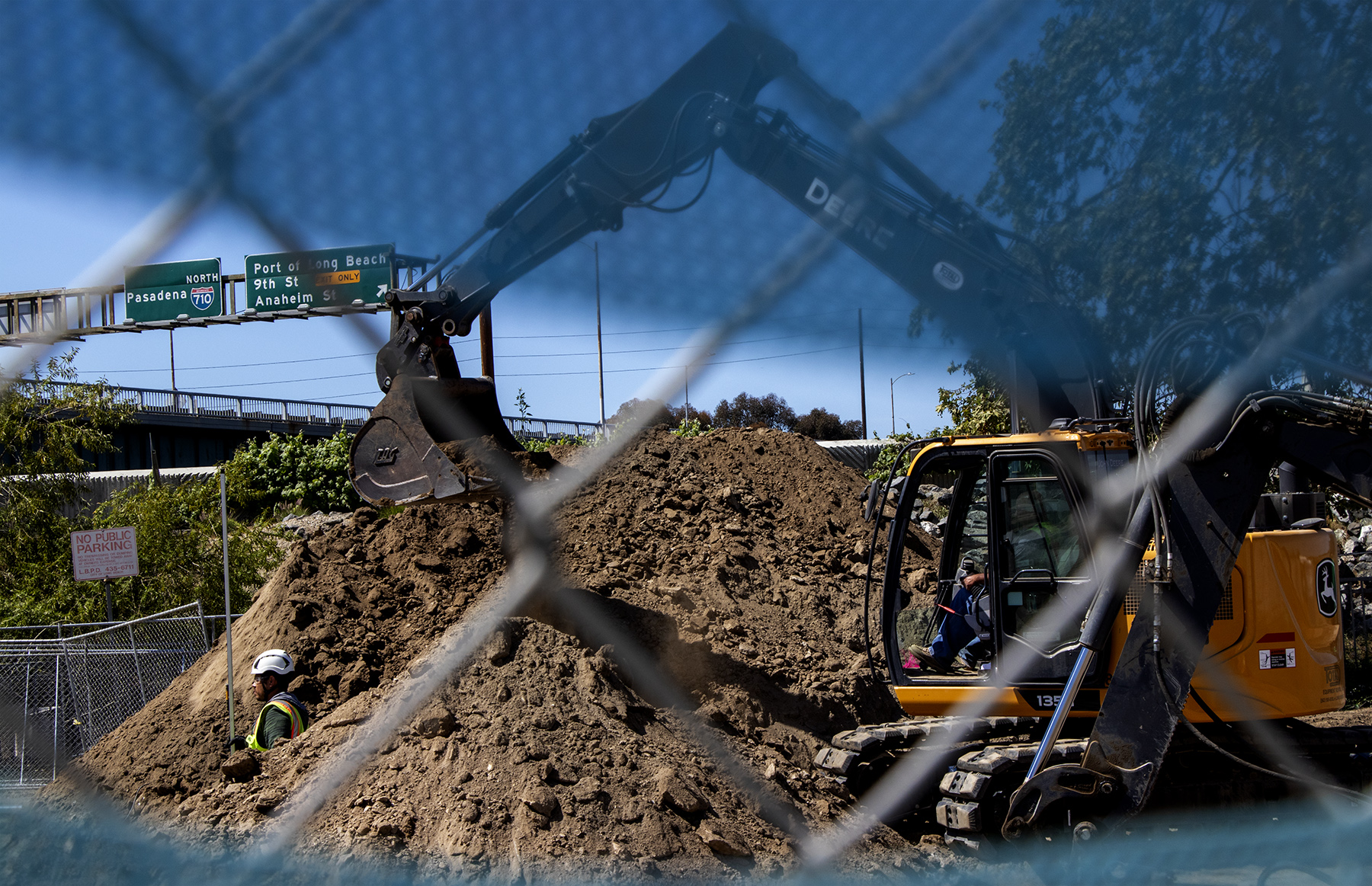 Crews work at the Long Beach Municipal Urban Stormwater Treatment Project (LB-MUST) in the Willmore neighborhood in Long Beach on Thursday, March 17, 2022. Photo by Crystal Niebla. LB-MUST is a current construction project near a nearby yard meant for park space that is being temporarily used by the Metro Transportation Authority and Long Beach departments.