On Wednesday, Feb. 17, pet groomer Abigail Gibson will pick up her clippers, dryers, blueberry-infused facial concoction, and all the little buttons and bows she adorned her furry little customers with and close the door to her salon for the last time.

Pawsitively Long Beach, located in the East Village Arts District at 254 Elm St., is Long Beach’s latest small-business casualty, pushed out of existence by a combination of reasons.

Gibson, who began her professional grooming career in Long Beach eight years ago, at Soggy Dog Pet Grooming, opened Pawsitively Long Beach in 2015, taking along a good number of her appreciative clients.

“These are my core, my OGs [original guys],” Gibson said. 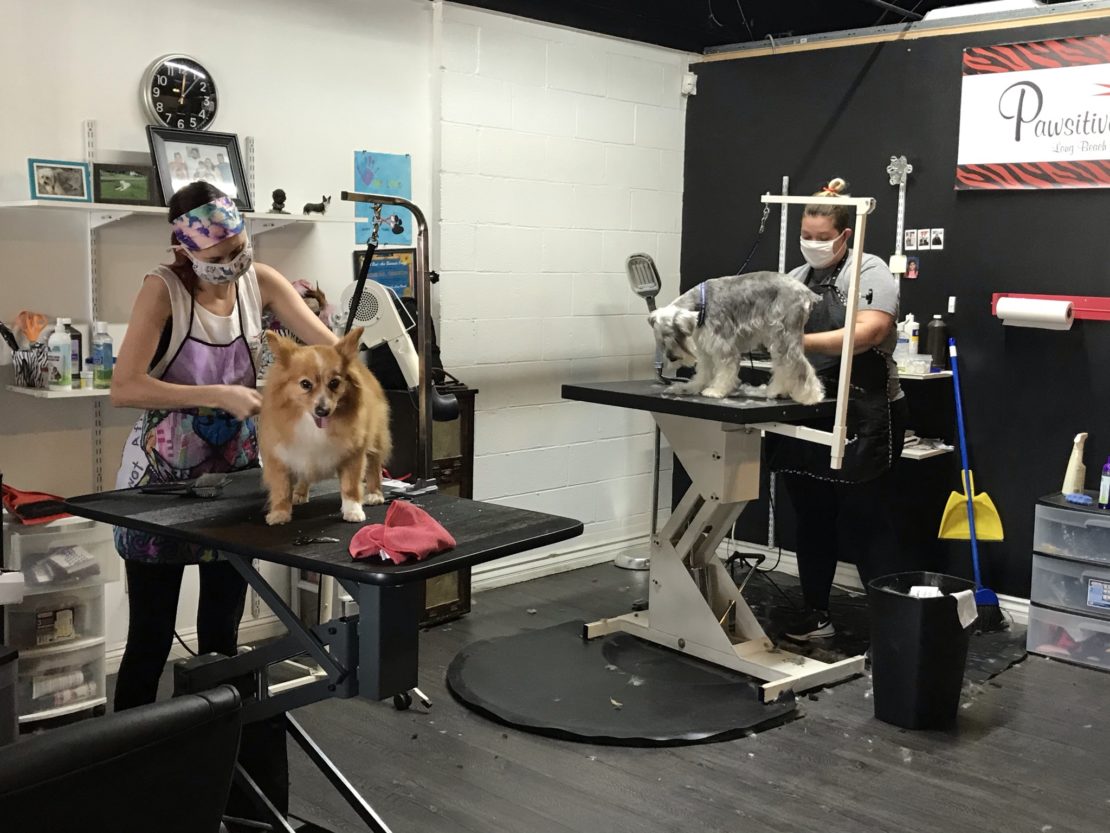 Gibson is grooming Carlo, the gray Sam Donaldson lookalike on the right, and honored OG Assistant Jordan Danel is treating Brittany, a lovely redhead, to a final brushing and fluff. Photo by Kate Karp.

Pawsitively Long Beach’s quality of service and personal treatment of her clients’ pets won the salon a number of awards from media outlets, including the Long Beach Post. 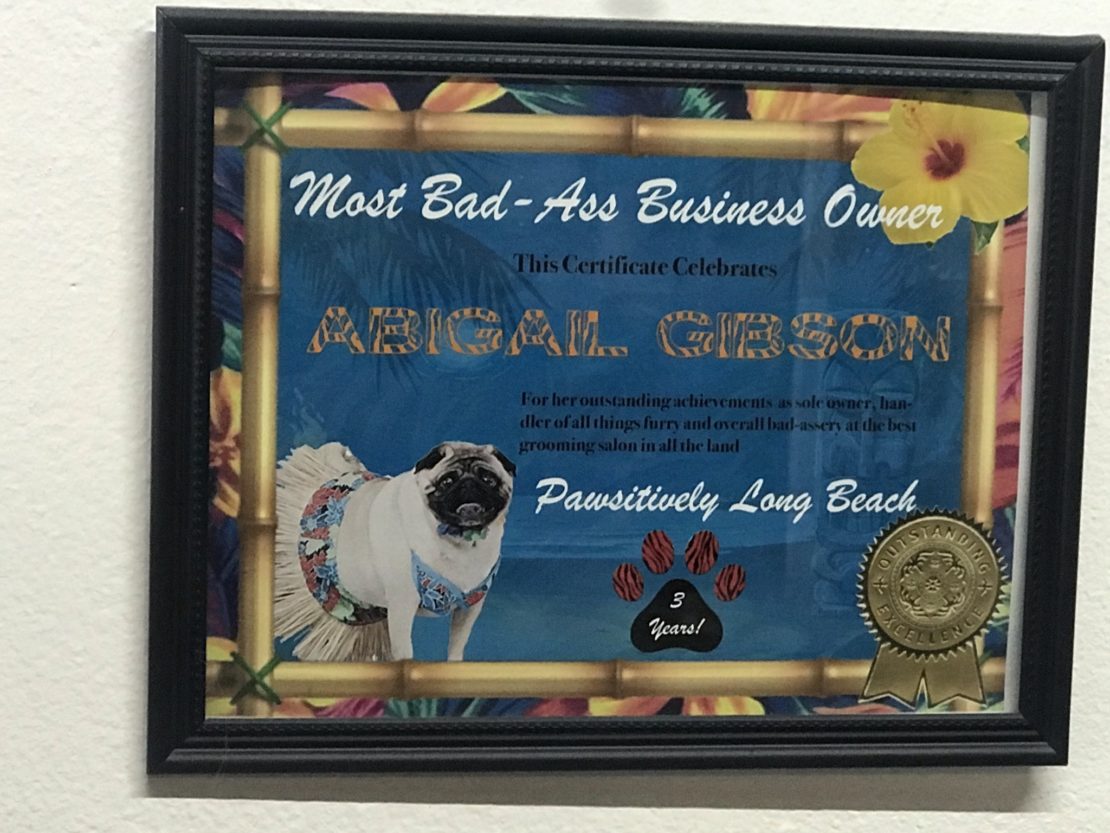 “I have a whole stack—they were on the wall over there, my hall of fame, I called it,” Gibson said. “They’re all packed up now. This one was from my employees.” Photo by Kate Karp

Her community of loyal clients has expressed sadness and disappointment at the business’s closure but also are wishing her well.

“I have always admired Abby for opening her business at a young age and have loved being able to support them,” said Pamala Machado, whose dog, Sookie had been kept “soft and fluffy” since Pawsitively opened. “I wish Abby all the best!”

In addition to providing personal service to pets, the salon has hosted fundraisers to benefit organizations like the Animal Resource Team, a nonprofit dedicated to giving pet owners access to resources to keep their animals in their homes instead of relinquished to shelters. Pawsitively Long Beach also donated funds and barrels of dog food to a San Fernando Valley Shelter during the Woolsey Fire in 2018.

“I’m from up there—I know a lot of people that were impacted by the fire,” Gibson said. “Even my parents were affected.”

A snowball of circumstances led Gibson to close her salon. One was her parents’ health. Gibson has been commuting to work from Norco since May 2020 to care for her parents, both of whom are disabled. Her father, moreover, is terminally ill.

“I went up there [to Norco] originally to sit out quarantine with them, and then it became clear to me that they needed help,” Gibson said. “My apartment wasn’t working out for me, so I gave it up and moved there permanently.”

The pandemic, the city’s response to her concerns, and an unsatisfactory relationship with the business’s landlord added to the stress, making it intolerable for Gibson to continue working. When COVID-19 hit, the salon closed in March and remained shut until May. Once Gibson reopened, she said that she repeatedly had to close down.

“Anytime we were told to shut down, I shut down. I couldn’t take the chance of a family member getting sick, and hurting a business is not worth it, either,” she said. “And it just got harder and harder—it did a number on me.”

What your pet can and can’t do under the stay-at-home order. Is grooming an essential service?

Pawsitively’s final reopening was on Feb. 1.  Gibson, though, was on overload.

“We had just gotten open this month, and I was crying on my way to work because I didn’t want to deal with it anymore,” she said.

Gibson has no idea what she’ll be doing during the next stage of her life, but she seems to have swept aside her concerns along with the dog hair.

“This is the first time in my life I don’t know what I’ll be doing, but I’m OK with it—I know I’ll figure it out,” she said. “I can go back to school and hopefully can start homesteading and live sustainably. Norco is my stepping stone to that.”

Gibson and her partner already have chickens and a working dog, a Great Pyrenees named Lyra.

Pawsitively Long Beach will accept walk-ins until Wednesday for nail trims only. Gibson will keep the business’s Facebook page active, and she welcomes clients to come out to Norco to get their pets groomed. They’ll be more than welcome.

“The one good thing I will say is that the people of Long Beach have been nothing but supportive,” Gibson said. “They love their pets and are passionate about animals. That’s the one thing I’m most grateful for—people and their pets.”