The vice president of the Long Beach Unified School District Board of Education has indicated she’ll step back from the largely ceremonial position after fierce criticism alleging the body overlooked a Latino board member in line for the president’s chair.

The move comes after prominent local politicians denounced the school board’s decision to elevate longtime member Diana Craighead to the position of president even though Juan Benitez, who was then serving as vice president, would have typically been next in line for the role.

The controversy stems from a July 20 meeting where Kerr advocated for Benitez to become president, but her motion did not find a second. Instead, Board Member Jon Meyer nominated Craighead, who was then voted unanimously into the position. Craighead nominated Kerr for vice president, a nomination that also brought a unanimous vote.

Kerr later said she was “deeply disappointed” by her colleagues decision to back Craighead instead of Benitez. The move was noteworthy, in part, because it came after a three-hour board meeting that was largely about racial equity in the school district and the position of president is typically rotated among board members with the vice president usually being next in line. 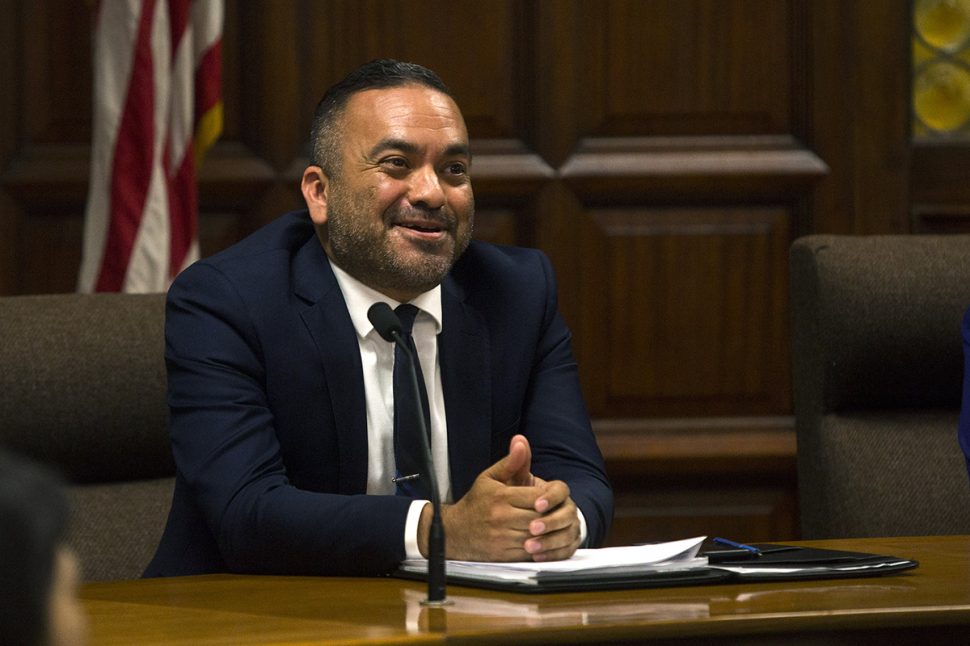 Juan Benitez smiles after joining the LBUSD school board on Monday, July 16, 2018. Photo by Drew A. Kelley, Contributing Photographer.

The LBUSD board is mostly white, but Benitez, who is Latino, has been credited with being an outspoken voice for racial and economic equity in a school district that is largely Hispanic.

Mayor Robert Garcia, state Sen. Lena Gonzalez, and several other Latino community leaders signed onto a letter criticizing the move to pass over Benitez. Notably, Benitez’s opponents when he won the board seat in 2018 have also come to his defense.

“The board is retaliating against Dr. Benitez for publicly highlighting LBUSD’s shortcomings and for engaging Black, Cambodian, Latinx and additional communities to expose institutional racism, including a focus on anti-Black racism, within the school District,” former candidates Eduardo Lara and Cesar Armendariz wrote. “Dr. Benitez was bypassed as board President for his unapologetic commitment to engage diverse communities in ways LBUSD leadership considered to be unconventional and unacceptable.”

School board members said the decision was about experience.

Craighead, Meyer and Board Member Felton Williams all defended the vote, saying it was based on Craighead’s seniority on the board.

With Craighead already the president, Kerr resigning the vice president spot, and Williams and Meyer both set to retire, it’s a virtual certainty that Benitez will now be elected vice president at Wednesday’s meeting.