This week’s numbers represent a 165% increase over the prior week, with alarm over the particularly sharp rise in infections among Black residents.

Between June 3 and July 3, the two-week case rate, adjusted for age, rose from 39 to 97 per 100,000 residents, respectively, for the Black community. It rose for all other groups as well, but not as dramatically. 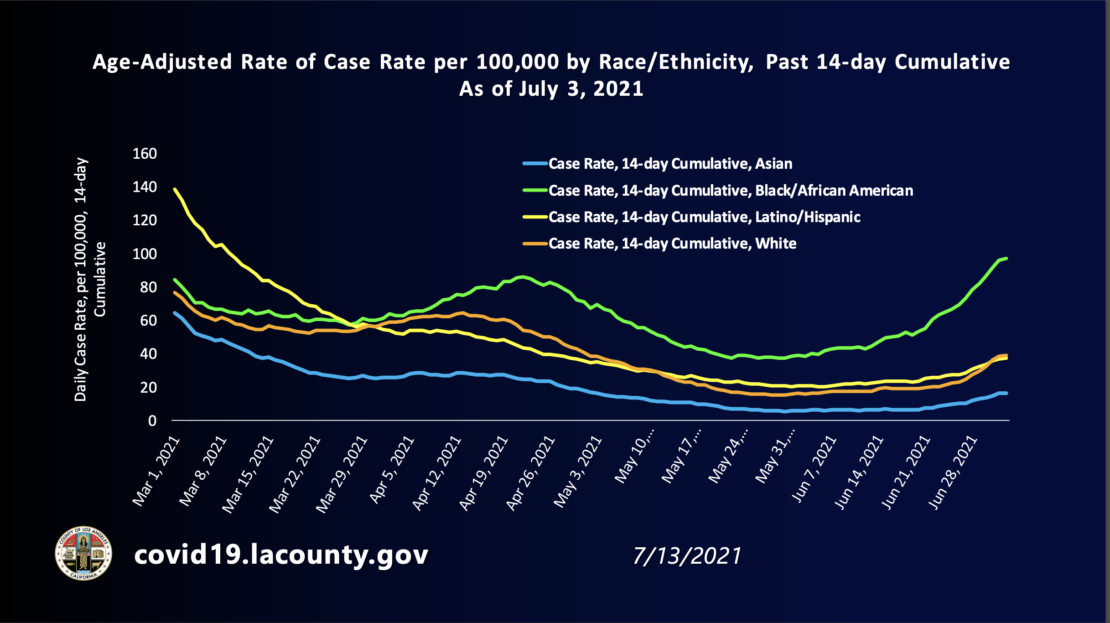 Case rates per 100,000 in Los Angeles County for Black residents are much higher than other groups.

Deaths remain low for all groups, but mortality is a “lagging indicator,” meaning these numbers may not begin to rise for a month or longer, Dr. Muntu Davis, the county health officer, told the Board of Supervisors on Tuesday.

The county on Tuesday reported a daily case rate of 4.8 per 100,000 residents, and a testing positivity rate of 2.9%—more than double what it was on June 15, the day the state lifted most of COVID-19 restrictions.

The Long Beach Health Department on Tuesday reported its case rate was 5.2 cases per 100,000 residents, a significant rise from just last Thursday, when it was 4.4 cases. The city’s positivity rate rose from 2.9% last week to 3.2% on Tuesday.

Health officials attribute the rise in cases to factors including the loosened health restrictions, the July 4 holiday when many people—particularly those who are young and unvaccinated—gathered in large groups, and the rise of the delta variant, which is thought to be more contagious and powerful than other strains of the virus.

Dr. Christine Ghaly, director of the county Department of Health Services, said 100% of hospitalizations for COVID-19 in county facilities are among the unvaccinated.

Nurses, doctors and staff are very frustrated, she said, “because at this point, this is really a preventable illness.”

Supervisor Sheila Kuehl, who represents the West Los Angeles area and San Fernando Valley, said those who still refuse to get the vaccine are “enormously selfish.”

“We can’t rely on herd immunity if the herd won’t get their shots,” she said. 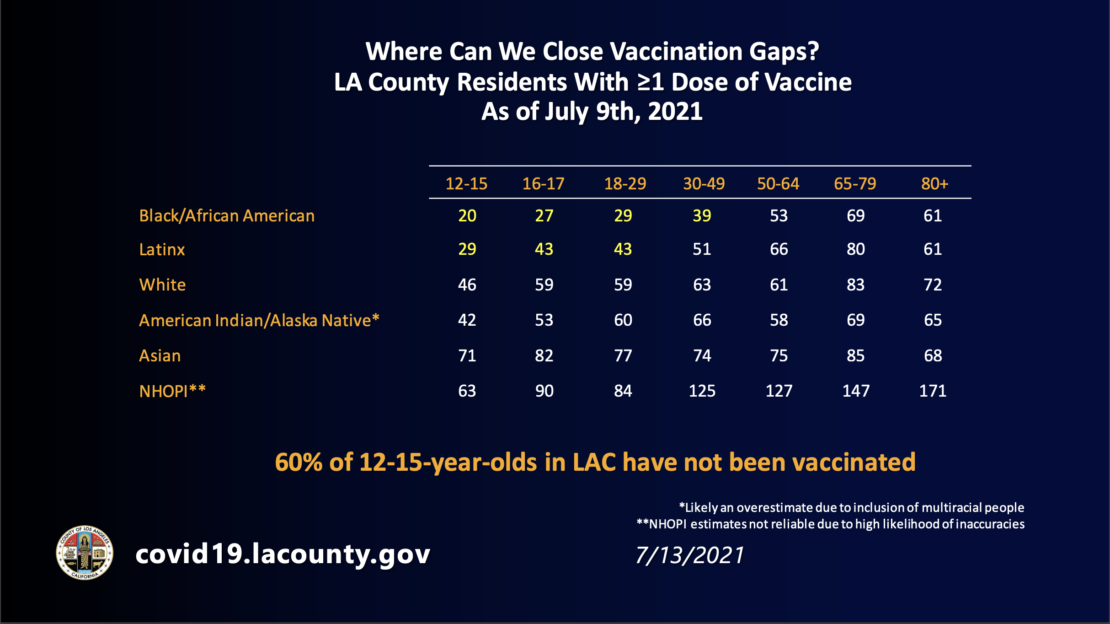 Vaccinations are lagging especially among young people across all racial groups in the county, as well as in the Black and Latino communities.

Officials have offered a range of incentives, with a community group in Long Beach most recently even offering a free cannabis joint at an event on July 24 in North Long Beach.

The county, for its part, announced a new pilot program Tuesday that will deliver shots directly to people’s homes. The program will start in East Los Angeles, where vaccination rates are low, Davis said.

Editor’s note: This story has been updated to reflect Tuesday’s numbers in Long Beach.