Investigators are still working to determine the cause of the explosion that destroyed an Ohio Avenue home in Signal Hill, but they suspect it might be a methane leak, according to a Los Angeles County Fire Department official.

The explosion rocked the neighborhood the evening of Nov. 5. It blew out every window of the home where it happened, cracked the structure and virtually gutted it. The two people inside both narrowly escaped with minor injuries, according to the homeowner. The house next door was also severely damaged by the blast, which authorities initially attributed to a natural gas explosion.

On Friday, Capt. Steve Sparks, from the Los Angeles County Fire Department arson unit, said the house is still red-tagged, meaning it’s uninhabitable and dangerous to be inside, so the investigation is limited so far.

“We only got about 15 minutes at the residence before the readings were so high that it was unsafe and we had to close it back up,” Sparks said. 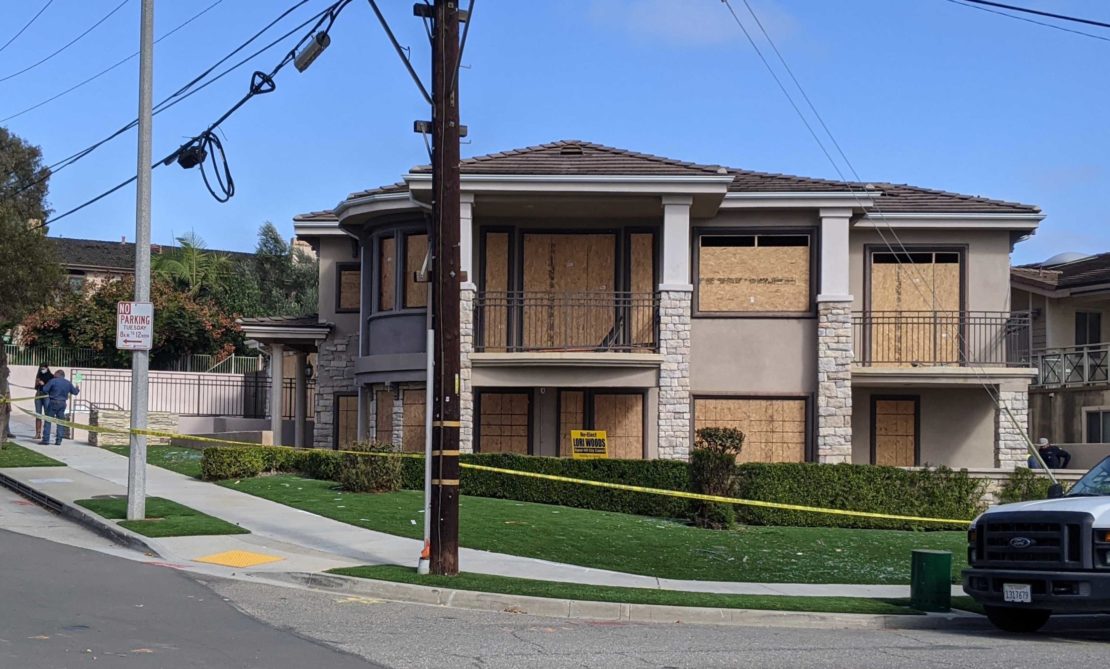 A home on 2100 Ohio Avenue in Signal Hill is boarded up after an explosion blew out the windows on Nov. 5, 2020. The front porch remains strewn with debris. Photo by Valerie Osier.

While investigators think it’s a methane leak, no one has confirmed that or determined a possible source of the gas, he said. His team is waiting for it to be safe to conduct an investigation at the home, but it’s not clear how long it will take for the methane to dissipate, especially if they don’t know where it’s coming from. The county hazardous materials team is also investigating.

Sparks’ team also checked nearby homes for methane and found the readings there were at zero, he said.

The methane could be from abandoned oil wells under the home or nearby oil fields, Sparks said, but he noted that with new building codes, there’s less of a chance there is an oil well underneath the home. The house sits across from an oil field with active and inactive oil wells leased by Signal Hill Petroleum, Shell and other individuals, according to the California Geologic Energy Management Division.

The homeowner, Kumar Barot, said that he and his family had smelled something like gas or oil for months before the explosion and called Signal Hill Petroleum and the gas department in Long Beach to investigate. They both came out two weeks prior to the blast but couldn’t find the source of the problem.

Methane by itself is odorless, but depending on the amount and what it’s mixed with, it can smell like sewer gas or natural gas. In large quantities, methane is highly flammable and anything from static electricity to a stove to a water-heater pilot light could’ve triggered the explosion, Sparks said.

The day after the explosion, workers from Signal Hill Petroleum were taking readings of naturally occurring gas under the street.

“They got mixed readings, but nothing catastrophic at that point,” spokeswoman Alex Rothwell said.

The company is cooperating with all the agencies that are investigating, which include the Long Beach gas department, the county, the city of Signal Hill and insurance companies. Rothwell said she did not immediately have much information to share about the investigation because other agencies are taking the lead.

A spokesperson for the city of Signal Hill could not be reached Friday, as they are furloughed.