A 13-year-old boy is recovering after being struck in a hit-and-run crash while riding his bike Friday night. His family is seeking help from the public to identify the person behind the wheel.

Officers responded to the area of Conant Street and Faculty Avenue at approximately 6:05 p.m. on Friday, Jan. 28 regarding an injury hit-and-run traffic collision involving a black sedan and a bicyclist, according to the Long Beach police department.

Aaron Robbins, 13, was riding his bike with two friends traveling westbound on Conant Street when a black sedan driving erratically struck him from behind, hurtling him over the hood, according to his parents. The driver dragged the boy’s bike underneath the vehicle and fled the scene before officers could arrive, his family said. His friends said that vehicle was the only one on the road.

“We want this person to be held responsible for what they’ve done,” said the boy’s mother, Anja Robbins. “We understand that accidents happen but we need this person to stand up and take responsibility.”

Aaron was transported to the Long Beach Memorial Emergency Department to treat injuries including a second-degree burn to his right cheek from where he landed on the pavement, a dislocated rib and bruises and scrapes all over his body. 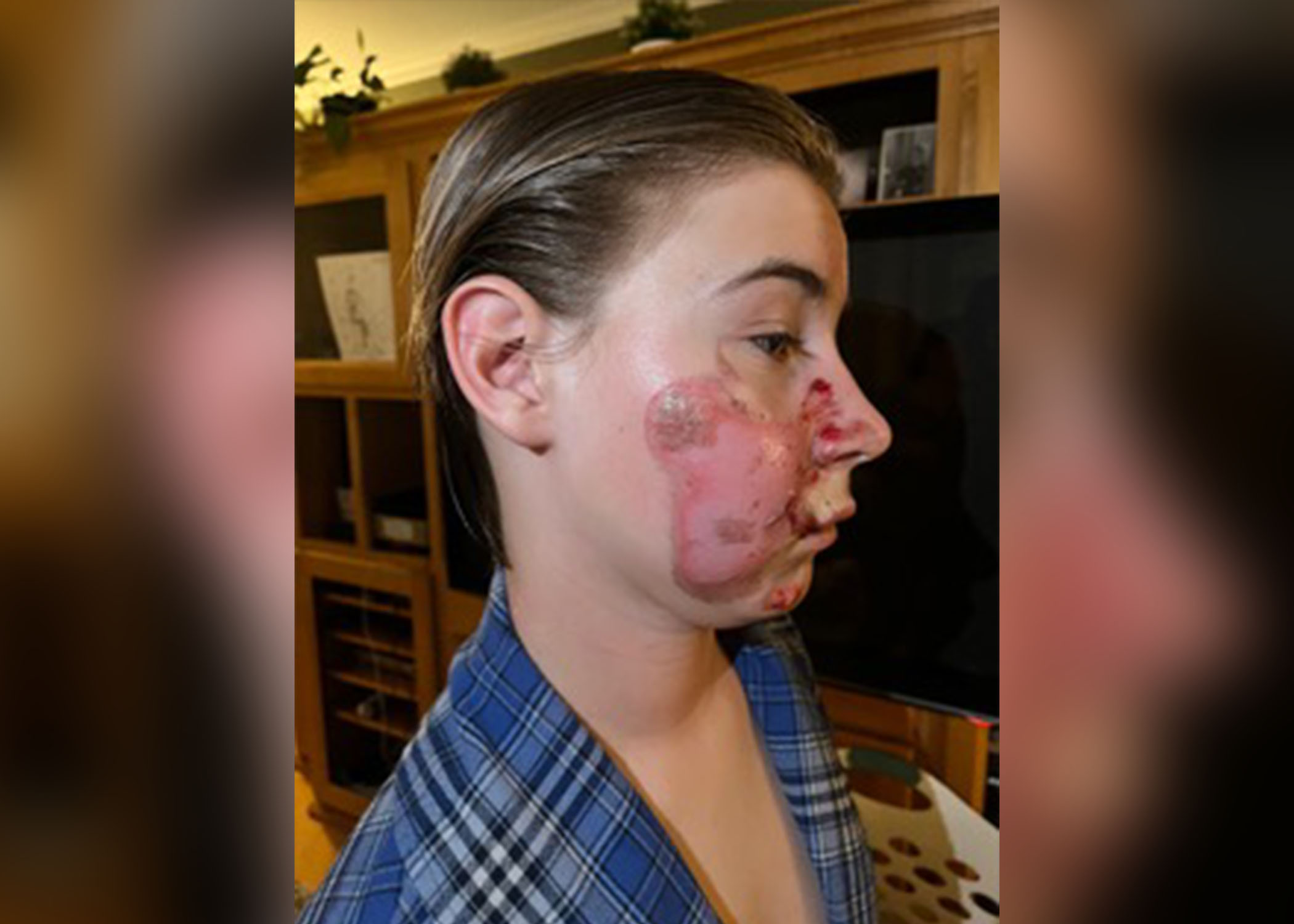 Aaron Robbins, 13, after the Jan. 28 hit-and-run collision in the area of Conant Street and Faculty Avenue. Photo courtesy Anja Robbins

In the days following the crash, the boy’s family traveled to local businesses near the scene to ask to view their security footage in an attempt to piece together the vehicle’s license plate number or to get a closer look at the driver. According to the family, the driver was seen pulling into the parking lot of a Mercedes-Benz dealership on Lakewood Boulevard to try and dislodge the bicycle from underneath.

“The grainy video footage is not enough for detectives to have a clear lead,” said Alan Robbins, the boy’s father.

The family has been sharing their story on apps like Nextdoor and Facebook in hopes that members of the community will come together to identify the driver. Many have shared accounts that they saw a vehicle driving by with sparks underneath it, presumably due to dragging the bike on the road.

The morning after the crash, Alan surveyed the area where Aaron was hit and saw a broken bike pedal, pieces of rubber from the bike’s tire and leather from the seat, he said.

He also noted that there was no designated bike lane.

“Our children aren’t safe,” said Alan. “We were very lucky.” 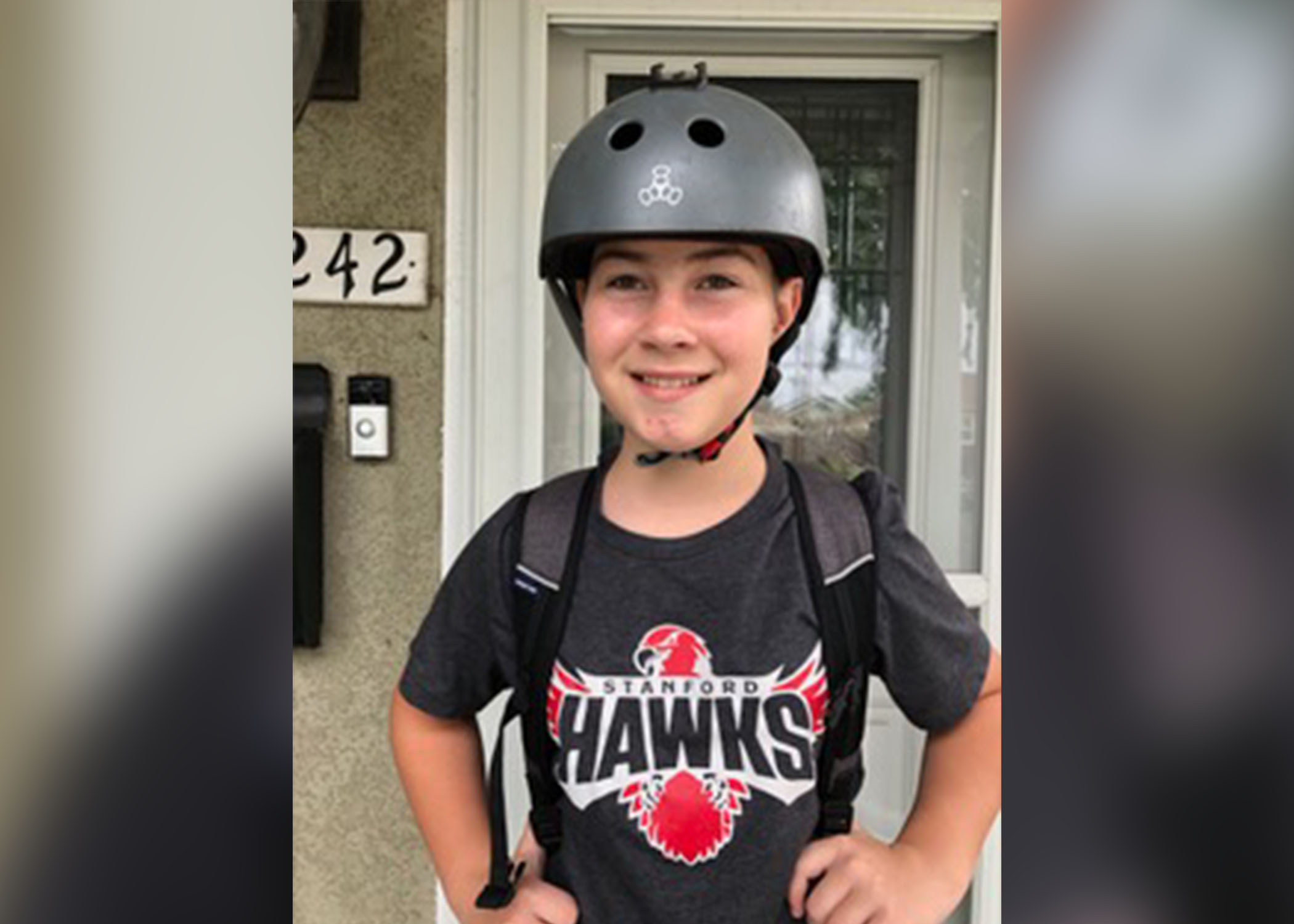 Aaron Robbins, 13, before the Jan. 28 hit-and-run collision in the area of Conant Street and Faculty Avenue. Photo courtesy Anja Robbins

Aaron was encouraged to return to school at Stanford Middle School on Wednesday to be surrounded by his peers and minimize the PTSD from the crash, said his family. The family says they have received an outpouring of love from friends and relatives.

Aaron assured his mother that he would get back on a bicycle again. “He’s a tough kid,” she said.

Anyone who has information regarding the incident is asked to contact the LBPD Collision Investigations Detail at 562-570-7355. Anonymous tips may be submitted through Crime Stoppers by calling 1-800-222-TIPS, downloading the P3 Tips app or visiting lacrimestoppers.org.

Editor’s note: The headline of this story has been corrected to show the crash happened in Long Beach, not Lakewood. Additionally, it’s been updated to correct the spelling of Aaron Robbins’ last name.