There are a few homes for sale at more than $3 million scattered about in Belmont Heights, the more dignified and mature cousin of rowdy Belmont Shore, and all of them are, of course, majestic and spacious, generally designed in the Mediterranean Revival style, which includes the architectural schools of those countries that bordered that sea: Spanish Colonial, Italian Renaissance and French Colonial among them. The neighborhood is an atlas of European architecture.

The most interesting home, if not the one I’d buy if I had the sort of money to even insert myself into the conversation, that’s currently for sale in the neighborhood is at 275 Granada Ave., in the Heights’ Estates section where the houses are the grandest and most elegant. 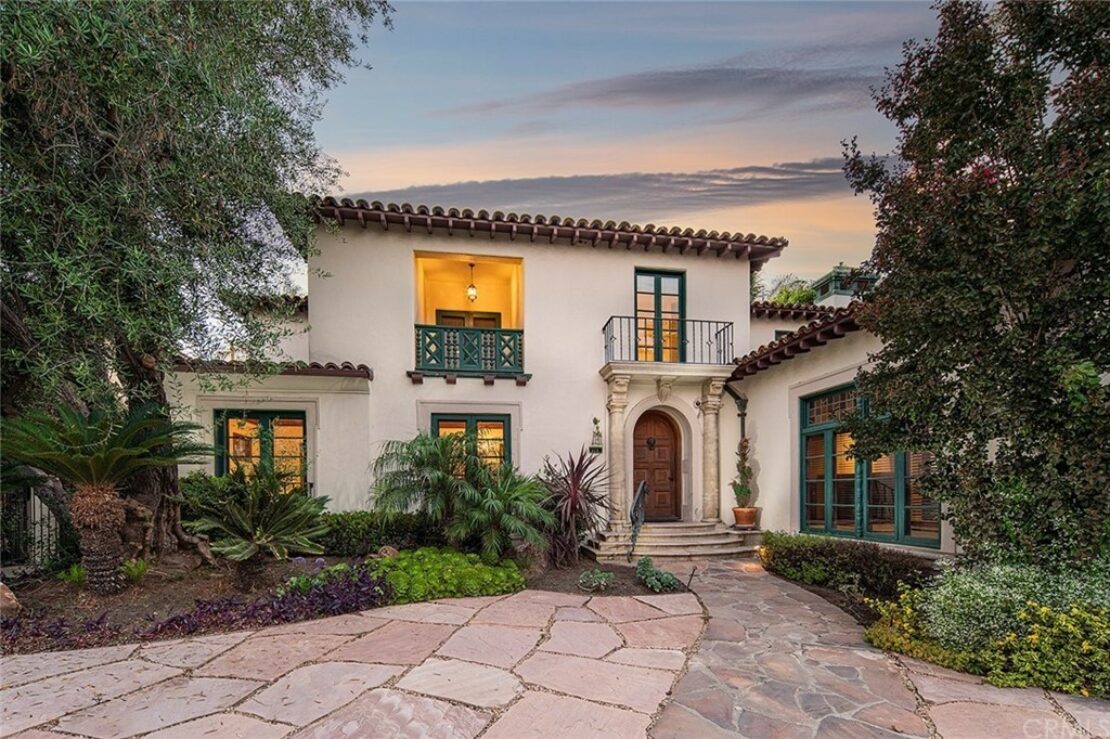 Listed by Realtor Ben Fisher at $3.3 million, the home is the former residence of the Cal State University Chancellor, most recently Timothy White, who moved out of the home in 2018 when the CSU decided to no longer pay for the upkeep of the residence and instead gives its Chancellor, now Joseph I. Castro, a housing stipend of about $95,000 per year to live wherever they choose.

It was purchased in 1991 for then-Chancellor Barry Munitz. Prior to that, the Chancellor’s residence was a perhaps overly opulent mansion in Bel Air that the CSU Trustees deemed way too expensive to maintain as well as too far away from the CSU headquarters in Long Beach. Before purchasing the estate in Belmont Heights, Munitz had wanted to make his home in Palos Verdes—until he got stuck in a 45-minute traffic jam on the Vincent Thomas Bridge when trustee Jim Gray was accompanying him to house-hunt on the  PV Peninsula.

The five-bedroom, six-bath, 4,671-square-foot Spanish Revival home was built in 1930 for Eugene Tincher, who attended Long Beach High School (a precursor to Poly High) before graduating from Stanford Law and opening his Long Beach law office in 1915.

Though he had enough to keep him busy with his successful law practice, Tincher was active in civic affairs as well as city government. In the days when Long Beach had a commission form of government, Tincher was commissioner of public affairs from 1917 to 1921 and he served for years on the school board, and was president of the board seven times, a feat that likely prompted the school district to name a school for him in 1955 in East Long Beach.

The CSU trustees purchased the house in 1991 for $1.2 million, using the proceeds from the Bel Air sale to buy and maintain it.

At the time, the 60-year home needed a makeover: Its kitchen was too small for modern appliances and the dining room couldn’t handle seating the 24 trustees. Besides enlarging those portions of the house, the home had to be brought up to ADA standards, and wiring and lighting was replaced.

The home’s current owner bought the house from CSU for a bit over $2.5 million and it has sat vacant, though maintained, until now.

The location is beautiful, perched at the height of the Heights and built just as the area was beginning to take off as a desirable neighborhood for the wealthier citizens of Long Beach. 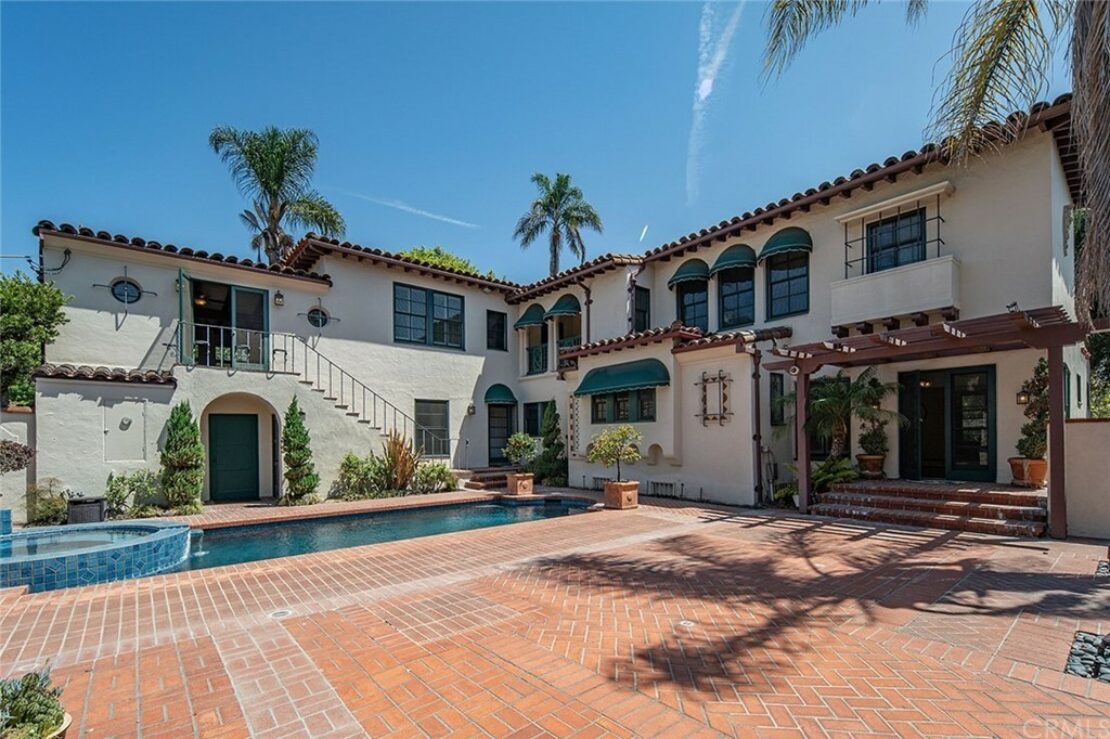 The courtyard and pool at 275 Granada Ave. Listing photo.

The Spanish style is highly evident on the exterior of this home, though there are some jarring effects from the perhaps overly modern touches installed in recent years, including the swimming pool in the courtyard, which is fine, except for a 21st century spa tacked on, and at least one of the bathrooms suffers from an overuse of dark green marble, a decorating trend that deserves to die soon.

Still, there’s a lot to be appreciated in this 1930s home—mostly things that weren’t overly “improved” such as a multitude of cunning built-in cabinets and drawers, exposed wood-beam ceilings, a butler’s pantry, a brilliant winding staircase and French doors in the formal dining room that open to the residence’s front garden and side patio.

Another home in the Heights

It’s too late to help you now, because there’s already a pending sale on another Spanish Colonial Revival hacienda, again built in 1930, on the corner of Vista Street and St. Joseph Avenue at 274 St. Joseph Ave., where the buyer is getting perhaps a nicer, though slightly smaller (by about 300 square feet) home for potentially a lot less money—it was listed at $2.1 million by Realtor Steve Nader of Compass. 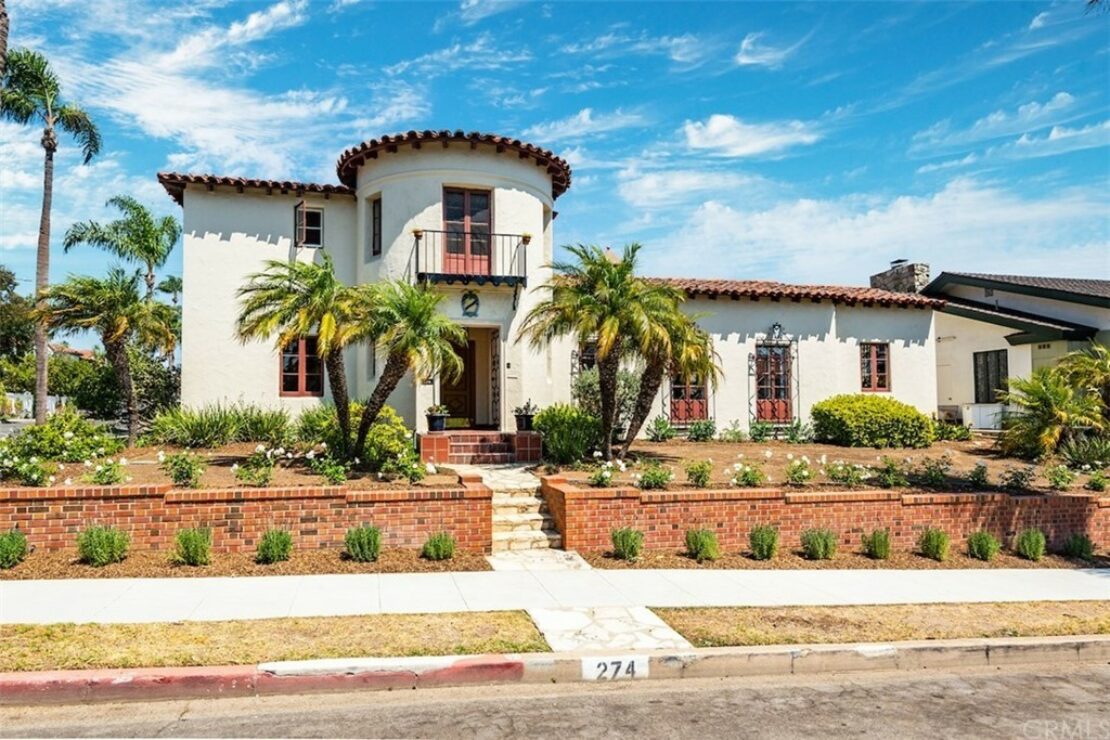 The Spanish Colonial Revival home on St. Joseph Avenue is in escrow. Its list price was $2.1 million. Listing photo.

The house is on a lot every bit as nice, if not more so, as its cousin on Granada, just a couple of blocks to the east, and its architecture is just as stunning, thanks to the fine work of the Downtown Long Beach architectural firm Dedrick & Bobbe, who also designed the Art Deco eight-story Barker Brothers building that stood at 141 E. Broadway for more than 60 years before it was demolished in 1994 because no one was willing to pay the money to bring it up to seismic standards.

The owners of the St. Joseph property have carefully maintained and preserved the home without oven-modernizing the Spanish style. There is a cavernous Great Room with hand-painted beams on its vaulted ceiling, lots of handsome wrought-iron work on the staircase and entryways and s Spanish palette of colors is splashed everywhere, most noticeably in the striking kitchen and bathrooms, where bright yellows, greens, blues, turquoise and orange/pink are used to surprising and inventive effect with ceramic tile walls and countertops, trimmed nicely with mosaic tiles. 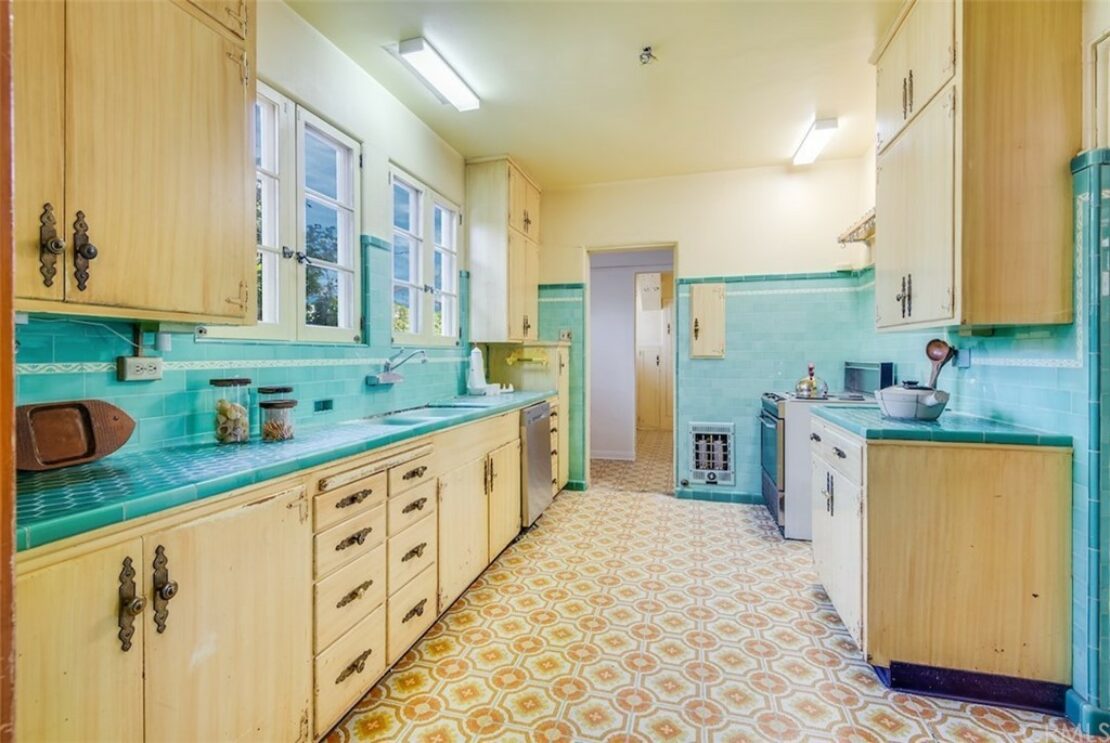 The bright and colorful kitchen at the home on St. Joseph Avenue. Listing photo.

I suppose it comes down to personal taste and the contents of your bank account as to which house you’d prefer, but, at any rate, only one’s still on the market, so that should make your decision easier.