Ernestia Gardner pushed her stroller as she followed behind her her 4-year-old daughter who was playing with paint and toys during an outdoor block party at MacArthur Park Saturday afternoon.

Two rows of tents were lined up near the park’s community center where volunteers handed out bags with food and information on health programs.

“I’m really happy,” Gardner said in Spanish. “They give out free meals and I discover new programs that are offered in the city.”

The gathering of local residents also allowed for the city’s health department to encourage vaccines against COVID-19. 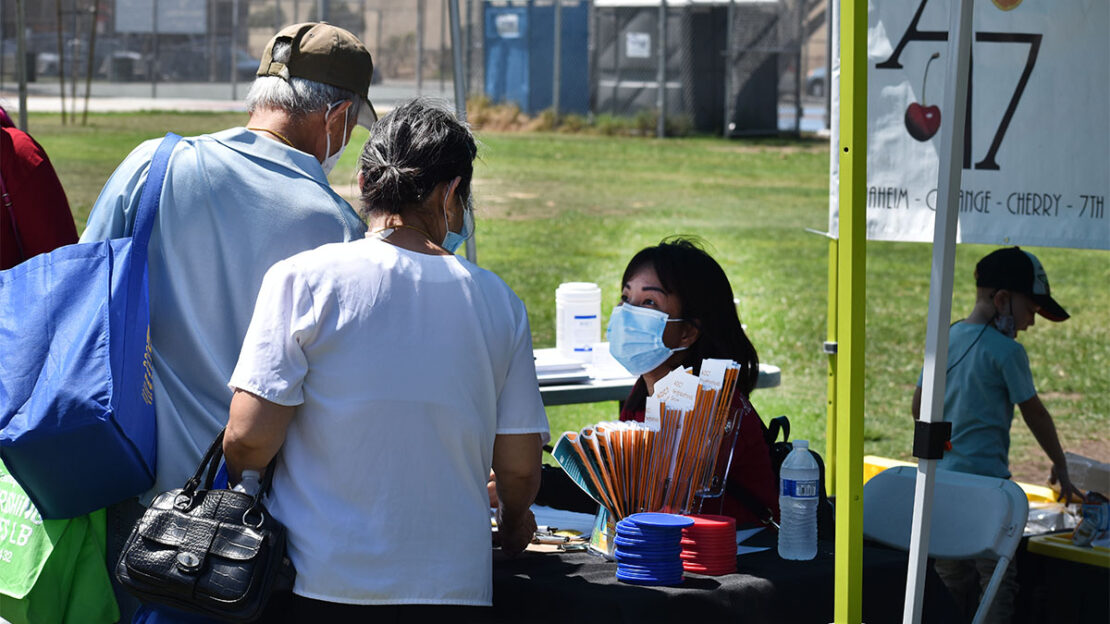 Local residents chat with an organizer at a community block party at MacArthur Park on Saturday, Aug. 28, 2021. Photo by Sebastian Echeverry.

Mary Simmons, board member for the AOC7 community group in Central Long Beach, said a majority of the organizations that hosted the block party are members the Long Beach Advancing Peace committee, which works to reduce gun violence in underserved communities.

Some key local organizations include the United Cambodian Community, the Washington Neighborhood Association and Centro CHA.

Saturday’s event at MacArthur Park was the third block party to have taken place so far.

“We went into the neighborhoods with the highest gun violence and most underserved,” Simmons said.

The event allowed community-based nonprofits to take on multiple issues at once including COVID-19 and gun violence.

Alongside booths for mental health and childhood-development counseling programs, there were COVID-19  vaccination forms where people who signed up for a shot were given gift cards.

The block parties typically run from 11 a.m. to 2 p.m. The next event will take place in North Long Beach at Coolidge Park on Sept. 11.

Where to get food resources and other help in Long Beach